Restaurants, Japanese Lower East Side
3 out of 5 stars 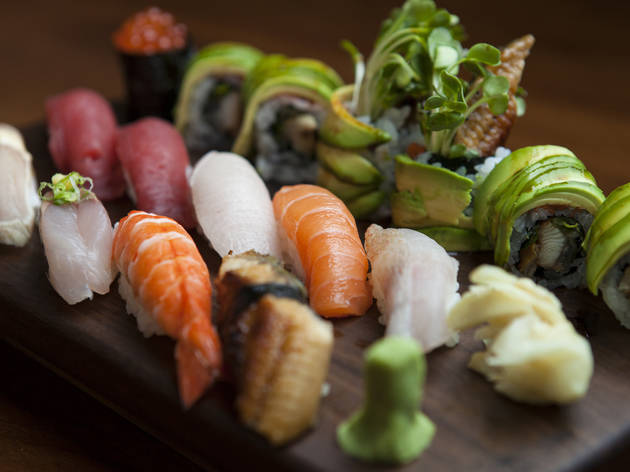 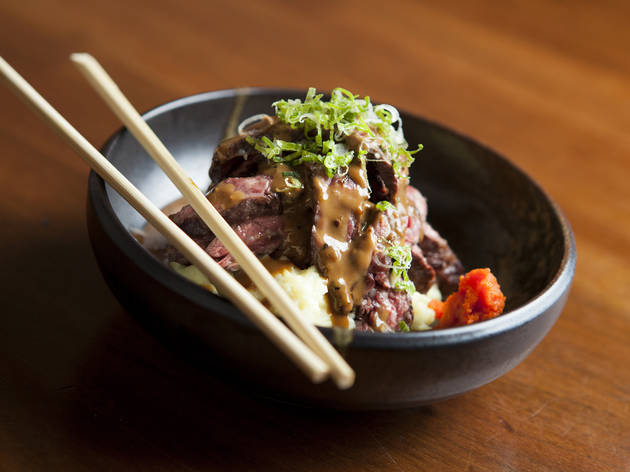 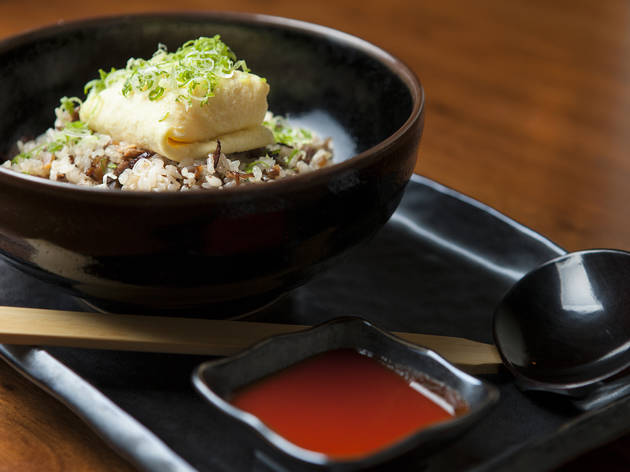 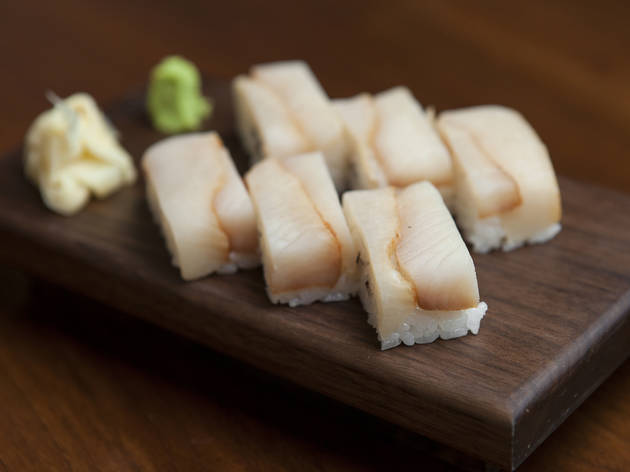 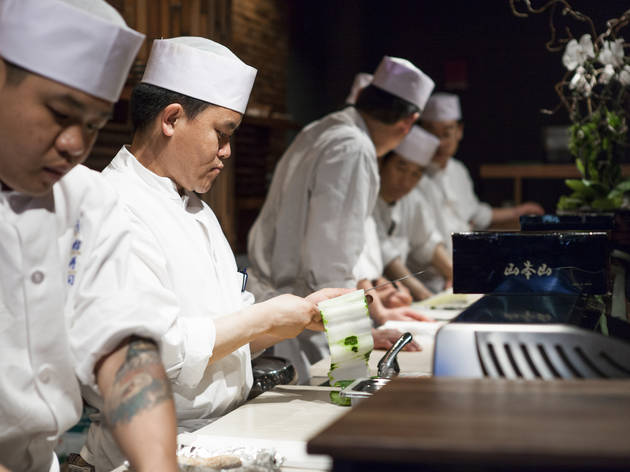 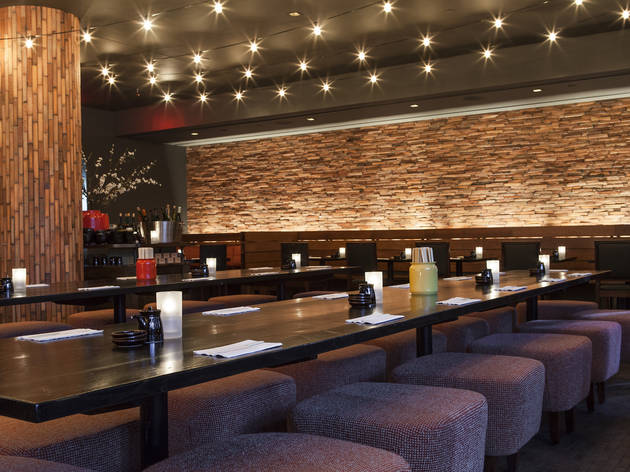 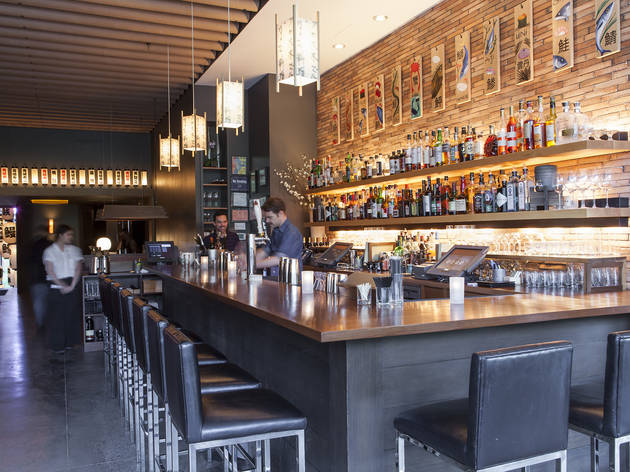 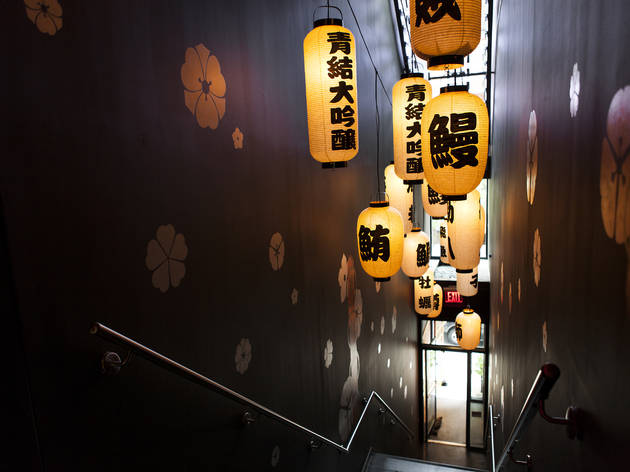 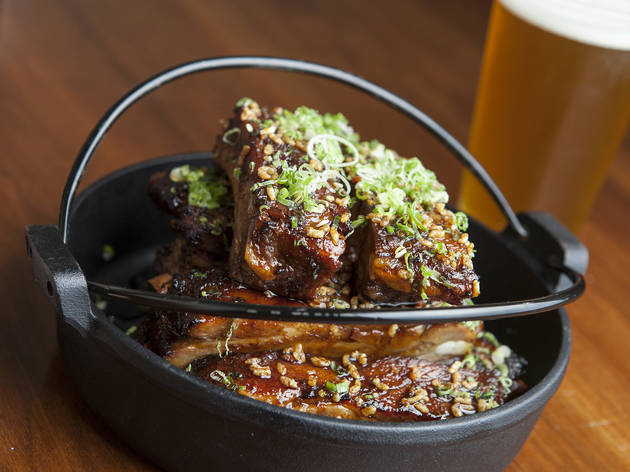 There was a time, not so long ago, when Japanese restaurants were New York’s most incendiary: Back when Matsuri and Megu first drew young scenesters, and Nobu and BondSt were the hardest reservations in town. The new Blue Ribbon Sushi Izakaya recalls that cool Nipponese heyday—circa 2005—with a nightclub vibe and drinking food you’d be happy to eat sober.

The restaurant, which replaced Susur Lee’s dead-on-arrival Toronto import, Shang, in the Lower East Side’s Thompson Hotel, features a hushed entry through a narrow staircase lit with paper lanterns. At the top there’s a bar facing cozy red booths, next to a dining room mostly hidden from view. An inviting buzz waits past the host stand, the lounge music soundtrack softened inside by rough-textured brick walls.

You won’t need connections, or even stylish threads, to score entry to that inner sanctum, though a reservation might help. Blue Ribbon restaurants endure by cultivating an air of exclusivity while remaining, in fact, wide open to all. The whole staff announces your arrival as you slip through the curtains, with a choral greeting we don’t hear much in Japanese spots anymore.

This deluxe izakaya—or Japanese gastropub—combines elements from throughout the Blue Ribbon empire, featuring a menu as vast and eclectic as the original night-owl Blue Ribbons a few blocks away. Brothers Bruce and Eric Bromberg have joined forces once again with raw-fish maestro Toshi Ueki, a partner here and in their sushi spot in Soho. The three traveled together to Tokyo last year, collecting ideas for this latest endeavor.

Their new East-West collaboration features traditional Japanese  fare—kushiyaki skewers and big platters of sushi—along with more unconventional comfort-food mash-ups. The Brombergs’ famous fried chicken is here among the shareable plates, as succulent as ever, but with an umami kick to the crust from the togarashi inside (and a sinus-clearing dose of wasabi in the accompanying honey). Silky smooth chicken liver mousse is enriched with butter, cream, sake and miso—and served with sweet toasted challah from Blue Ribbon Bakery.

This is a menu built, in the classic Blue Ribbon vein, for easy indulgence—ideal for those times when you want to treat yourself right without thinking too hard about the food on your plate. You can mix and match highbrow and low here, as off-duty chefs often like to, scarfing down toro tartare with caviar, say, alongside more down-and-dirty snacks, like sweet, sticky pork ribs dusted in crispy brown rice. Somewhere in between you’ll find the upscale takes on hearty classics that are another Bromberg trademark, including a whole selection of newfangled fried rice (try the rich and savory oxtail version, topped with a bone marrow omelet). The “Tokyo broil,” a salaryman bowl of meat and potatoes, is someone’s ideal of a home-cooked meal, featuring bias-cut skirt steak and  thick miso gravy atop buttery Japanese sweet-potato mash.

The Blue Ribbon izakaya, which serves its full menu nightly until 2am, is whatever you need it to be, an all-purpose canteen for scratching that Japanese-food itch. Pop in late for shochu shots and small bites; skewers of seared short rib, rock shrimp or spiced mountain yam; miniature bowls of cool hearts of palm in soy-sesame dressing or ponzu-sauced leeks. The sushi bar is impressive too, its white-capped brigade serving compact rolls and top-shelf raw fish pressed onto warm vinegared rice. Along with conventional nigiri offerings there are Cubist blocks of “box” sushi, featuring raw and cured fish atop compacted rice (the smoked yellowtail on shiitake rice is a great and unusual combo).

Desserts, on the same high-low jag as everything else, combine all-American nostalgia with Japanese tastes. An old-school banana split, with green-tea and red-bean ice creams, comes topped with hot fudge and a serious mountain of whipped cream. Challah bread pudding with ginger ice cream tastes like super-indulgent French toast.

All of this food is more fun than fussy, which pretty much sums up the Blue Ribbon brand. The Brombergs have mastered the secret to long-term success in New York: make it look easy, and have a good time while you’re at it.

Drink this: Many of the cocktails here play it straight—as they would in Tokyo—including the Stanton, a balanced take on the Boulevardier, mixing Campari and bourbon ($13). Shochu is well represented on the drinks list too, simply chilled or mixed with your choice of effervescent fruit juice (try the super-refreshing Grapefruit-Hi, $12). The long sake list features some unusual bargains, like a cloudy Murai Family Genshu, luscious and creamy at $26 a bottle.

Sit here: The seating choices are as vast as the menu, with options to fit every mood. Grab a stool at the bar for a solo bite, or a booth across from it for a casual tête-à-tête. The communal tables in the dining room are best for a raucous group, though the small tables along the wall will keep you close to the action. And if raw fish is your focus, there are spots at the sushi bar, too.

Conversation piece: The Bromberg brothers, partners and co-chefs, run nine Blue Ribbon restaurants, eight in New York and one in Las Vegas, along with a takeout bakery and the food concession at Brooklyn Bowl. Next up: a stand-alone fried chicken joint, coming soon to New York.