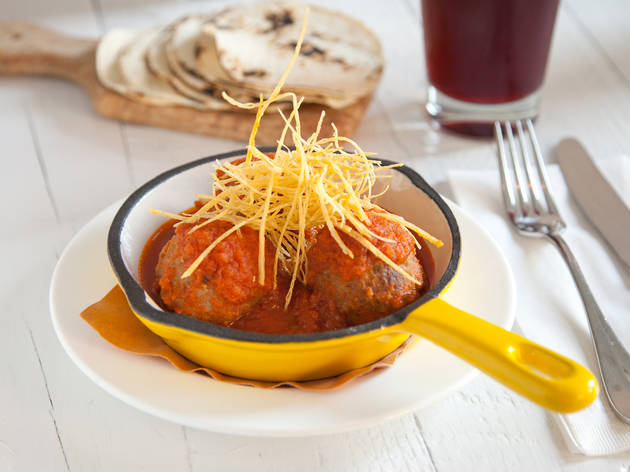 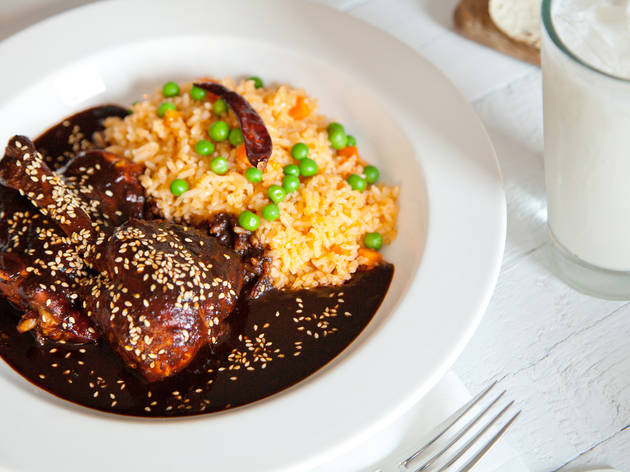 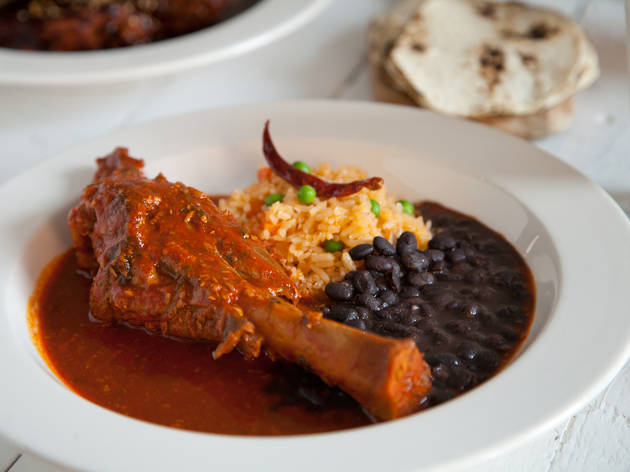 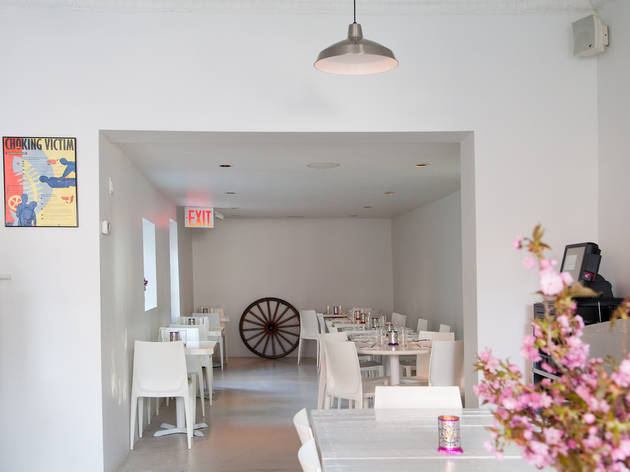 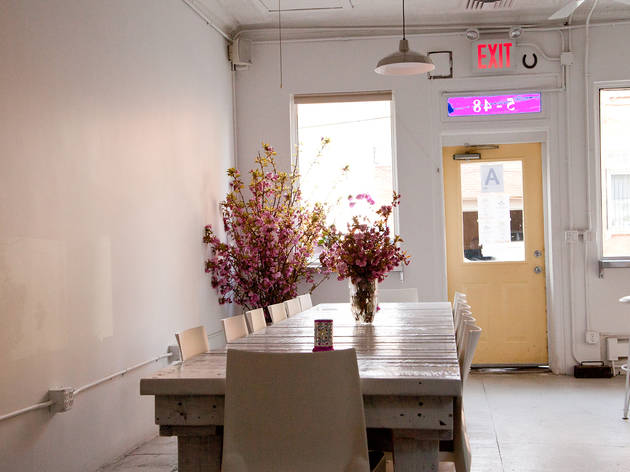 The backstory: The gleaming white dining room suggests a modernist menu, but the food here is a homespun affair. Mexican brothers Cosme and Luis Aguilar teamed up with the owners of Bar Henry to open this small Long Island City eatery in March. Cosme mans the stoves, drawing on his late mother’s traditional recipes from Cintalapa, Chiapas, as well as dishes from Puebla and San Luis, where he also lived. Luis oversees the dining room as GM, and their younger cousin Chantel, a quick-smiling Queens native, serves the tables, bringing a familial warmth that matches Cosme’s soulful regional cooking.

What to order: Start your meal with the beef albondigas ($9)—the short-rib-and-brisket meatballs are fluffy and moist, with a wedge of hard-boiled egg at their center and a pool of a chipotle-spiked roasted tomato sauce below. Sop it up with nutty, warm rounds from Tortillas Piaxtla in Queens. Main courses showcase a wide range of deeply flavored, long-cooked sauces. For the Mole de Piaxtla ($16), Cosme cooks down a spicy paste of five roasted chilies (including guajillo, pasilla and chipotle) with starchy plantains, nuts and earthy cocoa for three hours, and then simmers chicken in the complex stew. In the Chamorro de Borrego ($20), bitter guajes (green seeds from a pod) add a vegetal note to the bright sauce of pulla and guajillo chilies cloaking the braised lamb shanks.

The backstory: The crew behind Hecho en Dumbo burst onto the scene in 2007 with a pop-up housed in the Dumbo General Store, repping the contemporary Mexico City dining scene with accomplished fare and a raucous vibe. When they transplanted the operation to their own space in Manhattan, they had to leave behind the live bands that accompanied dinner on the weekends. But the plan always was to add musical offerings back into the mix, and last October they opened this annex to do just that. Evoking the hip taverns of urban Mexico, Salón Hecho features indie Latin acts, street-food snacks, and tequila and mescal cocktails to complement the full-service mother ship next door. On Thursdays, live musicians, like bluesy norteño crooner Juan Cirerol, take the stage, while local DJs, such as Ursula 1000, spin upbeat Latin disco on the weekends. On other nights, you can find a quiet respite from East Village mayhem at the pretty 50-seat space, which is decked out with colorful work from Mexican graffiti artist Saner and vintage photos of early-20th-century revolutionaries.

What to order: Skip the expensive curados (two-to-four-ounce bottles of infused mescals), which clock in between $17 and $43, and opt for a refreshing michelada ($6) or cocktail. The Esmeralda ($14), a balanced gateway tipple for mescal novices, tempers the smoky, pungent spirit with herbaceous gin and zippy lime juice, plus fragrant basil and sweet cucumber. Chef Danny Mena’s six-item menu offers upmarket takes on Mexico City drunk food. For the Hot Dog Callejero ($4), Mena deep-fries a juicy bacon-wrapped Pat LaFrieda dog, slicks it with a chili aioli, and tops it with fresh chopped tomato and onion. Of the three tasty tortitas (two mini torta sliders for $8), we especially liked the carne asada: tender strips of grilled boneless short rib stuffed in a buttery, toasted brioche bun with creamy bits of avocado, pickled jalapeños and salty queso fresco.

The backstory: Heather Tierney (a former TONY staffer) and her brother Christopher, the duo behind cocktail hot spot Apothéke, opened New York’s first ode to the ancient fermented agave spirit pulque last September. Traditionally, pulquerias were working-class taverns serving the milky namesake slug, which has been brewed since the days of Aztec civilization. But the pair take inspiration for this bar-restaurant from the recent pulqueria revival in Mexico City, where rollicking bohemian versions of the classic watering holes have proved popular with the artsy denizens. Like its sibling bar, Apothéke, next door, this sultry underground canteen, done up with brown straw hatching and turquoise-and-cream tiling, has been drawing downtown partygoers to Chinatown since its Fashion Week opening.

What to order: Despite the modelesque crowd, the spot doesn’t dumb down the menu, offering plenty of grist for adventurous diners, with lesser-known regional dishes and, of course, a spirit not easily found elsewhere in the city. Pulque might challenge uninitiated drinkers—its dominant flavors are the raw vegetal starchiness of an unripe mango and the funky sourness of a lambic. But the menu includes infusions, as well as margaritas, micheladas and other cocktails for those seeking a mellower quaff. We favored the Watermelon Curado ($14), an easy-drinking tropical sipper that balances the raw edge of pulque and smokiness of mescal with fresh fruit juice, the sweet Mexican herb epazote and lime. The chef also works earthy pulque into a few of the dishes, like the soupy Borracho Beans ($9), made with long-stewed pintos, dark beer and fatty bacon. From the sprawling menu, we also liked the Verduras tacos (two for $11), stuffed with sweet strips of poblano peppers, rich mushrooms, and acidic smoked, grilled and poached cactus, as well as the tangy Enchiladas de Jamaica ($19), filled with stewed hibiscus flowers, beets and jicama, blanketed with a tart chipotle sauce and cut with crema and queso fresco.

The backstory: Chef Alex Stupak jarred the food establishment last year when he left a decorated pastry career to open Empellón Taqueria with his wife, Lauren Resler. The West Village joint was shaky at first, but it gained its footing (and a Food & Drink nom for Stupak as Chef of the Year) before its first anniversary. For his sophomore project, which opened in February, the risk-taking toque pulled another ballsy move, opening a tacoless Mexican restaurant and rejecting the country’s most beloved snack for less familiar culinary territory.

What to order: At this East Village restaurant, Stupak’s sophisticated menu offers an impressionistic take on Mexico’s traditional eats, with small plates that showcase classic ingredients in outré compositions. In an one architectural dish, sweet, slow-cooked ruby-red shrimp ($18) are sandwiched with rich uni mousse between upright crisps of nutty masa, and are enlivened with paper-thin slices of jalapeño. In another, tender hunks of lobster are covered in creamy melted Tetilla cheese laced with kol, a Yucatan-style white sauce akin to béchamel, and offset with zippy dollops of habanero-spiked tomato sauce ($19). There’s no reason to miss tacos while digging into a dish of improbably tender rabbit ($27), which is stuffed with meaty shiitakes, bacon and floral poblano peppers and cooked sous vide. The plate takes its cues from Southern biscuits and gravy, with a bright sauce made from cream, cilantro, parsley and a Toluca-style chorizo that gets its green hue from poblanos.

The backstory: There’s no shortage of locavore New American eateries in New York (to wit: Gran Electrica’s sibling restaurant, Colonie, in Brooklyn Heights). But this Dumbo spot may be the city’s first Mexican restaurant to boast a Greenmarket ethos. Chef Sam Richman, a Jean Georges alum who spent months tasting his way through the old country, combines traditional Mexican techniques with top-notch, sustainable ingredients: pasture-raised meats, East Coast seafood, Finger Lakes Farms hothouse tomatoes in the cooler months and red beauties from farmers’ markets in the summer. Brooklynites have been packing into Gran Electrica since it debuted in late March, bringing a youthful buzz to the neighborhood’s sleepy dining scene that’s been missing since Hecho en Dumbo departed for the East Village.

What to order: Meals here are accompanied with a bright quartet of distinctive salsas: the mild ajonjoli, a nutty, fruity puree of sesame seeds, costeno chili and vinegar; a tart tomatillo salsa verde; a fresh gazpacho-like salsa roja; and a fiery, smoky salsa de chile arbol. Taco fiends should opt for the lengua (two for $8). The homemade tortilla is a bit tough, but it’s merely a vehicle for the crisped, seasoned shreds of tongue, which are braised for nine hours, and fresh toppings of chopped onion, cilantro and radish. Equally satisfying are the meaty pork ribs ($18), slathered with a rich, concentrated morita-and-ancho-chili sauce, which is simmered low and slow overnight. Enjoy them while hobnobbing at the bar or ensconced at one of the wood tables tucked into pockets of the dimly lit dining rooms.