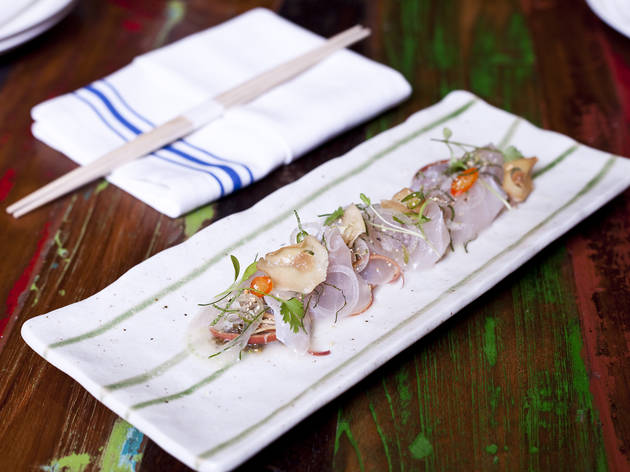 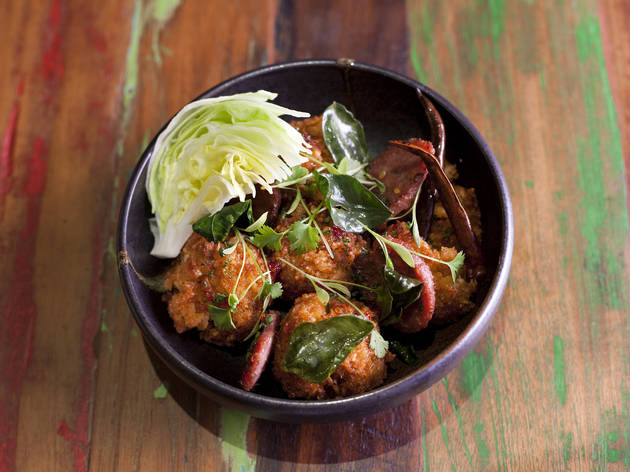 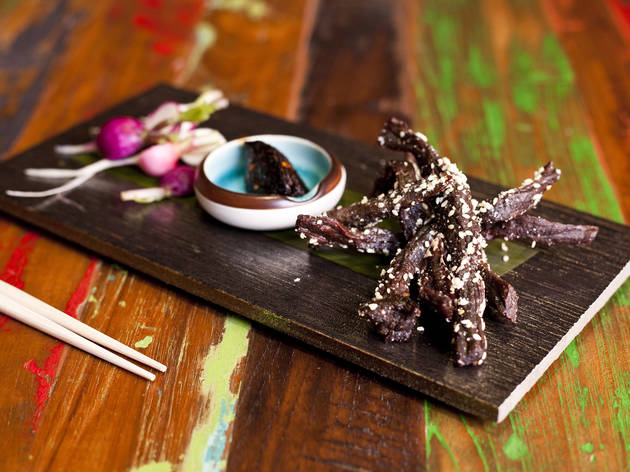 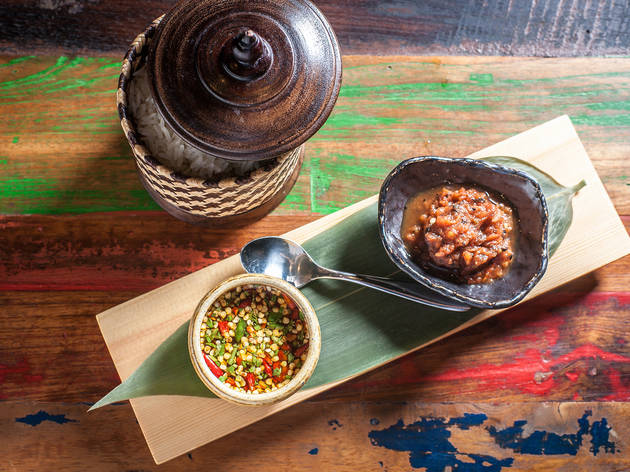 For all the diversity in New York’s rich dining landscape, there remains a small pocket of cuisines that are still hard to come by, one of which being the spice-forward, fish-sauced fare of Laos. Opened in 2013, New York’s first Laotian eatery, Khe-Yo, which translates to “green,” is a collaboration between megawatt chef-owner Marc Forgione (Restaurant Marc Forgione) and his longtime cohort, Soulayphet “Phet” Schwader. Since the 74-seat restaurant’s debut in 2013, the Laotian-born chef Schwader has served as a de facto bannerman for the cooking of his heritage, delivering an upmarket, appeal-to-the-masses take on traditional dishes.

On a recent weeknight, the candle-lit, Radiohead-soundtracked dining room played host to a crush of well-heeled Tribeca couples eyeing each other over while digging into complimentary baskets of sticky rice—the menu invites guests to eat this with their hands—, served with a cooling eggplant dip and the chef’s fiery Thai-chili–laden “bang-bang sauce.” It’s instantly addictive, but calls for a round of fruity, Southeast-Asian–inflected cocktails by bartenders Tenzing Takuri and Jorge Mendez, such as a light and bubbly ginger-tamarind mimosa ($13) and a stiff, Sidecar-riffing cognac number ($15) fortified with blood orange juice and Combier.

That tear-jerking heat is more prevalent in the first half of the simple, 12-item menu, which is divided into a selection of snacky small plates and larger seafood-heavy entrees. From the former, skip the bamboo-ginger quail skewered and served with two astringently bitter stalks of gai lan ($14) and opt instead for the house Creekstone Farms beef jerky, sweet-and-salty slivers of meat dotted with sesame seeds and slicked with a smoked chili sauce ($14). Larger dishes nod to the tradition of family-style meals anchored around whole fish ($49, whole caramelized red snapper; $31 charred king salmon with green curry), while also including familiar alternatives, like a pitch-perfect upgrade to garden-variety pad-see-ew ($36) echoing the sweetness of the thickened soy-based sauce with plump chunks of lobster.

While Schwader deals a bold and colorful hand with his menu, the restaurant’s decor is comparatively neutral. Reclaimed teak tables and chairs fill in the space, which is lined with exposed brick walls, black curtains and a simple wall mural of an elephant that serves as the only ostensible marker of the restaurant’s cultural affiliation. Luckily, It’s a sleek simplicity befitting the neighborhood, and one that leaves a welcome spotlight on the excellent food.