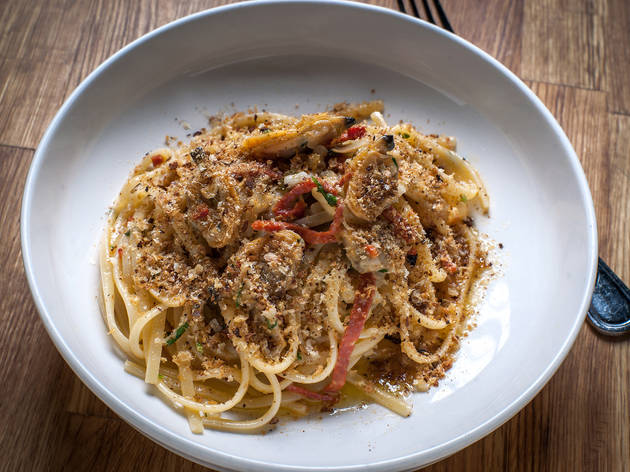 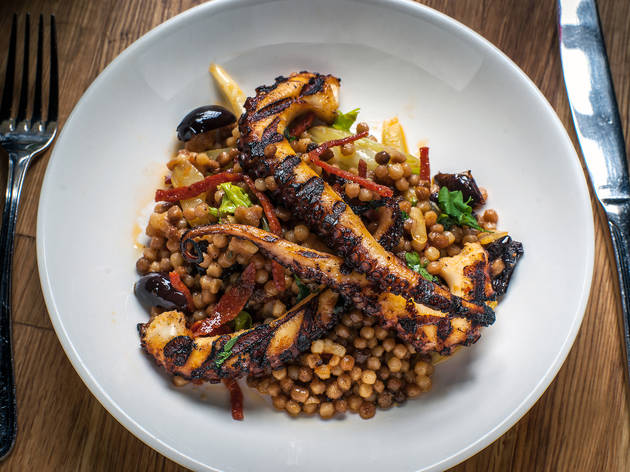 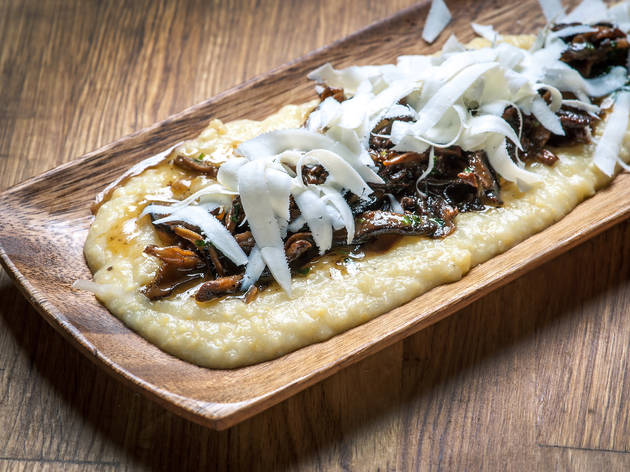 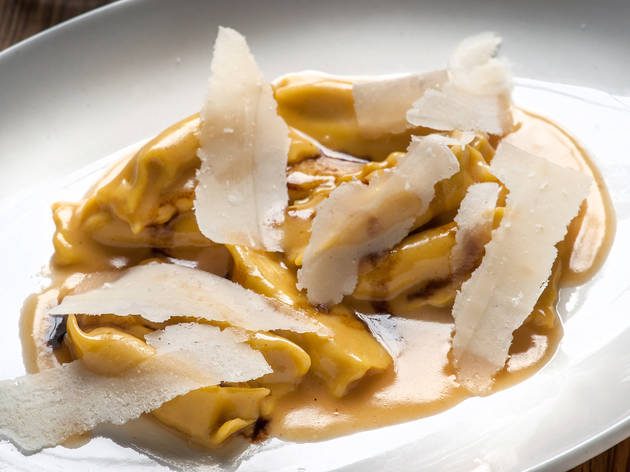 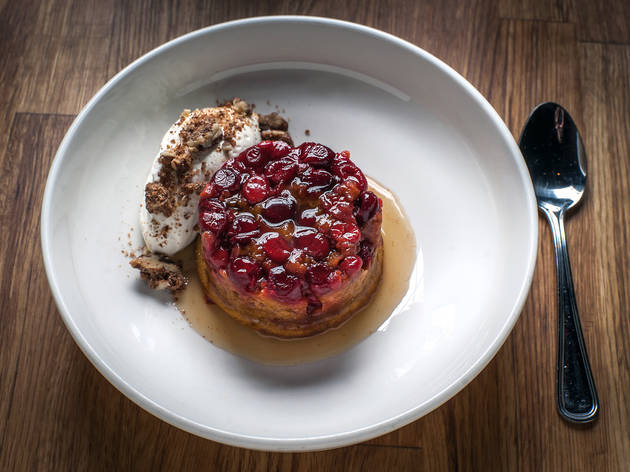 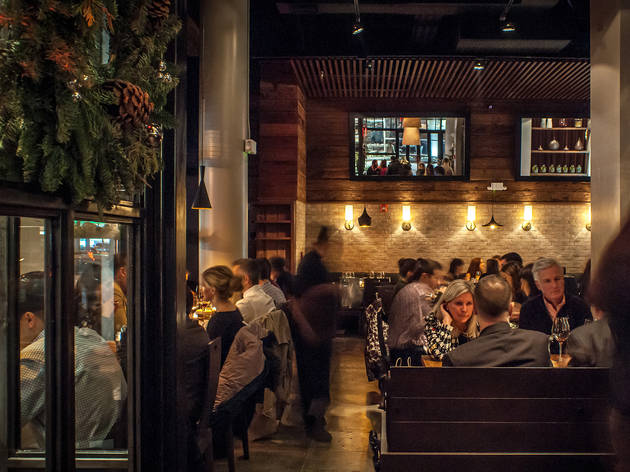 The East Village, once among Manhattan’s scrappier neighborhoods, long ago passed the tipping point, losing its edge to gentrification. Perhaps no stretch embodies its march toward homogeneity quite like 1st Street east of the Bowery, stripped of its punky dive bars and graffiti-scrawled tenements. L’Apicio, the new anchor restaurant of the bland condo complex running the length of the block, is an everyday trattoria to match the apartments upstairs, more spacious than a banker’s loft, with accessible food and an easy vibe.

In their move across town, chef Gabe Thompson and sommelier partner Joe Campanale—the winning team behind West Village hot spots Dell’anima and L’Artusi—have fully graduated from intimate and funky to enormous and sleek. Their glass-facade restaurant might as well be in Battery Park, with its guys in loose ties enjoying solo meals at the bar and furniture-showroom decor—Tom Dixon lamps and plush couches for lounging. Still, Campanale, a young wine world luminary, has amassed a fun, esoteric selection of after-work drinks minus the usual wan pinot grigios and in-your-face cabernets—the bottles and glasses arranged by character, not country.

Thompson’s generous, crowd-pleasing food isn’t chasing trends or setting them, but with its bold, layered flavors, it has enough personality to match that quirky wine list. Instead of the ubiquitous kale or Caesar salad riff, he serves old-school escarole in a light yogurt dressing with toasted almonds, sliced pear and crushed olives, which makes for a terrific palate sparker, hitting bitter, bright, sweet and salty notes. Another punchy starter pairs crisp, meaty charred octopus tentacles with toasted fregola, slivered celery and pepperoni hunks.

With starchy fare at the heart and soul of the place, L’Apicio is the upmarket evolution, really, of the old East Village pasta joints, cheap date spots slinging big bowls of classic shapes and sauces. You’ll pay quite a bit more for Thompson’s rarefied pastas—for his buttery candy-wrapper agnolotti oozing liquified sweetbreads with a syrupy drizzle of real balsamic on top; for his extra-spicy linguine with shredded pepperoni, Calabrian chilies and briny shucked clams. His rich, soupy polenta with a choice of four toppings—try the mixed mushrooms with shaved ricotta salata—is also abundant and gutsy, spread across long planks in the traditional Tuscan spianatora style.

Though the pastas, in main-course portions, are the high point of a meal here, there are substantial proteins, too: simple, solid entrées—home cooking for harried junior executives. A big, juicy pork chop, blackened on the grill, with tart cranberries and roasted sweet potatoes, is flavorful, certainly, but not very exciting. Cod saltimbocca has a bit more zip, the fat, flaky fillet wrapped in crispy speck in an intense shellfish broth floating sliced chorizo.

The seasonal desserts, from pastry chef Katherine Thompson (Gabe’s wife)—warm pumpkin budino with candied pecans, vanilla semifreddo with spiced apple cake—are equally straightforward and fundamentally comforting. L’Apicio, with its vast, glitzy digs, doesn’t look much like a simple neighborhood spot. For the new East Village, though, that’s just what it is.

Drink this: Joe Campanale’s cocktails are as robust as the food. Try the Manhattan in the Fall ($12), a zingy mix of cinnamon-infused rye and Carpano Antica. There are plenty of offbeat finds among the two dozen or so wines by the glass—a mix of Old World and New—including a funky, fruit-forward grignolino (an obscure red Piedmont grape) from Heitz Cellar of Napa ($12) and a vivacious gamay noir from central California’s Edmunds St. John ($13).

Conversation piece: L’Apicio is named for a classic six-volume cookbook written by Roman chef Francesco Leonardo in 1790, a historic survey of Italian cuisine.