Some of the hottest restaurants in the country these days came from the most humble beginnings, sprung from trucks, carts and fleeting pop-ups. San Francisco’s Mission Chinese Food, for example, can trace its roots to a different concept called Mission Street Food. That venture started on four wheels before occupying a cheap Chinese restaurant—a temporary shell that eventually became a permanent home for Mission Chinese Food in 2010. There, behind a run-down facade, head chef Danny Bowien served some of the most interesting food in that restaurant-mad city, blending artisanal ingredients and a nose-to-tail sensibility into a fiery brand of affordable, auteur Chinese cuisine.

Even before he touched down in New York, Bowien had blown up as a national star, his West Coast restaurant breathlessly documented in glossy magazines, travel shows and Twitter feeds. So it follows that when he brought a version of Mission Chinese to New York’s Lower East Side last month, the food cognoscenti were quick to flood the place. To visit the restaurant right now is to witness a cross section of food-world first responders crowding the sidewalk out front—bloggers, editors and off-duty chefs enduring two-hour waits for a table along with everyone else, fueled by the complimentary keg of cheap beer just inside the door.

In fact, the crowd is the only sign that there’s something stirring on this stretch of Orchard Street. The stealthy exterior looks for the world like a tumbledown Chinese takeout joint, with an overhead menu that might as well be hawking frozen egg rolls (it isn’t). Indeed, if not for the restless mob—with iPhones and Instagram feeds in the place of pitchforks and torches—you might stroll right by.

Instead, you’ll want to take a number and summon some patience. When your name is finally called, you’ll be ushered past wok-wielding cooks in the kitchen, into the rear dining room. There, a red-lit dragon winds its way along the ceiling. There are plastic flowers in throwaway vases, and the walls glow purple and pink. It’s a cheap but effective reminder that the emphasis here, as on the Left Coast, is on the food. And damn, is it good.

Bowien’s cooking—bold and original and well worth the wait—features intensely personal spins on a host of Szechuan and Chinese-American classics, with Cantonese, Xi’an and Taiwanese tastes thrown in. To all of this he adds untold layers of flavor and depth.

His ma po tofu features pork shoulder slow-cooked for six hours under seaweed sheets to ramp up the umami, and new dimensions of tongue-numbing heat. Rather than the usual cubed chicken, his kung pao comes with excellent pastrami—smoked in-house over apple and cherry woods. The delicious sweet-salty fried rice is tossed with salt cod, mackerel and sticky Chinese sausage. And instead of the prototypically drab stir-fried beef and broccoli, there are falling-apart slabs of fatty braised brisket with crisp Chinese broccoli and smoked-oyster sauce.

These dishes, in big family-style portions, come to the table fast and furious. Dine with a large group, as you should, and the spread can become quickly overwhelming, particularly if you load up on the spiciest fare. Bowien’s high-octane cooking has daredevil heat that’s sometimes a real challenge to eat. He throws down the gauntlet, burning through mountains of Szechuan peppercorns (in both the green and red varieties), heaps of dried chilies, gallons of chili oil and hot bean paste, building to a climax of ma la intensity (that distinctive Szechuan numb). Can’t handle a little burn with your food? Mission Chinese might not be the restaurant for you.

In fact, there’s not much on the menu that won’t bring sweat to your brow. All you can do is ease into the pain. Kick things off with rice noodle rolls filled with tea-smoked eel, crispy fish skin and ham-hock rillette—or with monkfish liver, rich as foie gras, poached in rice wine and soy. And then prepare for the onslaught.

The chicken wings, buried under an avalanche of dried chilies and tossed with braised and fried tripe , are incendiary but hard to resist, tingly with Szechuan pepper and cumin. There’s a real art to mixing salty, spicy, sweet and sour, as Bowien does here in a complex combo of slab bacon, bitter melon and rice cakes. His sizzling cumin-crusted lamb breast, delivered on a scalding cast-iron plate, is just as nuanced, with its mix of charred dates, pickled chilies, long beans and crispy fried bay leaves.

While many of these flavors are familiar to the growing legions of Szechuan food fans, they’ve never been delivered quite like this. In an increasingly globalized age, when shiso and guanciale are as common as pimento cheese and Maine lobster, it’s about time that the Szechuan peppercorn took its place on the contemporary American plate.

Drink this: Without a full booze license, the cocktails are limited to libations made with shochu or wine, like the Great Northern, a sort of liquored-up Tang mixing sparkling wine and shochu with yuzu and grapefruit. The refreshing house Michelada—a mini Bud Light bottle delivered upside down in a pint glass quarter-filled with smoked clam juice and lime—has a kick of Szechuan pepper and salt on the rim.

Sit here: The stools at the bar and at the handful of high tables just past it are set aside for reservations (email missionresy@gmail.com). The big communal table in the middle of the room is the best in the house, and the only one available for a big banquet group.

Conversation piece: One of the two bathrooms features an homage to Twin Peaks. The cultish series’s hypnotizing theme song is piped in on speakers, and a framed photo of character Laura Palmer hangs on the wall. 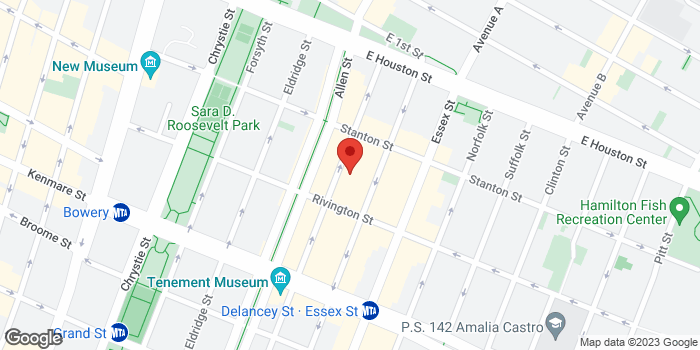