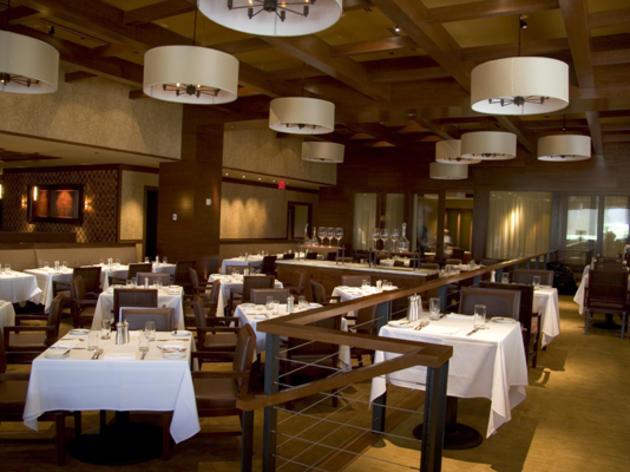 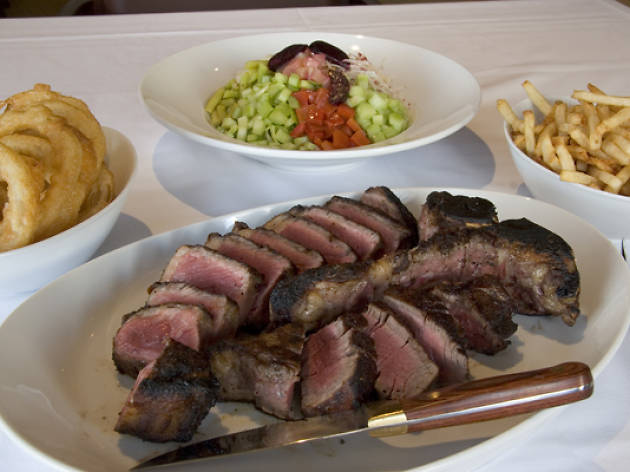 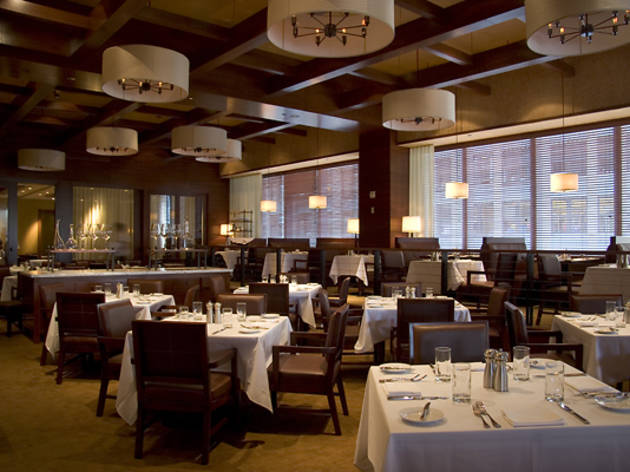 When the Time Warner Center opened in 2004, critics accused of it being nothing more than an upscale mall. But no one could deny that the food court, or as they termed it, “the restaurant collection,” was insanely impressive—chefs Thomas Keller, Masa Takayama and Gray Kunz are legends and diners flocked to their food shrines accordingly. The one exception: Jean-George Vongerichten’s V Steakhouse fizzled after only 18 months. With the launch of Porter House in the former V space, Michael Lomonaco (pictured) is attempting to prove that having a meat haven in a tourist destination isn’t such a bad idea after all. But folks wanna know: Can he really do it better?

If first impressions count, Porter House is an instant improvement based on looks alone. Designer Jeffrey Beers replaced V’s chandeliered, baroque extravagance with a mature-yet-sexy brown-and-tan interior filled with cherrywood walls, leather seating and black-and-white photographs of jazz legends. You can’t help but notice lots of round elements: Large parties sit in circular booths, and circular lamps hang from the ceiling like glowing UFOs. The restaurant’s northeast corner catches a nice Central Park view, though you won’t be able to see much while sitting unless you score a window table.

Lomonaco, despite his veteran status in New York, has much to prove. An alumnus of ‘21’ and Le Cirque, he earned a loyal following at the late, great Windows on the World, but has not held any high-profile gigs since then (unless you count a stint at Guastavino’s). At Porter House, he unveils an expansive steakhouse-and-seafood menu, brimming with extras: six kinds of potatoes, nine vegetable sides, five fish entrées and 19 appetizers, 13 of which focus on seafood. I especially enjoyed the oyster pan-roast starter, featuring mollusks in a sweet toasted tarragon sauce, balanced with flecks of bacon. Portions are more than fair: The seared scallops starter, at $18, could have been an entrée: There were three large scallops on the plate surrounded by capers, which provided a pleasantly tart, salty contrast to the otherwise rich, creamy shellfish.

Ultimately, a steakhouse must be judged by its beef. Lomonaco has been thoroughly proactive; he sources beef dry-aged 28 days and replaced the grill he inherited from Vongerichten with his own. The meat gets a serious, glorious char, but sometimes there is too much of it and it overwhelms others flavors. During one visit, the crust didn’t meld with the meat in the porterhouse—it cleaved off like a bad toupee. On a different night, the sirloin got it just right—pink inside, tender, moist, thick, juicy. No complaints.

Lomonaco also plays up the restaurant name by offering other meats that mimic the big, bone-in steak cut—you can get a veal, pork, lamb or monkfish porterhouse if you like. Diners aren’t limited to the usual potato, spinach or onion-ring sides, either. There are hash browns infused with thyme and wrapped in a knishlike shell and creamed spinach with nutmeg and bits of bacon.

I wish all the desserts were as interesting. One night, a server steered me to a bunch of plain-Jane options: a crumbly apple betty, a spongy upside-down pineapple cake, a too-sweet devil’s-food cake. On another night, I tried the cheesecake and couldn’t stop eating the raspberry sauce. The wine list had its own ups and down: I loved the 28 options for half bottles, but didn’t see much on the lower end of the price spectrum.

It’s not perfect, but Porter House is far more fun than V ever was—better food in a more attractive environment. And given that you can easily drop $500 for two at Masa or Per Se, it’s a relatively approachable splurge at perhaps half the cost.