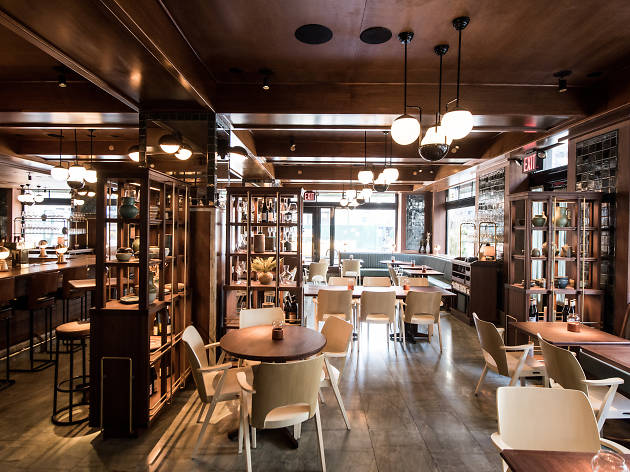 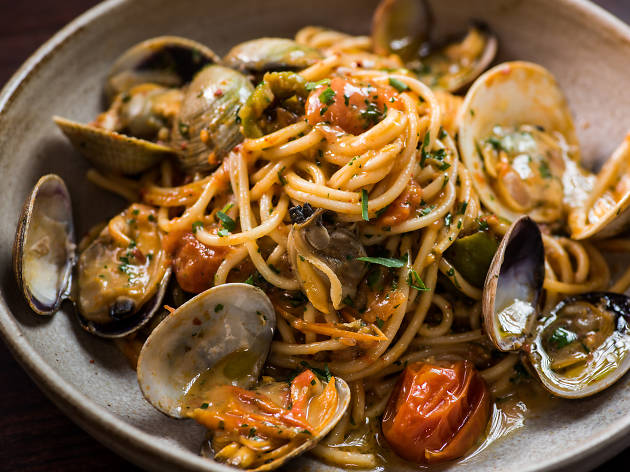 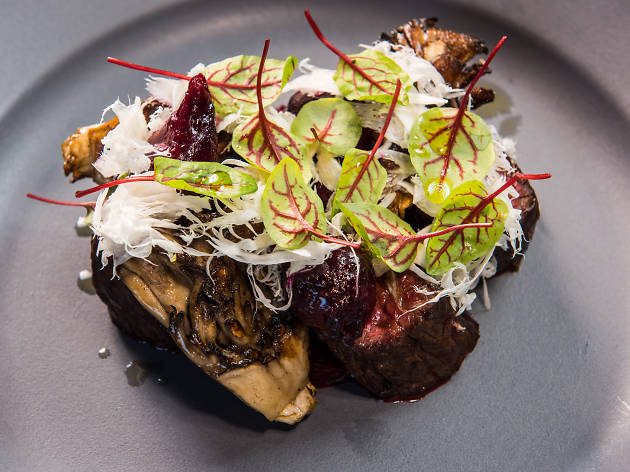 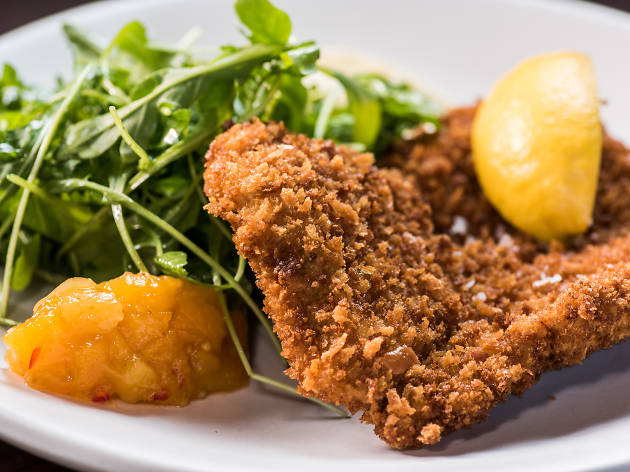 Restaurateur Gabriel Stulman certainly didn’t invent the concept of the neighborhood restaurant, but he’s come pretty damn close to perfecting it. His West Village mainstays (Joseph Leonard, Fedora, Bar Sardine) are the kind of warm, cozy, everybody-knows-your-deal gems that ooze with the comforts of home.

So, what happens when the king of community-centric dining expands his empire to include a hotel’s inescapably transient clientele? At Simon & the Whale (Stulman’s first-floor flagship at the Freehand Hotel), what happens is an impressive reckoning of what a neighborhood restaurant can be when your fellow diners—the tight-sweatered Spaniards haggling for a table, the paleo hipsters fresh off the Acela—aren’t neighbors at all but a revolving door of hotel guests. The ample space (dwarfing his West Village shoeboxes) is segmented enough to still feel intimate, awash in a warm glow of wood, brass and soft light. Glimmering teal tiles and faded-green banquettes set a suitably oceanic scene for slurping vibrant, Thai-style crudo in a place named after Stulman’s son, Simon (now 5), and the glut of whale-themed gifts he scored as a baby.

Despite the bustling environment, Stulman has created a space that still feels anchored. This has a lot to do with chef Matt Griffin (Fedora, Bar Sardine) and his eclectic American menu of unwaveringly tasty dishes that feel more timeless than “on trend.” The corkscrews of silky squid and black-barley risotto sing “Kumbaya” next to the campfire-kissed smoked mussels, and slices of Wagyu flap steak sport an old-school flurry of freshly grated horseradish.

There’s something refreshingly unfetishized about Griffin’s stunning plates, as if they could give zero fucks whether you Instagram them. Take, for example, his straight-up fish sandwich: blackened pollock on feathery poppy-seed challah, served with creamy root-vegetable slaw and (let’s not overthink it) crispy fries. A toothsome dried-spaghetti–and-clams dish (a riff on Griffin’s childhood favorite) is luscious yet light with parsley butter, burst cherry tomatoes and a briny olive-caper punch. A crunchy, buttermilk-bathed pork-collar Milanese is balanced with sharp poached apricot mostarda, lemony arugula and aioli. (It’s a giant fried pork cutlet, people. Get it!)

And let’s not sleep on the weirdest and most unexpectedly delicious dessert I’ve had in a minute: pastry chef Charmaine McFarlane’s charming alchemy of spiced-bread custard and pine-flavored granita that tastes like you’re eating pumpkin pie off a goddamn Christmas tree.

It’s not quite what you’re used to, but it sure as hell feels like home.