The Mark Restaurant by Jean-Georges 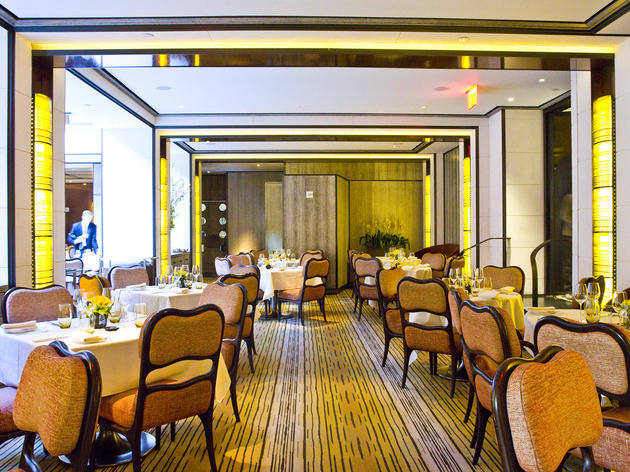 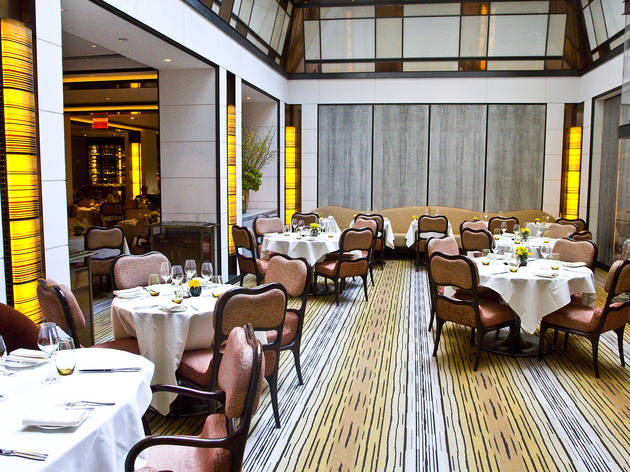 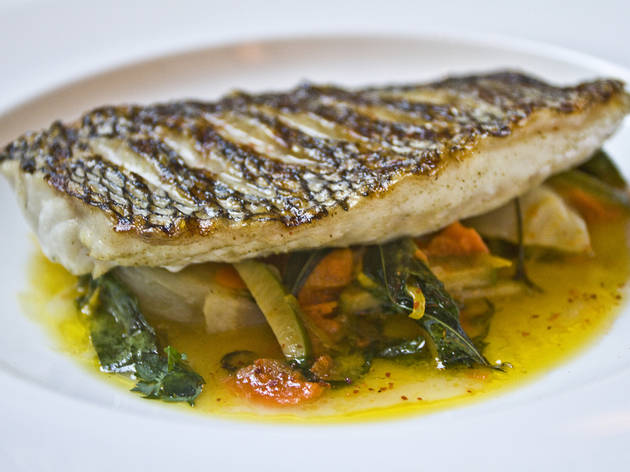 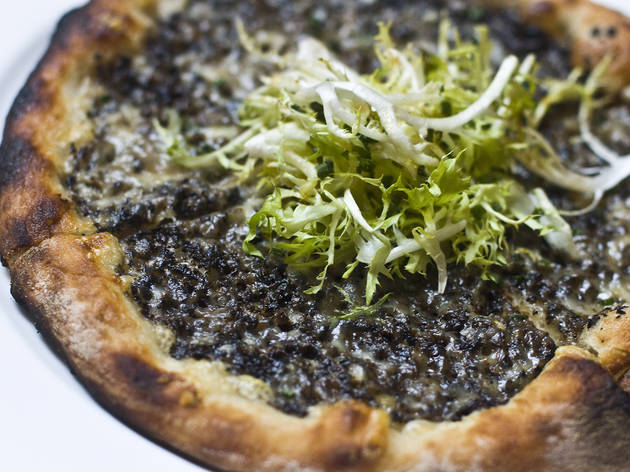 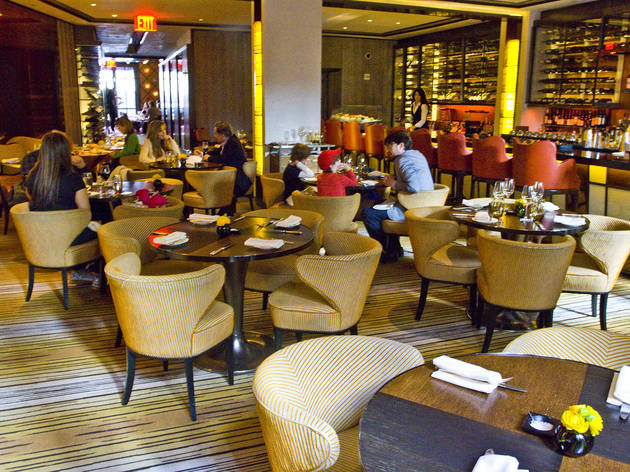 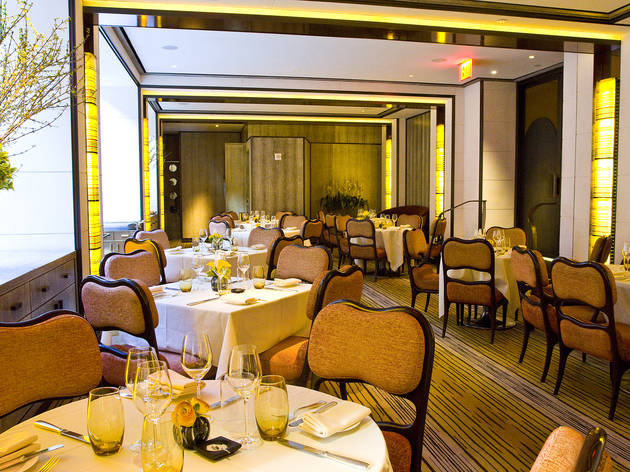 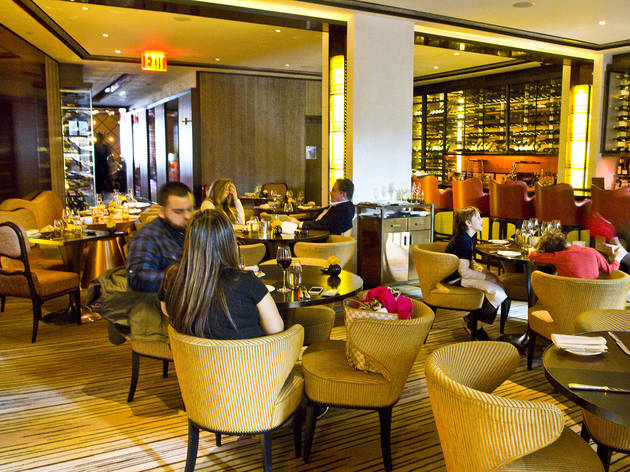 In New York, Jean-Georges Vongerichten is known for bringing a spare Asian aesthetic to haute French cuisine, for maintaining a flagship at the top of its game while juggling more modest projects all over the city, and for somehow managing to be all places at once. In addition to being one of the city’s most celebrated chefs, he is also one of its savviest businessmen, making a killing spinning off restaurant franchises around the world. Basically, he’s created various templates—J&G Steakhouse is one, Spice Market is another—which he offers to hotel clients worldwide. It’s like choosing a restaurant concept from a catalog. His latest, in the beautifully rebranded Mark Hotel on Madison Avenue, doesn’t look—or taste—like it’s the eighth or ninth branch of a chain, but that is, in fact, pretty much what it is.

The Mark is based on a concept called Market—with outlets in Atlanta, Boston, Vancouver, Paris, Istanbul and Doha, Qatar—that’s an upscale hybrid of a bistro and a diner, featuring a high-low mishmash of the sort of food Vongerichten’s been serving for years at Mercer Kitchen, Perry Street, JoJo and Vong. Though the New York branch masquerades as a stand-alone project—it’s officially the Mark by Jean Georges—it shares its DNA and a good deal of its menu with its far-flung predecessors. Still, it’s been customized for its particular locale, expertly tweaked to fit seamlessly into the Upper East Side with plush tweedy chairs, pin-striped carpeting and lighting that flatters even the most frequently Botoxed.

Vongerichten has done a fine job wooing the natives—the restaurant was mobbed with tablehopping power players on the first night I dined there. It’s the perfect addition to New York’s most stagnant restaurant neighborhood, as inviting at night, when the room is dark and sultry, as it is when the sun still streams through the glass atrium ceiling. And the simple, accessible food is exciting without being too challenging, flawlessly executed and lighter than most comparable fare.

Though the menu breaks little new ground, it certainly shows off the chef’s impeccable standards—with top-notch ingredients and cooking that’s consistently polished. A miniature pizza topped with black-truffle paste and melted fontina is an indulgent treat that shamelessly flouts the new Neapolitan dogma among New York pizzaiolos. Like the restaurant’s fine burger—topped with more truffle and a mild slice of Brie—it’s an opulent throwback to the days when top chefs making burgers and pizzas was still pretty novel. Many other dishes seem as self-consciously calculated to inspire premillennial nostalgia—but are smartly reconceived so they’ll pass muster today. Tuna tartare is not a late-’90s soy-and-sesame-slicked snooze but a vibrant, lemony hybrid of tartare and nioise salad, with capers, black olives and haricots verts. Fried calamari moves beyond generic bar food with a delicate, greaseless fritto misto batter, a sprinkling of pulverized basil and a side of silken lemon aioli. Even a classic veal milanese—pounded here as thin as a wafer—is lightened and brightened, with Japanese panko swapped in for more traditional seasoned bread crumbs.

Early in his career, Vongerichten began replacing old-fashioned buttery sauces with warm vinaigrettes—adding an umami grace note to meat and seafood, and a much lighter finish. At the Mark he serves a gorgeous roasted lobster, split down the middle and showered in warm mushroom dressing, and an extra-supple grilled hunk of tenderloin, anointed with tart brown-butter vinaigrette (the steak also comes with a beautiful bouquet of favas, spring garlic, carrots and dill).

Although Vongerichten unleashed two restaurants on New York within weeks of each other (the second is ABC Kitchen), he was on hand at the Mark the first time I visited. I don’t expect he’ll be lingering long. Through the expansion arm of his business—a well-oiled machine called Culinary Concepts—the chef has been averaging a new project a month. He’s gotten the fine art of opening restaurants down to a science, putting high-end chains in an impressive new light.

Drink this: The Mark’s large selection of wines by the glass hits every price point, from a bargain green-apple Alsace pinot blanc ($11) to a rich, buttery (and somewhat more pricey) sancerre ($16). There are also deals to be found among the half bottles, like a delicious, bright albario from Lagar de Cervera ($24).

Sit here: The most relaxed—and sceney—tables are up near the bar, while the prime power seats (judging from Mayor Bloomberg’s placement) are front and center by the host stand. At lunch, request a table under the atrium skylight.

Conversation piece: The Mark, like all restaurants from Culinary Concepts, was opened by a crack team of professionals, chefs and front-of-house managers who parachute in for six weeks (training staff, tweaking lights, fiddling with menus) before moving on to the next restaurant project.

Near The Mark Restaurant by Jean-Georges