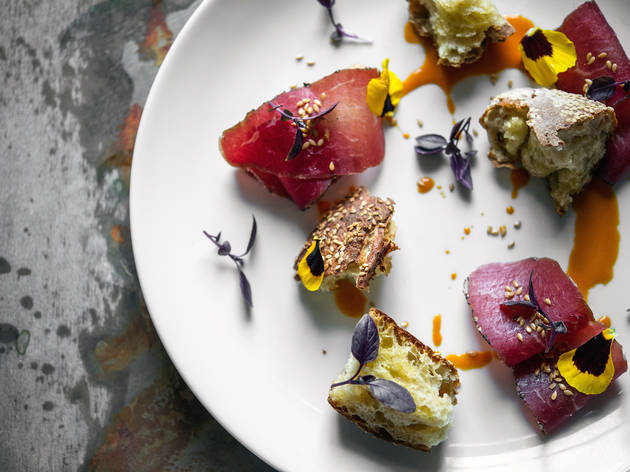 1/7
Photograph: Daniel KriegerBresaola at the Pines 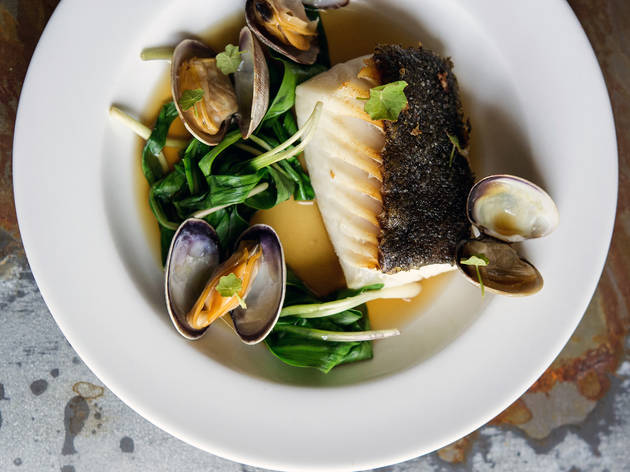 2/7
Photograph: Daniel KriegerSablefish at the Pines 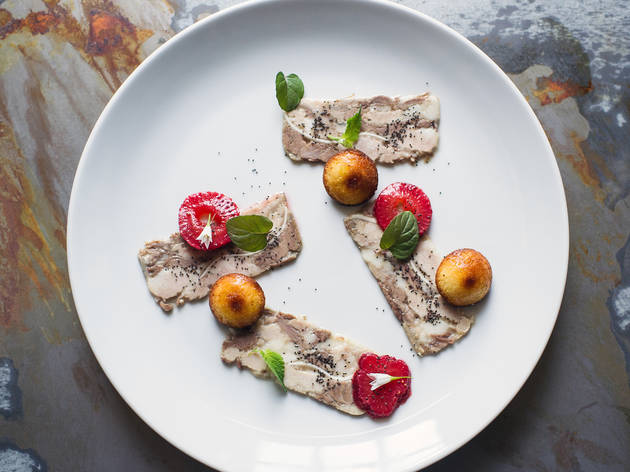 3/7
Photograph: Daniel KriegerTesta at the Pines 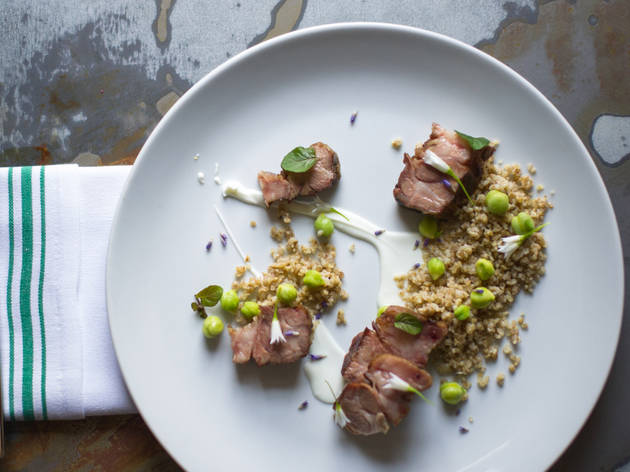 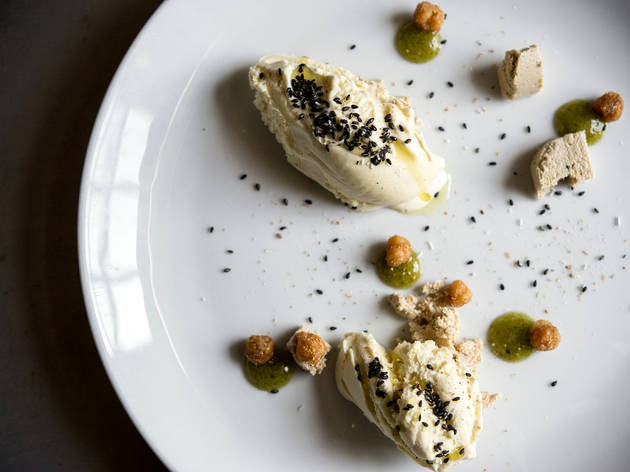 5/7
Tahini ice cream at the Pines 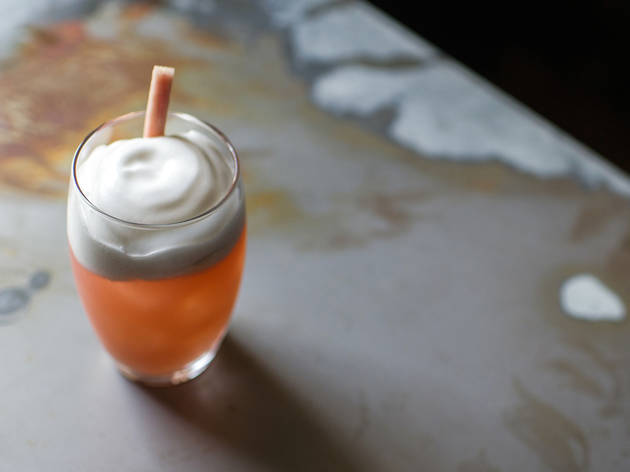 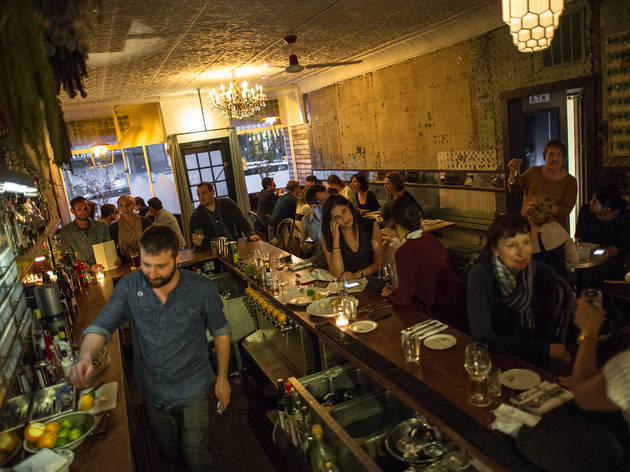 When an ambitious restaurant opens on fringe territory in New York, critics and buzz prospectors have a collective conniption. We trip over ourselves to declare a neighborhood an up-and-comer—Bed-Stuy, Harlem, Long Island City—fanning down our excitement like a pack of overheated Scarlett O’Haras. That’s the tragic thing about a great chef planting a flag on virgin turf: The neighborhood story tends to overshadow the culinary one.

But we’re not going to do that today. Because while the Pines may indeed be remote—a few treacherous sniffs away from the Gowanus Canal—the real news is that it’s simply an excellent restaurant.

The chef is Angelo Romano, a Roberta’s vet who went on to cook serious food at the short-lived Masten Lake in Williamsburg. He’s the woolly linebacker overseeing the open kitchen in back of the Pines—a gob-smacking, aggressive-growth kind of talent and one of New York City’s more interesting iconoclasts right now. With his evocations of huckleberry and hyssop, knotweed and kumquat, Romano’s menu makes a powerful point up front: ain’t gonna be no hamburgers here.

Instead, you might start with torn hunks of craggy semolina bread, plated among rosettes of locally cured beef bresaola and a puree of fermented tangerine. There are wispy slices of compressed testa—like an offal lover’s birthday cake—with crumbles of lemony pastry and strawberries scattered over the patchwork of sticky, lush headcheese. An uni starter is a bicoastal duet, with the crunch of puffed amaranth, tendrils of leafy cress and the tart juice of sea buckthorn berries deadlocking rich lobes of Maine and Santa Barbara urchin. Asparagus gets a similar diptych treatment: green stalks heaped with caviar, white ones bathed in tangy goat’s-milk custard and poppy seeds.

Romano keeps this vanguard beat thumping through the rest of the menu. An entrée of lamb neck, cooked sous vide until its cartilaginous bits wave the white flag, is served in austere slices held together with transglutaminase (street name: meat glue). Gamey and rich, the meat is paired with butter-drenched kasha, fava beans and a sauce made with mentholy hyssop—a crafty surrogate for traditional mint jelly. If this dish is a testimony to Romano’s chefly intellect, his sablefish is an affirmation of solid technique: Crispy skin and flaky flesh converge in a dashi broth floating ramps and plump Manila clams. For dessert there are quenelles of kinky ice creams—nutty tahini scoops garnished with halvah and fried, sugar-dusted chickpeas; an ants-on-a-log revision with raisin gelato, celery granita and peanut butter shortbread.

Sure, you’ll eat all of this hunched on folding chairs, amid peeling tin walls lit by a spidery chandelier. Outside, the glow of a Super 8 motel sign greets you as you tumble back onto Third Avenue, drunk and full.

Poetic exits are hard to come by in Gowanus. Poetic meals are now easier to find.

Drink this: Cocktails are as thoughtful as everything else. There are seasonal drinks, like the ethereal Fizzy Lifter, with rhubarb and Ransom Old Tom Gin. The stirred Nochera—with Campari, Averna, mescal, and a new-world whiskey blend of Scotch, bourbon and rye called High West Campfire—is a beautifully bitter smoke bomb.

Conversation piece: The trellised backyard, opening for the season on Sat 18, will feature its own dedicated menu of fire-licked dishes—octopus with ramps, Basque sausage with celery mostarda—prepared on an open wood grill.