Meet the Undateables: David and Barrie

Why they’re single
Barrie: He struggles to find anyone he has anything in common with.
David: He's not been putting a lot of attention into dating and hasn’t been on the apps.

Ideal date:
Barrie: Grabbing a coffee and going on a walk
David: A chill dinner where you can talk and get to know one another

First impression
Barrie: "We met just outside the restaurant. I was running a little late because I drove to avoid public transit and the traffic was horrendous. We met outside. I was almost a little intimidated because he came off as way more put together than I am—just how he was dressed and where he is in life and everything."
David: "He was clearly embarrassed because he got into the area on time, but he had a really hard time finding parking and ended up being late. The area’s not very parking friendly. He seemed like somebody who powers through nervousness with humor, but he was a very kind guy. He seemed to be informed about the kinds of things he talked about." 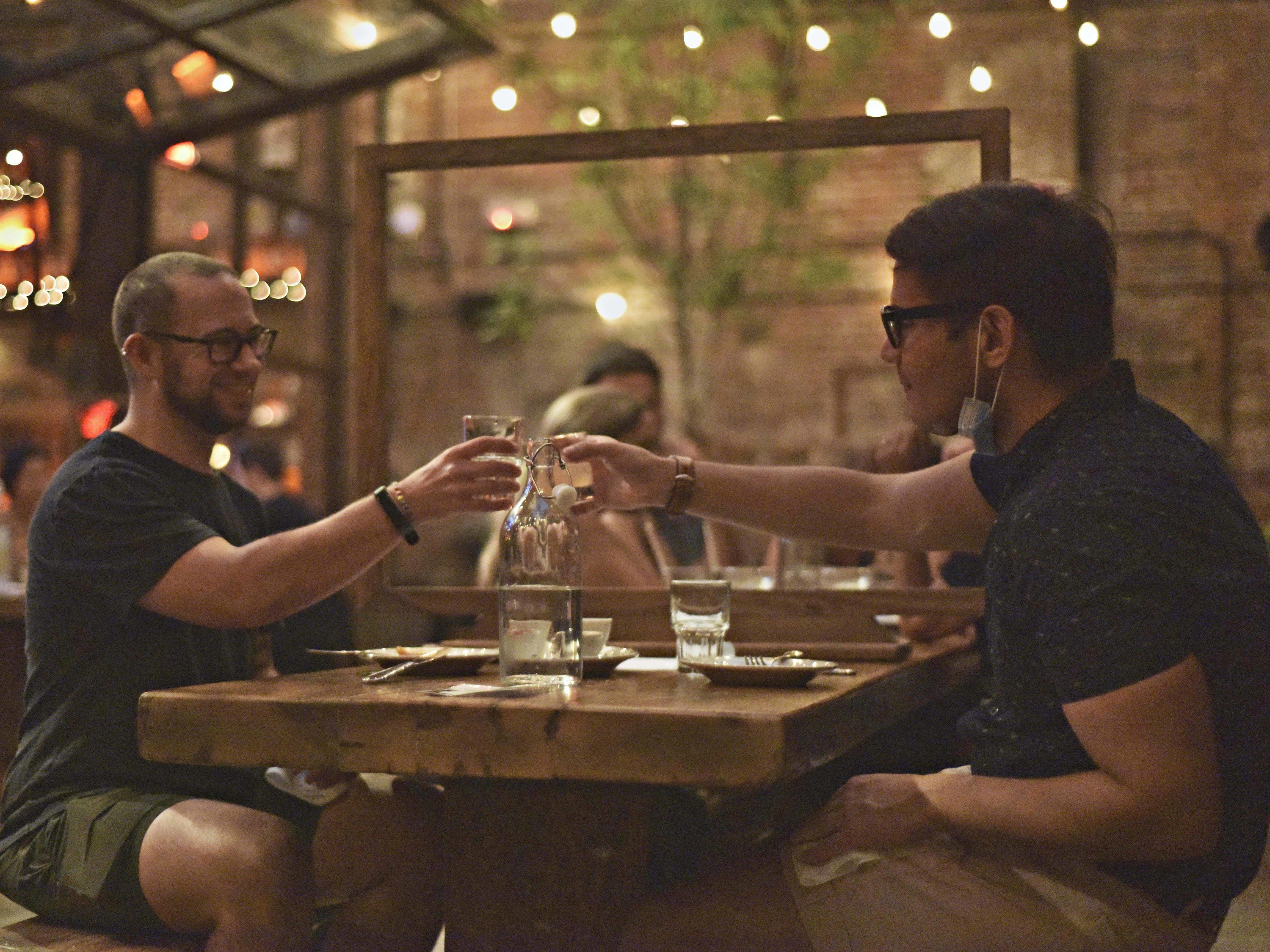 Chemistry
Barrie: "I think we have some similarities which almost made us not a good match. We were too similar in some ways, and too different in other ways, that didn’t complement each other. I think we definitely have similar values, especially politically."
David: "I don’t know if we sparked that way. There’s definitely a lot we don’t have in common. For instance, he’s interested in sports. He’s done martial arts and works in fitness. But we have compatible views on politics, so we talked about police brutality, American fascism, things like that."

Awkward Moment
Barrie: "I felt really bad whenever I mentioned my dietary restrictions. Unfortunately, it always comes off as a judgmental when I bring it up. I’m really only lamenting the fact that I can’t consume something. He was kind of joking about it."
David: "For him, it was the parking thing. It wasn’t a big deal for me, but he seemed so embarrassed by it at first, and he also sent a text about it later. For me, it was no big deal. I was pretty understanding. And he wasn’t even that late." 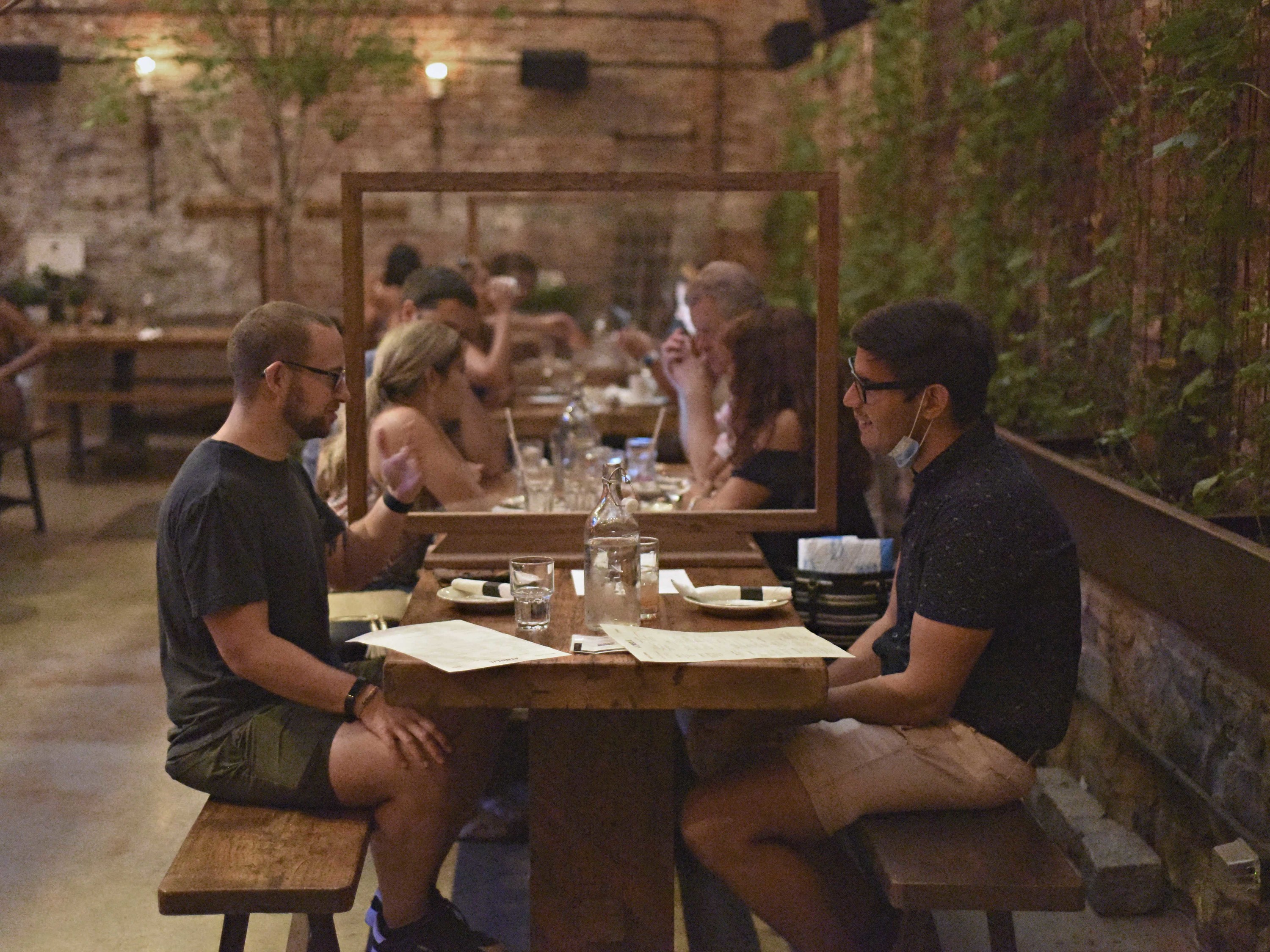 Dystopia Dating Vibes
Barrie: "The masks make everything awkward. It’s uncomfortable meeting someone new and not knowing their comfort level in that situation. You’re very conscious about how other people feel about these things, especially because the mask is protecting that other person. It’s kind of a game, and it doesn’t feel totally normal yet."
David: "It was surreal. I still don’t know how to gauge how people want to be physically greeted—if a handshake is ok or if a hug goodbye is ok. So that adds a layer of awkwardness to it. We shook hands. I asked for permission for that."

Afterward
Barrie: "We were both a little unsure of how to end, but we felt a little bad we were taking up the table for so long. He walked me to the car, and we exchanged numbers. There was a hug, which is a little awkward because, once again, personal space. But he initiated it, so that made me feel better."
David: "We were talking for a long time, probably an hour or so after dinner ended. I walked him to his car, we exchanged numbers and that was about it. There was kind of an air hug." 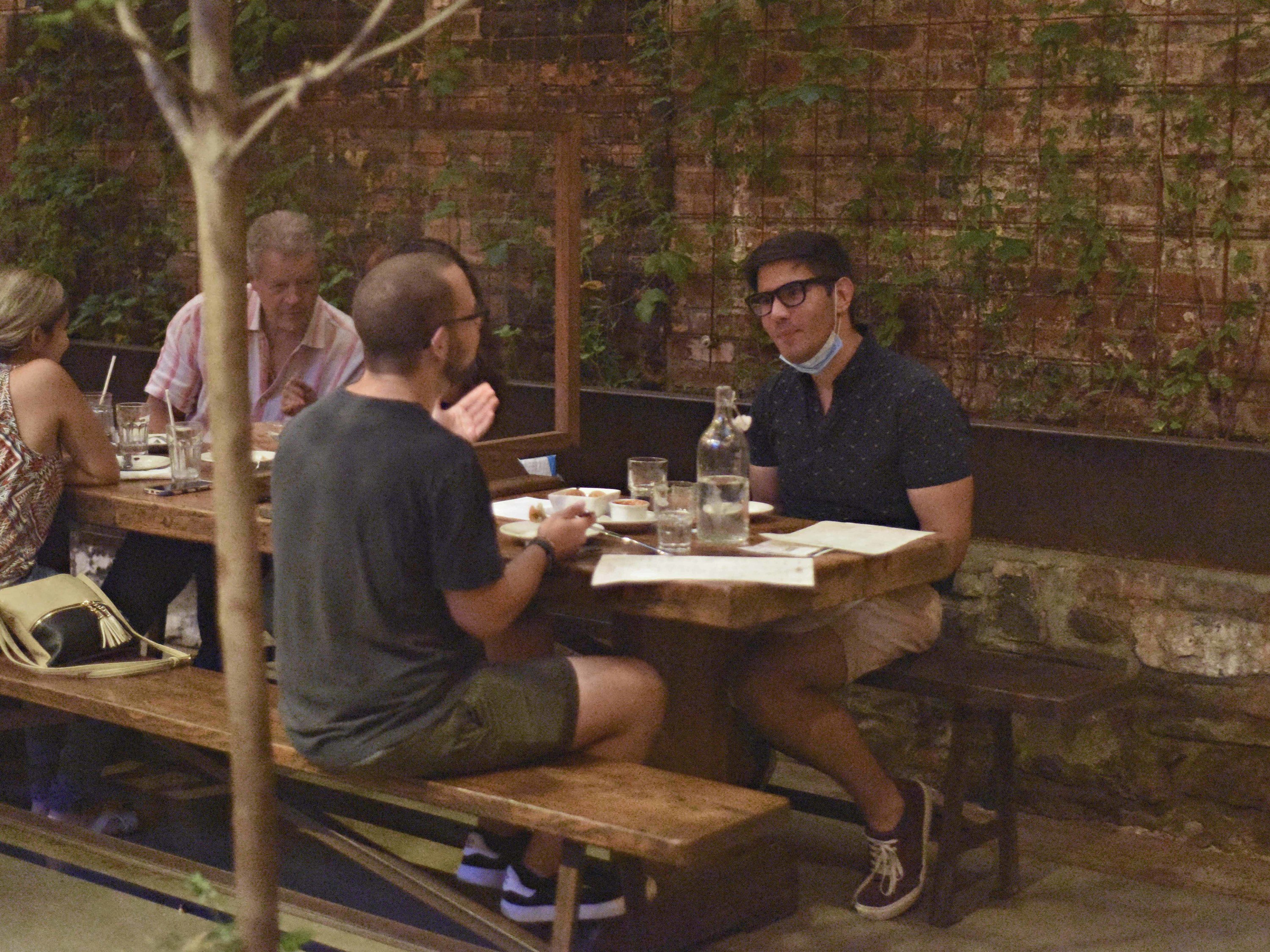 Barrie: ♥♥♥♥ "We got along well enough to have a realy interesting conversation, but I don’t think we have enough in common for it to be more than that. I went into it not taking it seriously, but that changed when I met him, because he deserved more than me being nervous and going for a laugh because it wasn’t that at all."
David: ♥♥♥♥♥ "I’d hang out with him again, but I don’t know if it would be romantic. Even if it doesn’t lead to me having my next boyfriend, it was still a good use of my time. I honestly thought that a blind date would be more awkward, so I was surprised by how smoothly it went. I would say that it succeeded expectations."

Barrie: "It was a great spot. We shared a risotto ball appetizer which was unique and tasty. They were really good. And I had the salmon for dinner which was tasty. The outdoor space they have is great. The space we sat in felt more like a beer garden in the back. They can accommodate a lot of people."
David: "The dishes were great. I had a pesto pasta with sausage. The appetizer was great, too. I had a drink that was made with tequila called a High 8, that was really good. I’d recommend it."