Why they’re single
James: He's struggling with going over that 30 hump and feeling older than he is.
Annabelle: She doesn't try.

Ideal date:
James: Binging episodes of Martin and drinking some Coronas
Annabelle: Something active and hands-on like an arcade

First impression
James: "She came off as nice but seemed a little nervous. It took a while for us to get in a groove. She was reserved, at first, in terms of showing off her personality. She was also clutching her purse for the first 30 minutes which is kind of a sign of being uneasy in general."
Annabelle: "My first impression was, like, Oh, thank goodness he’s cute. We sat down and took off our masks and got to it. He was really jokey. He kept saying things, and I’d believe it. Then he’d be like, 'No, I’m just kidding.'" 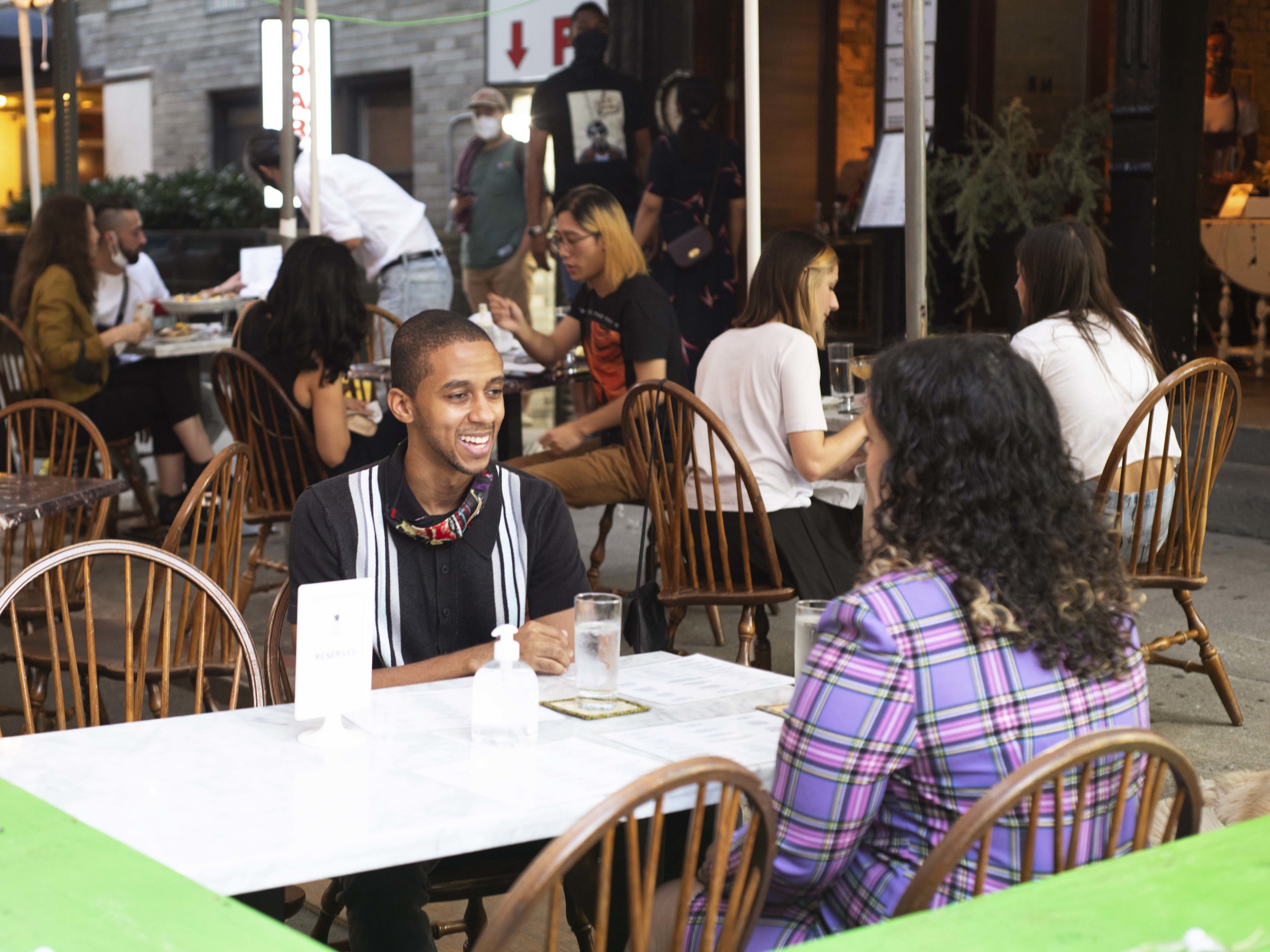 Awkward Moment
James: "We hung out after we left the dinner spot. We walked to the East River, sat down and chilled over there and looked at the sights. She said she’d never taken the air tram to Roosevelt Island, so we did that. On the platform, I got into a little argument with a woman about face masks. So that was awkward."
Annabelle: "At the very beginning of the date, we were ordering cocktails. He was like, 'Oh I go to AA, and I don’t want to drink.' And I was like, 'Ok.' But then he was like, 'No, just kidding.' But he really deadpanned it, so I believed him." 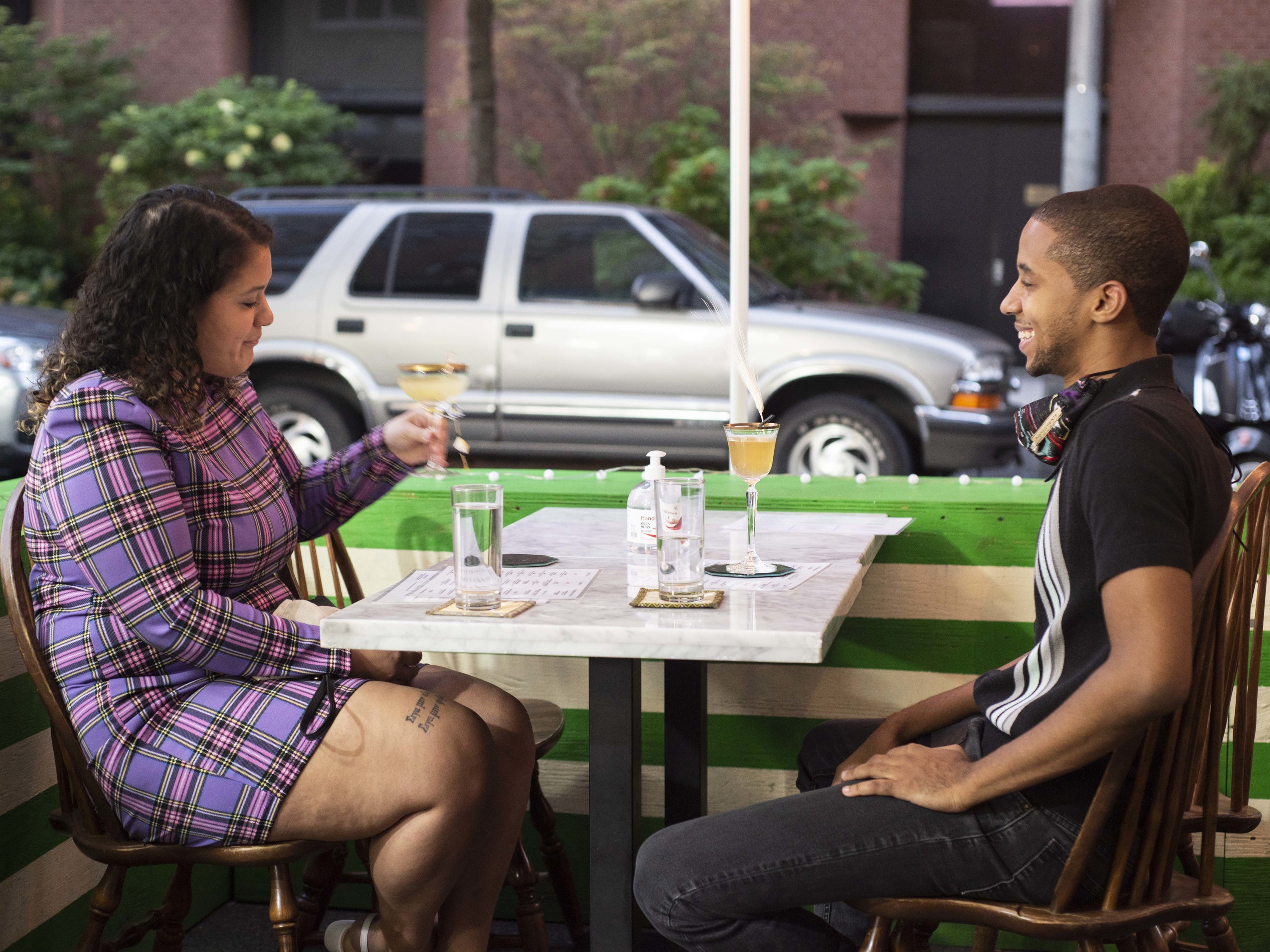 Dystopia Dating Vibes
James: "The masks were a thing, but it felt more normal than other dates I’ve had since this whole COVID thing. She set the standard because she took the mask off when we first sat down. So I saw that and was like, Oh, Ok. I’ll take mine off too. But other than that, there wasn’t anything out of the ordinary. I’ve had more weird, awkward dating experiences lately."
Annabelle: "He’s the first stranger I’ve met in seven months, so I had to turn my social skills back on. I think we’d both been doing outdoor dining, so we were both used to the vibes. I think it became natural and normal pretty early on during the date."

Afterward
James: "After we rode the Airtram, I dropped her off at the subway. I gave her a hug and a kiss on the cheek, and we exchanged numbers. I’d be open to a second date, I just haven’t asked yet."
Annabelle: "It was really pretty out. The moon was coming up, and it was golden. After the tram, he walked me to the subway. He kissed me on the cheek which is what I call the Pandemic Moment. It's a big deal when you make contact these days. But it was sweet and nice. We texted a little bit but haven’t made plans." 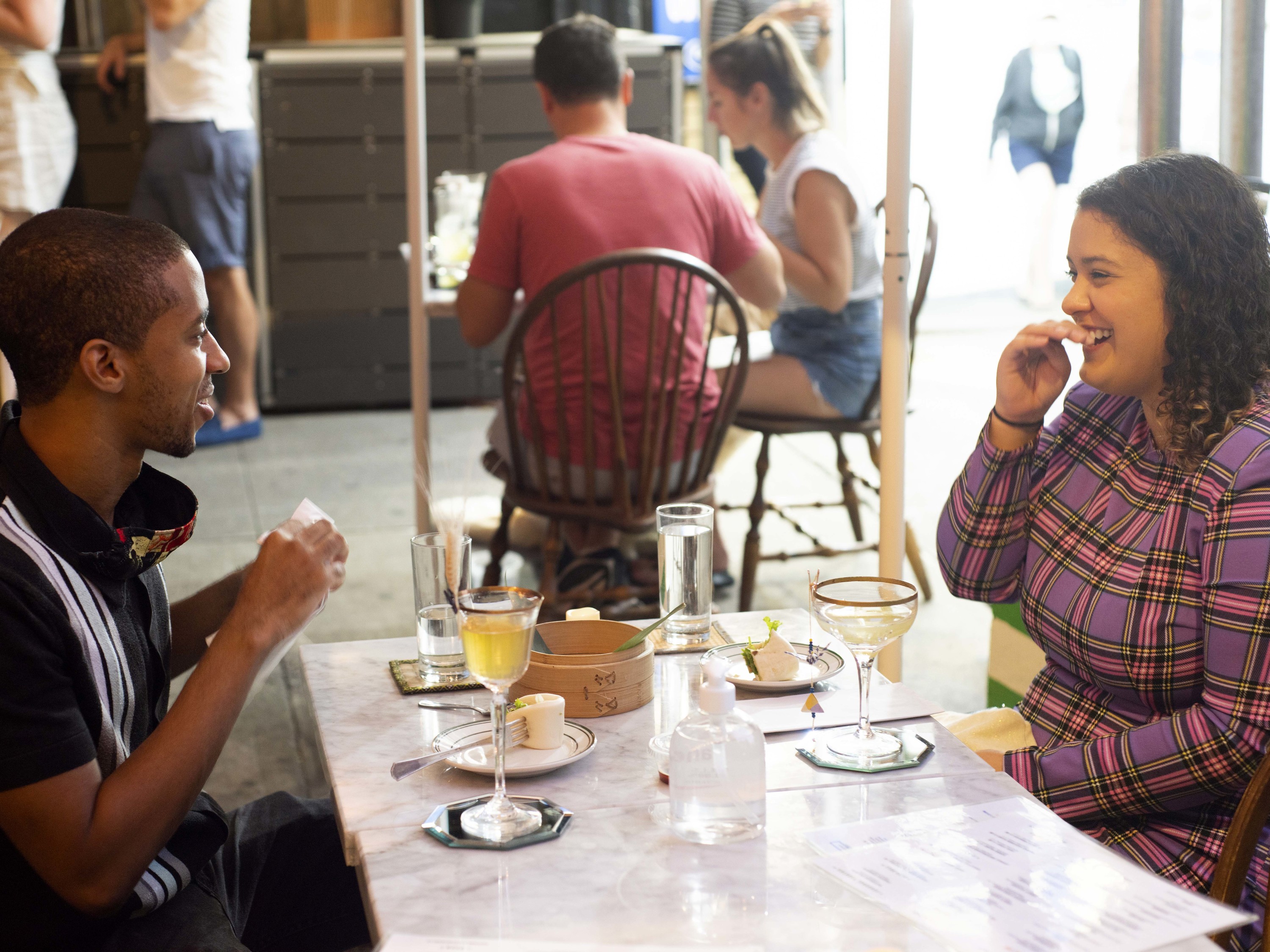 James: ♥♥♥♥ "It went way better than I thought, and I don’t think she’ll have anything bad to say about me. I’ll definitely be open to seeing her again.
Annabelle: ♥♥♥♥ "He was cute, I had a good time. I was nervous going in. I was very shallowly nervous he would be short and ugly, and he wasn’t!"

James: "The food was good! We had the pork buns and a mixed appetizer plate with fried chicken bites, egg salad sandwiches and regular salad. The egg salad sandwiches really stood out. It’s also not on a busy street which is nice. The table we have wasn’t right on the street, and they had little candles on each table. It was a decent outdoor restaurant experience as opposed to being on a busy on a street in midtown."
Annabelle: "It was really great. It’s not something I’d pick on my own, so I’m glad I went. The cocktails were really good. I had a Japanese citrus cocktail. He had a sake-tini. They had a lot of string lights outside and plenty of space, it was a great date spot."