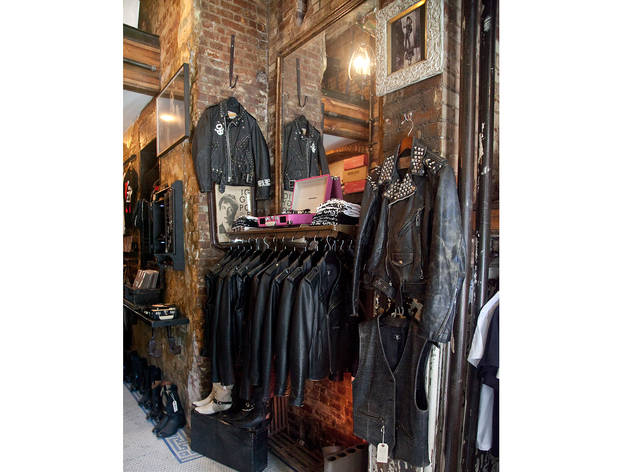 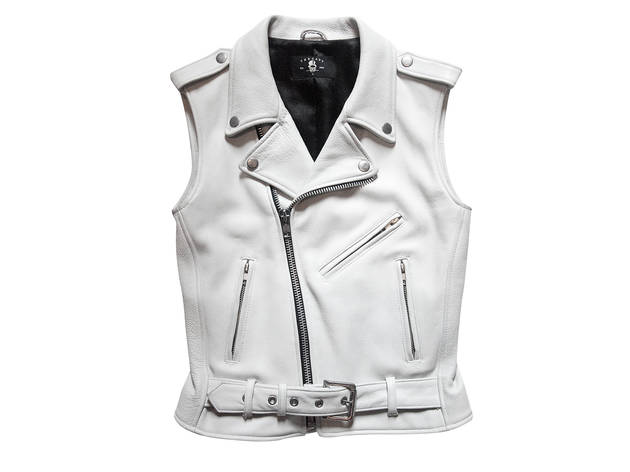 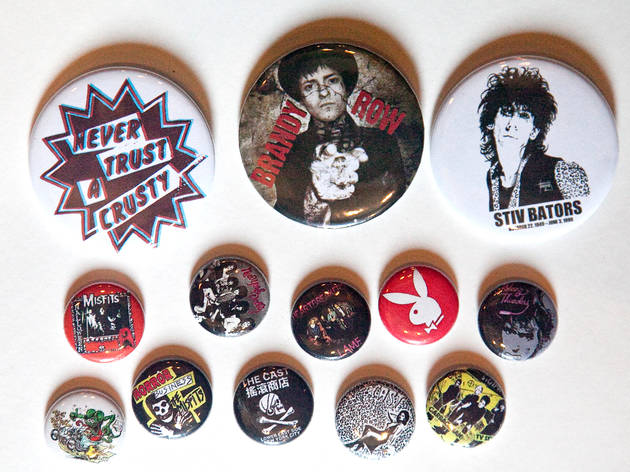 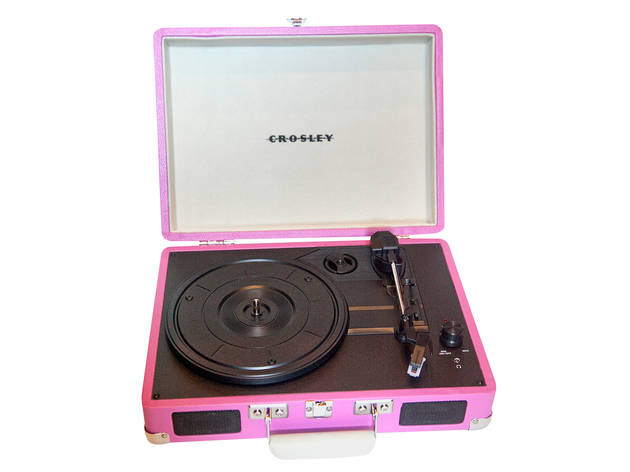 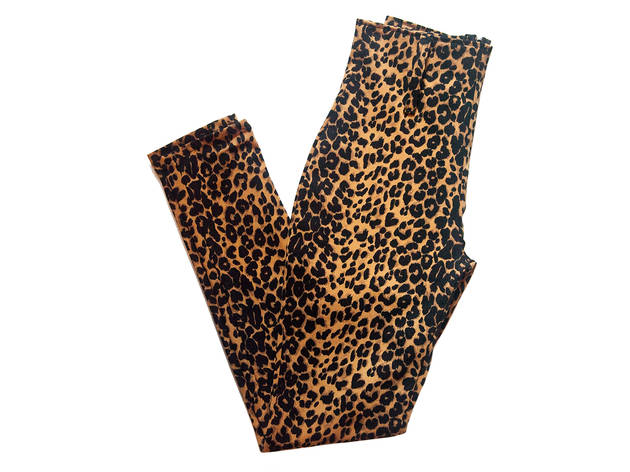 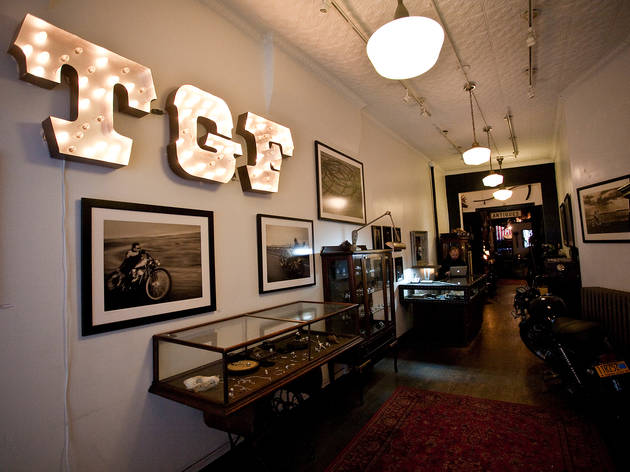 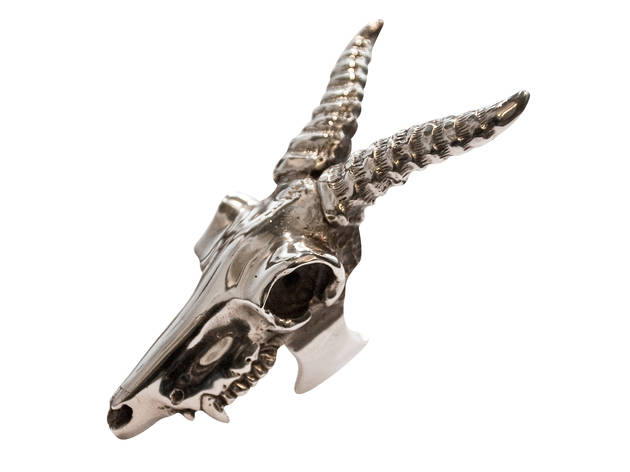 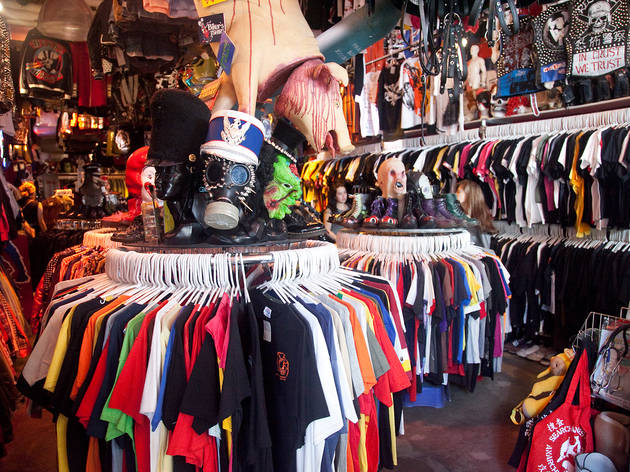 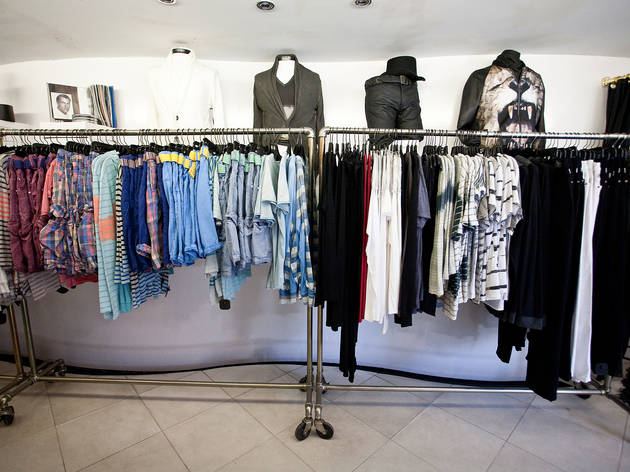 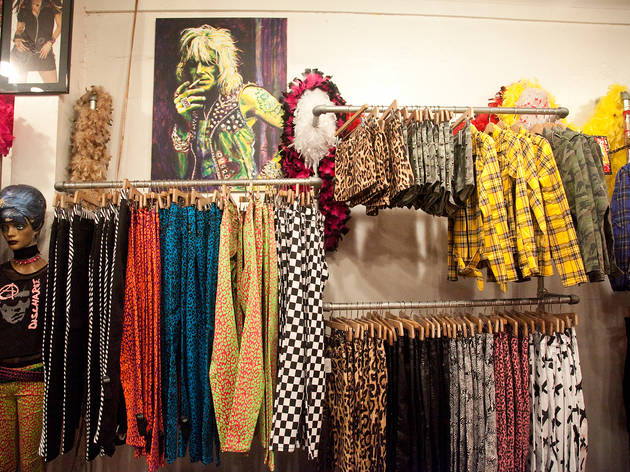 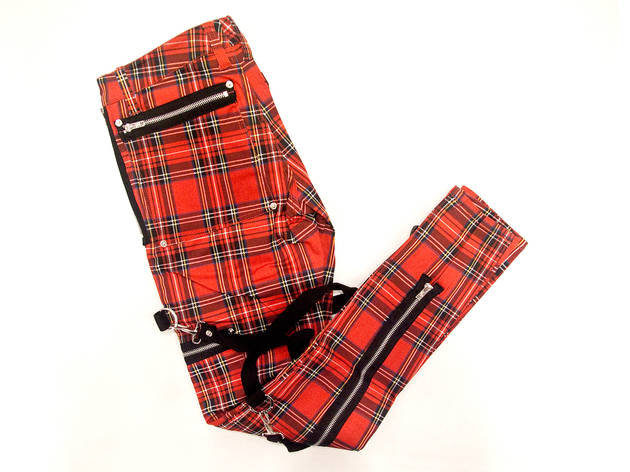 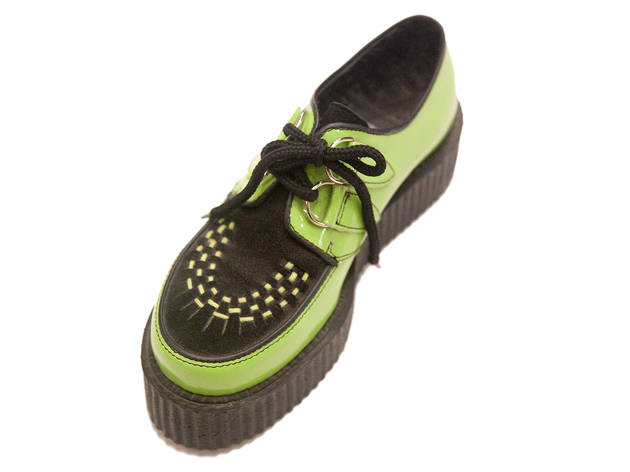 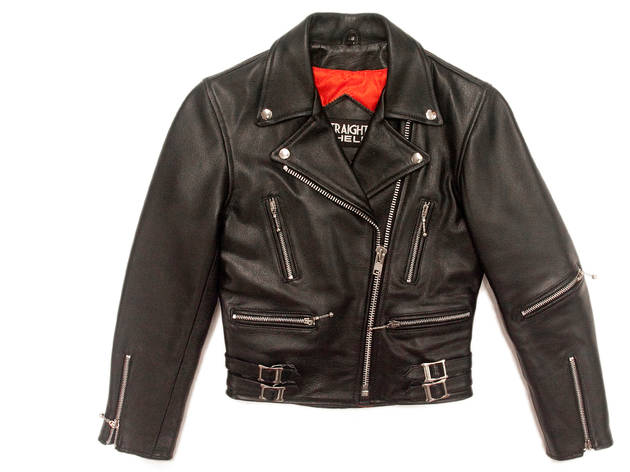 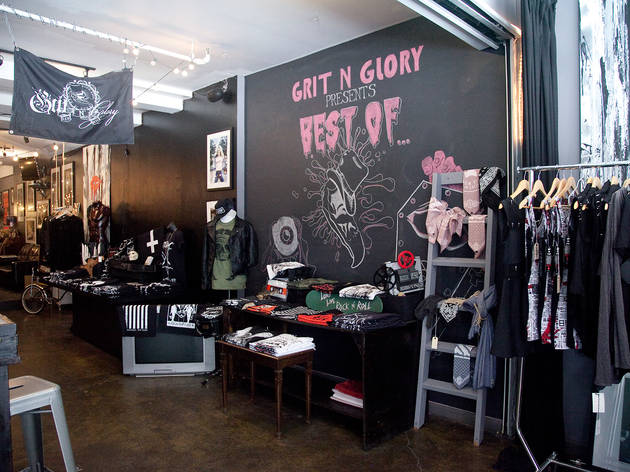 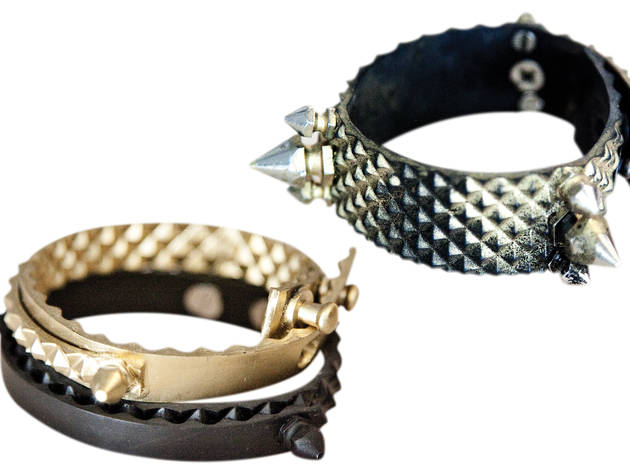 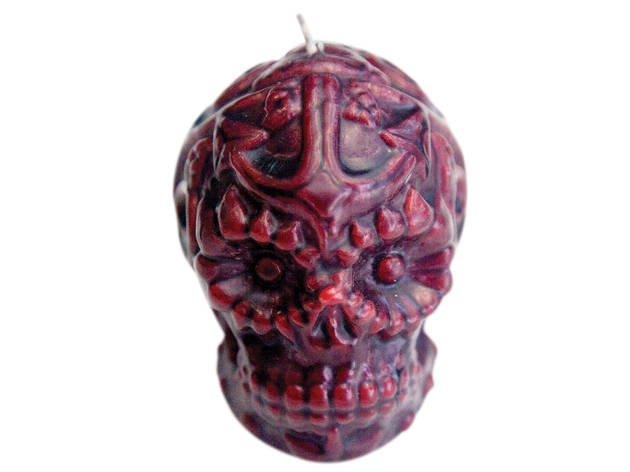 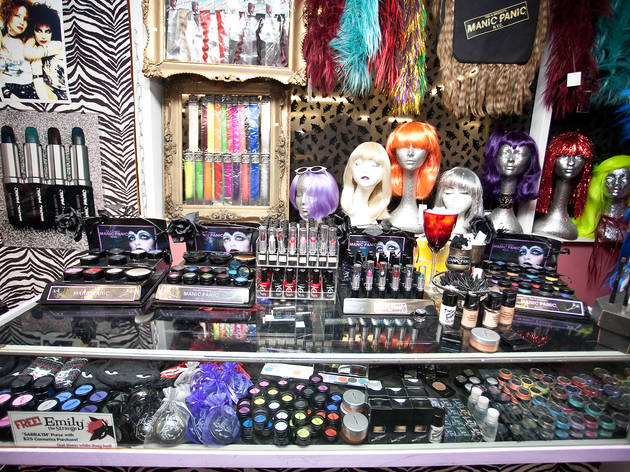 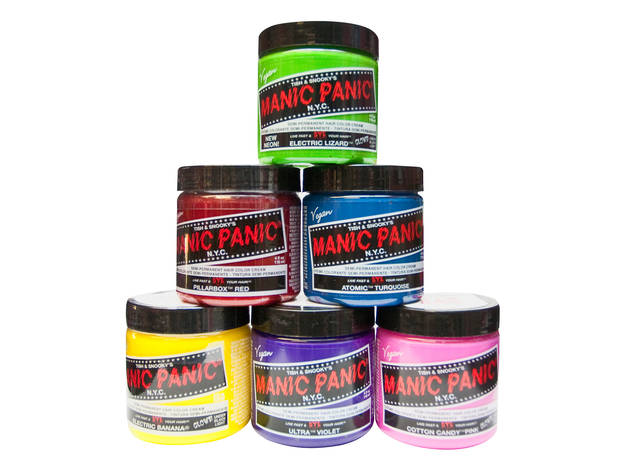 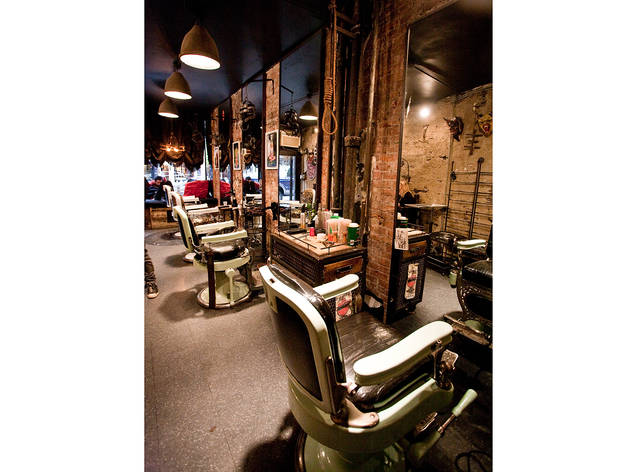 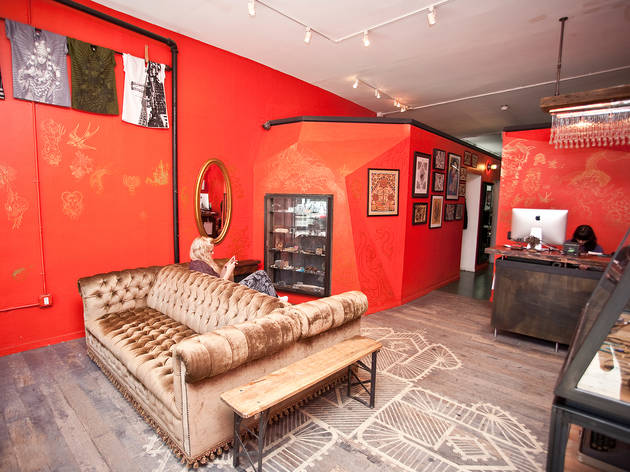 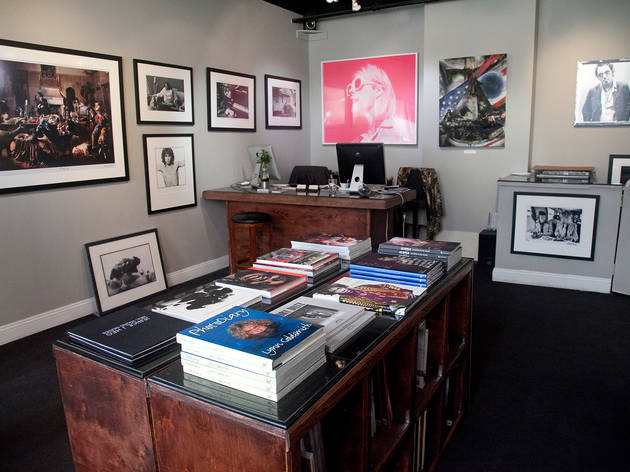 Although the CBGB generation has come and gone, the punk spirit still lives on at these NYC shops and salons. Channel rock icons such as Debbie Harry and the Ramones by shopping for clothing at Trash & Vaudeville, Grit N Glory and the Cast; jewelry at the Great Frog; and hair care at Manic Panic. Finish off your look with a tattoo at New York Adorned and a mohawk from Mudhoney.

RECOMMENDED: Full guide to the best hair salons in NYC 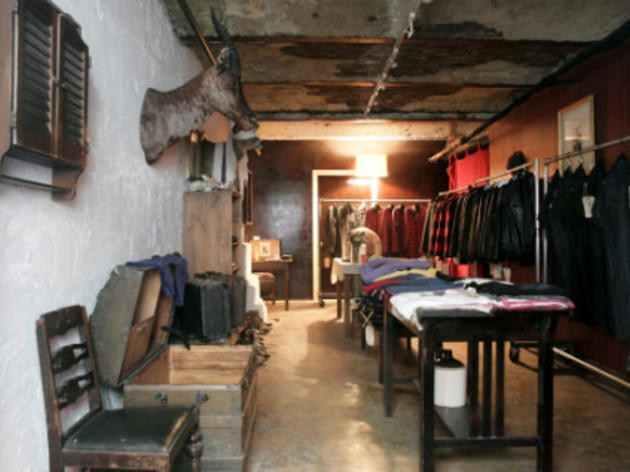 Owned by punk-chic married couple Chuck Guarino and Elisa Maldonado, this neogothic shop specializes in a trifecta of locally made house-label duds for men and women: slim-fit denim ($60–$125), classic leather motorcycle jackets ($400–$750) and hand-screened graphic tees ($22–$30) made in their studio down the block. If you’ve got the patience, you can also create made-to-measure jackets ($1,300–$1,500), vests ($500–$1,100) and pants ($400–$850) customized with your choice of leather, lining, hardware and embellishments (ready to wear in three to four weeks). For instant gratification, check out spotted-leather cowboy bootstraps ($20), record players ($135) and a well-curated selection of old-school punk vinyl ($15–$30) from bands such as the Clash and the Sex Pistols. (212-228-2020, thecast.com) 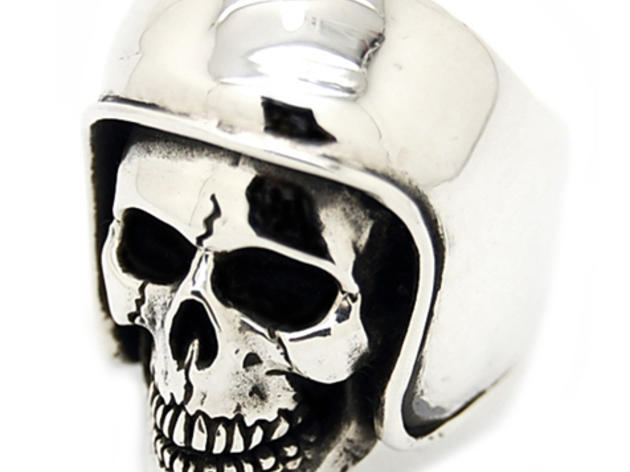 Known for creating the original skull ring, husband and wife Paterson Riley and Carol Lehtonen-Riley started their jewelry business out of a basement in London’s Carnaby neighborhood, where they eventually opened their first store in 1972. The couple’s son, Reino, now oversees the line, ensuring the hand-carved silver baubles ($35–$1,100) maintain an authentic edge. At the Great Frog’s sole NYC location, you’ll find the full collection, including the signature skull rings ($135–$360), silver eye styles ($305) topped with medical-grade hand-painted prosthetic resin peepers, kudu antelope rings ($220–$630) and wolf-shaped pendants ($200). As an ode to the company’s rock heritage—the gritty adornments have been spotted on music legends such as Iggy Pop, Metallica and the Rolling Stones—the shop features a rotating punk-culture photo exhibit. Currently on view: Brooklyn shutterbug Bryan Helm’s (bryanhelm.com) biker photos ($150–$1,500), which are being showcased through June 1. (646-370-5727, thegreatfrog.com)

Since 1984, this rock & roll mainstay has carried the latest punk-inspired apparel ($100–$5,000) and avant-garde accessories ($100–$700) for men and women. Although the shop was once known for stocking nearly the entire Vivienne Westwood collection each season, nowadays the boutique carries both established brands (Isabel Benanato) and lesser-known labels (Demobaza) with a similar gritty edge. Owner Kevin Kelly has dressed several performers en route to CBGB, including Debbie Harry and Lou Reed, in duds handpicked from his boutique. You’ll be stage-ready in Chromat boned corset tops ($188), Skin-graft leather bondage-strap tanks ($144) and men’s Mackage leather shorts ($355). (212-228-5166, facebook.com/shopuntitlednyc) 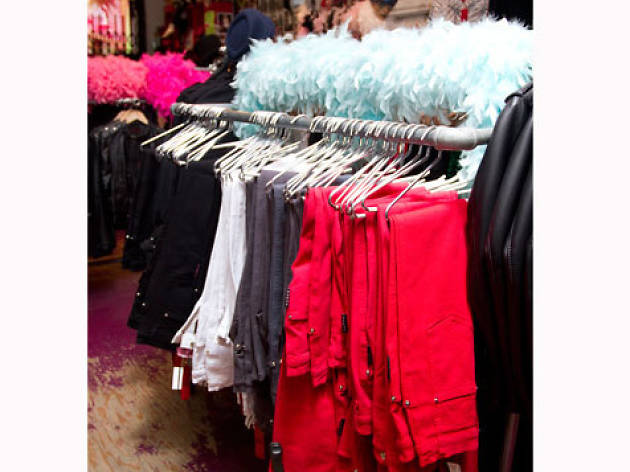 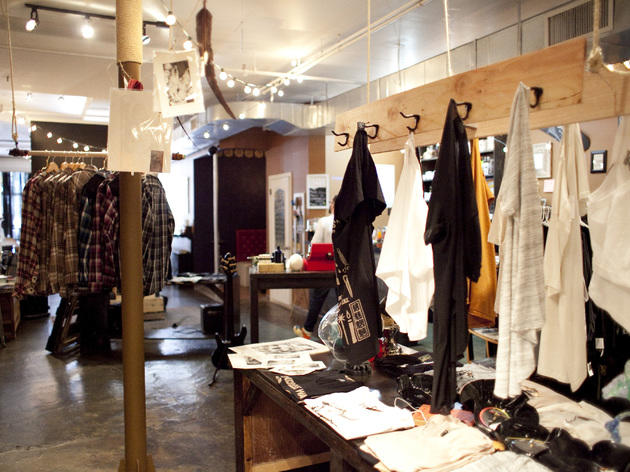 Music fans and friends Emily Conley and Veronica Cano opened this clothing store for both sexes in November 2011 to combine the two things they love most: punk and metal. Grab a cup of Stumptown coffee ($3–$5) from the in-store café and take a seat in the front lounge, where you’ll find Wi-Fi, board games and a constant stream of cult alternative movies, including The Craft and Almost Famous. The shop showcases current rock-inspired designers, including Lip Service and Kill Star, with enough skull-emblazoned duds to dress a bus full of Metallica groupies. Nab Ssik molded-plastic stud bracelets ($20), T-Squad men’s graphic tees ($42) and Little Dead Things skull candles ($18). (212-253-2775, gritnglory.com)

In 1977, sisters Tish and Snooky Bellomo—who served as band mates in the original Blondie lineup before starting their own band, the Sic Fucks—opened a funky boutique for their unique cut-up and embellished knits, wacky accessories and hair products on St. Marks Place. The shop quickly became iconic in both the punk and fashion worlds, and their collection of brightly colored hair goods ($10–$17) and cosmetics ($8–$18) grew beyond the confines of the East Village. More than 30 years later, the duo is keeping the heritage alive at a store inside their Long Island City headquarters, where they hawk the same wild tubs of semipermanent hair dye ($14), vibrant hair extensions ($5–$14), handmade synthetic-hair–trimmed knit sweaters ($75–$150) and vintage accessories ($5­–$40) from their own closets. Although you can find Manic Panic’s hair-care products at chains such as Ricky’s NYC, there’s something special about going straight to the source, meant to resemble the original spot with bubble-gum-pink walls, leopard-print couches and black-and-white photos of the girls in their old shop and on the stage. (718-937-6055, manicpanic.biz)

Lifelong punk fan Michael Matula’s grungy salon has been taming manes and building mohawks for the past 26 years. While the Nolita branch’s decor is tame in comparison, the original Soho spot is an ode to hardcore rock, featuring four faux-leopard-print styling stations; walls ornamented with goat heads, medieval torture masks and Michael Fox’s trannie pinup photography; and two custom-made wood electric chairs topped with heat lamps for setting color treatments ($100–$180). A team of five skilled stylists execute cuts ($100) and blowouts ($50), and can create anything from an Anna Wintour bob to a bleached-and-glued ’do using the best products for punk styling: Prejume Japanese wax ($22), Schwarzkopf Dust It hair powder ($22) and Star Wax clay ($20). Make sure to stop by the ATM beforehand, as the salon is cash only. (212-533-1160, mudhoneyhairsalon.com)

This punk-approved tattoo and piercing parlor has been adding color to the Lower East Side since 1996, a year before the citywide tattoo ban was lifted. New Jersey transplant Lori Leven once hid the inking behind a garage-door wall inside a jewelry shop, but the five stations are now proudly on view, surrounded by orange walls emblazoned with gold tattoo images and metallic couches to match. The staff of six full-time artists each specialize in different styles, ranging from pinups and portraits to tribal Japanese Tebori ($100–$300). In a glass case up front, you’ll still find hand-cut and polished trinkets ($20–$500) to pair with your piercings ($20–$50, plus jewelry), including antique Indian nose pins ($100), resident piercer J. Colby Smith’s gold septum chains ($60–$120) and Evan McKnight beaded cartilage rings ($145). (212-473-0007, nyadorned.com)

Recording-industry vets Peter Blachley, Rich Horowitz and photographer Henry Diltz tested three temporary storefronts and a four-year stay in the former CBGB Gallery before settling on this Soho location for the Morrison Hotel Gallery, specializing in music photography ($600–$30,000) from rock & roll shutterbugs. The current spot reminded the trio of the seedy hotel in downtown L.A. where Diltz shot the fifth Doors album cover. Expect a vast archive of rare and iconic images—the Jam’s Paul Weller and the Who’s Pete Townshend outside London’s famous Marquee club ($600–$3,000), and the backstage scene at the last CBGB performance ($650–$3,500)—that will take you back in time. Flip through the books full of rare historical music photos, which can be ordered and printed by the photographers themselves as a signed limited-edition artist print ($450–$6,000, plus framing $200–$800) in four to six weeks. The surrounding walls are covered floor to ceiling in the monthly exhibiting artist’s photos: Starting May 17, shutterbug and filmmaker Norman Seeff (normanseeff.com) exhibits his black-and-white film prints ($3,000–$10,000) featuring legends such as the Rolling Stones, the Band, Patti Smith, Miles Davis and Andy Warhol (through June 25). (212-941-8770, morrisonhotelgallery.com)