Behind the scenes of Cirque du Soleil's first Broadway show

Go behind the scenes of Paramour, the Cirque du Soleil extravaganza that’s about to land on the Great White Way

It’s a Thursday morning at Broadway’s Lyric Theatre, a month before the first preview of Cirque du Soleil’s upcoming Broadway production, Paramour, and the stage is full of people doing casually miraculous things. To one side, a guy in jeans scampers gracefully up a vertical pole. Men and women are tossed around like footballs. In the middle of the stage, shirtless men in athletic shorts jump up and down on a teeterboard, the circus version of a playground seesaw, that’s launching each of them into the air in turn, high enough to perform elaborate flips and twists. When they land, their weight smacks the teeterboard down against the ground, in a slow and regular rhythm: ka-thump, ka-thump, like a heartbeat.

These performers may be the core of Paramour, but they are also part of a much larger jigsaw puzzle that is carefully being assembled. For unlike the spectacles that Cirque du Soleil offers in its trademark yellow-and-blue tents, which are collections of specialty acts loosely united by fantastical costumes and themes, Paramour weaves its circus elements into a straight-up Broadway musical with an original score and a plot about a love triangle in golden-age Hollywood. “There are teeterboard and straps and trapeze and Russian bar and trampoline acts—all the things that you would expect at a Cirque show,” explains Scene Director West Hyler. “But they take place inside a very real story about a filmmaker, his lead actress and the composer who’s scoring the film.”

More pieces of the puzzle come into place in the afternoon, when Paramour’s entire cast of 38—not just the acrobats but also musical-theater actors, singers and dancers—performs its first stumble-through. The band is in the audience and meeting the rest of the company for the first time; 20 makeshift tables have been set up over the auditorium’s red velvet seats and are crowded with computers and mixing boards to meet the show’s complicated technical demands. If Cirque can pull this off, it will be an unprecedented merger of circus spectacle and musical-theater narrative. “I’ve always believed in having a story that you are as much interested in as the acrobacy—that if those two worlds could combine, something really magical could be created,” says Hyler. What follows are some glimpses of how that magic happens. 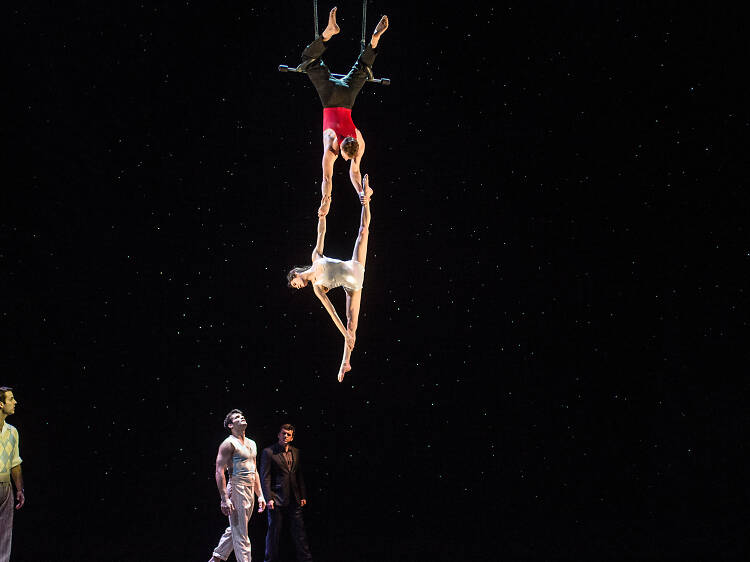 Photograph: Lauren Spinelli
This pivotal hand-to-trap sequence illustrates the leading lady being torn between romantic rivals. “Sometimes we use acrobatics to reveal the inner psychology or to physicalize the emotional and psychological struggle of the characters,” says Hyler. “It’s like the dream ballet in Carousel, which is a musical trope that’s been around forever, except we’re taking that idea of a dream ballet and making it a dream trapeze act. The same characters are embodied by different artists who have the skills necessary at those points in the story.” 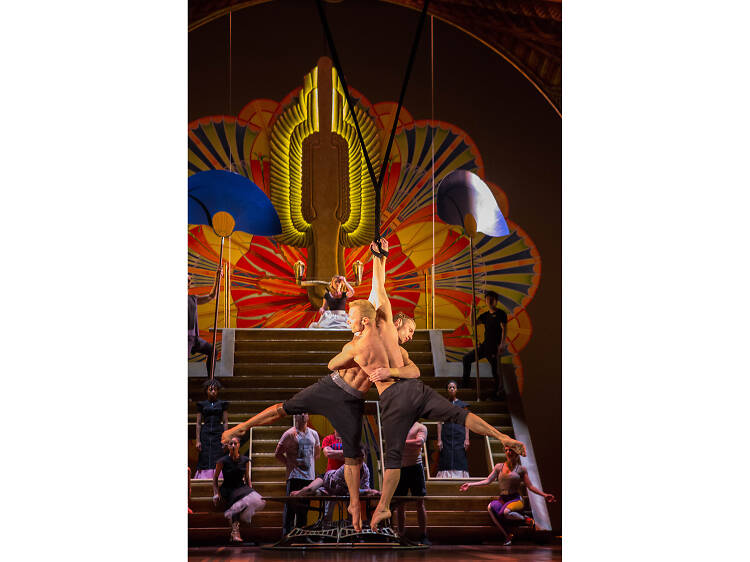 Photograph: Lauren Spinelli
One of the most striking sequences in Paramour is a breathtaking aerial duet between English twin brothers Andrew and Kevin Atherton, who are suspended directly above the front rows of the audience. The Athertons don’t use safety cables; they rely entirely on their own strength to stay in the air. “This is not Spider-Man or Peter Pan—one of those shows where you have an actor in a harness,” Hyler points out. “These are people who have trained their entire lives to be able to do this. And it’s amazing.” Andrew credits the deep mutual trust between him and his brother for their success with Cirque du Soleil, for which they’ve worked in multiple shows over the past 15 years. “I wouldn’t say it’s a twin connection, but we’ve been working together so long, and I know that he’ll put my safety before his,” he says. “So then you can concentrate on making the act emotional and beautiful, not on thinking, Is this safe? We’re always adding elements of danger into our act and choreography to make it more spectacular.”
Advertising 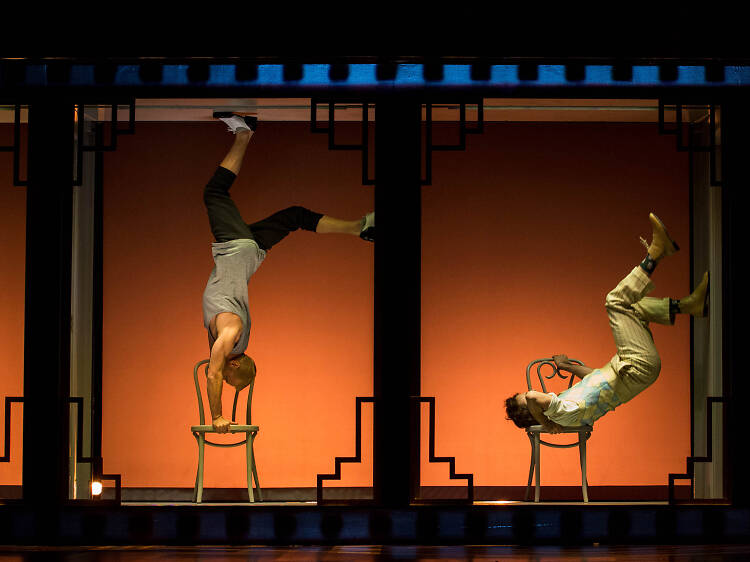 Photograph: Lauren Spinelli
In addition to its plot, musical numbers and circus spots, Paramour contains a number of sequences built around eye-catching visuals. In one, the face of leading lady Ruby Lewis is amusingly green-screened onto a variety of famous movie posters; in another, bright-orange interconnected rooms are deployed to evoke gradual movement across a film strip. 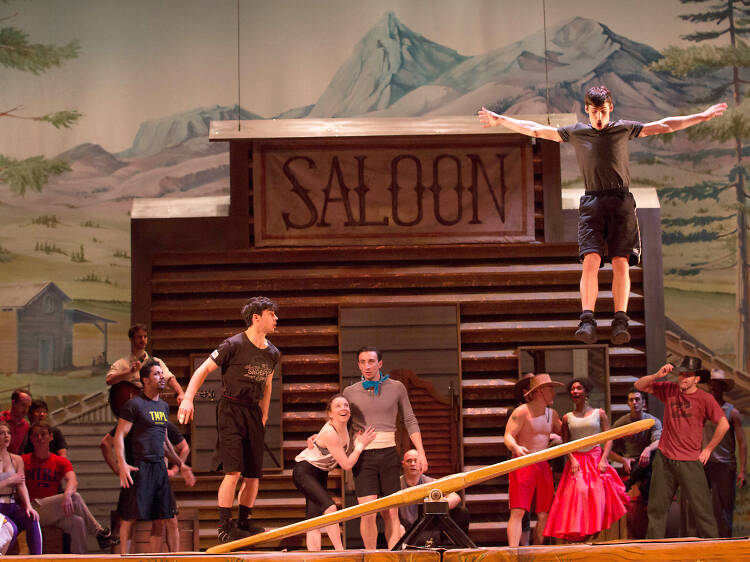 Photograph: Lauren Spinelli
Some of Paramour’s most circusy moments are set up as parts of movie-musical numbers being shot by the main characters. “They’re making films in which the actress is the star, but she’s surrounded by an acrobatic ensemble,” says Hyler, adding that some scenes are inspired by sequences in classic Hollywood musicals. Michael Kidd’s inventive Western-themed choreography for 1954’s Seven Brides for Seven Brothers, for example, serves as the jumping-off point for Paramour’s teeterboard act, an homage that significantly raises the athletic component. (It includes a quadruple flip.) Thick safety mats are disguised to look like wooden scenery.
Advertising 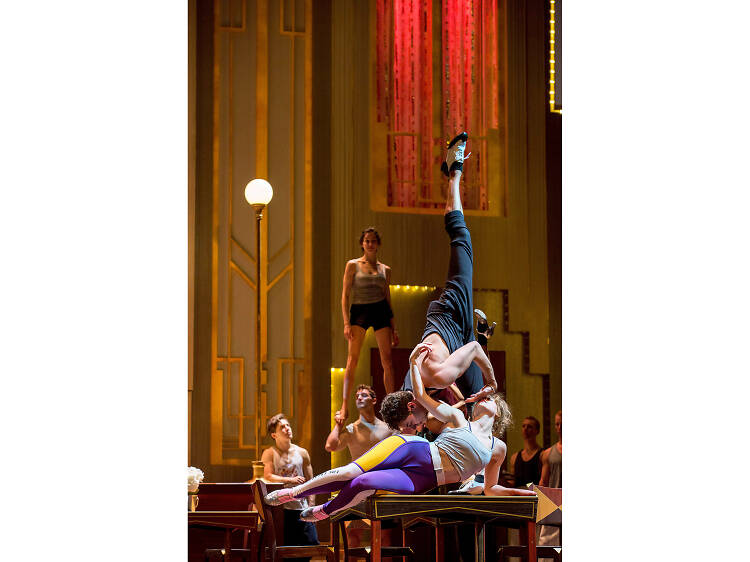 Photograph: Lauren Spinelli
Circus performers comprise a little more than half the cast; the rest of it consists of more traditional musical-theater folks, such as Reed Kelly and Kat Cunning (pictured above). To smooth out that division in the ensemble, the creators have tried to find acrobats who can dance and act a bit, as well as chorus members with special skills. “We have a few dancers who have a gymnastics background or are very flexible,” says Acrobatic Designer and Choreographer Shana Carroll. “Some of them can do back handsprings and flips, which helps everyone blend well.” 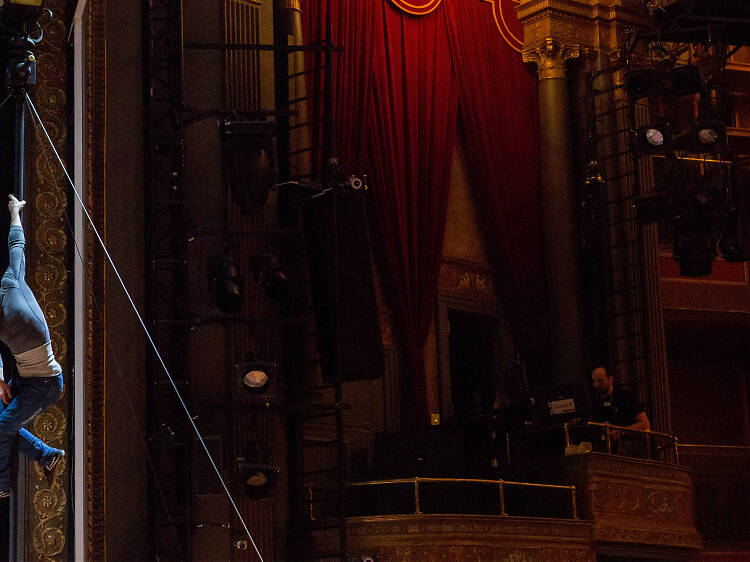 Photograph: Lauren Spinelli
The Chinese pole, a popular circus discipline, features prominently in an Act II dream sequence. “We call it ‘The Nightmare,’ but it’s actually a revenge dream for the movie director,” says Carroll. “He imagines a horror movie with zombies attacking Joey, his rival. It seems like a happy park scene, but then zombies come up through manholes and attack.” Practicing it here is Jeremias Faganel, a Chinese-pole specialist from Argentina. Thanks to Cirque du Soleil’s worldwide recruiting pipelines, nearly all of the acrobats are from foreign countries, including Australia, Norway, France and Poland.
Advertising 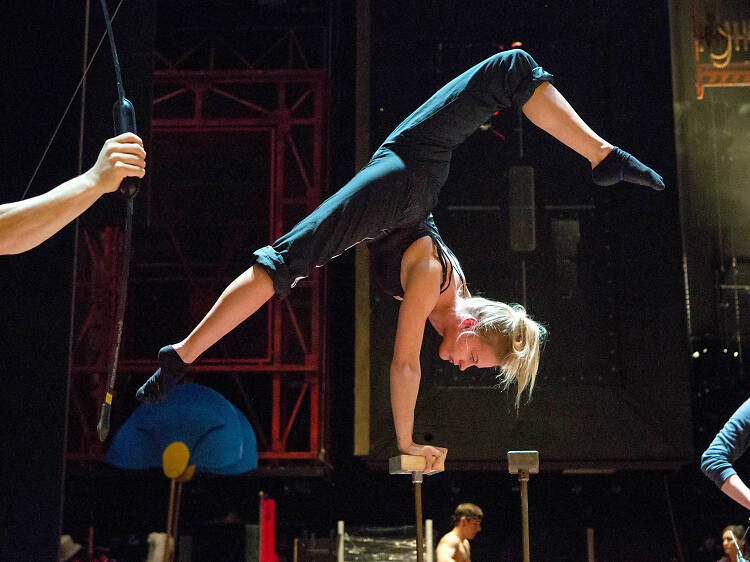 Photograph: Lauren Spinelli
Acrobatic flier and hand balancer Amber Van Wijk just turned 21 years old, and she already has one Cirque du Soleil show under her belt. “I was touring for two years with Varekai when I was 16, and then I went back home [to Antwerp, Belgium] to finish high school,” she says. “Then they offered me this contract in New York. I’ve always wanted to go there, and it was perfect timing, so I was like, ‘Yes!’” She hasn’t had the chance to explore the city much yet—the rehearsal schedule is exhausting—but she did get to see a musical on Broadway, which helped her understand how Paramour works. “Pretty much every trick you do in the show, every movement, there’s a story behind it and a reason you do it,” she says. “That’s very different from my previous experiences. In Varekai, you could kind of hide behind the amazing costumes and makeup. On Broadway, people see you from so close.” 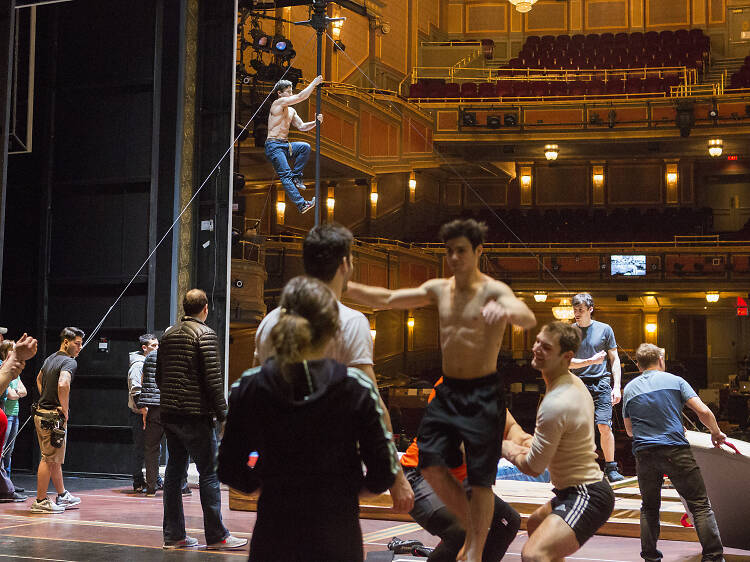 Photograph: Lauren Spinelli
“Even though it’s a very large cast for a Broadway show, it’s a very small cast for a Cirque show, where usually they can have up to 70 acrobats, but they’re mostly specialists,” says Carroll. “I had to find a really all-star ensemble—people who I knew could perform up to five disciplines—or we wouldn’t be able to have enough acrobatic material.” Fletcher Blair Sanchez, seen here on the Chinese pole, is also highly skilled at teeterboard, trampoline and tumbling. “That’s rare, and I love the cast I have for that,” she says. “They’re covering so much ground. They just blow my mind every day with how talented they are.”