“Fuck that guy,” Jason Biggs says of his tardy Heidi Chronicles costar Bryce Pinkham while sitting in a corner booth at famous theater hangout Sardi’s. “Let’s get started.” Biggs, best known for the American Pie movies and Orange Is the New Black, plays Scoop, an on-again, off-again love interest for the title character, played by Elisabeth Moss. Pinkham, a Broadway vet who recently earned a Tony nom for A Gentleman’s Guide to Love and Murder, is Heidi’s lifelong confidant, Peter. Ah, good. Pinkham is here. Let the back-and-forth ribbing commence.

This play encapsulates a particular moment in the late ’80s, and Wendy Wasserstein is often labeled a feminist playwright. As men, what relevance have you found in the play today?
Bryce Pinkham: I’ve found that it’s about much more than “women’s issues”—it’s about human issues.
Jason Biggs: One of the themes that stands out to me is happiness and how you define it. I am getting older, I’m married with a kid, and whether I like it or not, I’m growing up. And these questions start to pop into one’s mind. Did we do what we set out to do? And are we happy where we are? I think audiences will be forced to ask the question: How much has changed in the 25 years since the play was staged?
Pinkham: I’ve been thinking a lot about my mom.
Biggs: I have too.
Pinkham: Wait, you’ve been thinking about my mom?
Biggs: Yeah, which is weird.
Pinkham: We should talk about that off the record, because that feels, to quote a line from the play, “in the realm of the personal.”
Biggs: It does seem that way.
Pinkham: I’ve actually been thinking a lot about Jason’s mom, too.
Biggs: That makes one of us.

You’ve both been on Broadway a number of times. What’s the one thing you can’t prepare for?
Pinkham: The stage door, and the immediate interaction you have with your audience. For every 100 people you meet that are super nice, there’s always one where you say, “I wish this hadn’t happened,” but otherwise…
Biggs: There’s always one lurking with an ice pick in the corner.
Pinkham: Or they’ll ask you some question, and you’re like, “How do you know that about me?” Google should not have told you that.
Biggs: I know Google didn’t tell you that, because I google myself all the time, and that’s not out there!

Show casts have different backstage demeanors—playful and chummy, professional and studious. What has the vibe been so far?
Biggs: I feel like there’s me, and then there’s everybody else.
Pinkham: I was going to say, without Jason, it feels like a family—a family with an adopted son that doesn’t know he’s adopted.
Biggs: Wait, what? I thought you were going to say an adopted rescue pit bull—one that was beaten, left on a chain in a yard in South Central for the first four years of his life.
Pinkham: “Just don’t touch him, don’t touch him!”
Biggs: “He looks cute, but he bites.” There’s also something with any project—it starts with that No. 1, and it trickles down from there. And Lizzie [Moss] is just cool—loves everyone, wants to laugh and has that show-family mentality. She doesn’t take herself or any of this too seriously but is an absolute professional.
Pinkham: The lead really leads, and Lizzie has done that in a beautiful, subtle, smart way.

In the play, Heidi delivers an extemporaneous address to a group of her fellow alums. If you had to get up in front of your peers, what would you say?
Biggs: I’d probably do about 20 minutes of armpit farts. I have lots of levels, and I can do my leg, I can do my neck. In fact, we’re here at Sardi’s… [Performs a neck fart] That hurts, so I can only do three minutes of that.
Pinkham: I find that a lot of my peers and alumni younger than me have these blinders on. I would want to help get rid of those. Acting feels a bit icky because it’s a selfish enterprise, but how dare you make it all about you. Take responsibility. You don’t get to complain unless you take responsibility for whatever problem you’re complaining about: the environment, civil rights, whatever. There’s a giant world out there that needs your help.

And if that fails, there’s always armpit farts.
Pinkham: Well, you’ve got to make people laugh along the way, or why are we here? 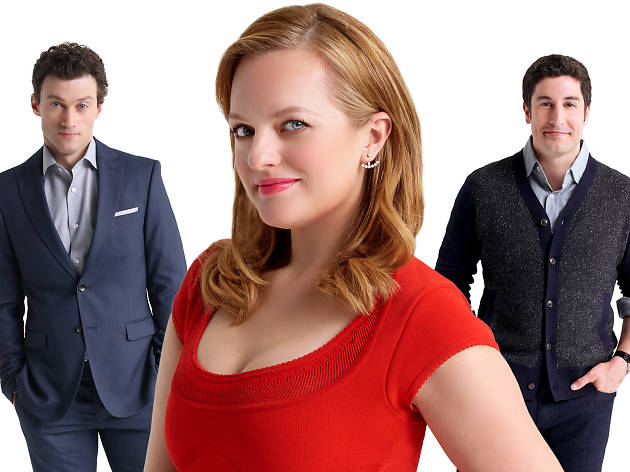 Wendy Wasserstein's hit play (winner of the Tony, Pulitzer and other accolades) follows the life of Heidi Holland from the 1960s to the 1980s, from early feminism to a career as an art historian. Elisabeth Moss (Mad Men) takes on the title role in this Pam MacKinnon–directed revival. Bryce Pinkham, Jason Biggs and Tracee Chimo costar.