Michael C. Hall on singing for Bowie, spoiler alerts and the “playground for the rich”

In Lazarus, Hall embodies the biggest outsider of his career: an extraterrestrial first famously portrayed by David Bowie

If you ask Michael C. Hall, being known worldwide for playing a convincingly charismatic serial killer is every bit the head trip it sounds. “It’s existentially challenging,” he says with a laugh. “People have told me that they relate to the character and that they have their own homicidal fantasies that the show’s soothed.” Creepy.

When he’s off the clock, the 44-year-old is a low-key kind of celebrity who could be mistaken for an average guy if his clothes weren’t just that much nicer and his looks that much more handsome. Sitting by the window at a West Village coffeeshop not far from his home—we won’t say which spot, because, you know, creepy—the former Dexter star isn’t attracting any scarily devoted superfans, but he’s still drawing glances from the clientele over their flat whites.

The roles Hall takes tend to be far from the fairly normal guy he seems to be, whether it’s a vigilante forensics analyst on Dexter, a gay funeral home director struggling with his sexuality on Six Feet Under, a glam-rock gender bender in Hedwig and the Angry Inch or the reason for our chat today: an extraterrestrial captain of industry in new Off Broadway show Lazarus.

“I had no mission statement to have a certain number of characters surrounded by bodies,” he says. “It’s just the way it’s unfolded. I just take it as it comes, and this seems to be what keeps coming. But, yeah, I do seem to find myself with the chance to play characters who are in their ways singular or odd or isolated or extreme.” 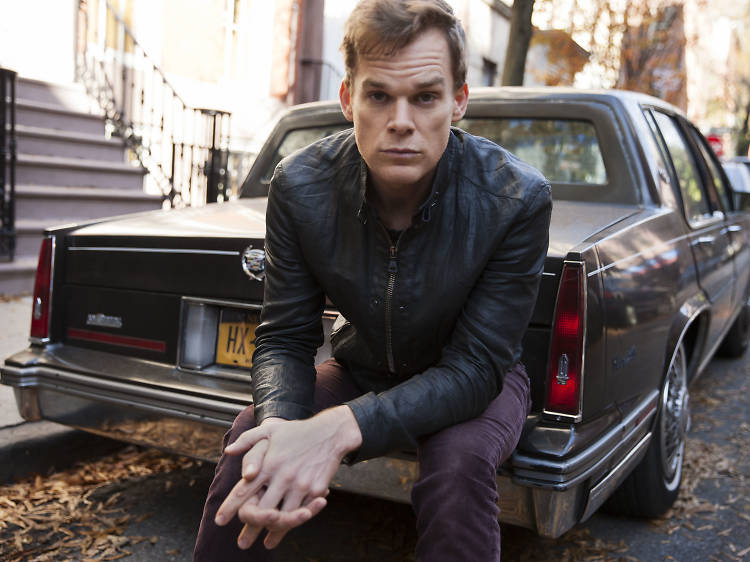 
Hall plays one of his most atypical roles yet in Lazarus, an adaptation of Walter Tevis’s 1963 novel, The Man Who Fell to Earth, with a script cowritten by Enda Walsh and direction by Belgian visionary Ivo van Hove. Not only is Hall tackling the character David Bowie nailed in Nicolas Roeg’s 1976 film adaptation, but he’s also singing a selection of Bowie songs, including some that were written specifically for the stage show and have yet to be performed in public by anyone—even Ziggy Stardust himself.

Hall admits that it’s all slightly surreal. “I met him probably a month or so before we started rehearsals and sang through most of my stuff,” he says of working with Bowie. “And it was a very heady experience to sing Bowie songs in an East Village apartment for Bowie. I had to turn off a part of my brain just to keep my head about me.”

As unnerving as that proposition might seem, Hall says that the rock icon’s been remarkably easy to collaborate with. “He’s very supportive and enthusiastic,” says Hall. “This is a new experience for him. I’m sure people have been enticing him to do something like this for years. Having him there at our little run-through, sitting front and center—it was somewhat nerve-racking, but in a way, it’s nice. What more is there to fear?”

Despite working from the same source material as the film, not to mention Bowie’s involvement, Hall insists that Lazarus will be “its own organism.” The play picks up with Newton where the movie left him, well after he gave up on his mission to bring Earth’s water to his own drought-stricken planet and succumbed to the sad, decadent lifestyle afforded to him by Earth’s market for alien technology. “A great number of years have passed,” says Hall, “and he’s in a state of self-imposed exile, in a world that he meant only to visit and can’t leave, and is in a bit of a prison of his own making, a prison of his own mind.”

A one-percenter from outer space might seem like a tough sell to an audience, but Newton’s a far more relatable character than his traits might suggest. “The name of the film is The Man Who Fell to Earth,” points out Hall, “not The Alien Who Fell to Earth. He comes to planet Earth and falls victim to appetites and ego and longings that are fundamental to any human’s experience. He’s simultaneously singular and an everyman.”

“I had no mission statement to have a certain number of characters surrounded by bodies.” 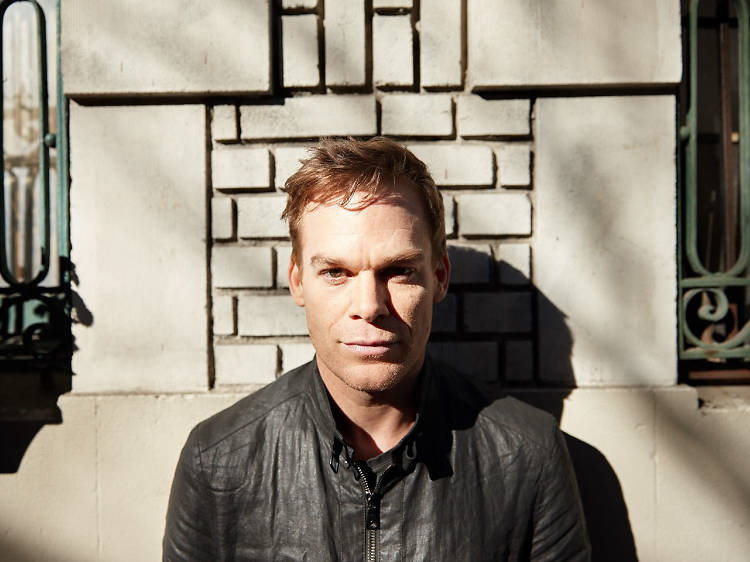 
The actor describes Lazarus’s staging as “some sort of mash-up of the realistic and the existential” and “as much an interior as an exterior landscape,” but he’s not willing to give away much more. Maybe he got used to keeping secrets during Dexter’s age of spoiler alerts. “It was kind of miraculous that we were able to keep things under wraps on Dexter,” he says, “given how many people were involved in making that show. I mean, we were never required to sign a nondisclosure agreement. We had watermarked scripts and cover letters that said please don’t divulge any story secrets, even to your family or significant other.”

As awkward as it can make interviews, during which he has to talk around the main reason he’s being, you know, interviewed, Hall understands why people don’t want their entertainment predigested. “It’s unique,” he says, “in a day and age when we’re advertised to so much, to go somewhere without any preconceptions about what you’re about to perceive. I think there’s a desire to preserve that. I’m all for that.”

Lazarus is at the New York Theatre Workshop, which Hall says “feels like coming home” after years of work in film, television and Broadway. The North Carolina native moved to NYC in 1993 for the Graduate Acting program at NYU. “I don’t think what I was able to do in 1993—coming here, living in the far East Village and going to grad school without being completely crippled with debt—would be possible now,” he tells me. “Of course, when I got here, the conversation was the same. Everyone was telling me how great it used to be. Maybe that’s just perpetual,” he says. “But there are times when Manhattan just feels like sort of a self-congratulatory playground for the rich. That can be distressing.” Hall certainly seems uninterested in that kind of environment; he says one of his favorite things to do in the city is walk his dachshund-spaniel mix Sal (short for “Salamander”) every day in Washington Square Park.

For the time being, he says he’s more or less living at the theater. Lazarus is taking up so much of his headspace that Hall seems a little disoriented when I bring up his upcoming project Christine, the Antonio Campos film about news anchors in ’70s Florida that’s slated for release next year, before his secretive reflex kicks in. “I’m not even sure what I’m supposed to say about it,” he tells me. “Something happens.” Fair enough.

As we’re finishing up our coffees, the conversation comes back around to the intense, Internet-enabled fandom surrounding Hall since Six Feet Under. I ask if there’s anything he’s a fan of, on a writing-fan-fiction level. “The real superheroes for me are musicians,” he says, not missing a beat. “Bowie, for example, is someone who has sort of mystical superpower status in my mind, in terms of what he’s created. He’s able to be simultaneously impenetrable and completely revealed. It’s magical.” After our talk, I realize some could say the same about Hall.