Neil Patrick Harris interview: “You might as well own the spotlight”

Goodbye, ducky tie; hello, heels: The TV star returns to the stage with a primal roar in Hedwig and the Angry Inch 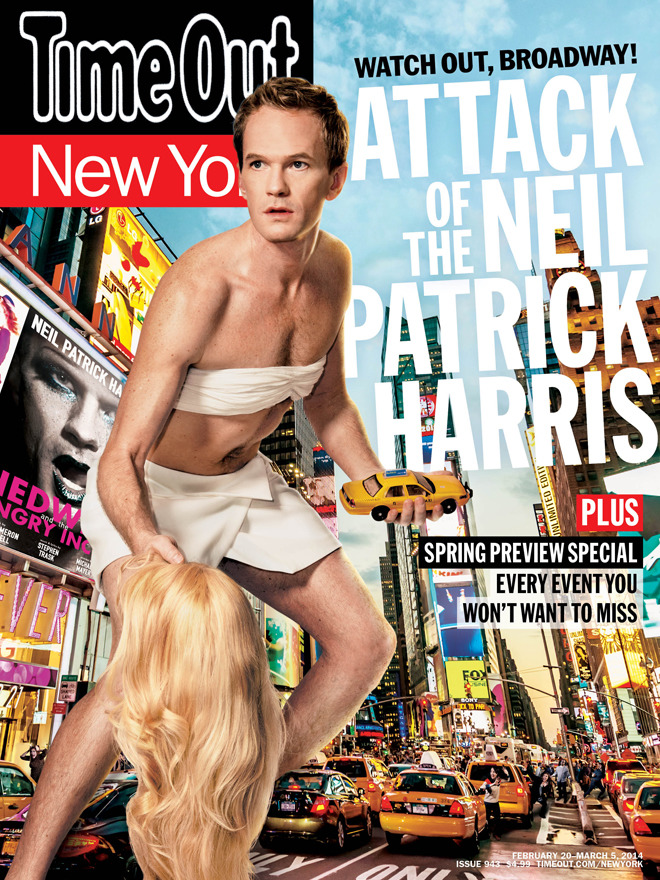 When you’ve been wearing nothing but a suit and tie for nine years, what do you put on next? Try a big blond wig and enough glitter to give Kinky Boots a run for its money. Next month, Neil Patrick Harris will wrap nearly a decade as charming lothario Barney Stinson on How I Met Your Mother and take on his first Broadway role since 2004: the title part in gritty glam-rock musical Hedwig and the Angry Inch.

John Cameron Mitchell and Stephen Trask’s tuner follows the fortunes of a transgender rocker who escapes Communist East Germany via a botched sex-change operation (guess why the inch is so angry), comes to America and goes on a quest for self-fulfillment. Hedwig turned heads when it hit the Jane Street Theater in 1998; with Mitchell in the main role, the show won two Obies and an Outer Critics Circle Award. Since then, there’s been a movie, a West End iteration, and countless productions in black boxes and dive bars all over the world—but never on the Great White Way. Until now, in a new version directed by Spring Awakening’s Michael Mayer.

So how will this hard-living “slip of a girly-boy” who belts out bangers about disfigured genitalia fare on play-it-safe Broadway? We talked to Harris about stepping into Hedwig’s heels, his transition from TV to stage and his upcoming move to NYC. 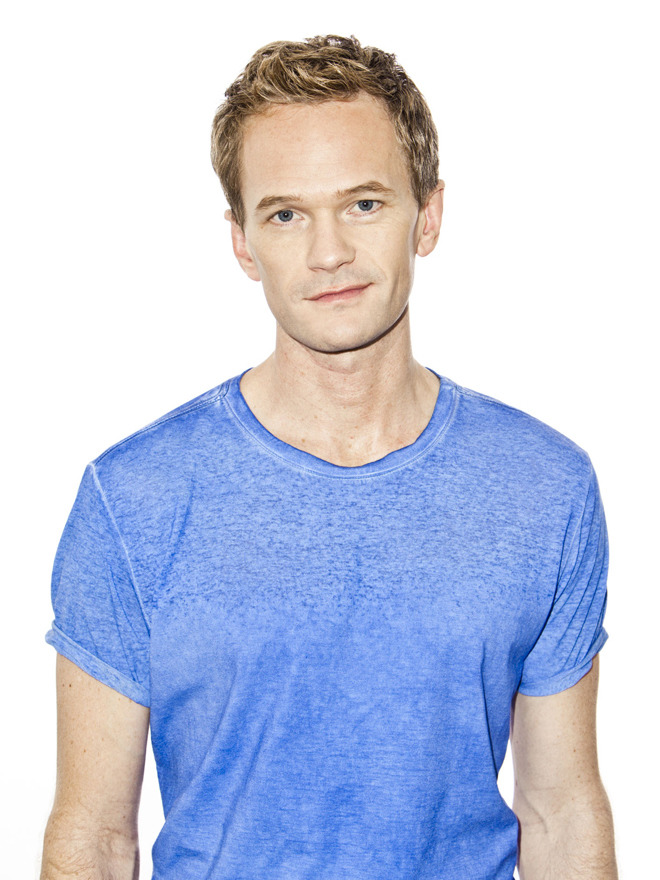 What made you pick Hedwig for your big return to Broadway?
I love the music—it’s remarkable in its intricacy. It’s punk, and the lyricism is super poetic. And physically, I’m intrigued by the process of transformation—having to become someone of a different gender. To be such a broken, fractured spirit, and to play with the idea of how that turns into recovery. It seemed like an odd, and yet appropriate, left turn from Barney Stinson.

It seems about as far from Barney as you can get.
And yet, there’s an equal amount of bravado in Hedwig. So I don’t feel like it would be leaving one big personality behind to go to something much subtler. It’s a different but equally impressive tightrope to walk. And I figure if you’re going to spend 20 weeks doing a show, you might as well own the spotlight. And that’s what Hedwig is desperate to accomplish. It’ll be a full-body spring and summer, that’s for sure.

What have you been doing physically to prepare?
Throughout the last three months, I’ve been working with Spencer [Liff], the choreographer, on finding a physicality for the character that isn’t gonna make me feel insecure when I’m stomping around. Because it’s less about a polished piece—it’ll be a little more free-form. We’re trying to come up with a movement vocabulary that I’m comfortable doing, so if I wanna ratchet it up a few notches, it won’t feel new and uncomfortable; it’ll still feel like it’s in Hedwig’s body. It’s a once-in-a-lifetime opportunity—[to play] that overt a character on a Broadway stage. And it’s not pretty. It’s nasty and rugged and dangerous, and I think that’s exciting for Broadway.

Has the show been changed at all to account for the fact that it’s at the Belasco, rather than a small downtown theater?
We didn’t want it to seem out of place. John [Cameron Mitchell] and Stephen Trask say in the script that whoever’s performing this, make sure that they acknowledge whatever space they’re in. Like, why isn’t it this at a little theater, or a dive bar? So we’ve come up with a good idea for why she’s at the Belasco: She’s still following Tommy Gnosis, the love of her life, around; he’s doing a free concert in Times Square, and she’s desperate to find any space that is nearby.

The role is a vocal departure from your past musical-theater work—much more rock & roll. Do you have a strategy for not shredding your vocal cords?
It’s rockier than I’m used to, but it doesn’t have to be perfect, you know? If it’s a little scratchy or if it’s a little tired, so is Hedwig. Not to say that I’m not going to be doing my best, but it’s not going to be Gilbert and Sullivan. [Laughs] We have an amazing sound design that’ll keep me able to sing softer, and preserve my voice a little bit. As I don’t have an understudy, I need to be on point every show.

Wow, working without an understudy—that has to be intimidating.
I’m not that worried. It’s not a terribly long run, and it seems like I can go on and do the show regardless of circumstance. Knock on wood that I stay healthy.

Do you have a plan for keeping yourself in shape?
I’m planning on hibernating in my off-hours and laying low so that I can brang it on the stage. It’s funny, because the part is so self-destructive and hard-core, and yet it’s not the kind of role where I’ll be able to go out drinking afterward or be underslept. But that’s actually gonna be kind of easy to do, given that we have a family and little kids [Gideon Scott and Harper Grace, both three] that wake up early. It’ll definitely be a bipolar existence: being a family man with David [Burtka, his husband] and the kids in the day and being a super hard-core punk rocker in the evenings.

What appeals to you about Hedwig as a character?
She’s so guarded and over everything, and yet is desperately seeking some sort of completion. She’s always believed that there is someone else who would make her whole. That’s relatively universal. It’s interesting to see why someone is damaged, and Hedwig’s journey to self-realization—that you are perfect in your imperfections—is a great thing to see. [Laughs] I laugh because it sounds like it’s making a real strong moral statement, but it’s not, like, this big self-realization musical. But it grounds it for me, as opposed to just stomping around in a silly costume.… And FYI, the costumes are awesome and far from silly.

What are they going to look like?
They’re gonna be markedly different from the other productions, which all use the same kind of imagery. And yet it’s the same gang that did John’s original production and the movie. The costume pieces are really well thought-out and well designed, even though they’re still piecemeal. They can’t be massive costumes that [Hedwig] couldn’t afford. But then again, she’s pretty ostentatious. They’re gonna be rad. And the wigs are fabulous too.

Have you talked to John about his original performance?
Absolutely. He’s a terrifically nice guy and kind and gentle and creative, and a true artist. And he’s given me carte blanche liberties to ask him anything. Stephen Trask too. It’s a really lovely feeling to be able to do this with them so involved. It makes me feel like everything’s okay, as opposed to, We’re stepping on toes. 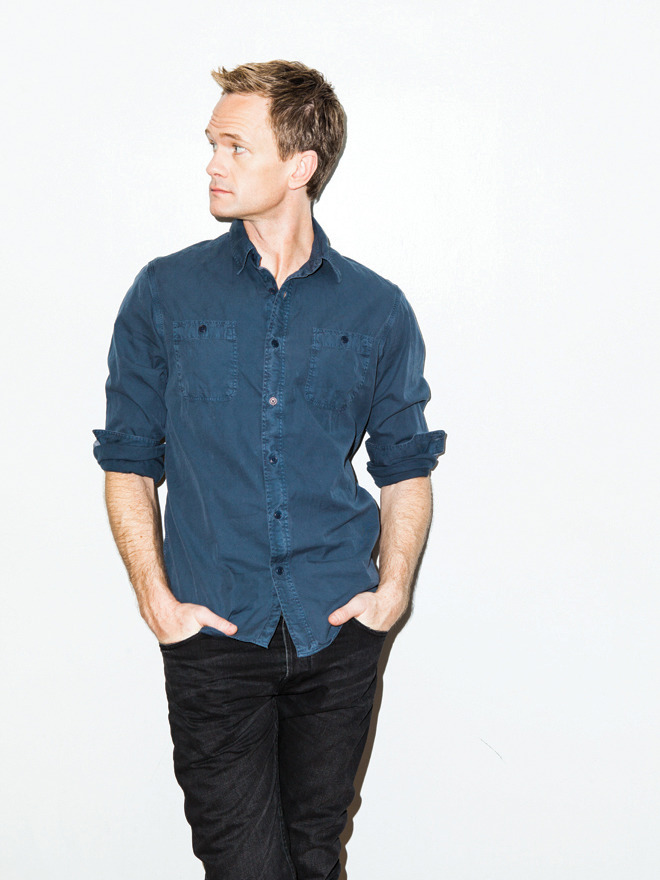 You’re also moving to New York. What made you want to live here?
I love that you’re required to interact with the city. Since you walk most places, there’s an energy that is constant. I want our kids to be a part of that melting pot. And I really love the people here. When they struggle through the cold, cold winter, they’re so enthusiastic about the spring. That shift of enthusiasm to me is… It’s life.

Yeah, I bet it’s easy to take nice weather for granted in L.A.
It’s gorgeous all the time, which is fantastic, but you suddenly go, “Wait, it’s Halloween? It’s 92 degrees outside!” I’m looking forward to seasonal shifts. But you’ll probably have to ask me again in August, when it reeks of urine and sweat is pouring down my back as I carry my groceries up five flights of stairs.

How does it feel to be finishing up How I Met Your Mother?
I’m so proud of the show, and it’s wrapping itself up with great respect to our fans. We start [taping] the final three episodes next week. It’s probably the best job on TV, to get to play a role that’s as crazy as Barney, yet so stylish. Whether or not he’s being a jerk, he is by his own definition awesome. What a fun thing to play: someone who’s damaged, but just thinks he’s fantastic. And I get to act with an amazing cast of people, and fall in love and spend my life with Cobie Smulders [who plays Barney’s fiancée, Robin], which is the greatest gift any human being could have.

Will you be doing more stage work going forward?
I’m not really sure where things are gonna go after this. I’m anxious to settle a little bit. My life has been wonderfully filled with lots of things happening simultaneously, and that’s the greatest blessing professionally. But it would be nice to enjoy the culture and not have to be the one performing. I can’t wait to do Hedwig, but I’m also excited to live in the city. And if that means not working for a while, that’s super okay with me. We’re in renovation on our townhouse that we purchased. When How I Met Your Mother is done, we’ll all head this way.

Do you have any dream roles?
Well, I’m a variety-arts guy in my heart. I spend a lot of my off time doing that weird stuff—trapezing and magicking and juggling. So I would love to do something like [1980 musical] Barnum someday. I’d love to get Diane Paulus to direct a cool revival with lots of actual circus stuff.

When did you first fall in love with theater?
One of my favorite shows of all time is [1989 musical] City of Angels. I knew I loved the theater when that whole set turned from black-and-white to color in, like, five seconds. When that gave me an erection [Laughs], I knew that the theater was my home. 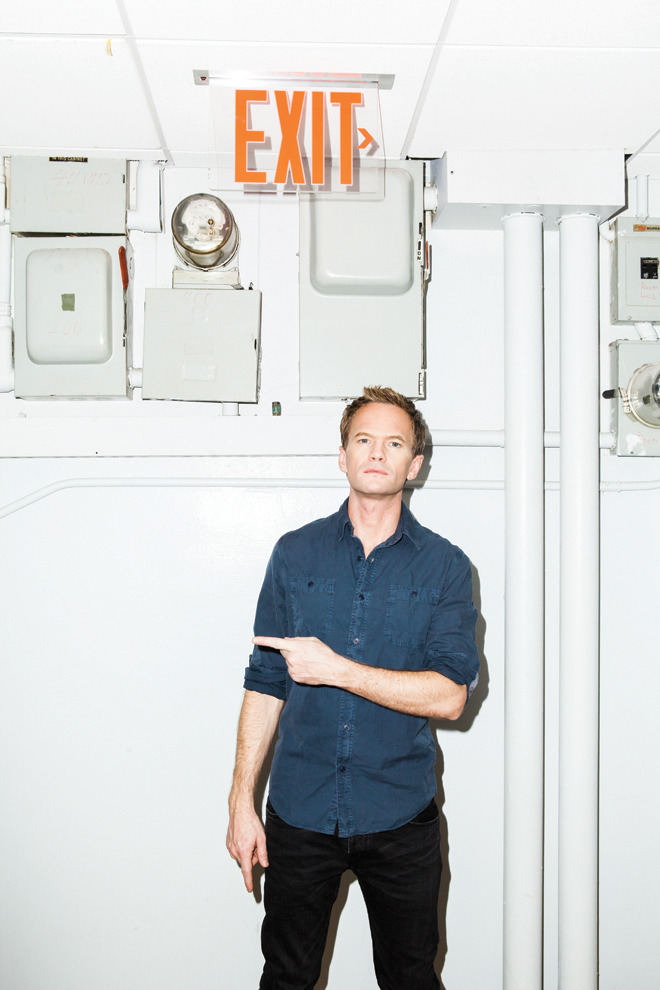