Taylor Mac will blow your musical mind for 24 straight hours

Taylor Mac has been freaking out the theater world for years. Whether dressed to the elevens in outré glam-drag performance-art pieces, or subverting gender and genre as a playwright (notably of 2009’s The Lily’s Revenge and 2015’s Hir), Mac has championed an expansive sense of theatrical event. Since 2011, the artist has been developing a decade-by-decade survey of 250 years of American song, weaving yesteryear’s music into some of the decade’s best cabaret shows—and lassoing audiences along for the ride. (In the episode devoted to the 1820s, when Braille was invented, the crowd spent the whole show blindfolded.) At St. Ann’s Warehouse this fall, Mac will perform A 24-Decade History of Popular Music as eight three-hour acts on different nights, leading up to a single 24-hour marathon on October 8.

How do you rehearse a 24-hour show?
Our way of doing it was to work on the show for five years, and rehearse it piece by piece in front of an audience. It’s more than just a 24-hour durational piece; it’s really a five-year performance work [Laughs]. We just did a 12-hour show, and learned a lot. I’m going to do an 18-hour show on my own, without any of the other musicians or performers, to see what happens to my body when my sleep time starts to get eaten away at. But the first time we do the 24-hour show will be the first time we’re performing it for 24 hours.

A lot of your work has to do with a tension between individualism and communitarianism. Is that something you think about specifically?
When I first started, the art was about trying to be the oddest-looking person in the room: If the audience can relate to the oddest-looking person in the room, then maybe they can open up their understanding of themselves and embrace a little more heterogeneity, as it were. There’s still an element of that, but now it’s more about trying to make the whole room odd [Laughs]. Everyone onstage is an oddball, and we try to invite the audience into that world.

That involves a lot of audience interaction. It’s almost immersive theater.
That is such a big part of it. Because when people do things together, then they have to talk about it—they compliment each other on the thing that they did or they talk about how ridiculous it was or how they didn’t like that part. It’s something that they’re helping to make in a pretty profound way, and it grounds them in the bond that they make. In the 24-hour show, we want people to stay for the entire thing because the art is primarily about what happens to the audience during that 24-hour period. If people come and go we’re not going to be able to experience that.

One thing I‘ve loved about the single-decade segments has been that each of them has its own themes and gimmicks.
Yeah, and the eight acts have their own little arcs as well. I have a three-tiered approach: You honor the past by doing it, to the best of your ability, how it was originally done; you honor the present moment by deconstructing shit, because that’s what we like to do now; and then you make something out of it, to help bring the culture forward. So those are the things that I’m always thinking about trying to do—and making sure that there are moments where we just sing a song, because that is also part of the shows. It’s not all performance art; there is a concert element to it. We’re working on giving variety. I don’t want just one thing, ever.

What decades have you found the most challenging or the most exciting?
The earlier decades are harder because there’s less that’s available to you. I really think about what I want the decade to be about and then I go on a hunt for songs. That’s what the project is about: looking for a radical spirit throughout our history. People say, “You can’t be too hard on Stephen Foster for writing minstrel songs because he was a product of his time.” But I say, there were other people who were a product of his time—Sojourner Truth, the Grimké sisters, Harriet Tubman and of course Walt Whitman—who were way more radical and amazing than Stephen Foster, and none of them were writing minstrel songs.

I thought about that when I saw Hamilton on Broadway, because what you do also involves inserting neglected communities, especially queer ones, into the narratives we’ve inherited.
Right. But I think the difference is that Hamilton is obviously using metaphor as its driving force and I don’t think I am using metaphor as much. What I think I’m actually saying is: There were queers back then! Whether or not the actual [story I’m telling] is real, the circumstance of two men fucking in the 1830s is real, right? [Laugh] Just because they hadn’t coined the term homosexual, doesn’t mean there weren’t queers. So let’s go looking for them!

On a panel we were on together once, you said that you were surprised to find yourself in the role of the antagonist in that discussion. How much of that role do you embrace?
I am working in the tradition of the fool, in the sense that I’m the person in the court who hopefully is looking for whatever the power structure is in the room, whether it be a king or the cool kid on the block. I’m looking for the power structure and trying to call it out for what it is. Even if it’s my power over the room! I tend to think of the fool as outside protagonist and antagonist. That’s what makes it exciting to me. I’m not really the hero and I’m not really the demon, but I’m a little bit of both. Really the audience is the hero in this piece and they are the demon in this piece, and history is the hero and the demon. I’m kind of a facilitator.

One of your mottos has been, “Perfection is for assholes.” How much imperfection should audiences expect?
I’d say 80% of the show is something I’ve made decisions about and we’ve rehearsed over five years, and then 20% is, “What’s gonna happen?” There’s an element of chaos that we hope to balance out with really good craft and technique. Yeah, I’m gonna forget lyrics—in the 246 songs, something’s gonna get forgotten—but I’m not singing with a monitor or a script up there. I’m making a 24-hour show that I’m performing, and part of the art of it is that we are falling apart together. If we polish it to a degree that we’re not allowed to fall apart, then we’re really not doing the art we’re setting out to make. But we want it to be not just, like, a mess, you know? [Laughs] And it never has been. 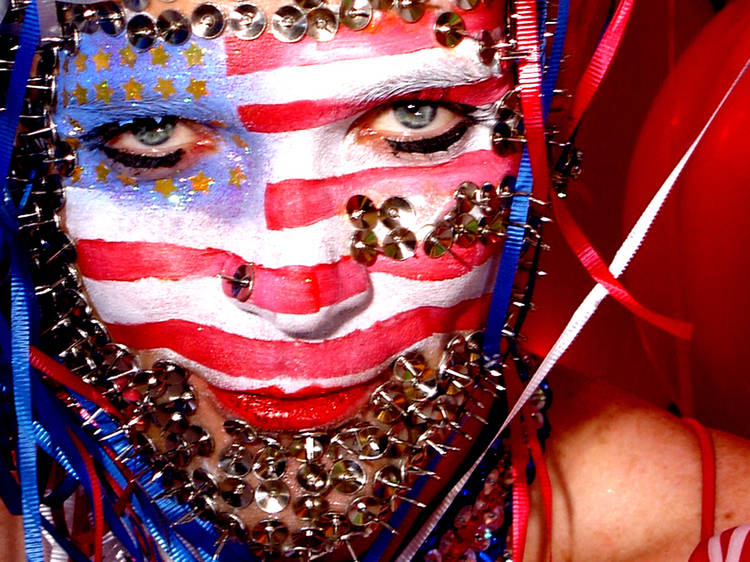 A 24-Hour History of Popular Music

A Fabergé radical—beautiful, ridiculous and full of hidden tricks—the sublimely freakish Mac pilots audiences through fantastical journeys, guided only by the compass of his magnetic individuality. In the culmanation of a project that has been in the works for the past five years, the performer surveys the past 250 years of American music, first in eight three-hour installments and then, on October 8, as a 24-hour marathon.