Beloved novelist, essayist, blogger, professor and Twitter queen Roxane Gay became a household name with her wryly philosophical and resolute book Bad Feminist. This weekend, she comes to town as the keynote speaker for the giant PEN World Voices Festival of International Literature. This year’s weeklong spring festival explores the theme On Mexico through dozens of literary events—including a discussion on Chicano/a culture, a celebration of female Mexican authors and a conversation with Salman Rushdie—and culminates with Gay’s lecture on Sunday, May 1. We spoke with Gay about living off the popular literature grid, pushing diversity and the problem with woke men.

You’re traveling to a lot of literary gatherings this year. Why is the PEN World Voices Festival intriguing to you?
I think that it’s always exciting to see international voices celebrated, so I wanted to be a part of it. Freedom of speech is something every writer holds sacred so it becomes even more important to participate.

The lineup is quite diverse. I know you’re asked to speak at conferences often—how do you deal with the pervasive issue of all-male, all-white panels?
It’s something I always think about because it gets tiring to always be the only person of color or the only woman and to see organizers think that’s okay, to see they think they’re doing their part. Because they’re not doing their part—they’re doing the bare minimum. So I always try to find out who else I’m appearing with at events so I can be sure I’m not put into that supremely awkward position. Generally they just don’t get it. They think, But we invited you, and they think that’s enough, so sometimes I’ve had to say, Well you’ll have to find someone else because I just don’t feel like doing it under those circumstances.

Your memoir Hunger is due out later this year. Can you tell me a bit about the book?
Hunger is a memoir essentially of my body. It looks at trauma and obesity and what it’s like to live in this world with an unruly, overweight body. Writing the book has been really difficult, more difficult than I thought. I can write it easily, but it’s imagining other people reading. I generally write pretending other people will never read my work, but this work requires a level of vulnerability that makes me uncomfortable, so that’s a challenge.

How do you move past that?
I just swallow it. I just suck it up. The fear is always there so I live with it the best I can. And I also have boundaries about things I will or will not write about. This is the first time I’ve written something that I think might be useful to other women.

You’re a professor at Purdue University in Indiana. Do a lot of people assume you live in New York City?
All the time. Not a week goes by I don’t get requests that say, stop by our studio! I think, Well that’s going to take a very long flight. People have this misapprehension that all writers live in New York and that’s simply not true. There is this glamorous idea of the New York writer and whenever I’m in New York I am always impressed by the fancy people, but there are those of us who do live outside of New York and somehow manage to write.

In your essay in the leaving-New-York anthology Goodbye to All That, you referred to New York as the city that got away. Is the dream of living here still alive?
No, that dream is dead. I love New York, I love visiting New York, and I’ll always sPENd time in New York, but I also like space, so I’ll never be able to force myself to live in a cramped apartment. I’m 41; I’ve worked too hard.

Are there are negatives or positives being outside of the New York lit bubble?
I don’t really feel any negativity toward being outside of it. Sometimes there’s envy when you see al the events hapPENing, events I would love to go to, but I feel just as able to participate in literary culture from where I live. Granted, it requires travel, but I still feel like part of the conversation. I don’t mind it. People always ask, Why are you so prolific? Well, I live in rural Indiana. I don’t know what you want me to do other than write. I do appreciate that by living here I just get to write and not have to be part of that grinding I see a lot of writers do, just by virtue of being there and being around other writers. I don’t always need to be around other writers.

What’s your advice for aspiring writers in New York that still find the city magical?
I think it’s totally fine to hold that magic because that magic is real. Just remember that there’s a difference between writing ad publishing. Your writing career and your publishing career are different and neither are the measure of your self worth. Just remember to once in awhile write, in addition to just being part of it all.

I’ve noticed you respond to your haters on Twitter rather often. I’m curious as to why you enjoy engaging with them.
I don’t think I enjoy it—it’s just a compulsion. It’s a bad habit. I think sometimes when people say, “Leave it alone, ignore it,” they want to pretend these terrible things are not being said, and this is the reality of being a woman online and you need to bring attention to it. These are the kind of things I hear all day, every day, and it’s even worse in email. I’m not just going to smile politely and eat shit to make other people comfortable. I’m not proud of it per say, but neither am I ashamed. It’s the Internet and they have that right, but I don’t have to smile about it and I don’t have to like it and I don’t have to tolerate it. There’s a point where you just get fed up and I think being fed up is the entirely reasonable response.

I have hesitated to write about the current election because it’s so contentious on the Democratic side, even though I’m going to vote for whoever gets the nomination. But I’m a Hillary girl and proud to be, but unfortunately whenever you talk about that there’s a lot of pushback. Pushback is fine, but sometimes it veers into harassment. But at some point I’ll write about the election, and specifically Hillary.

Why are you with her?
I think she’s extraordinarily qualified for the job. I think she’s got a great skill set, I like her attitude, I like the way she leads. I certainly disagree with some choices she’s made, including voting for the Iraq war, which led to the deaths of tens of thousands of Iraqis. It’s difficult to reconcile that and say this person should lead the country, but I think she should lead the country. It’s wonderful she’s a woman, and she’s probably the most qualified person to run for president in the past 30 years. Though she’s a centrist, I think Sanders pushed her left and liberals will continue to push her left throughout the election.

How do you feel about woke men, and do you think men need a female feminist to help them get there?
No, they don’t. Because that means women have yet another job in their day. Men should wake themselves up. They shouldn’t need a special woman sidekick to help them find the promise land. I think woke men are great, but sometimes they’re not really woke, they’re performing wokeness. What’s even worse is they want cookies, they want to be congratulated for being aware of their privilege and the benefit they have as they move through the world, and I’m not going to play that game with them. I don’t even think it’s idealistic. You shouldn’t have to educate your man about acting right, it's not our job. It’s not that they come to us perfect and fully formed—everyone is a project. But that women should be treated well and paid equally should not be part of that project.

Check out these books 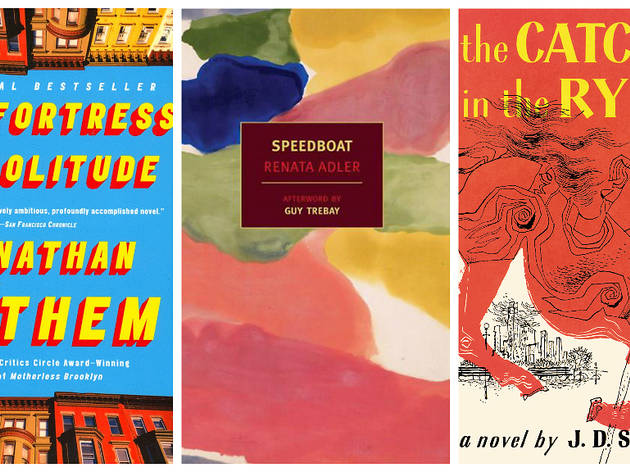 From classic Brooklyn bildungsroman to a modernist scramble through Manhattan, these books create NYC in their image