The American Museum of Natural History's newest exhibition has some serious teeth.

The immersive new exhibit takes visitors "underwater" to meet some of the ocean's diverse shark species, including the biggest predatory fish of all time—the megalodon.

"Sharks" at AMNH, which opens December 15, introduces the "toothy, fearsome predators" that have captured the public's imagination through films like Jaws and Deep Blue Sea and dives deep into the incredible diversity of this ancient group of fishes through dozens of life-size models (some as long as 33 feet) in an ocean-like gallery with wave-like lighting that moves across the floor.

Once visitors enter the gallery, a 27-foot-long megalodon, dubbed the "Tyrannosaurus rex of the seas," model greets them with its mouth wide open as if it is about to feed on them. Here, its giant teeth and overall size set the tone for the super cool and interactive exhibit.

The exhibit showcases more than 500 species of sharks through these hand-made models, including tiger sharks, great whites, the torpedo ray, the longnose chimaera and the tiny glowing dwarf lanternshark and displays them in a sort of "parade" from ancient sharks based on actual fossils visitors can see like the massive megalodon to more modern species. There's also a 37-foot-long screen that features sharks that swim in the earth's oceans today provided by Discovery's Shark Week. Seeing them up close helps viewers really understand the anatomy and behavior of sharks and their close relatives.

"This ancient and highly diverse group of animals is so much more than the popular depictions of them, and this exhibition uses amazing technology and techniques such as touch-free interactives and the museum’s world-renowned model-making to bring sharks up close and personal for visitors of all ages," says Ellen V. Futter, the president of AMNH.

The touch-free interactives Futter mentions are a habitat matching game and another interactive that invites visitors to become a shark by standing in front of a video mirror that transforms them into various species. There's also a game where museumgoers can "hunt like a hammerhead" by directing a shark through electroreception—a sixth sense that allows them to detect invisible electromagnetic fields.

Not only do guests get to meet these sharks but they also get to learn about how little a threat sharks are to people (most of the 10 or so annual deaths from shark bites are caused by just three species: the tiger, bull, and great white sharks) and how humans have actually caused a threat to sharks. Conservation and overfishing are discussed in the exhibit as well so as to spread awareness and teach all about efforts to protect them through conservation solutions such as shark sanctuaries in the island nation of Palau and sustainable sea food products.

"The perception of sharks—that they are large, vicious predators to be feared—couldn’t be farther from the truth," says John Sparks, curator in the Department of Ichthyology at the Museum and curator of Sharks. "Sharks and their relatives are an incredibly old, diverse group of organisms that are critical to maintaining the health of the ecosystems they inhabit. In fact, humans are much more of a threat to sharks than they are to us. We hope people walk away from this exciting exhibition with a new appreciation for sharks and understand they are magnificent creatures that should be revered, not feared."

Sharks at the American Museum of Natural History opens on December 15.

Want to see how these models are made? Check out the video below for a tour of AMNH's model-making room! 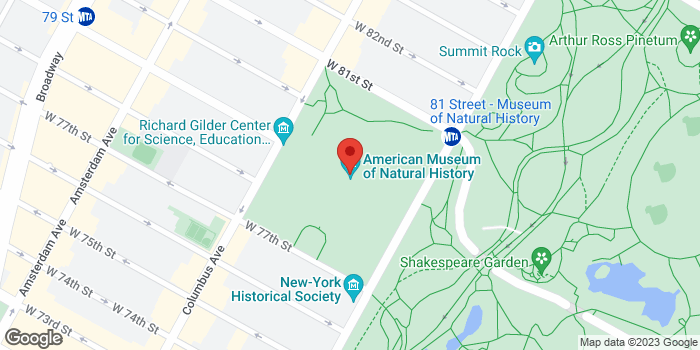 Price:
New York, New Jersey, and Connecticut residents (with ID) have the option to pay what they wish; otherwise, tickets start at $23 (adults), $18 (students/seniors), and $13 (children ages 3–12)