Why you feel rage in New York, and why that might not be so bad

New York City has a rep for being an angry place. And guess what—it is! (How does that make you feel?)

I first moved to New York City when I was 20, a Midwestern transplant here to work for a big, shiny magazine in a big, shiny skyscraper. I don’t remember every detail of that summer, but I do remember doing this: click-clacking down 14th Street in my bright-green heels with flowers on the toes, smiling at everyone who walked by and greeting the construction workers I passed with a cheerful “Good morning!” I remember telling strangers in my office building to “have a good one” as they exited the elevator. I asked baristas how their day was going, with genuine interest. I was basically Kimmy Schmidt.

Cut to 10 years later, when I muttered to a grandma—an actual grandma!—to fuck off for blocking the sidewalk. Then there was that time I lost my shit and kicked a display when an Apple store employee informed me that my Mac couldn’t be saved. This wasn’t me having a bad day. This was—is—a New Yorker on an average Wednesday. To tweak a line from Avenue Q, everyone here is a little bit rage-y.

How did this happen to me of all people, a sweet girl from a flyover state? I have some ideas: For one thing, there are a lot of folks here. New York City has the highest population density in the U.S., with more than 27,000 people per square mile, according to stats from the NYC Department of City Planning. (In Manhattan, that figure balloons to nearly 72,000.)

My wrath toward the elderly is a consequence of that. It fits neatly into what Leon James, a University of Hawaii psychology professor, calls pedestrian aggressiveness syndrome. “When we walk in a crowded area while in a hurry, we may experience the intense negative emotion of frustration each time there is an impediment or block to our destination,” he says, citing annoyances like walkers who suddenly stop or stroll shoulder to shoulder. (I raise his "may" to a “definitely fucking will.”) Add to that tourists, who walk 11 percent slower than locals, according to a study by the City of New York and the Department of City Planning. (And just think about how many more tourists New York City has than Des Moines. Feeling the fury rise?)

Researchers from MIT also point to line rage, a.k.a. the stress caused by having to wait for something. Welcome to your commute, where waiting is just a way of life: Weekday subway service experienced nearly 15,000 delays due to overcrowding last December , 113 percent more than the year before. And some days last year 7 million people rode the subway. That’s more than double the population of Chicago—all on our trains, in a single day.

Put it all together, and rage is an inherently New York quality. People see those around them freak out, so they, in turn, decide that’s a totally acceptable way to behave. The MTA claims courtesy is contagious. Well, MTA, rage is, too.

Academics at the University of Western Sydney feel people mimic how those around us act. (And here those people are losing it.) What’s more, New Yorkers are historically known—expected—to be angry and aggressive from time to time. Just think of some of the iconic NYC characters: Seinfeld's Elaine Benes (a funny rager), Taxi Driver's Travis Bickle (a scary one) and Network's Howard “I’m mad as hell” Beale (an emotionally unstable one). Could these characters exist anywhere but NYC? Absolutely not.

And here’s the thing: Everybody experiences rage: New Yorkers may just be better at expressing it. And that might not be such a bad thing. Bottling up frustrations, according to a recent report by the Harvard School of Public Health, is detrimental to emotional and even physical well-being. So feel free to go nuts; just don’t be a nut.

But how can New Yorkers quell their rage? I’m still waiting for a New York outpost of the Anger Room, a business in Dallas that puts people in a room full of household items with a blunt object and permission to smash everything in sight. Until then I’ll cope by trying anger-relieving activities. Trust me: They feel a lot better than cursing out a slow-moving grandma. 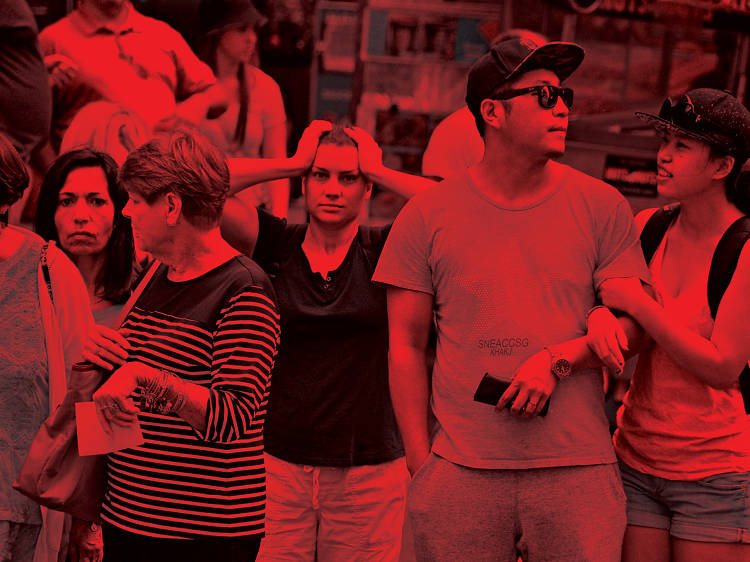 Which angry New Yorker are you?

With all of the amazing things our city has to offer, there's got to be some things that make us see red. Think you're brimming with anger? Or more Zen? Take our quiz to find out which angry New Yorker you are.