A myriad of Chinese clan houses dot George Town and most are around 200 years old. The ornate carvings of flowers or animals depicting luck and prosperity add to the grandeur of these old building as they’re surreptitiously caught on camera by Mark Walker

Kongsi is the official name given to the clan houses or meeting halls for overseas Chinese with the same family name. Many Chinese came to Penang in the early 19th century and they were predominately single men, without any other immediate family in Malaya. They would often worked and lived on small vessels moored around what is now Swettenham Pier which is near the current ferry terminal in George Town. Later, they built houses on stilts over the water that became known as the Clan Jetties. Eventually each jetty became associated with a particular clan but today only six jetties survive. Those of the same extended family or clan began setting up kongsi in various parts of Penang. 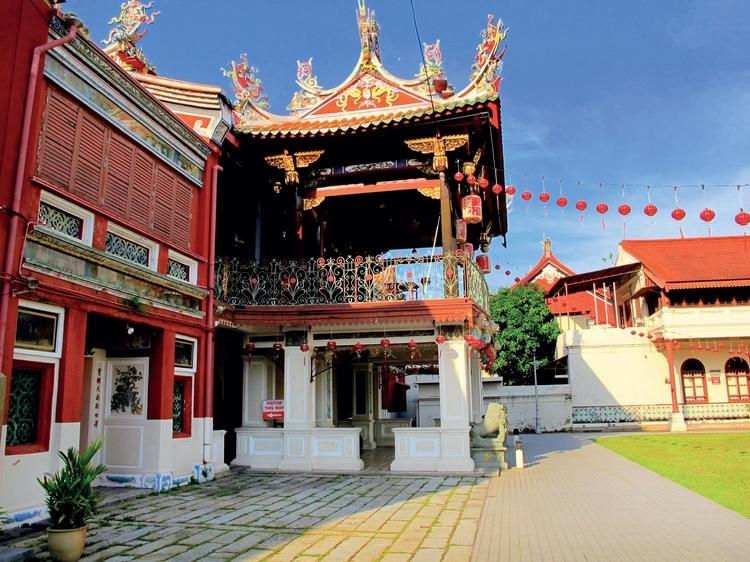 The Cheah kongsi or Sek Tong Cheah Si Seh Tek Tong Hock Haw Kong Kongsi was formed in 1810 by members of the Cheah clan from Sek Tong Village in the Fujian province of Southeast China. The main temple was completed around 1870 with architectural influences from Peranakan, Malay, British and Chinese. Although its premises face Beach Street, the main entrance is down a narrow passageway on Lebuh Armenian. The Cheah clan is one of the five largest Hokkien clans in Penang. The place is open Monday to Saturday from 8am to 6pm and admission is free.
Read more 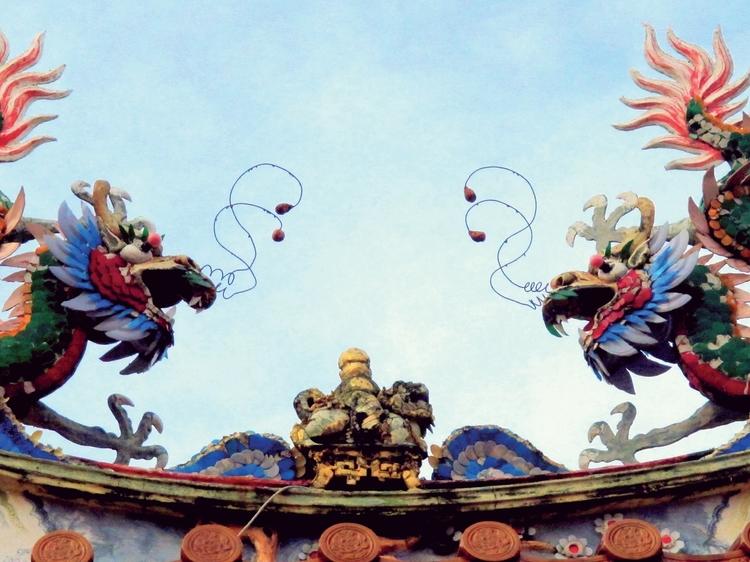 Dragons play a major part in Chinese kongsi design since they symbolise success, luck, power and prosperity. The one in the photograph is a wonderful example atop the Cheah Kongsi and is best viewed when walking out of the narrow entrance way back onto Lebuh Armenian. The mosaic work on the dragons are mostly green, blue and red, and it’s not only time consuming to produce but a dying craft that only a few artisans today have the required skills to restore these buildings.
Read more
Advertising 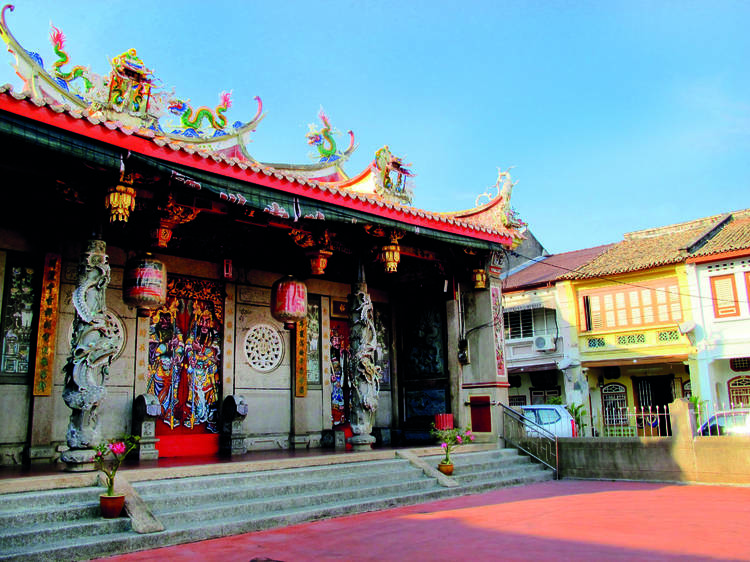 This is the oldest clan house in Penang dating back to 1810. Hidden from the busy road of Lebuh Pantai, it’s housed in its own enclave complete with shop houses within its premises. Commonly known as the Tan kongsi, it was founded by members of the Tan clan from the Fujian province of Southeast China who arrived in Penang in early 1800s and worked mainly as port workers at the harbour. They are also one of the five largest clans that make up the Hokkien speaking population of Penang.
Read more 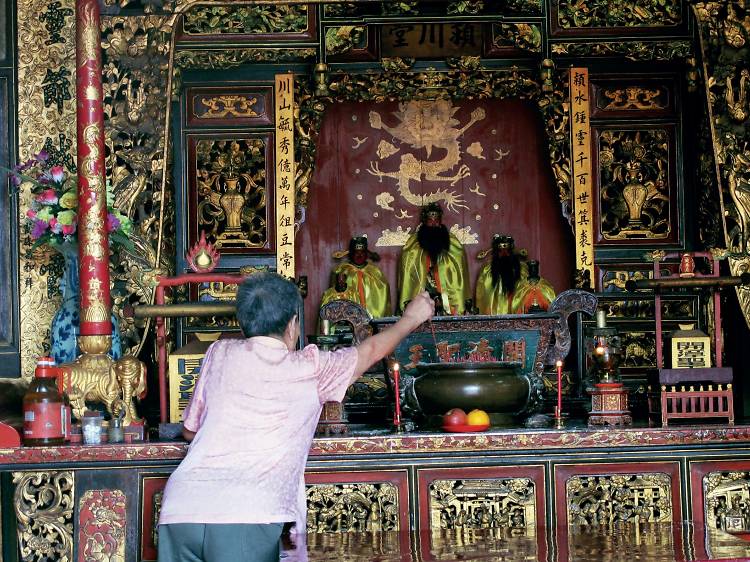 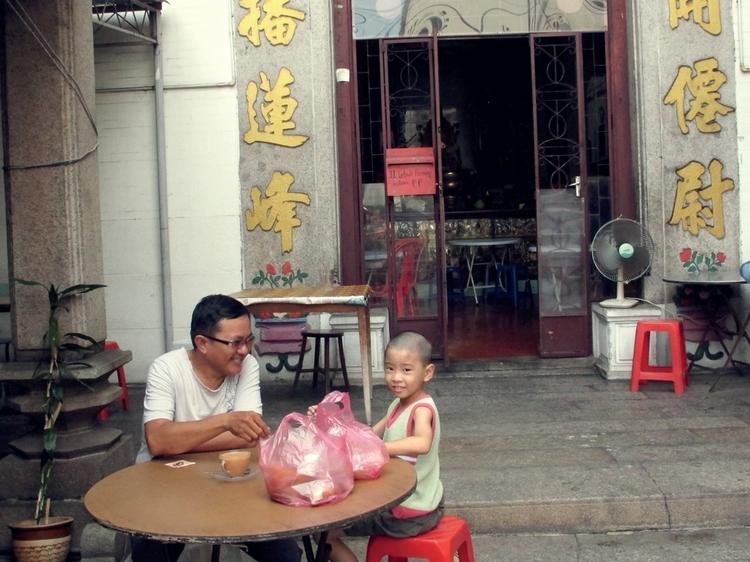 The father and son are enjoying good home cooked vegetarian food prepared in the Moey She temple courtyard. Often the clan association members play a big part in providing welfare and also educational support. This small Cantonese temple is unusual as it is located right within the heart of Little India in Lebuh Penang and hidden between cafes and shops, amid robust energy. It was built in 1905 for the Moey family clan with inscriptions inlaid into granite panels at each side of the door way and an ancestral hall within the temple complete with wooden alters. 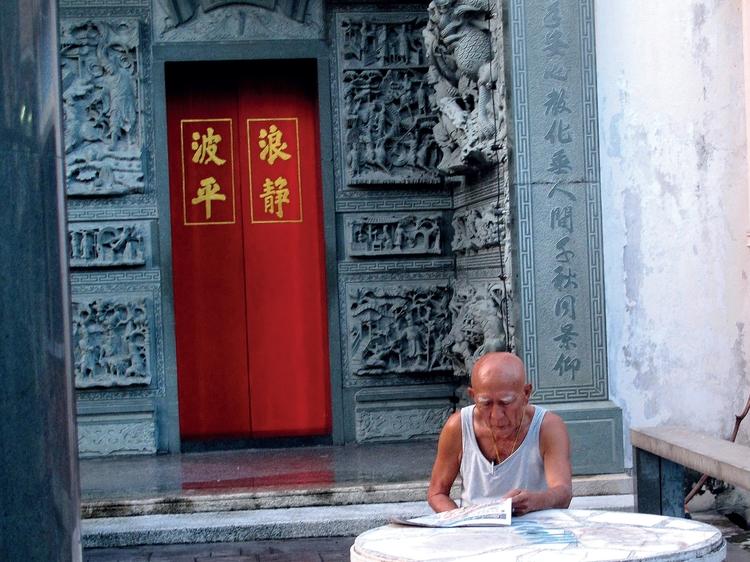 Probably of Hainan descent, this elderly man enjoys his morning paper while waiting for temple to officially open for the day. The clan associations still play an active part in the lives of the local people, especially the older generation, who meet every day to worship, clean and generally look after the temple facilities. The intricate ceramic work depicting swirling dragons – restored to its former glory in 1995 – on the roof of the temple is beautiful when captured on a clear bright day. Located on Lebuh Muntri, its building began in 1866 and was competed almost 30 years later. The temple is dedicated to Mar Chor who is the patron saint of seafarers. The Hainanese, from Hainan province in China, are famous for their seafaring and culinary skills. 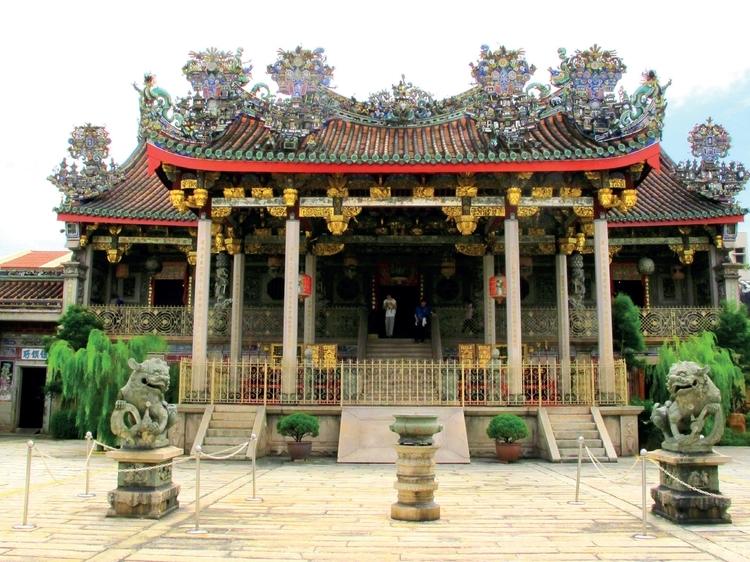 This is, perhaps, the most well-known kongsi in Penang. This spectacular temple has an entrance on Lebuh Cannon with two green stone lions – the male on the right and female with a cub on the left – guarding it. There’s a gold and black plaque to honour the two patron saints of the Khoo clan. The story goes that Tua Sai Yah the great Duke and Ong Soon Yah the great Noble were generals in the army during the 4th century Jin Dynasty and they defeated a much larger opposing army using their own unique tactics of trapping them in the trees and grasses near the River Fei. Due to this cunning tactic that saved the dynasty, they were later deified. 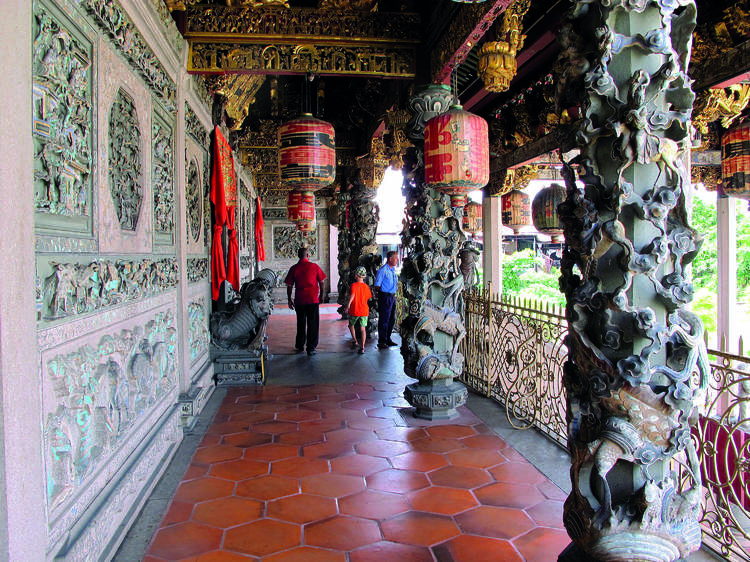 There are four beautiful intricately carved octagonal columns in the kongsi. Each column is from a single piece of green stone. The dragon’s body is coiling downward showing great strength as the head is pointing upwards to the sky. The windows of the main hall are in three shapes – round, octagonal and square and each is important in its meaning. The Khoo kongsi is open daily from 9am to 5pm including public holidays and Sundays and there is an admission fee.
Advertising 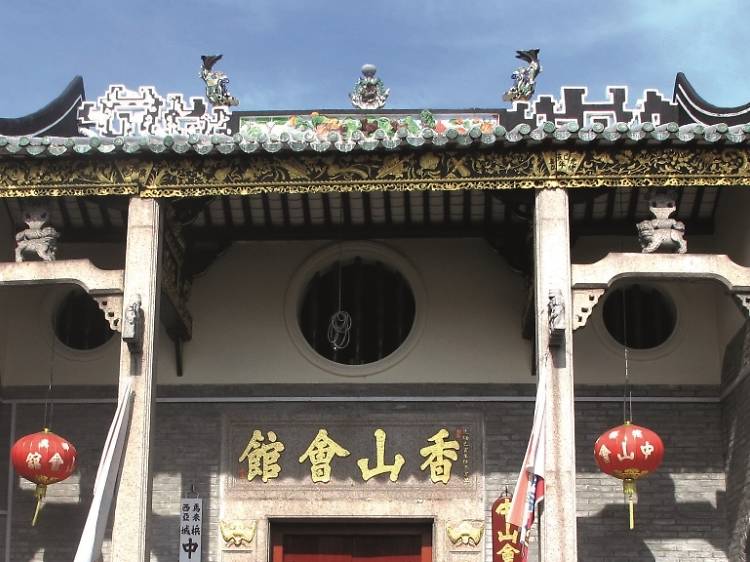 This Cantonese clan association house was magnificently restored in 2012. The clansmen originally came to Penang from the Heong San district of Southern China. It is located at the junction of Lebuh Gereja and Lebuh King, forming part of a row of Cantonese temple buildings. The original name plaque is above the front entrance door while the new name Chong San Wooi Koon inscribed on panels at each side of the door with striking door paintings of the Warrior Gods. The name was changed in the early 1900’s to celebrate the life and work of Dr Sun Yet Sen. 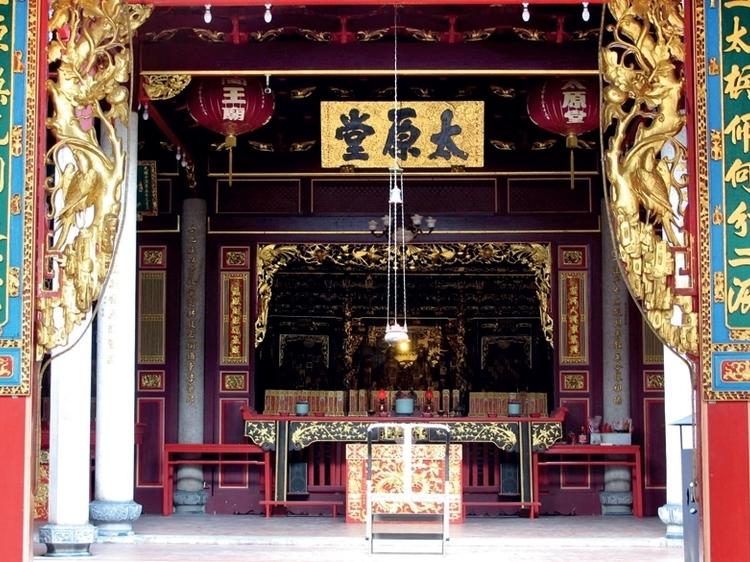 You could easily miss or pass by the Ong Temple in Lebuh Penang. It’s set back from the main road opposite the entrance to KOMTAR and right next to the bus stop. Now that you’ve been introduced to it, so stop and look in at the interior of this fine building. The ancestral tablets can be clearly seen. Notice the clan plaque in gold with fine black calligraphy, the stunning red, blue and green giving the feeling of prosperity and a real place of worship. There are two guardian lions protecting the main entrance which opens in the day to the public.
Advertising 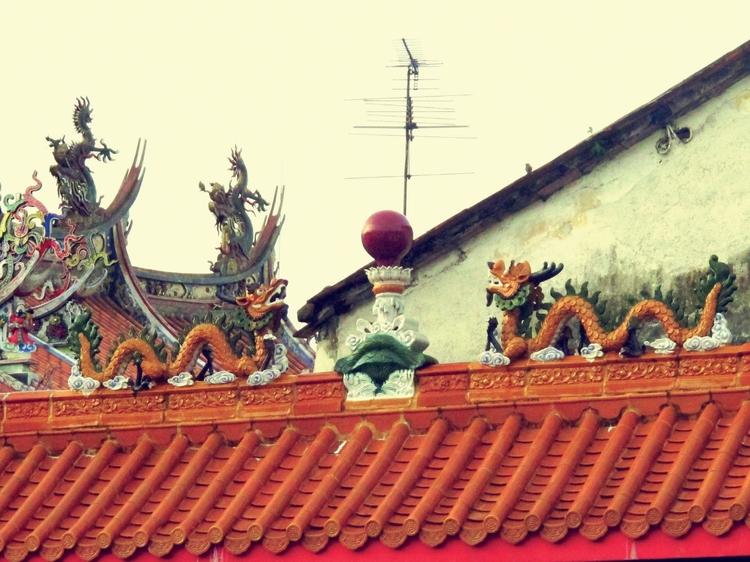 The full name of this clan house is Kew Leong Tong that means ‘Hall of the Nine Dragons’ – paying homage to an ancestor of the Lim family whose nine sons became chief magistrates during the time of the Tan Dynasty. Lim is one of the top five clans in Penang and the temple dates from the 1860’s and is on Lebuh Ah Quee. The temple is only open to the public by prior arrangement.
Read more 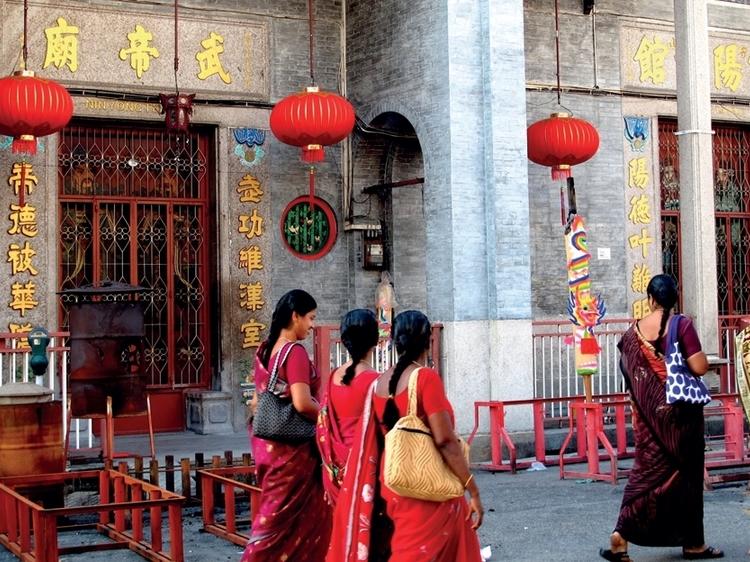 Penang is a real melting pot of faiths. The King Street temples are used by both the Hakka and Cantonese communities and they date back to the mid 1800s. Although people now associate King Street as being part of Penang’s Little India, the stretch from Lebuh Bishop to Lebuh China was the centre of the Cantonese community. This photo reflects this melding of two cultures. One of the temples, the Tua Pek Kong Temple was completed early and has carved stonework and windows of birds, flowers and animals which symbolise good fortune , prosperity , safety and family blessing.
Show more