Sure you could stay at the Hyatt or the Hilton, but some of the best hotels in San Fran are boutique or historic locations. Whether you're visiting, hosting family or booking a staycation, there's something suitable in every neighborhood and price range. Book something downtown to be near the best attractions, or the North Beach neighborhood to be near touristy Fisherman's Wharf. Either way, try to check off the best things to do in the city from a comfy base at one of the best hotels in San Francisco. 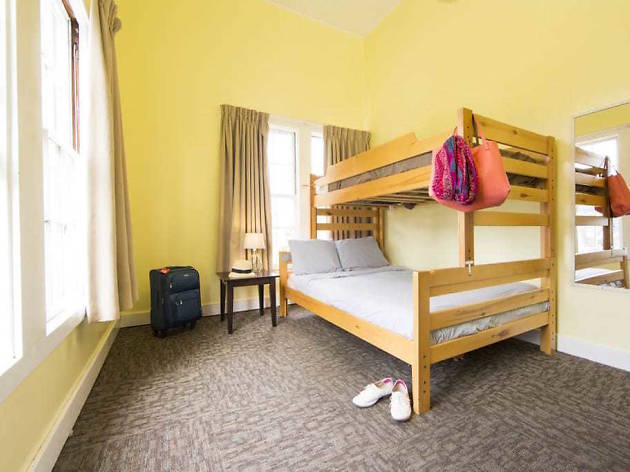 Overlooking one of San Francisco’s most beautiful landscapes is the city’s best hotel bargain – so long as you aren’t squeamish about sharing a bathroom. Nestled in one of the Presidio’s historic army barracks, this Hostelling International location feels secluded even though it’s within walking distance of the bustle and excitement of Fisherman’s Wharf to the east and iconic Crissy Field and the Golden Gate Bridge to the west. Whether you’d prefer a private room (without bath) or dorm (options range from four to 24 beds, co-ed or single-sex), you’ll have access to the hostel’s impressive amenities including a cozy, fireplace-warmed common area, 25-seat movie lounge, large kitchen, laundry facilities and outdoor patio. Breakfast at the on-site Cafe Franco is included. 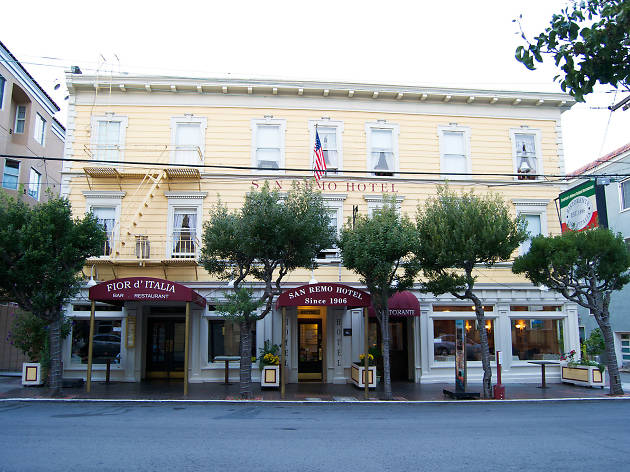 Formerly a home for those working on the docks, this quaint colonial-style structure is now a higgledy-piggledy hotel full of charm. There are 64 rooms of varying size and style – although most of them have chintzy floral wallpaper and bedspreads – with Oriental rugs and Victorian-inspired furniture scattered throughout. While some rooms have sinks, the bathrooms are shared – unless you splash out on the penthouse, a self-contained bungalow in the roof that has an en suite and a great view of North Beach. It's worth noting also that there is no elevator and no televisions. 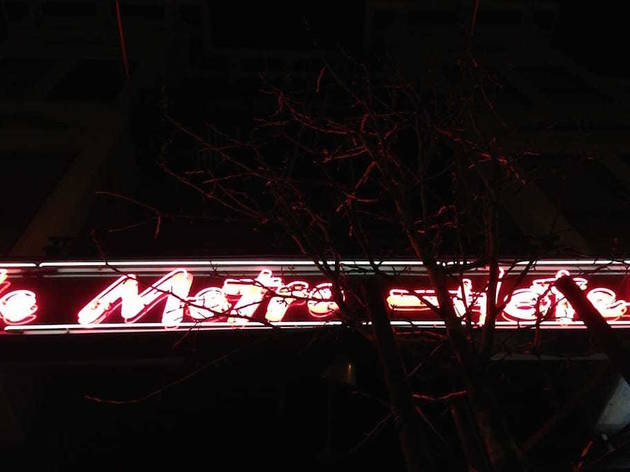 Centrally located near Alamo Square, Haight-Ashbury and the Panhandle, The Metro is one of the city’s best deals for those in need of a private bathroom. The eco-friendly hotel is clean but fairly no-frills – just 24 small, simple rooms with free wifi. You can’t beat the location, though, in a hip-but-friendly neighborhood with excellent restaurants, bars and several nearby must-see landmarks (like the famed Painted Ladies, a row of Victorian houses). 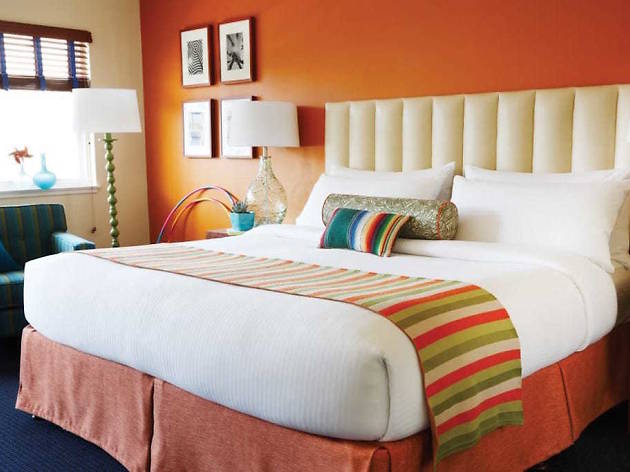 Saturated with color, this Joie de Vivre property is right at home in San Francisco’s beachy Marina District. One of only a handful of hotels in the city with a pool, Hotel del Sol’s bright and playful rooms are kid- and pet-friendly and feature modern technology, including free high speed wifi. Paid parking is available on-site. 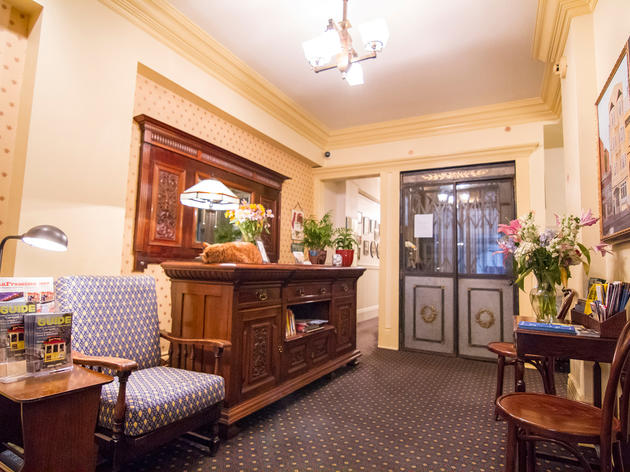 A lovely, pet-friendly hotel in a visually unique, towering Edwardian building. Inside is just as charming as the exterior, with the odd floral touch – but not too much. There's an ancient, birdcage elevator to get you from floor to floor, free wifi throughout and complementary breakfast and afternoon tea with cookies. Union Square and the Theatre District are a few minutes' walk away, just remember to say hi and bye to The Golden Gate's resident cat Pip. 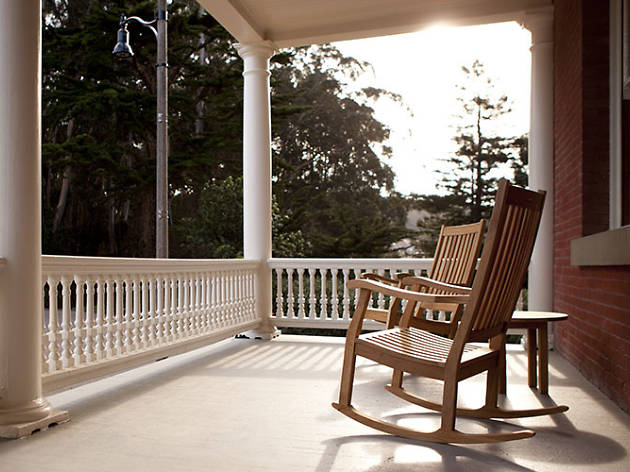 A National Historic Landmark, the Inn at the Presidio is nestled within its namesake park at the north end of the city—close enough to the action, but with comfortable distance between SF’s bustle. Its many amenities include a stunning golf course, countless scenic walking and hiking trails, and a cozy outside fire pit with Golden Gate views. The 22-room hotel also boasts a charm distinct from its competitors: the red brick facade and white columned porch offer cozy spot to people watch as the evening winds down. 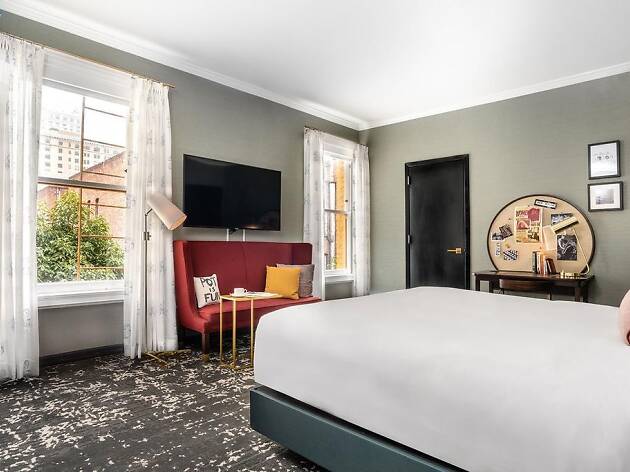 Inspired by the Beat Generation of the mid-20th century, this boutique hotel expresses itself through dark and brooding public spaces, words printed on the walls and floors, a few mid-mod touches and typewriters. Situated in the heart of Union Square, guests can take in great theater, shopping, eating and drinking. Then cap off the night in the hotel's Obscenity Bar & Lounge, where there is regular live jazz and slam poetry. 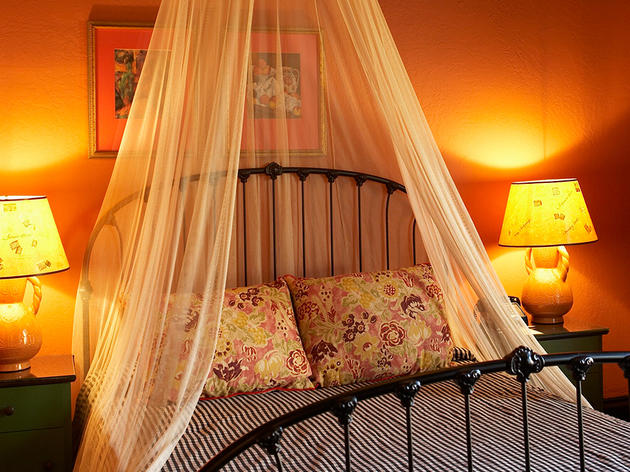 This 120-year old hotel, extensively renovated in 1995, is a tribute to late-1950s North Beach when the neighborhood was a hotbed of Beat Culture. Allen Ginsberg even called room 204 of the Boheme home in his final years. Ginsberg may be gone but he and his fellow Beats live on in the photos, poetry and sheet music that adorn the hotel’s rooms and hallways. In true North Beach fashion, most rooms are small but smartly styled in vintage color schemes and wrought iron. You can’t beat the location among the neighborhood’s plentiful sidewalk cafes but leave the car at home; parking in North Beach is a nightmare. 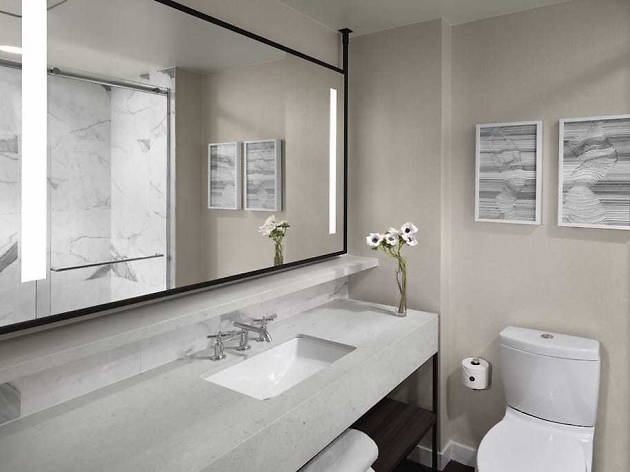 The Axiom Hotel offers modern style at a great price. Located steps from Market Street, San Francisco’s main downtown thoroughfare, minimalist rooms are outfitted with fiber-optic wifi, smart TVs and complimentary iPads and iPod docking stations. The hotel’s airy lobby is complete with a marble-topped bar at the Turn Cafe and a cozy library stocked with plush chairs and leather couches. This hip, inviting hotel also has a well-stocked gym and a game room with arcade games and a foosball table. 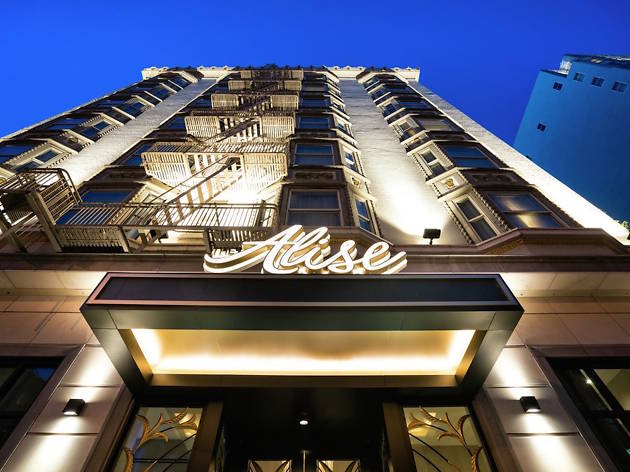 The Alise combines sumptuous drama with an eco-friendly ethic. Draped in gold tones and plush fabrics, the dramatic lobby and its Pineapple Bistro manage to be posh without feeling overdone. Their 93 rooms are simple but elegant and the Alise takes extra care to assure all linens, including duvets, are always clean and extra soft; they even provide fluffy robes and slippers, the latter of which they encourage you to take home. Downstairs, the hotel offers free custom yellow bikes for exploring the city from this Lower Nob Hill hub. 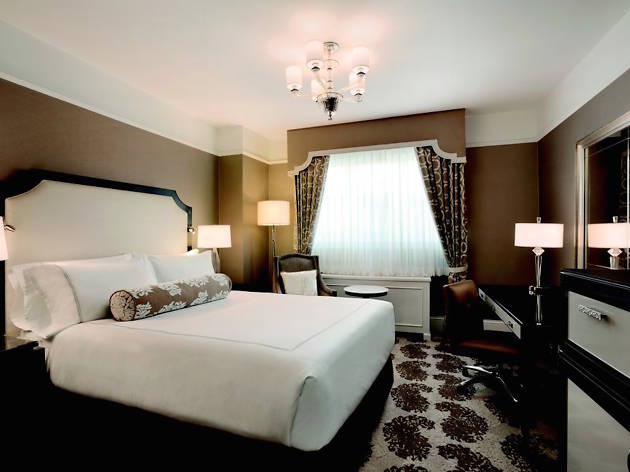 Everything about this classy hotel screams San Francisco, from the Julia Morgan-designed building and gorgeous bay views to the state-of-the-art wellness spa and the iconic tiki bar in the basement. Thanks to a refurb in 2014, each of the Fairmont's rooms were decorated in calming, earthy tones, dark wood and marble. If you're willing to splash out – an we mean really blow some bucks – the 1920s-themed Presidential Suite is the stuff of San Francisco legend. Covering the entire eighth floor, it has a two-story library, billiards room, 24/7 butler service and it's own chef, plus a secret door in a bookcase that leads to a rooftop helipad. 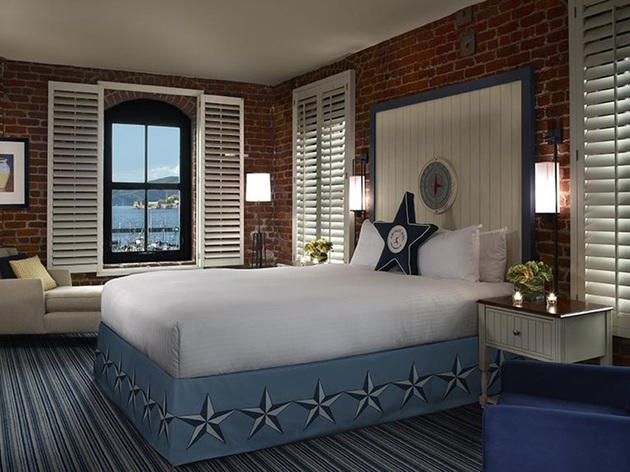 This nautical-themed hotel has been a mainstay of San Francisco’s best hotel list for years. Constructed of red brick and Douglas Fir back in 1907, this Fisherman’s Wharf behemoth pays homage to San Francisco’s Barbary Coast days with ship paraphernalia and sea mythology galore. Despite the anchor prints and porthole-shaped mirrors, though, the Argonaut manages to stay classy with dark fabrics and careful attention to detail (like a yoga mat in every room) that keeps guests coming back year after year. With fantastic views of the San Francisco National Maritime Park, Alcatraz and the Golden Gate Bridge this is a great luxury hotel for the whole family, including the pets. 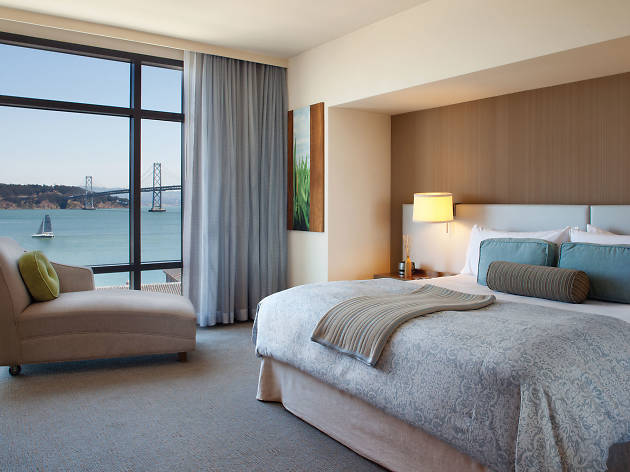 Magnificent views of the San Francisco Bay dominate this chic boutique hotel on the water’s edge on The Embarcadero. With an aesthetic that is part mid-century modern, part urban cool, the blues and greys of Hotel Vitale’s luxurious rooms bring indoors the fog-drenched city outside. Rooms facing an interior courtyard are the least expensive but a night in a bay-view room is money well-spent. For a real treat book a “circular suite” where walls of windows offer you a full panorama. On the roof, the Spa Vitale offers facials, massages and aromatherapy soaking tubs. Downstairs, join the Financial District’s 20-somethings for a post-work cocktail at the Americano restaurant and bar. 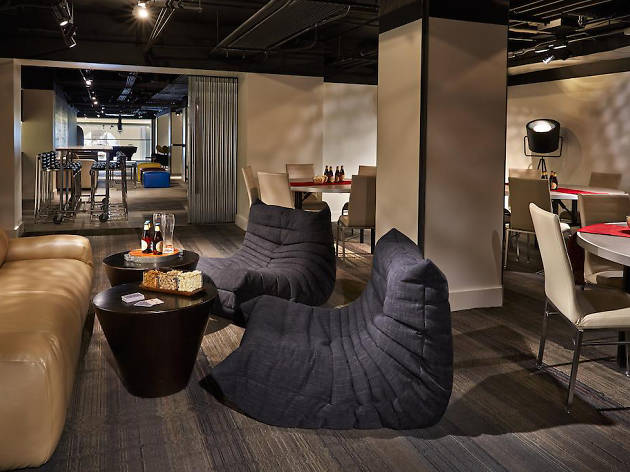 When in Silicon Valley, do as the techies do. Hotel Zetta, smack in the heart of SoMa, features a massive Plinko board as well as several game rooms to get your play on. But Zetta has plenty of style too, with a salvage-and-rescue aesthetic that showcases artwork and design features made from recycled materials. Stuff yourself silly at adjacent Cavalier restaurant, then pass out in one of the spacious, sleek rooms. 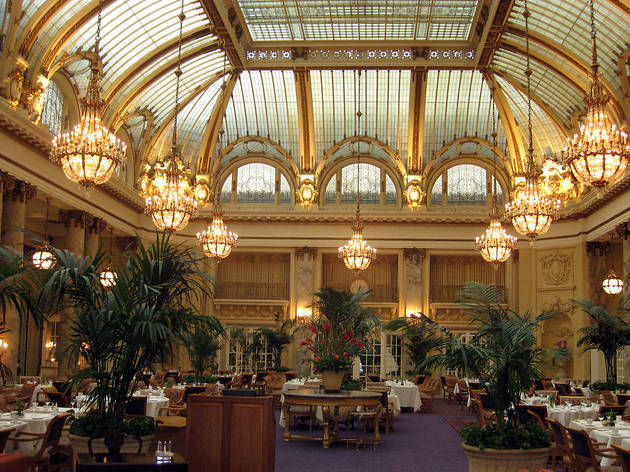 In the early 20th century, The Palace was the place for wealthy and powerful visitors to see and be seen. American presidents frequented the hotel and one, Warren G. Harding, never left – he died of a heart attack in his upstairs room in 1923. Today, it’s no longer on the cutting-edge, The Palace’s tasteful but simple guest rooms make a nice counterpoint to its lavish lobby and dining room. With Austrian crystal chandeliers (each weighing 750 pounds), Ionic columns of Italian marble and a domed glass ceiling, the 8,000-square-foot Garden Court remains one of the most magnificent dining rooms in the state. Under a second domed glass ceiling, beneath silhouettes of the city skyline, is one of San Francisco’s only indoor pools. And that mural behind the bar at the Pied Piper? An original Maxfield Parrish. 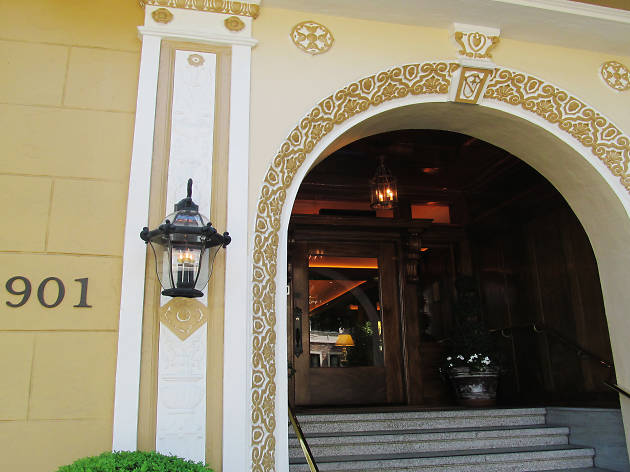 This posh Pacific Heights boutique hotel is decorated throughout with modern stately home glamor and is eminently inviting. Situated at the top of a hill, Hotel Drisco's imposing Edwardian structure offers uninterrupted city views, plus luxury amenities like nightly wine receptions and weekday chauffeur service. In fact, the complimentary evening wine reception is not to be missed. There are local California wines, artisanal cheeses and charcuterie, fresh fruit and hot hors d’oeuvres. 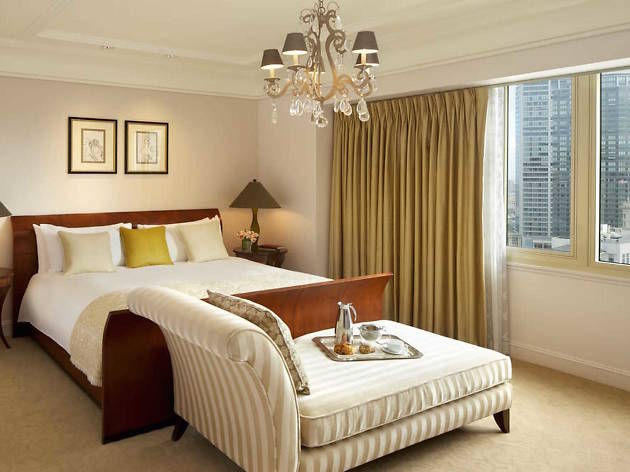 The Michelin-starred restaurant is the biggest draw at this recently renovated luxury hotel in Union Square, just steps away from some of the best shopping and eating in San Francisco. Guests will be pleased to know that room service comes directly from aforementioned Michelin-starred eatery, so you can enjoy their culinary delights from the comfort of silky-soft Frette linens in bed. There are 110 rooms in all, but the least expensive rooms at the hotel are very small. If you can afford to upgrade, you won't regret it. 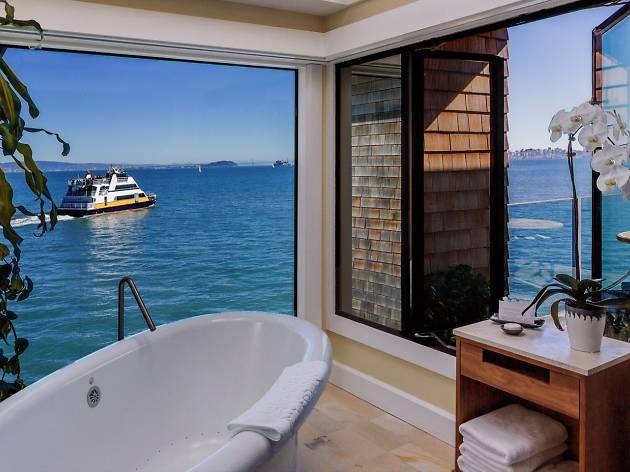 Across the Golden Gate Bridge in a magical land called Sausalito, the Inn Above Tide is waiting to take in exhausted San Francisco visitors with open arms. Private balconies adorn each and every room. Take in the sunset, complete with frolicking sea lions and soaring gulls, each evening with a selection of complimentary wine and cheese. Make the experience even more special by upgrading to a suite complete with fireplace, cushy sofas and standing tubs behind floor-to-ceiling windows.