Where to see live music and concerts in San Francisco

Catch a touring star or a homegrown hero with our guide to the best venues for live music and concerts in San Francisco, from major music halls to intimate clubs

Music has driven the city’s cultural needle for decades, from the Summer of Love to the latest slate of concerts in San Francisco—each year, tens of thousands cram Golden Gate Park for annual events like the Hardly Strictly Bluegrass and Outside Lands music festivals. Our fair square of 7x7 miles has a particularly dense concentration of diverse music venues, so whether you take in the history and acoustics of a classic theater such as the Warfield, which opened in 1922, or the stripped-down intimacy of former church the Chapel, established almost 100 years later, you’ll experience a firm sense of place that matches the music. In the middle of the 20th century, the Fillmore District was synonymous with jazz, but now that the SFJAZZ Center has moved the groove to Hayes Valley, hopes of reviving the “Harlem of the west” have dwindled. It’s also worth checking the online calendars of clubs such as Mezzanine for live gigs.

The best places to see gigs and concerts in San Francisco 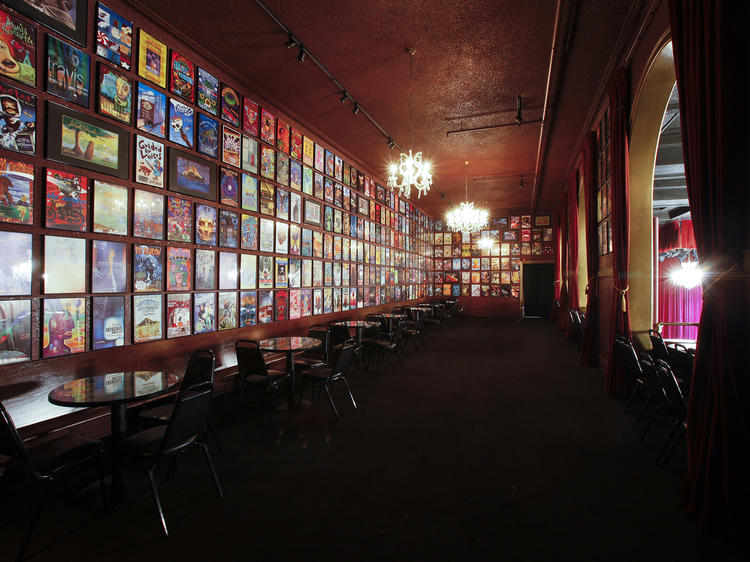 The 1,200-capacity Fillmore was built in 1912, but is better known as the stage from which Bill Graham launched his rock-promotion empire and the 1960s "San Francisco Sound" with bands such as the Grateful Dead, Jefferson Airplane, Santana, Quicksilver Messenger Service and Big Brother and the Holding Company. The venue later changed hands several times and became a private neighborhood club and a punk spot in the '70s and '80s before reopening in the '90s and establishing itself as the powerhouse it is today. The performers who play here tend to be on the verge of megastardom or already at its apex and reaching back for the intimacy that only this legendary room can provide. 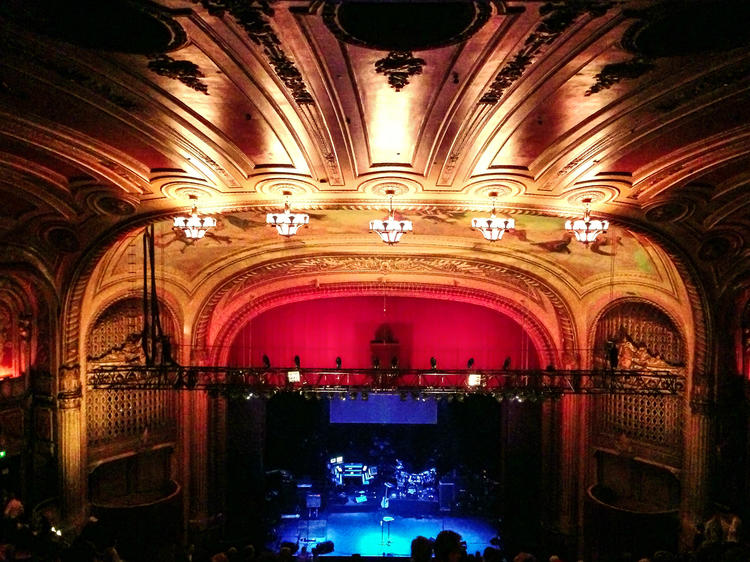 Opened in 1922 as a vaudeville theater, the Warfield has operated in its current incarnation since the 1980s. The ornate room, which has a 1,800-seat balcony and an overall capacity for 2,300, retains its original splendor, though the venue now showcases a variety of musical genres. From titans of rock revisiting classic releases to the new wave of rap artists touching the stage for the first time, bookings are diverse but tend to stick to popular movements. Even the back balcony seats have good views of the stage in the well-designed space. Those lucky enough to get backstage may also get a glimpse of a portion of the underground speakeasy once operated by Al Capone, who had an office in the building. 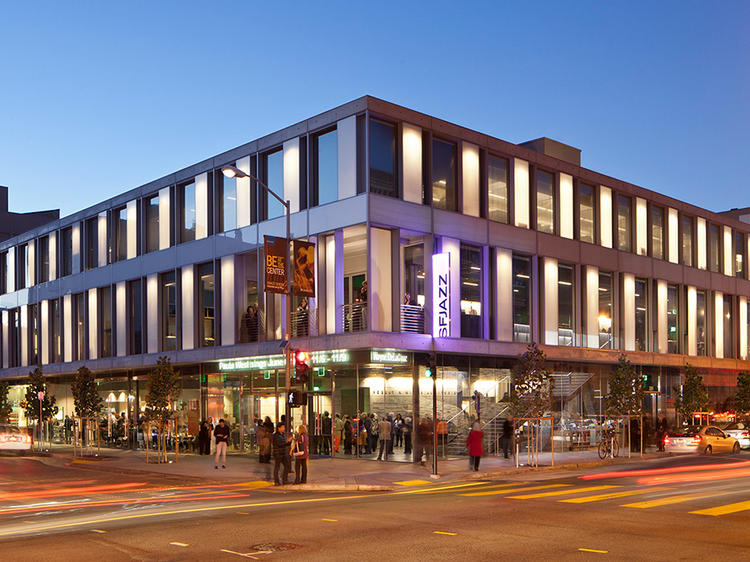 San Francisco finally got the jazz hub it deserves with the 2013 opening of this $64 million center, the first standalone venue in America built with the musical genre in mind. The SFJAZZ Center comes complete with state-of-the-art sound designed by Meyer Sound Laboratories and a rustic Mexican restaurant from acclaimed chef/restaurateur Charles Phan. Now SFJAZZ has an appropriately majestic headquarters for the annual music festival it has produced since 1983 as well as a home for world-class performances not only in the jazz realm, but also for global music in its many forms. 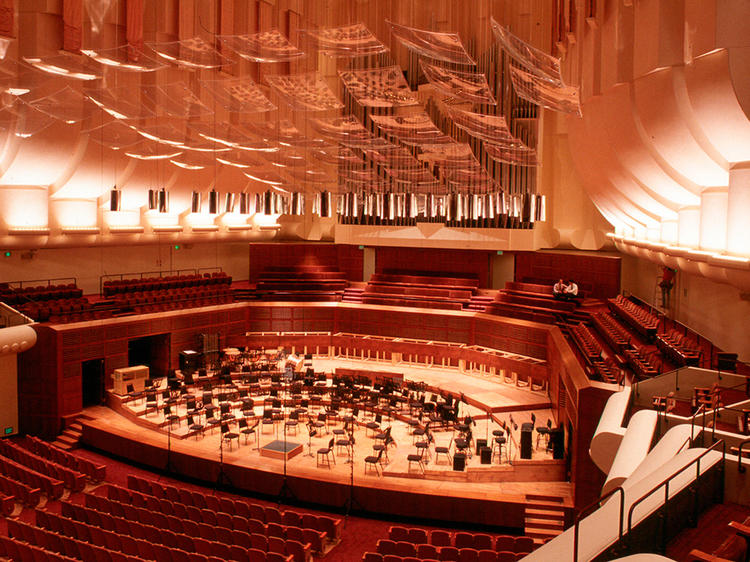 Formed to boost public morale shortly after the 1906 earthquake and fire, the San Francisco Symphony performed its first concert in 1911. Today, under the dynamic direction of Michael Tilson Thomas, the orchestra is internationally recognized for its innovative work, winning several Grammy awards in the process. Davies Hall is a fitting venue for this lauded orchestra—a striking, multi-tiered, curved-glass edifice with flawless acoustics and clear sightlines. There isn't a bad seat in the house, and that includes the 40 in the center terrace section behind the orchestra that start at a mere $15 for most performances.

For a list of events and how to purchase them at the Davies Symphony Hall, click here. 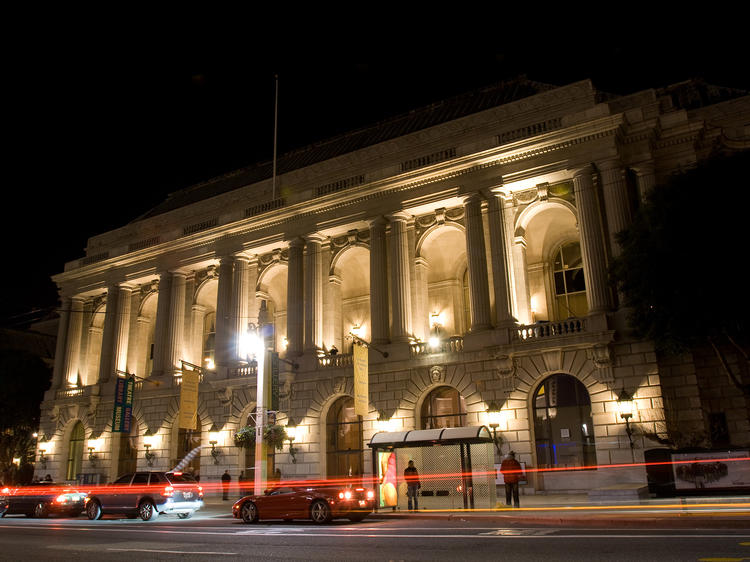 The SF Opera, inaugurated in 1923, is based in the War Memorial Opera House, a grand Beaux Arts building designed by City Hall architect Arthur Brown Jr. and built in 1932 as a memorial to the soldiers who fought in World War I. The 3,176-seat auditorium and cultural landmark is modeled on European opera houses, with a vaulted ceiling, a huge art deco metal chandelier and a marble foyer. An $84-million revamp in 1997 not only restored the elegant building (workers found clouds painted on the ceiling when they scraped away the grime), but installed up-to-date electronics and stage gear. The fall season runs early September to December; the summer season from May to July. In addition to opera, the venue provides a stage for the San Francisco Ballet, various concerts, lectures and special presentations.

For a list of events and how to purchase them at the War Memorial Opera House, click here. 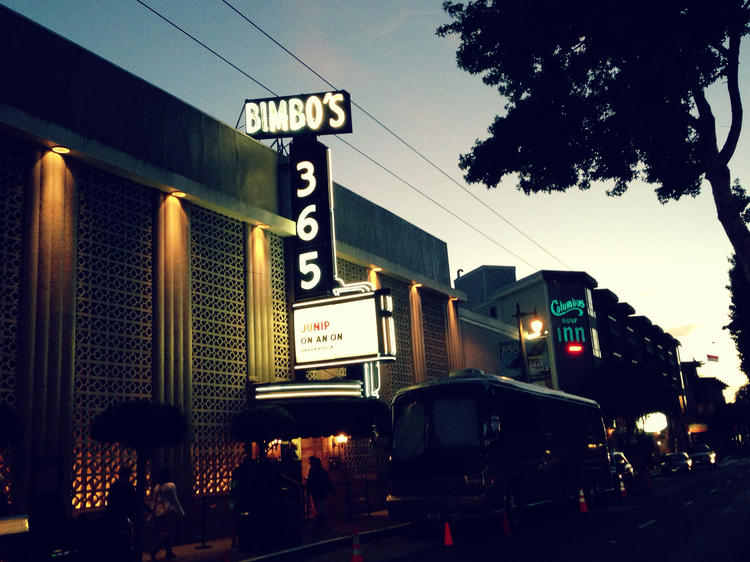 Bimbo's began life as a Market Street speakeasy in 1931, moving to North Beach two decades later. The venue is still owned by the descendants of Agostino “Bimbo” Giuntoli, one of its original proprietors, and has been nicely preserved, with a mermaid theme running throughout. It's one of the most elegant places to see a show without an orchestra or opera singers present. Rita Hayworth once appeared here as a dancer, but these days you're more likely to see edgy acts like Zola Jesus, international pop heroes like the Raveonettes and tribute bands such as Tainted Love or Super Diamond working up the crowd. 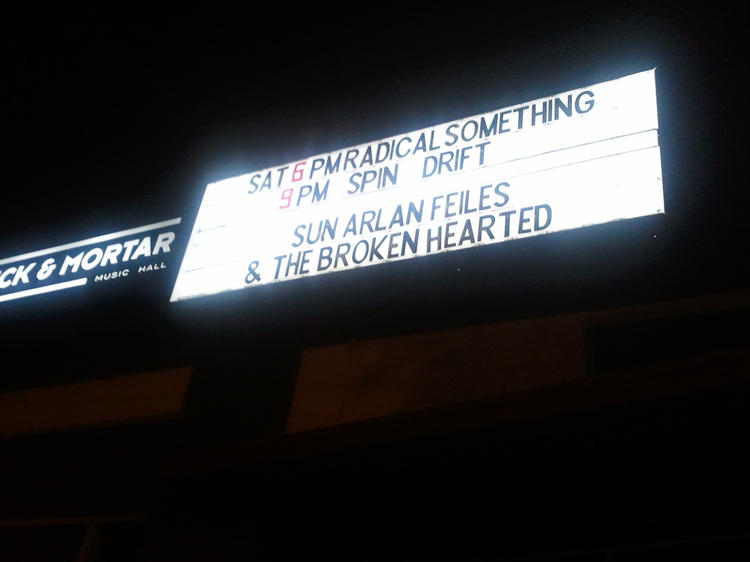 The 250-capacity venue, which opened in 2011 in the former Coda jazz club space, has quickly become one of the city's most vital venues for an eclectic array of live music. The Brick and Mortar is an intimate yet lively spot where you can take in a New Orleans–style brass band, an emerging indie rock act or a Bay Area–style street rapper, depending on the night. During the day, the place hosts excellent Vietnamese pop-up Rice Paper Scissors for weekday lunch and weekend brunch. Cash only. 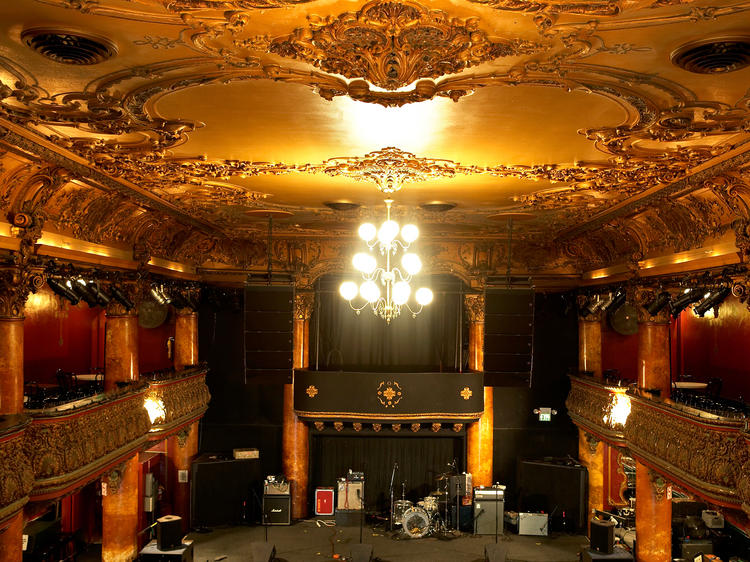 Originally a bordello and gambling establishment called Blanco’s when it opened in 1907 through the Great Depression, then a highfalutin nightclub called the Music Box operated by notorious fan dancer Sally Rand, the grande dame of the city’s live venues is as beautiful today as at any point in its century-long history. The lavish room, done out with enormous mirrors, rococo woodwork and gold-leaf trim, became the Great American in 1972 and has seen performances by the likes of Sarah Vaughn, Count Basie, Van Morrison, the Grateful Dead and Arcade Fire. These days, it’s run by the owners of Slim’s, who present a cutting-edge roster of well-regarded local and touring musicians (many of the indie-rock ilk). Try to snag one of the coveted seats on the upper balcony.

For a list of events and how to purchase them at The Great American Music Hall, click here. 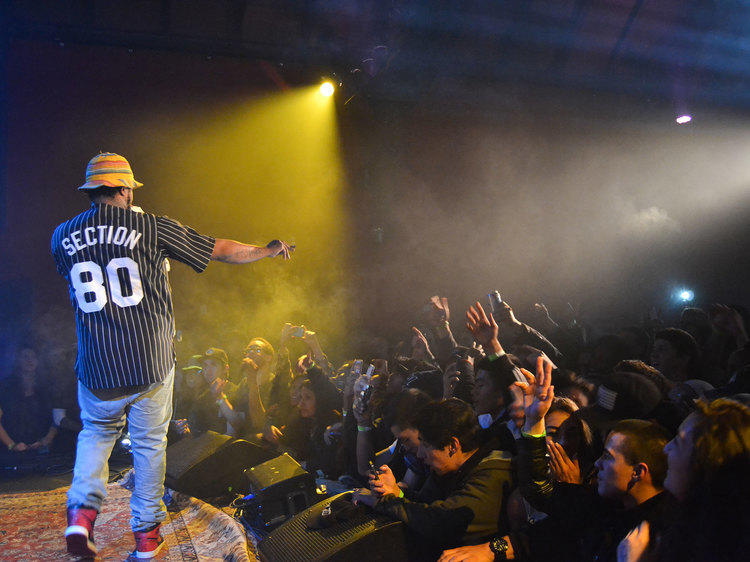 The owners of New Orleans' legendary venue Preservation Hall opened this West Coast counterpart in 2012 and send its Preservation Hall Jazz Band to perform several times a year amidst a diverse lineup. An open-minded booking policy means you might catch indie or garage rock just as swiftly as something from down South. The venue also houses Vestry, a restaurant focused on French, Italian and Mediterranean food that's open six nights a week for dinner, plus weekend brunch, and the Chapel Bar, a neighborhood watering hole worth hitting whether or not you're attending a show (it's open seven nights a week regardless of what's on the calendar). 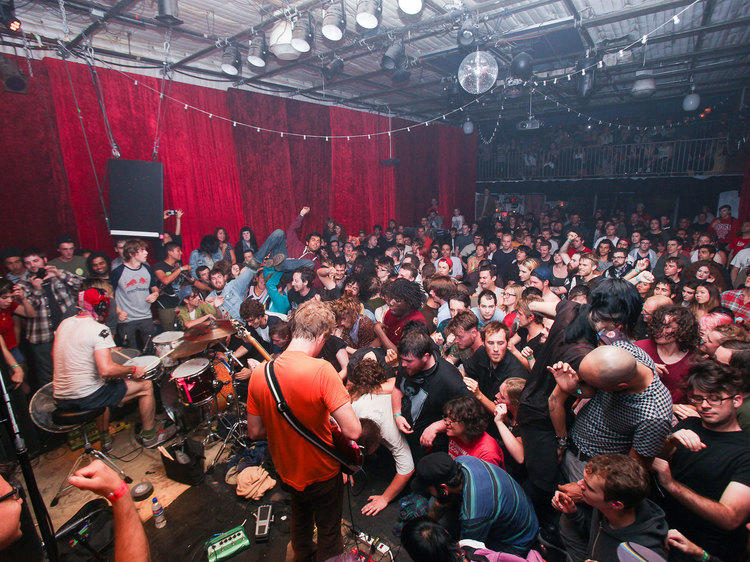 Since 2004, the Rickshaw has brought life and fun to an otherwise desolate strip near Civic Center—it's a place to discover new music and movements along the indie/dance spectrum and beyond. A crash-pad decor of mod plastic loungers, foosball table and novelty lighting gives it a collegiate/rec room vibe, but the venue serves as a gathering point for different generations. It's now home to the long-running 18-and-over dance party Popscene and retro party Club 1994, in addition to several all-ages shows and regular 21-plus events. Cash only. 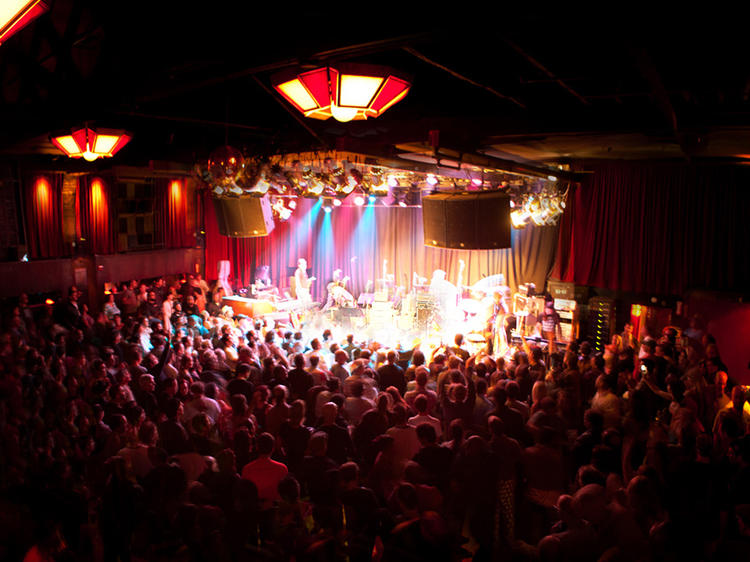 There are no frills at this venerable black box apart from a stellar sound and light system—it's all about the music here. The Independent has always showcased a wide variety of sounds from self-made artists; the calendar is filled with a mix of touring rock, pop, metal, rap, jazz, Americana, jam and otherwise undefinable acts such as Madlib, Sunn 0))), the Boredoms, Fiery Furnaces, High on Fire and Lyrics Born. The lineups and genres are unpredictable and change from night to night, but you'll always have a prime view of the stage at this intimate 500-person venue. 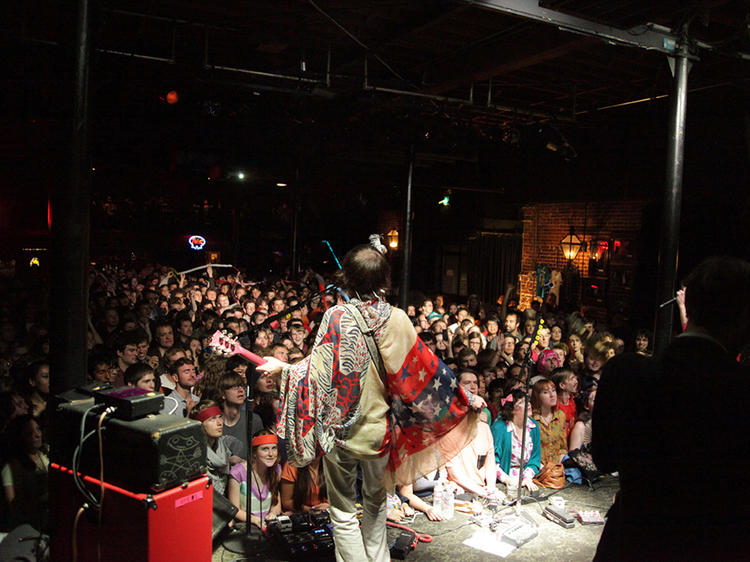 The 550-capacity Slim’s isn’t one of San Francisco’s most comfortable venues. Most patrons have to stand, sightlines are compromised by the floor-to-ceiling pillars and, on busy nights, it gets pretty steamy. Still, it’s one of the few places in the city for all ages (well, six and up) to enjoy a concert and therefore remains a rite of passage for local music fans. The schedule is mostly made up of rock bands, who play alongside a smattering of hip-hop acts, reggae groups and rootsy singer/songwriters.