For a quick bite of Seoul, craft beers and galbi tacos will suffice for day 1, but to fully indulge in authentic Korean food—that requires a whole different set of cutlery and table manners. As much as Koreans are eager to embrace American and European cuisines, we are dead serious about Korean food and eating in general. Walk into any restaurant in the city for a simple kimchi jjigae, and you'll find yourself eating through a table adorned with at least four banchan side dishes.

Korean food is not just about massive servings of savory broths, barbeque, and soul food, but it's also all about the clustered tables, side dishes you never ordered, and shouting for a refill from an "imo," an older and friendlier version of that girl next door. In Korea, everyone including your waitress and beyond is your sister and auntie. In turn, you are not a mere customer, but a son and daughter to be fed and tended to. So put down those burgers and get yourself to a Korean restaurant tonight—you'll find no better Korean food in the world than the stuff right here. Here's a list of some of our favorites.

The best local restaurants and Korean food in Seoul 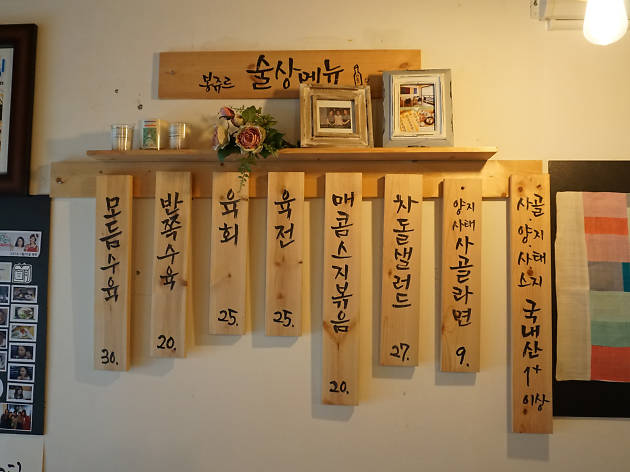 Bonjour Babsang is a Korean soup restaurant opened by a mother and her two daughters. The name of the restaurant comes from their goal to work until they can open a restaurant of their own in France. The menu posted on the wall is very neat. Each item is engraved on a long and thin wooden plate with calligraphy style fonts. Instead of using the original name of the Korean dishes, such as seollongtang, gomtang, doganitang, they instead use cute nicknames like bongbab (short for Bonjour Babsang) tang, clear bongbap tang, and red bongbap tang. They serve many dishes that go down great with a few drinks, such as suyuk (boiled beef or pork slices), yukjeon (meat pancake), and yukhoe (Korean style raw beef). Their ingredients are all locally sourced. As for the meat, they use 1+ grade Korean hanwoo beef for top quality flavor. When the meat is brought in, the blood is drained, the meat is boiled for two and a half hours under low heat and the fatty portions are cut away. This is their secret to making a clear and clean broth. Beef with chive bibimbap is also another popular menu item. Bean sprouts, beef, seaweed, mushroom, and chives are all piled on top of rice. They use soy sauce and sesame oil instead of red pepper paste to complete this bibimbap. With its aromatic flavors, don't be surprised if you can your bowl in minutes. From November through March they offer tteokguk (rice-cake soup) as a seasonal dish. 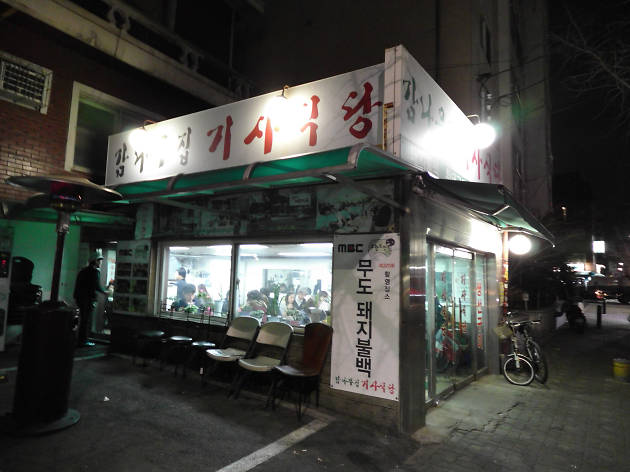 Taken literally, a "gisa shikdang" is a sort of diner for taxi drivers. These establishments generally sell dishes specialized around one main theme, such as baekban (a home-style meal with small side dishes and rice), gukbap (soup with rice), deopbap (bowl of rice with toppings), and donkatsu (pork cutlet). As gisa shikdangs' predominant customers are taxi drivers, food is served quickly, priced moderately, and tastes delicious. Around Seoul, there are many famous gisa shikdang that have been open for a long time.

Gamnamujip is a baekban house that is open 24 hours day. If you're looking for a homey, inexpensive meal in Yeonnam-dong, this is your place. Persimmon Tree House has been well-known for some time, but after a recent TV feature, even more customers have flocked to this establishment. We suggest visiting an hour before or after the usual lunch or dinner hour, so you can enjoy your meal without standing in line. A signature menu item is the pork bulbaek (sliced and seasoned pork with steamed rice). Other popular dishes include godeungeo jorim (braised mackerel), hwangtae gui (grilled dried pollack), and yangnyeom gejang (spicy marinated crab). A generous amount of side dishes are provided and a serving of geonbbang, mildly sweet hardtack bisuits, is offered as a complimentary dessert. The owner came up with the idea of serving these biscuits while thinking of taxi drivers who missed their mealtime and needed a quick boost of energy. 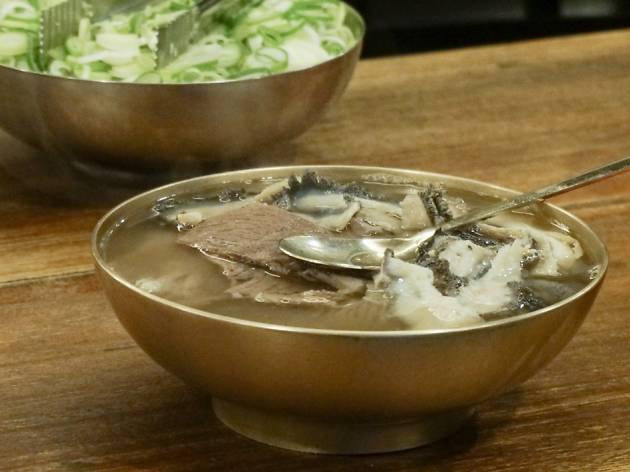 There's something special about old traditions, and even more so when they're maintained with sincerity. Step into Hadongkwan, where you can taste and see that special something. Initially located on a back alley near Cheonggye Stream 70 years ago, the original restaurant was demolished during a period of redevelopment. But the owner kept the original wooden doors and wooden tables and continues to use them in his relocated Myeongdong location. He made this gensture to console long-time customers who bemoaned the loss of a landmark. Their signature dish is gomtang (simmered beef soup with rice), a comforting meal one tends to crave when feeling exhausted, physically or mentally. A plentiful amount of rice and pieces of beef with soup made from hanwoo (Korean beef) stock are served in traditional Korean bronzeware bowls.

We suggest adding a handful of minced green onions to your soup. Before you gulp down everything, don’t forget to ask for "ggak-guk." At Hadongkwan, ggak-guk is a nickname for the juice from ggakdugi (diced radish kimchi). The piquant and sour flavors of ggak-guk add new depths to your gomtang. Hadongkwan normally runs out of ingredients by 4:30pm, so remember to stop by early get your fill of this savory, nutritious dish. 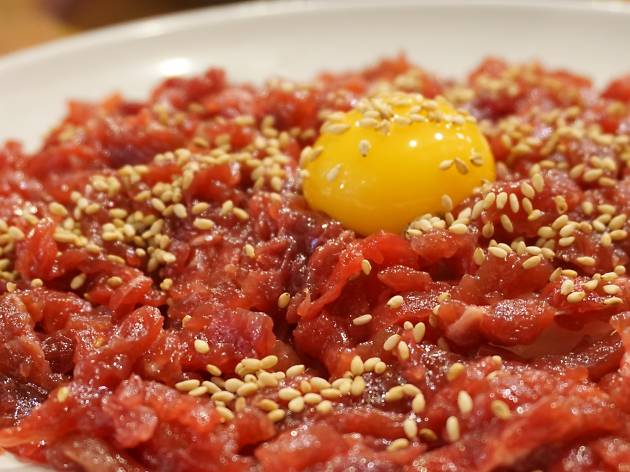 Yukhoe (Korean style steak tartare) is a very difficult dish to make. The raw beef must be tender and smell fresh, and the mixture of the few spices involved needs to be perfect so that it doesn’t overwhelm the original scent of the beef. Even though several yukhoe restaurants have opened over the years around Gwangjang Market, there’s a reason why people insist on going to the area’s first yukhoe shop. Two sisters, as hinted from the shop’s name, opened Jamaejib (meaning “store run by sisters” in Korean) forty years ago in a 16 square meter space in a narrow alley of Gwangjang Market. One dish of yukhoe cost 1,000 KRW at the time.

Today, it now prices in at 12,000 KRW, which is still a ridiculously good deal for yukhoe, which can cost 30–50,000 KRW at fancier restaurants. Jamaejib is not only cheaper, their yukhoe tastes better. Early at dawn, fresh meat is delivered daily. The meat is seasoned and set to marinate before being served. Their top secret recipe not only brings out the original flavor of the raw meat, but also blends perfectly into the meat. If you're looking for more variety, Jamaejib also serves yukhoe bibimbab and beef liver. Seven years ago, they opened a second restaurant right next door, and recently a third restaurant opened near Exit 9 of Jongno Oh-ga Station. 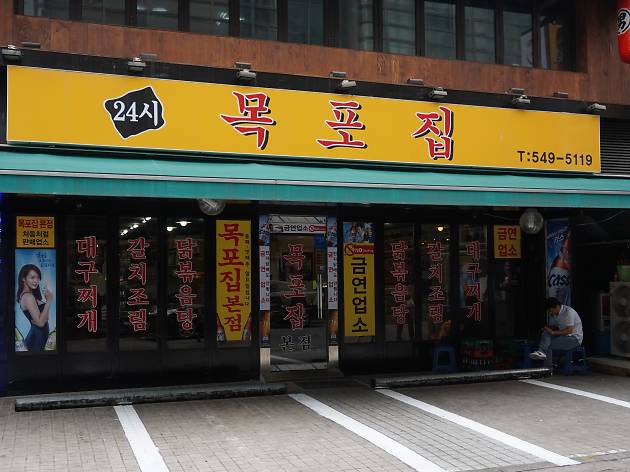 The name may throw some people off—though Mokpo is a port city famous for its seafood, Mokpo-jip specializes in dak bokkeumtang (spicy braised chicken). While they do have seafood dishes on the menu, including codfish stew, fried octopus, shrimp soup and braised cutlassfish, their strength lies in the chicken. They select meaty birds with plenty of flesh, braising them in a sweet and spicy sauce with generous chunks of potato and large pieces of savory rice cake. The resulting dish is perfect as a meal or a side to be eaten with drinks, and is also popular with nearby office workers during lunch time. In fact, Mokpo-jip has become so popular they had to open a second location nearby to seat everyone. It’s not uncommon to see patrons enjoying a drink in the middle of the day here, so don’t feel shy and kick one back in good company. Interestingly enough, they don’t serve one of Korea’s biggest soju brands here, selling instead soju from smaller distilleries like Joeun-day from Busan and Ipsaeju from Jeolla Province. 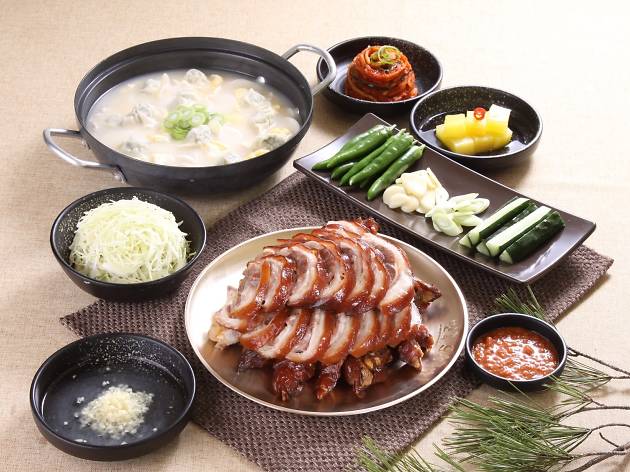 At City Hall Station, just past the Samsung building, you can always catch a whiff of oh-hyang (meaning “five spices”), a representative spice mixture of China. This scent wafts down from Manjok Oh-hyang Jokbal. Jokbal is pork hock, and if you're new to Korea and turned off by the idea of eating pig feet, you're seriously missing out. Manjok Oh-hyang Jokbal makes especially tender pork hock that basically melts in your mouth. We're not the only ones in the know—come prepared for a long wait. When the shop opened 26 years ago, it didn't even have a name, but it has since come to rank among Seoul’s top three jokbal restaurants. They differentiated their menu by serving a side dish of diced cabbage in a special garlic sauce instead of the usual pickled shrimp dip, and star anise is used to rid the smell of pork from the broth side dish. Apparently, special ingredients are added to bring out the tenderness of the meat, but this is tightly-guarded secret. In addition to their standard jokbal, Manjok Oh-hyang Jokbal serves variations including spicy hot jokbal and cheese jokbal. 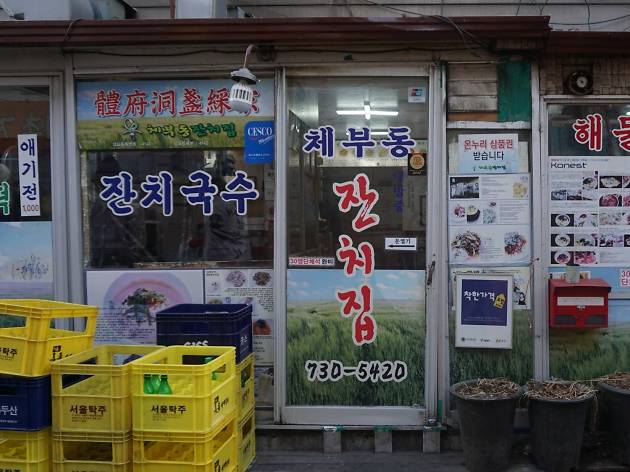 Chebu-dong Janchi-jib is famous for their simple but delicious food. Located in a humble market alley space with aluminum sliding doors, its prices are easy on the wallet. Once you enter, you’re overwhelmed by the savory scent of simmering broth and something frying. The menu includes thirty or so dishes ranging from various types of jeon (savory pancakes), and noodles to dotorimuk (acorn jelly) and dumpling soup. If you want something simple and soothing, try the deul-ggaesujebi (hand-pulled dough dumplings in perilla seed soup). The thick, nutty broth and chewy dumplings pair up superbly. It’s also a great place for gatherings, because their dishes are the perfect accompaniment with makgeolli (Korean rice ale). Plus, at a janchijib (meaning “house holding a feast” in Korean), it’s only right that you enjoy good food with good friends. 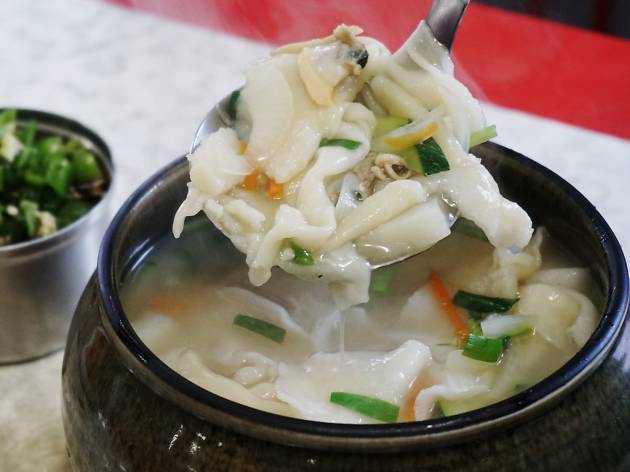 On rainy days, many Koreans crave sujebi, a simple and comforting soup with hand-pulled dough dumplings. The long line of customers waiting in front of Samcheong-dong Sujebi has become a familiar sight, come rain or snow. After boiling garlic juice, ginger, squash, carrot, and potato in anchovy stock to bring out deep and complex flavors, hand-pulled dough dumplings are added and boiled once more. The dish is served in a small clay pot with kimchi, made fresh daily at the restaurant, as a side dish.

Make sure you come hungry—serving sizes are generous. One mouthful leads to the next, as you slowly savor the natural taste of each ingredient. But the most important element to this dish is their soy sauce mixed with pepper. After adding the soy sauce to the sujebi, make sure the pepper is evenly distributed and then have a spoonful of the broth with a dumpling. The softness of the dumpling, kick of the pepper, and the various flavors from the soy sauce and soup create an astonishing taste that you won’t forget. Their pajeon (savory pancake with spring onion) is equally popular. You’ll find many tables ordering one pajeon and one bowl of sujebi, and we suggest you follow suit.

Read review
Get us in your inbox