What if Jesus were to descend upon Singapore for the Second Coming?

Best known for his playful parodies of classical masterpieces, local photographer Eugene Soh is referencing something quite different in his upcoming exhibition at Chan Hampe Galleries: the Bible. In The Second Coming, Soh imagines what it'd be like if Jesus makes his promised reappearance in Singapore – will he break bread at a kopitiam? The artist tells us more.

Why did you choose to play with the Second Coming in Singapore?

Because I live here. Plus, they also never say where he will come back, mah. Christianity has become so widespread that I'm guessing any country is fair game for the Almighty. Come to think of it, God may be communicating through me. This could be a sign, you never know. One of his favourite styles of communication is through individuals who met him on mountains, alone, with no witnesses. He may have seeded the inspiration in me when I was climbing Bukit Timah Hill by myself that one time.

You're right, you never know. Any other reasons?

I also decided on the idea when I found Jesus. The Jesus for my photos, that is. I got to know [spoken word poet] Marc Nair last year when we were doing an exhibition in Amsterdam. His face was beaming with holiness in the European sun. I found out later that we both happen to be speaking at TEDxSingapore. I asked if he wanted to be my Jesus during one of the TEDx meetings. #GodsMysteriousWays.

'Religion is not a game of cards – it is about your afterlife and mine. There are bound to be people who take offence.' 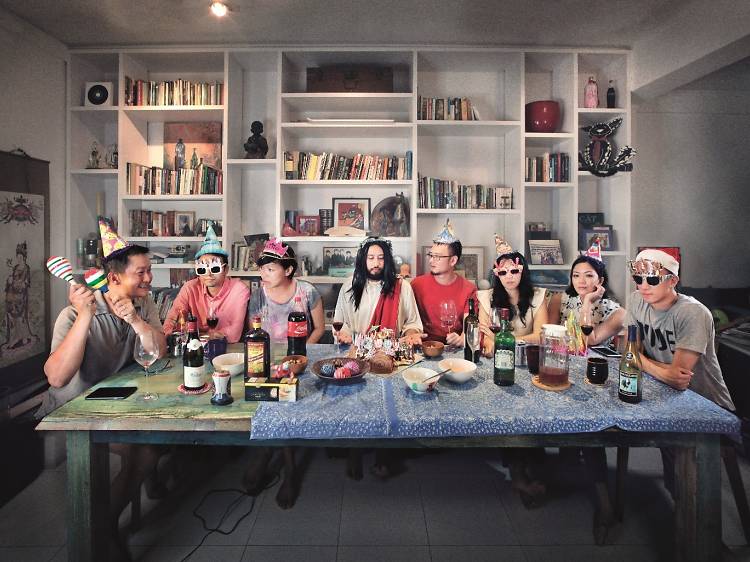 How much research did you do beforehand?

I grew up a Christian, so you could say I've been researching since young. I've recently stepped up my Bible studies with Bible.com. Bible.com is great! It comes in all languages including the million different English versions of the Bible. I recommend The Contemporary English version because of its clarity. I'm a Bible geek.

'The Last Christmas' looks more cheerful than 'The Last Kopitiam'. Why did you decide to do a different take on it, and are you hoping to convey a different idea in this newer image?

Yea! Spot on. The colourfulness is because it's a birthday party! I wanted it to contrast with the ominous news that Jesus brings. It's both a happy and dire moment at the same time. Just like his Second Coming, it's great that he's coming back to prove all heathens wrong. But also, at the same time, it means that we are all going be killed in a fiery blaze. Earth would be chao tar. The story I was depicting was perfect for 'The Last Supper', so I decided to ignore [the fact that] I've already done a 'Last Supper' and just do it again. The scene may not have worked as well any other way.

Religion is not a game of cards – it is about your afterlife and mine. There are bound to be people who take offence. Heck, there were ultra-conservatives who took offence at my first 'Last Supper'. It does bother me, yes. Which is why I'm not depicting personal opinions in this new series. Art critics may be offended that I am expressing no opinion again [laughs]. You might get jailed for opinions in Singapore.

This Jesus series is a direct interpretation of my favourite Biblical narrative: the apocalyptic one. The Biblical Jesus narrative is apocalyptic, but the Bible does mention that we’re supposed to look forward to it with joy – hence the cheerfulness [of the images]!

'I'll ask if I can video wefie our conversation with my Sony tablet, or whether [Jesus] prefers stone tablets. Eventually, if he allows me to calm down, I'd ask more important questions like: what do you think of Donald Trump?' 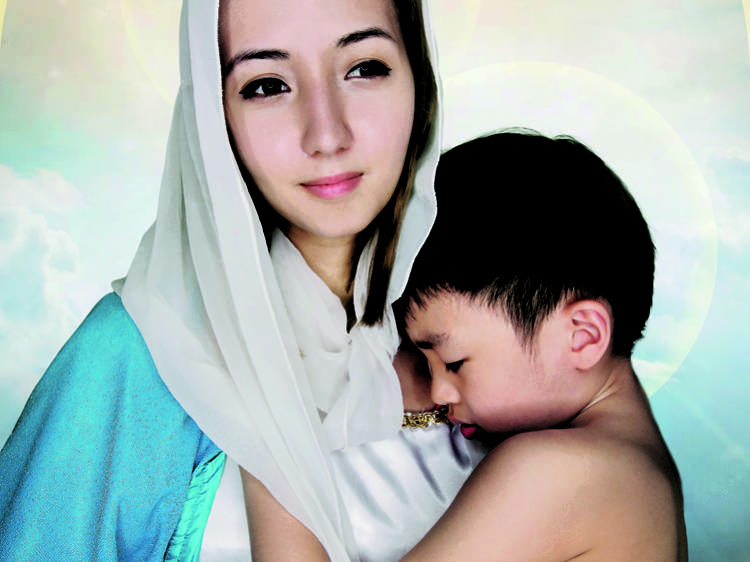 If Jesus does come to town and you get the chance to meet him, what would you ask him?

Oh boy, I would be so excited that I think he'd know my first question just by looking at my face. It would be, 'Is that really you? What took you so long?' And then, he would be like, 'Yes, my child. It is I, the Alpha and Omega, creator of all things… except mosquitoes. The devil made those.'

Then I'll ask if I can video wefie our conversation with my Sony tablet, or whether he prefers stone tablets. Eventually, if he allows me to calm down, I'd ask more important questions like: what do you think of Donald Trump? Do you like 'China Wine'? Why have you taken LKY away and where is he now? Do indigenous tribe people who have no chance of being exposed to God's word go to heaven or hell? What about me, do you already know where I'm going to spend eternity?

We love the whimsical nature of your photos. Who are some of the people who influenced your style?

Read Eugene Soh's comments on some of his works 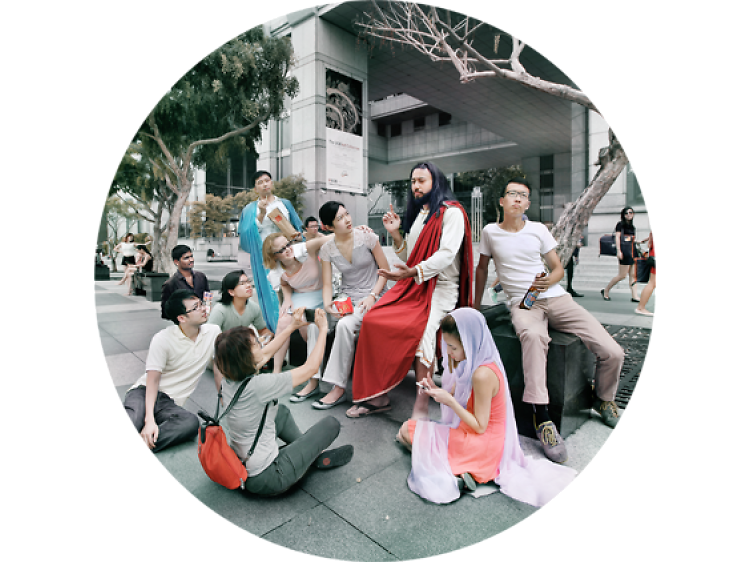 ‘Like the last time he was here, he would probably have huge crowds following him, either on Twitter accounts or from people who physically follow him. Depending on what he might say, he may give rise to a new cult or denomination... just like the last time.

Whatever he might say, whether it be a new set of commandments or the unchanged rules, it would go down in history as the New NEW Testament, or rather, New Testament 2.0. This new edition would be the best documented part of the Bible and would come with pictures!’ 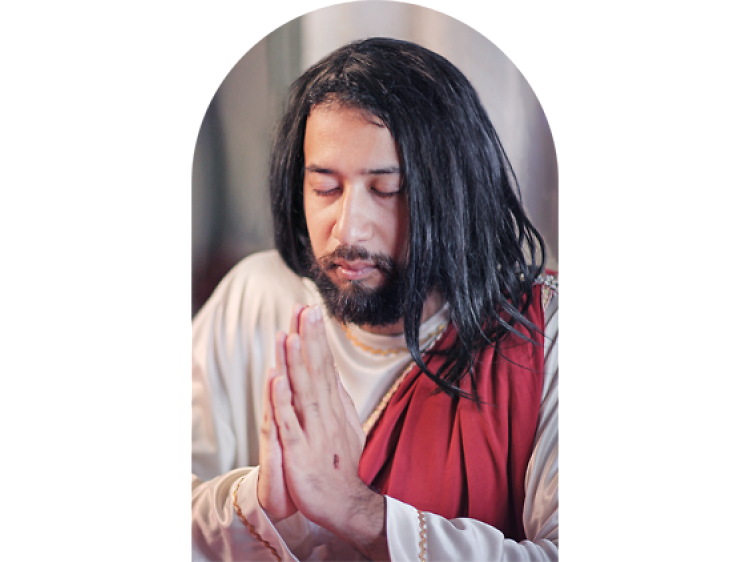 ‘I've seen many depictions of Jesus praying. I didn't think much of them but now that I know what I know [from the Bible], it does seem like he is praying to himself... Or rather praying to his dad, God, who also is technically himself in supreme being form. I mean self love is a wonderful thing, but this would be pretty next level narcissism even by Kanye West standards.

This is something I am curious about, like how does his relationship with his father work? Are they part of the same entity with the Holy Spirit, or are they two individually thinking beings who can possess opposing views?’ 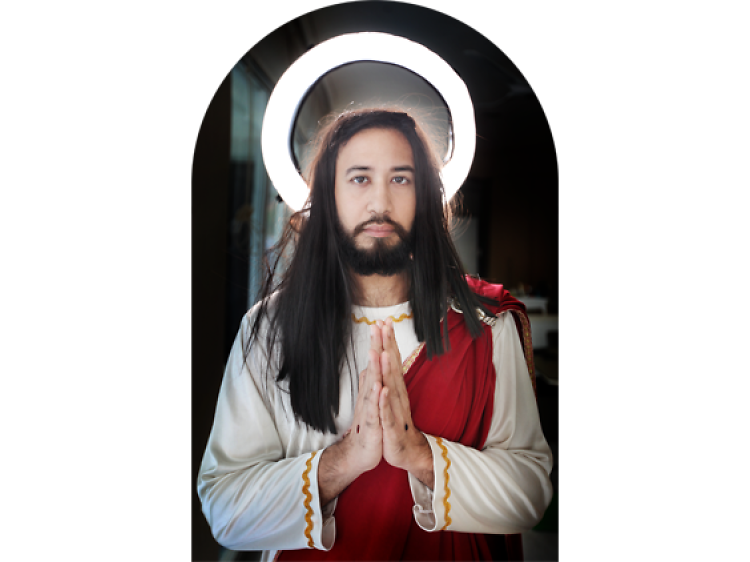 ‘Standard portrait of Jesus. I was going for something like the wood panel self-portrait by Albrecht Dürer. I used a photographic ring light for his halo [to depict] the orthodox Greek kind of halo where it’s a circle behind the head, instead of the modern day circle-floating-above-the-head halo.’

‘This photo depicts a possible moment when a supreme being (Jesus) returns to earth and confirms the destruction of the world at his birthday party. [To provide some context,] the Bible says that Jesus will return soon after his death, but we were told neither when, nor where.

His appearance would mean that his dad will be scorching the world shortly (when the Armageddon will take place). My photo depicts a solemn moment during his time on Earth, when he confirms that it is the last Christmas. How would people react to news of their impending doom?’ 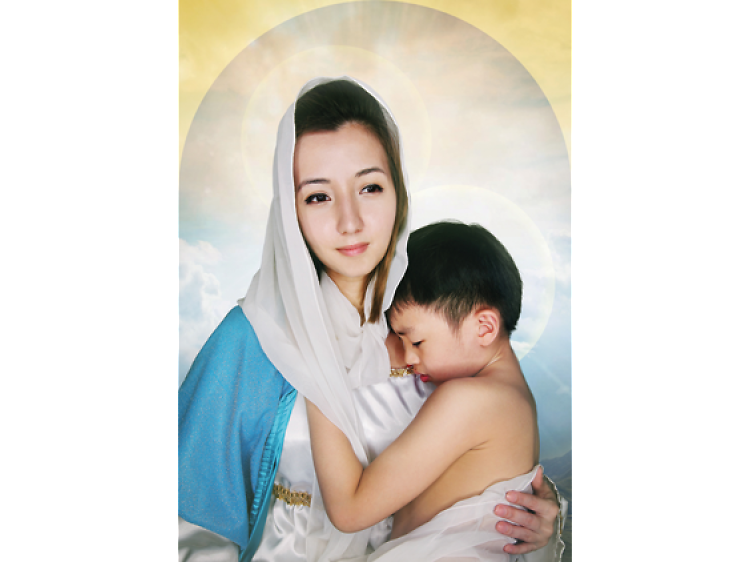 ‘Jesus and his earthly mother. Western art history depicts Jesus and Mary as beautiful white people, though it is likely that Jesus was more central-Asian looking. But who knows for sure? My guess is that his image has been in the hands of artist impressions, so here is my take to be thrown in the mix – my fiercely intelligent nephew, Kieren, as baby Jesus and [local beauty blogger] Alene Breddemann as Mary! Multi-racial, yeah!’ 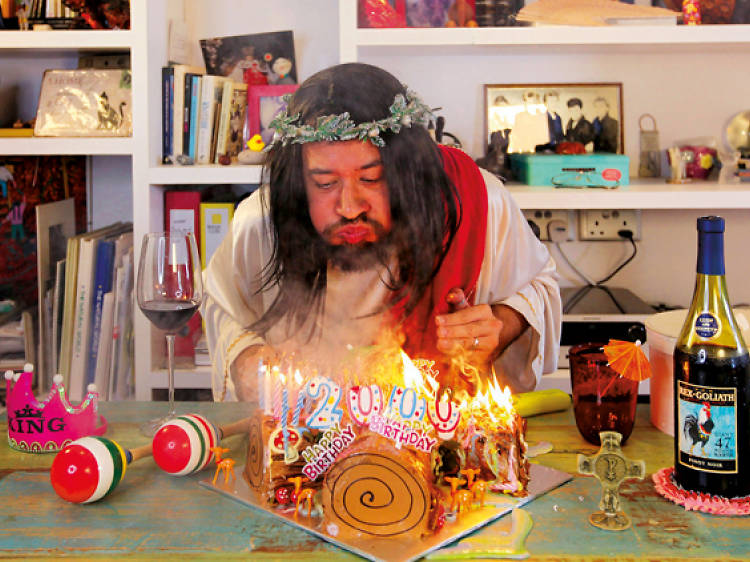 ‘Merry Christmas and Happy Birthday to Jesus! It is important and perhaps old news that no one really knows if he was born on Christmas day – his DOB is not mentioned and it would have been freezing to be born in an open barn at night in that part of the world. Maybe he had a holy fire somewhere; anything is possible for the supreme being.

Many Biblical scholars believe that it is probable that his alleged birthday "faked-it-till-it-made-it". God ain't the clarifying type either, much less for trivial details like this.’