From geeking out over license plates to an unfortunate incident with dentures, these are the worst dates our readers have been on (completely unedited, of course).

‘On our second date, he insist that we take away crappy food to sit on the steps in front of a shopping mall to eat. He said nothing while we ate and forced a kiss on me later.’ – Shi Min, attached female in her 20s

‘This date paid for everything and when I reached home, proceeded to total up the cost over SMS and divided it by two and asked me to pay for it by PAYLAH.’ – Charmaine, attached female in her 20s

‘Date completely did not look like what was on Tinder.’ – Vipula, single male in his 40s

‘An aimless walk-around because the dude was enchanted by the plot of Before Sunrise.’ – Cherylene, single female in her 20s

‘A guy who kept looking at my chest and said you look pretty in that dress.’ – Celine, attached female in her 30s

‘Guy saw me for the first time and said, "Oh you're bigger than your photos on Tinder.” I could have told him the same, that he looked "smaller", but I was nice.’ – Pamela, single female in her 20s

‘A guy drove me around at 2am waxing lyrical on all the old housing estates in Singapore because he's a real estate agent. Then we sat in a café and I listened to him wax lyrical about carplates because he is a carplate otaku. I got home at 6am legitimately pooped and in need of some serious alone time.’ – Sihui, attached female in her 20s

‘Went out with a girl for lunch. End up she ordered me to return library book for her and say that she will come over the next day to help with laundry and clean up my place. And this all happened on the first date after we exchange number during a night of drinking with mutual acquaintance.’ – Kian, attached male in his 30s 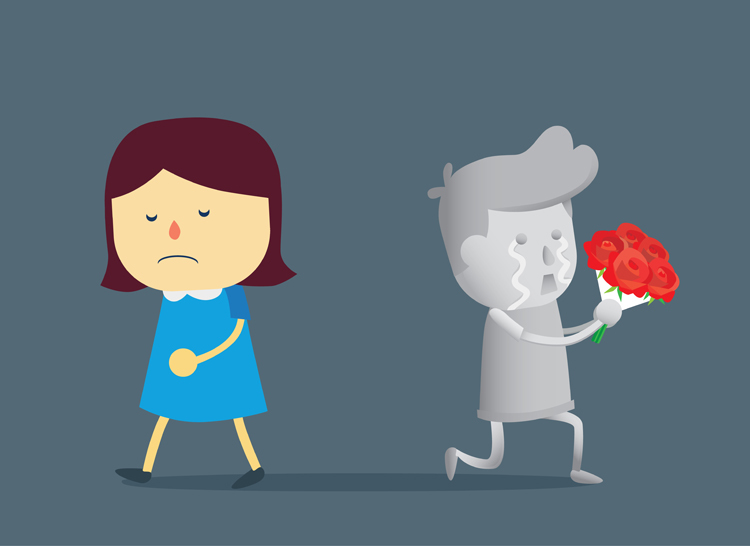 ‘Last half of the dinner was filled with awkward silence. To top that off, he didn't even offer to pay for my dinner by calculations my share and then whip out his velcro Pacific Ocean (mind you, this happened in 2010) to make payment. Trust me, that velcro sound when he opened his wallet made the date simply unforgettable.’ – Hae Yun, attached female in her 30s

‘The guy asked me back for 20 cents that I owed him for lunch.’ – Mango, married female in her 20s

‘So I met this guy on Skout dating app. He rides a bike (those scooter kind) and he asked me out for supper. So I was like okay let’s go. And he really came to meet me. But I refused to sit on his bike cus he brought a REAL OLD HELMET. So we walked to the prata shop. He didn't want to eat, so I ordered roti john. When the roti john arrived and I started eating, he stopped me and asked if he can have a piece. Initally I was like, "Wot, okay". So he took my knife and fork and cut for himself to eat. I was quite grossed out already. But nevermind. He then proceeded to complain about his life and THEN HE TOOK OUT HIS DENTURES and said that he has missing teeth cus of his army experience. Then proceeded to take my knife and fork and cut another piece for himself. I WAS LIKE WHAT THE F***. I WAS SO HORRIFIED and disgusted, I lost my appetite immediately and said I was full and I wanted to walk home. I also deleted the Skout app ’cuz I can’t take that sh*t no more.’ – Clara, single female in her 20s

‘After breaking up with my ex-girlfriend, I knew I had to get back in the “game”. But since my charm skills were rusty, I, like any 20-something-year-old guy, decided to take the easy route and installed Tinder and began swiping right during my daily 40 mins MRT ride (Oh how I miss the sweet old days when Tinder didn't have the swipe limit). A girl I matched with seemed to have, what I call, the most adorable puppy. So, we texted back and forth before setting up a dinner date at Boat Quay. During our dull conversation, she said she hadn't done anything adventurous in a long time and suggested we try the Reverse Bungy ride at Clarke Quay after dinner, to which I reluctantly agreed. Within seconds of being flung into the stratosphere, the adventure ride turned into a Merlion ride with her barfing her three-course Mediterranean dinner over both of us. I had to drop her home in a cab. Needless to say, we never had a second date.’ – Siddhant, attached male in his 20s

‘It was only our second date and he surprised me with a dinner with his mum and grandmother…’ – Joon, attached female in her 30s

By Time Out Singapore editors