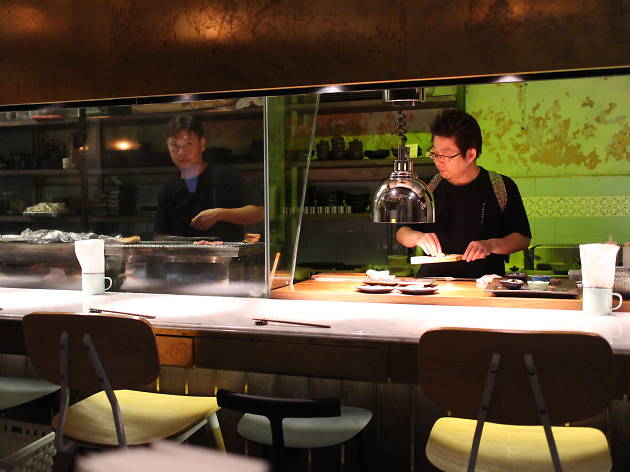 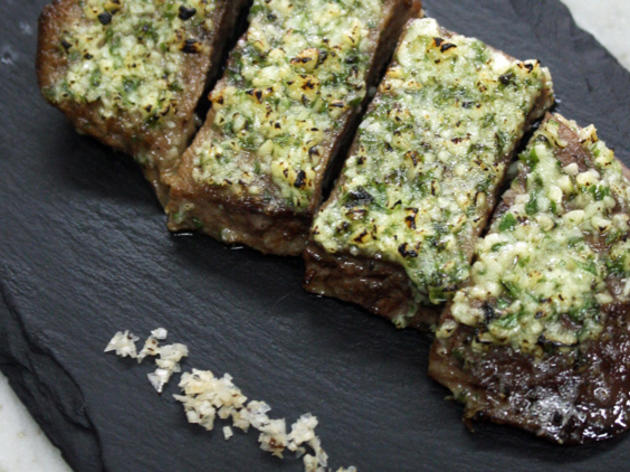 Wherever Loh Lik Peng sets up shop, the buzz follows – this time, it’s for the serial restaurateur’s hawker-esque yakitori bar. The space, by day, serves up mee pok by heritage hawker Hua Bee, and dressed up Japanese dishes and tipples at night.

As befitting of Loh’s hipster modus operandi, evening diners must enter through a metal door in the back. The décor of course ticks all the grungy hipster boxes – Hua Bee’s traditional marble and wood kopitiam tables and old utilitarian wall tiles are kept alongside distressed paintwork, intentional rust, unfinished wood and burnished copper.

Style over substance seems to be a common thread throughout the Bincho experience – with general cluelessness from the staff, who aren’t particularly helpful in explaining menu items (written messily in Japanese on a chalkboard, with one-word English translations) – except for recommending the premium Bincho omakase set ($80 for 12 dishes), which promises ‘more premium’ cuts of chicken alongside a number of veggie dishes. There’s also a Sakura set for $50, with ten dishes, and à la carte options (ranging from $5 for grilled atsuage tofu to $18 for grilled squid or fish cakes and $68 for grilled Wagyu beef); each diner must also pay a compulsory charge of $8 for unlimited rice, salad and tea.

As with most yakitori places, portions are tiny (about one grilled stick per dish) – in the case of the premium set, there was a stick of grilled breast flecked with truffles, which ended up dry and tasteless in the mouth; plus two dishes of chicken neck, which turned out to be the highlight of the meal. The first style was braised, while the second was minced tsukune-style, coated with a raw egg yolk, providing a nice juicy bite. Ultimately, neither justify the price of choosing the premium set; several dishes also featured a shredded boiled chicken breast topping, which was clearly prepared in a big batch to sprinkle on.

Besides the two omakase sets to pick from, you might be tempted by the Miyabi hot pot set to share ($100/two) that includes table-side service by one of the restaurant’s servers, but we don’t recommend it. With bland chicken broth as the base, the added minced chicken, veggies and ramen hardly intensified the flavour of the soup. Even a starter (chicken karage and an appetiser) and a cheesecake dessert for two, the small portions of meat soup add-ins don’t warrant its hefty price tag, though the amazake cheesecake (available with all three sets) did offer a bit of redemption, topped with the lightly sweet, slurry-like lees of sake (and prepared offsite in Restaurant Andre’s kitchen, we’re told).

Beyond the generally lackluster food, there’s also little excitement throughout the narrow kitchen – a seat at the bar (away from the echoey kopitiam main dining room) affords the best view of chef Asai Masahi at the charcoal grill, but there aren’t any flames leering at the cook or sizzle from the grill. In fact, there’s barely any passion at all (a distinct contrast to the viseral experience at Burnt Ends, also by Loh and the Unlisted Collection).

What prevents Bincho from being a complete letdown are the drinks, curated by The Library’s Stefan Ravalli (also under the Unlisted Collection). Following the Japanese concept, the bar is stocked with a comprehensive range of specially sourced smaller-production beers and sakes from Japan (plus some local brews), such as Hitachino Nest’s Red Rice Ale and Minoh W-IPA ($19). Rare whiskies such as Ichiro’s Malt Card Series Ace of Clubs ($75/dram) and deadstock Kawasaki 1982 Whisky Live Tokyo 2011 ($48/dram) are likewise swoon-worthy for aficionados.

Cocktail-wise, Ravalli offers some incredibly sweet Japanese-ingredient cocktails like the Mugi Mule ($22) of barley shochu, ginger beer, bitters and lemon, as well as the Hardboiled Wonderland ($25) of Nikka steeped with apricots, dry sherry, vintage umeshu and shiso bitters. Definitely come back for the drinks, but make sure to get your fill of a nice dinner elsewhere before coming – or risk breaking the bank for food that’s not worth its salt. Natasha Hong