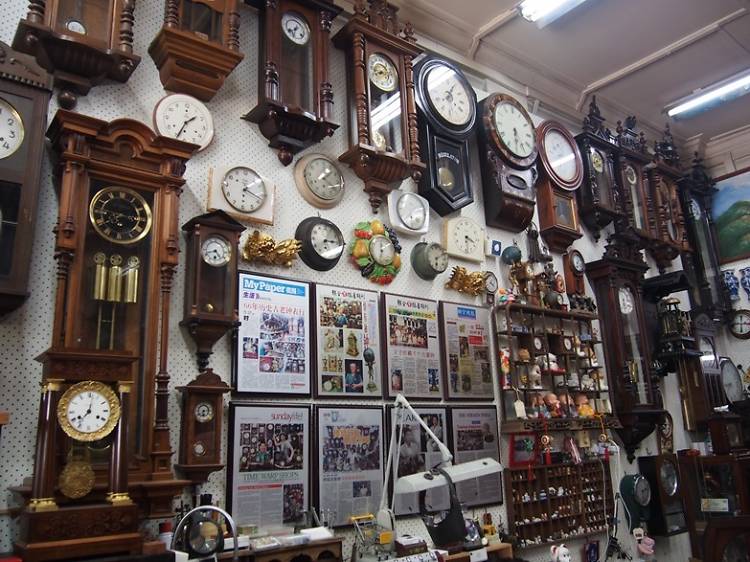 Clocks of all shapes and sizes occupy every possible nook and cranny of this two-storey shophouse. Some have been restored to their former glory, but most are waiting for their turn to be tinkered by second-generation owner David Lim, 55, or his son and protégé Shawn, 23.

Located at the end of a sleepy, sun-drenched street in Upper Serangoon, the shop is quiet, punctuated only by lulling chimes as the duo work on mending timepieces. It’s a job that requires fine tools, intense concentration and years of experience passed down through hands-on practice since the shop opened in 1947.

Despite his store’s name, David doesn’t deal in watches. He gave that up about a decade ago, deciding to focus on antique clocks instead – they’ve a longer and more interesting history that appeals to him. Sourcing from overseas dealers, regular customers and even karung guni, David has amassed a collection so vast that it extends into his home and, at one point, into his toilet. Asked how many he has and he simply shrugs: too many. 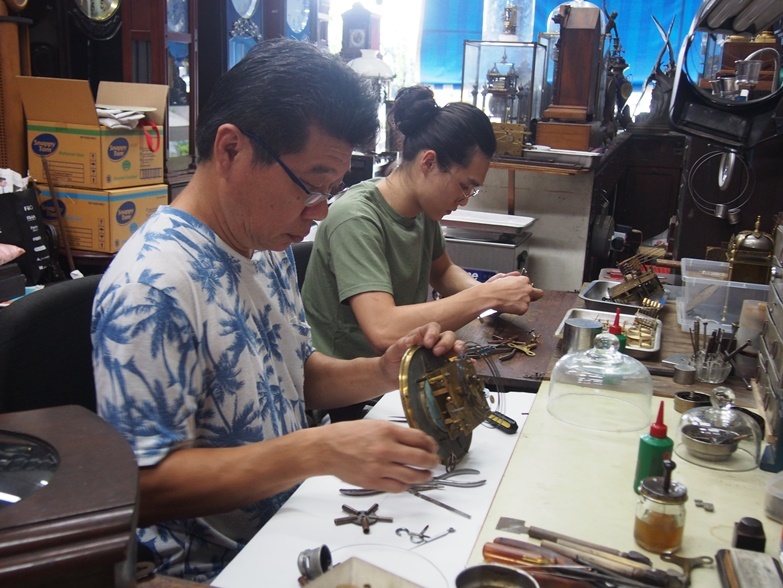 David Lim and his son

While repairing and restoring clocks – from grandfather’s clocks to a rare 19th-century, French-made Oriental clock – is the mainstay of the business, the father-son pair also handles gramophones, musical boxes, or, as David so succinctly puts it, ‘Anything with gears in it’.
Read more 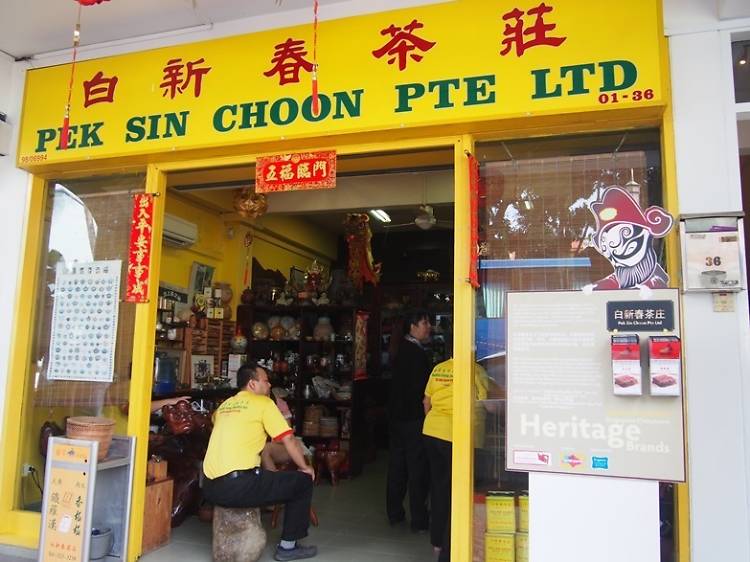 As one of Singapore’s oldest tea merchants, Pek Sin Choon has survived multiple redevelopments, relocations and even a war since its establishment in 1925. The brand now supplies its tea leaves to almost 80 percent of all bak kut teh shops in Singapore as well as some Chinese restaurants, most notably Din Tai Fung.

Helmed by fourth-generation owner Kenry Peh, the tea shop maintains many traditional practices. Every day, up to 120 kilograms of tea leaves are blended and roasted with a woven basket and made-in-Singapore oven, the former of which is as old as the brand itself. The women of the family will then perch around a table, wrapping tea leaves in pink paper used by Chinese medical halls – one pack at a time, like how it was done in the past.

Sometimes, if you’re lucky (and curious), Peh, who’s quite the storyteller, will be around to impart his knowledge about the local tea culture while you sip on freshly brewed tea. You’d think that only the older generation will stop by, but the 47-year-old says he’s seeing more young folks pick up the habit after learning about the health benefits of tea. 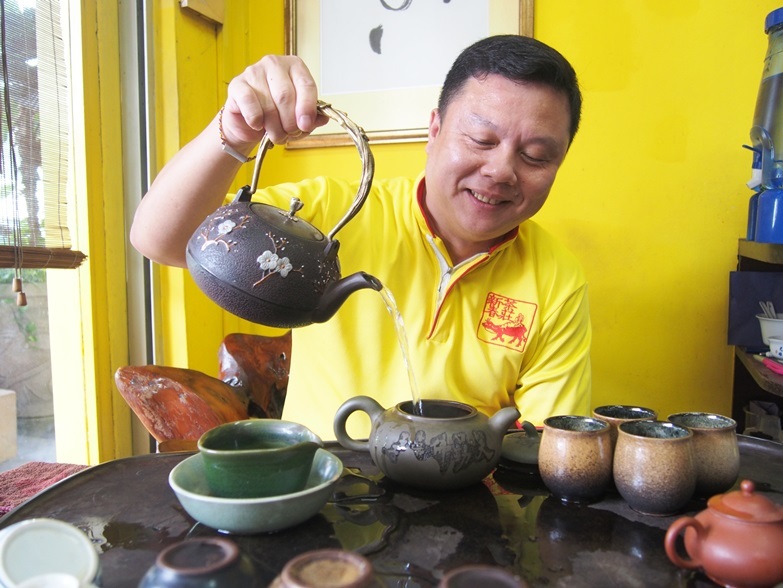 The most famous of Pek Sin Choon’s offerings is Unknown Fragrance ($52.50/tin), a top-secret blend of oolong tea varietals. Quality is of utmost importance to the store; all its tea comprises full leaves, even the affordable White Fur Monkey tea ($8/tin), which is also used in religious rituals. 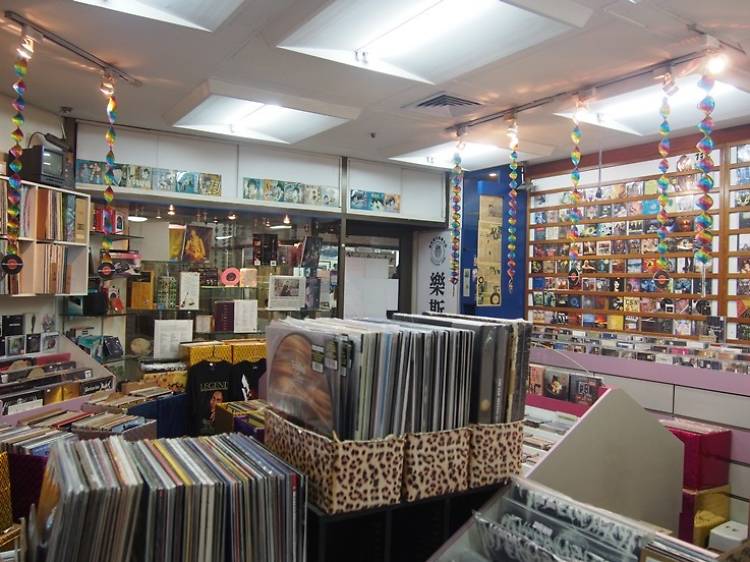 Music to his ears

Stepping into this record store is like taking a trip back in time. Vintage and new vinyls spill out from crates, walls are lined with CDs, and there’s even a small corner for cassette tapes going for a dollar a pop. Spotify, what?

You don’t need us to tell you that vinyls are back in the mainstream – but Roxy has been serving the wax faithful since 1962. Their father handed the reins to the store to current owner Paul Lim, now 58, and his two brothers in 1983, and music fans will recognise the former’s friendly face every time they step in.

A treasure trove of both old and new titles, Roxy carries a huge variety of music, from The Beatles and The Zombies to Adele and the Frozen OST. Crate-diggers looking for rare first-presses, head to the counter and ask to see the collectors’ lists: one of Lim’s most prized records is a never-before-played Wings’ Back to the Egg. It goes for a cool $4,500. 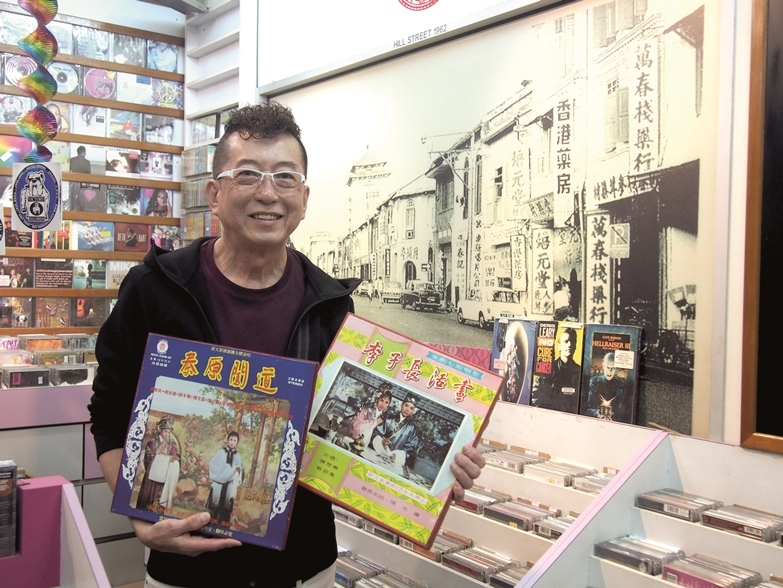 In the ’60s and ’70s, Roxy also ran a label, Precious Urn Records, that specialised in Teochew opera. It produced 7-inches and cassettes of local Teochew opera and Mandopop musicians, the most successful of whom was Zhang Xiao Ying – she went on to become famous for her a-go-go tunes. The label has since been retired, but a few albums can still be found in the store. And we gotta give props to Lim for being a fervent supporter of homegrown music: local albums, merch and tickets to gigs can be found here. 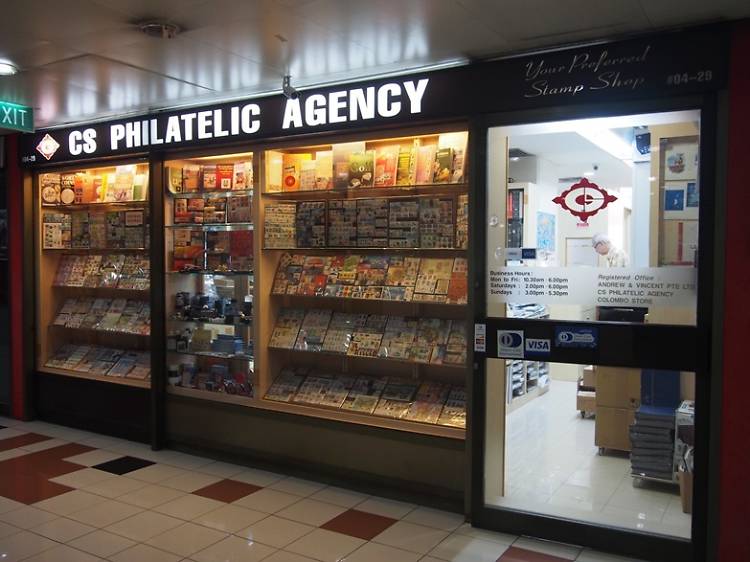 Remember the days when we used to gingerly peel off stamps from envelopes and keep them in a book? Most of us probably gave up this hobby, but not Tan Chun Lim. The 71-year-old is obsessed with stamps, so much so that he set up this store – originally in Colombo Court (now known as High Court) – as a ‘side project’. Even in the face of dwindling interest in stamp collecting, Tan maintains the shop as a hobby and for a group of regulars.

Tan’s love for stamps began in secondary school, when he used to barter these little squares with friends. But the student is now the master: Tan participates in local philatelic conventions, has a second outlet in the Singapore Philatelic Museum and is the author of Singapore Postage Stamps Catalogue, which he updates every four years. Show him any stamp ever produced by SingPost and he’ll be able to tell you about its origins. Yeah, he’s that crazy about them. 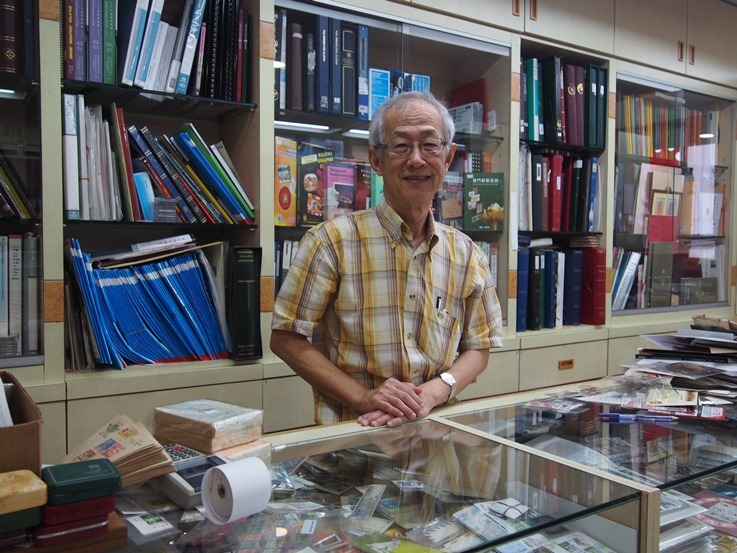 Unlike other philatelic shops, Tan’s focuses solely on stamps – he doesn’t deal in coins or other knick-knacks. The range runs the gamut from souvenir to collectors’ stamps, such as the iconic Penny Black, the world’s first stamp used in a public postal system when it was issued by the UK in 1840. 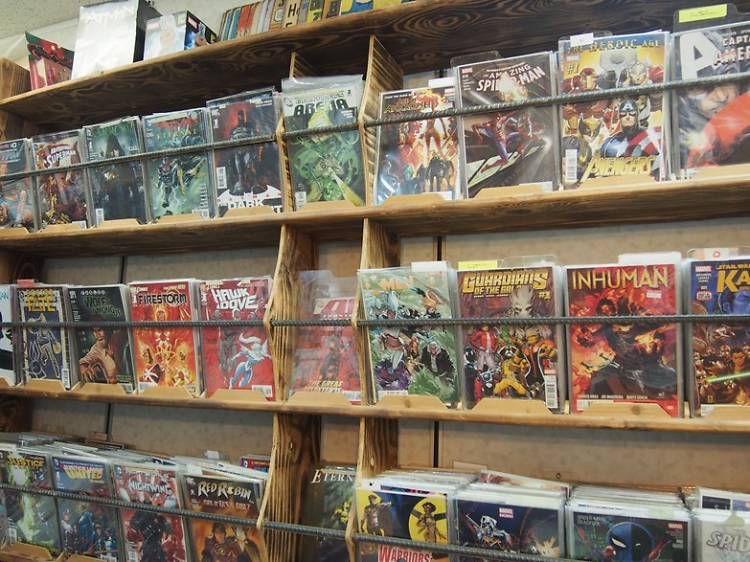 Amid rows of dark LAN shops in the basement of a dank shopping centre, this brightly lit store sticks out like a sore thumb. Rows and rows of plastic-wrapped comics stand on as many shelves, making it one of the rare places where fans can come in every week for their dose of heroes and villains.

In 1987, Comics World was birthed over owner Bill Teoh’s frustration with larger companies charging inflated prices for comics. Popularity of the art form declined in the noughties – he blames video games – forcing most of his competitors to shutter. But Teoh endured. And now, the legion of DC and Marvel blockbusters in cinemas have attracted a new breed of fans, and comics are fashionable once more. So it’s no surprise that issues featuring the likes of Deadpool, Superman and Spider-Man are among Teoh’s best-sellers, even displayed in the shopfront when shipments arrive every Tuesday. 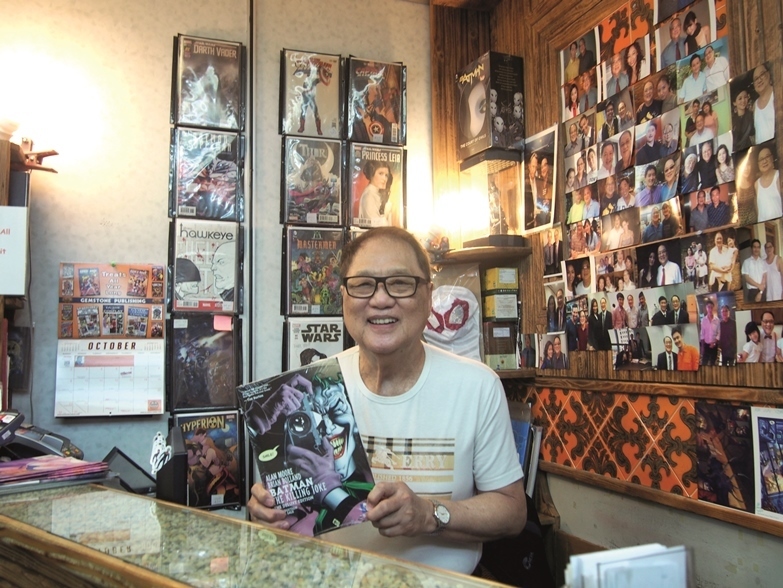 And how’s this for irony: Teoh once sat on the censorship committee that banned the importation and sale of comic books in Singapore back in the ’70s. With the ban now lifted, the 82-year-old stresses that he was never against comics. Batman is his all-time favourite superhero – an homage to his career in the Singapore Police Force – and he grew up reading British children’s comics such as The Beano. 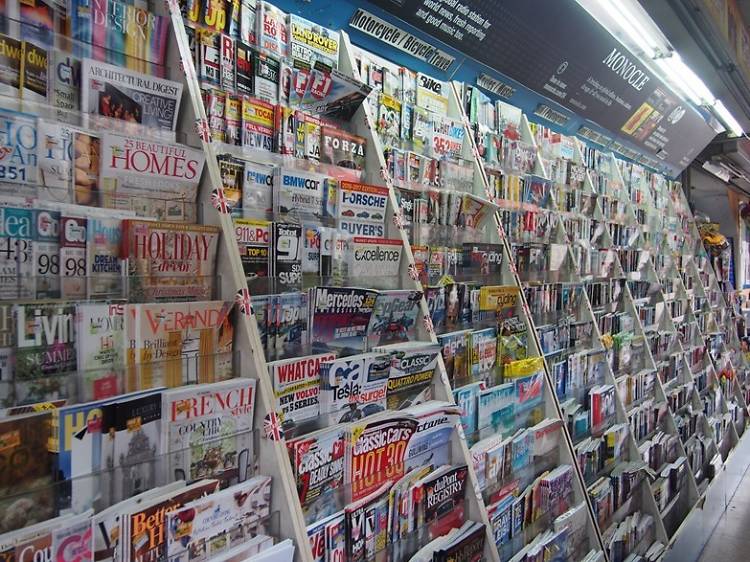 Move aside, Kinokuniya – this newsstand can trace its roots back to decades before the Japanese chain set foot in Singapore. Although Thambi Magazine Store in its current incarnation only came about in 1996, it started out in the ’40s, when third-generation and current owner Sam Thambi’s grandfather would deliver newspapers around Holland Village, at the time a kampong. Singapore was still under British rule, and it was Sam’s dad who started a shop hawking foreign magazines to the Brits living in the area. Even the war and Occupation weren’t enough to dent Thambi’s operations – unlike, perhaps, the digital revolution. 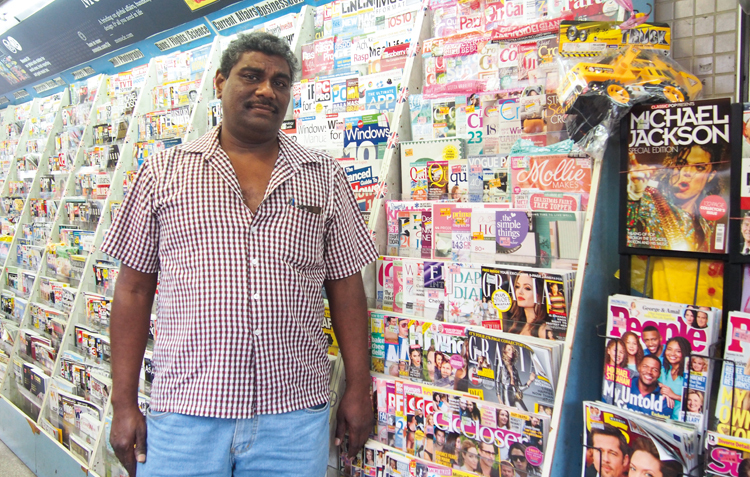 At its peak, the newsstand carried 7,000 titles from all around the world, now reduced to about 3,000. From the usual fashion glossies to the likes of Monocle – Sam brings in at least a hundred copies of the latter – you’d be hard-pressed to find a publication that Thambi doesn’t carry. Every topic, from architecture to automotive even to weekly gossip rags, is so well stocked that it puts your neighbourhood petrol kiosk’s newsstand to shame.