After three days in Siem Reap, we were about to give up. We tried asking locals (they pointed us towards the touristy Pub Street for pad Thai) and we tried any stall that looked promising, but a minor bout of food poisoning later, it seemed that the Cambodian street food scene is beyond the grasp of the non-Khmer-speaking tourist. Thankfully, we booked a tour with Siem Reap Food Tours for our fourth day. 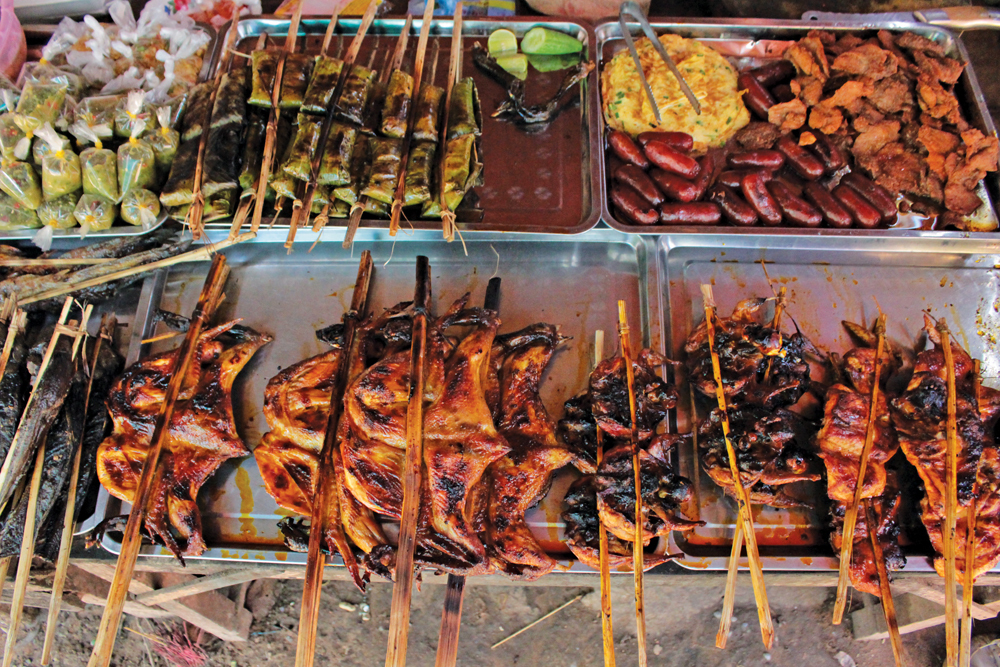 A bit of background: Halcrow used to work as a chef in a two-Michelin-starred restaurant in Scotland and Cuisine Wat Damnak (currently number 43 in 2016’s Asia’s 50 best) in Siem Reap; and Goldberg has been based in Siem Reap since 2010, writing about food and travel for the likes of The Wall Street Journal and CNN. The duo has spent years getting to know Khmer food, culture and language, and the results paid off. During the tour, we watched as Halcrow joked with vendors and placed orders for food with ease.

Our first stop of the day (we went on the morning tour, but evening tours are available as well), Psar Leu (meaning ‘Old Market’) is a photographer’s dream. Sunlight streams in between umbrellas, colours bloom from the surrounds, and baskets overflow with produce like catfish, grapes, garlic and doughnuts. Cameras clicking frantically, we followed Halcrow into a labyrinth of stalls, manoeuvring between hunks of freshly butchered meat and tubs of fermented foodstuffs, before coming to a stop at a nondescript hawker stall. 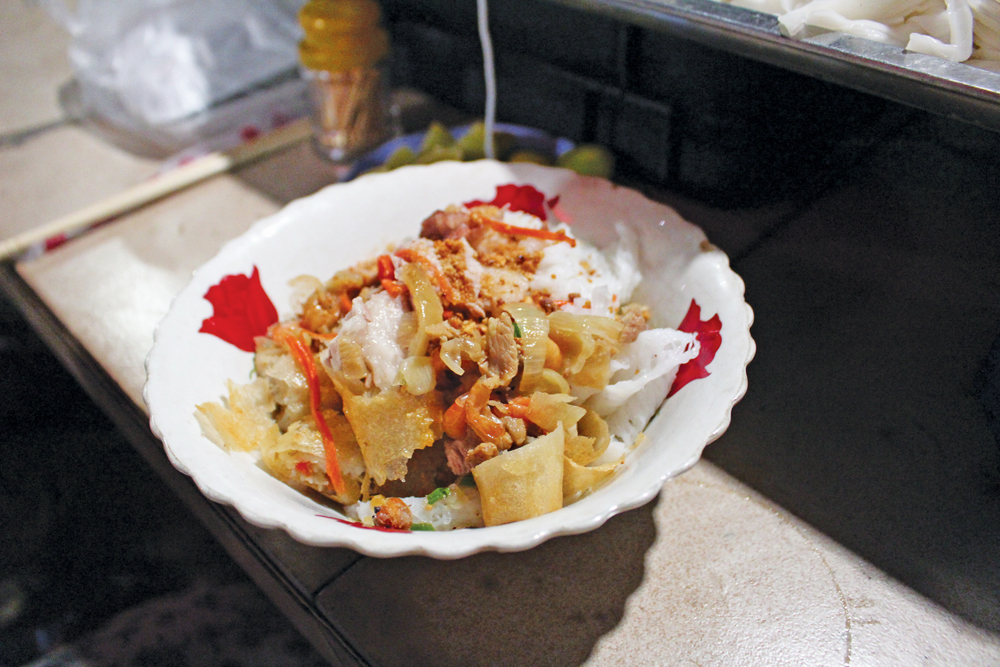 We began with the banh sung – a rice noodle salad in which ribbons of fresh rice noodles are
reaping tossed with spring rolls, greens, sweet-sour cucumber pickles, crushed peanuts, bits of pork, small crunchy shrimp, a dash of lime juice and fish sauce – which started things off on a good note. We had almost finished it when we were reminded that this is a food tour and that we should pace ourselves. We polished it off anyway.

As we continued exploring the market, Halcrow kept up a running commentary and pointed things out (prahok, a fermented fish paste integral to Khmer cooking; how locals use sugar palm fruit in their iced desserts; the history of red ants and larvae stir-fries in Khmer fare). More culinary highlights awaited at the market – a plastic bag of freshly pressed sugar cane juice, some kueh bahululookalikes baked over charcoal, skewers of bananas caramelised in palm sugar. We would’ve gladly spent the whole day here, but it was soon time to move on to the next destination. 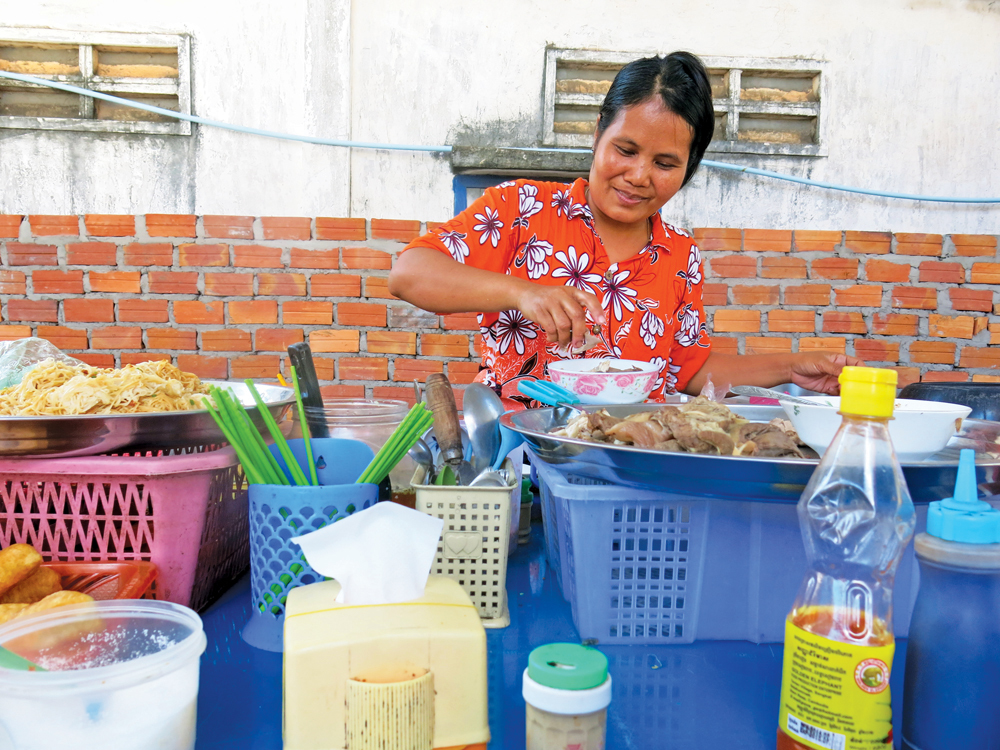 Trundling along in the tuk-tuk, past paddy fields and the occasional temple (it’s almost within Angkor Wat territory), we munched on spongy palm sugar cakes from the market and talked about local politics before arriving in a little village. Here, residents still make rice noodles from scratch.

We watched the laborious noodle-making process. Flour and other ingredients are painstakingly pounded and kneaded into dough, which is put in a type of mill to be pressed. Someone sits on top of the mill to push the weight down. This presses the dough through the holes at the bottom, which makes the thin strands of noodles. The translucent rice vermicelli are then gently folded into neat little bundles and placed in banana leaf-lined baskets before being delivered to restaurants in town. These noodles are usually used for num banh chok, the unofficial national dish of Cambodia that’s made with the aforementioned fish paste. 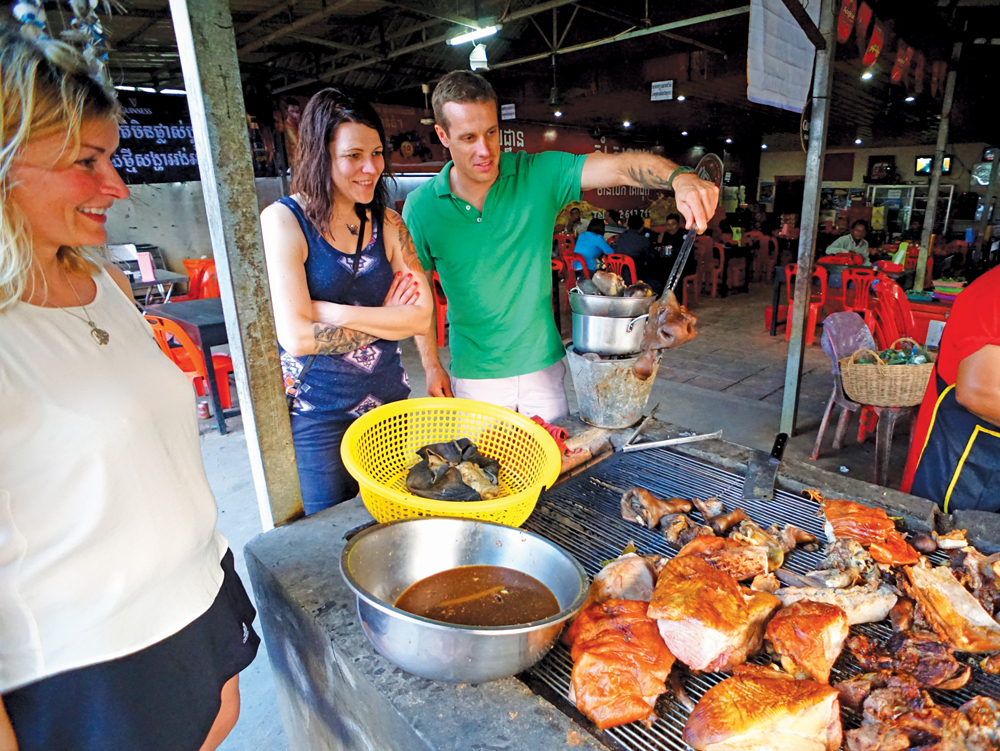 The rest of the four-hour-long tour includes a garden of local Cambodian produce, where we tried fresh peppers straight off the vine, skewers from smoky roadside barbecue stalls, a Khmer home-style lunch, and, of course, really good num banh chok, which is kind of like a mild version of assam laksa. Before we knew it, our time was up and Halcrow and the tuk-tuk driver dropped us off, stuffed and happy. There is good street food in Siem Reap. You just have to know where to find it.

Book a slot on siemreapfoodtours.com. USD75 (about $106) per person.