Depictions of food are common occurrences in much of modern Japanese literature, with some authors going into significant detail when describing specific dishes, restaurants or feelings experienced by characters over a meal. Although often fascinating in itself, such writing becomes that much more interesting if you actually know the places and tastes the author in question is talking about. Here, we pick out ten Tokyo restaurants that either inspired some of Japan's literary giants from the Meiji era onward, or actually appear in classic novels of the modern era. Guiding you onto the footsteps of literati like Natsume Soseki, Yasunari Kawabata and Yukio Mishima, our tour takes you from venerable yoshoku joints to a simple tempura eatery frequented by a young Haruki Murakami. 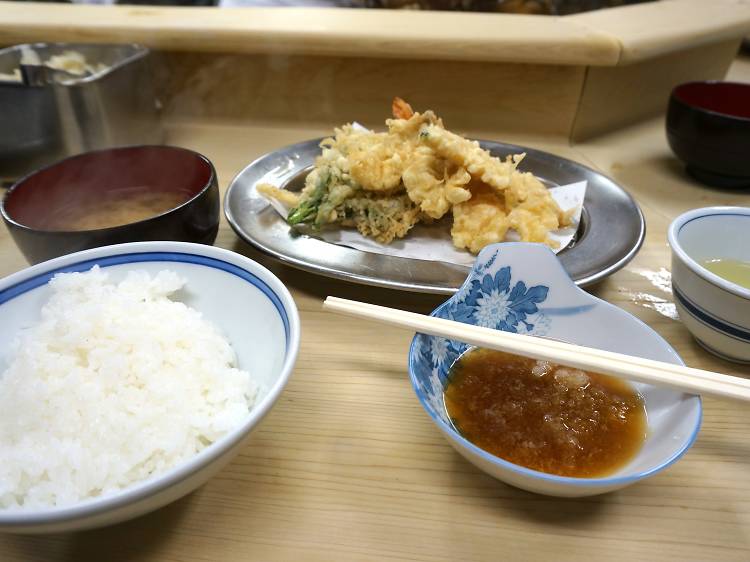 Long before Haruki Murakami become a million-selling author and perennial Nobel Prize contender, he worked a number of odd jobs while studying at Waseda, saving up in order to realise his dream of opening a jazz café. He also met his wife, Yoko, during this time, and the couple often headed over to this casual tempura joint in Jinbocho. Primarily a lunch spot, Imoya doesn't even allow à la carte orders during the day, but the set meals are satisfyingly sized and cheap – ¥650 for the tempura teishoku – making this place worth a visit even for Murakami non-believers. 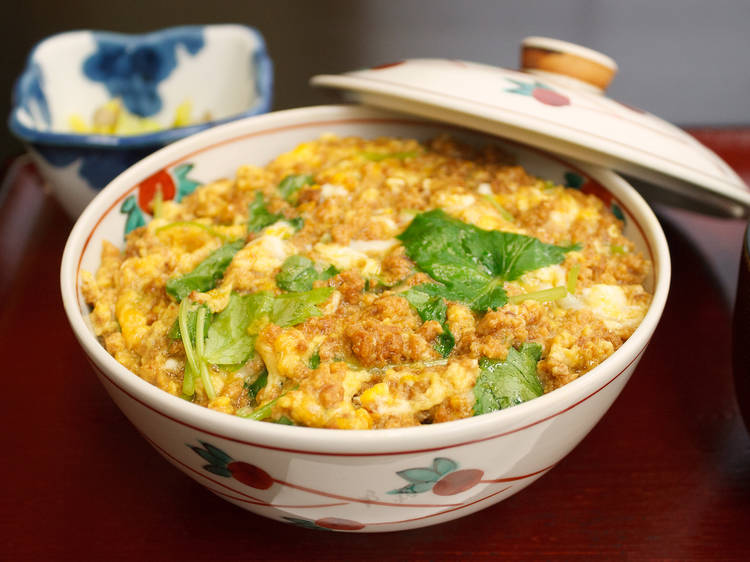 A traditional kappo (counter-style fine dining) joint specialising in chicken dishes, Shinbashi's Suegen traces its history back to 1909 and is infamous as the place where Yukio Mishima ate his last dinner before carrying out a miserably failed coup attempt at the Ichigaya SDF headquarters the following day – November 25, 1970. A regular at Suegen, Mishima's choice on that night was the shamo-nabe (gamecock hot pot), which is still available as part of the 'Wa' dinner course, a selection of up to nine dishes that starts from ¥8,640. Cheapos might want to head over at lunchtime, when the excellent oyakodon (chicken and egg over rice) set ('Kama Teishoku') can be had for ¥1,200. 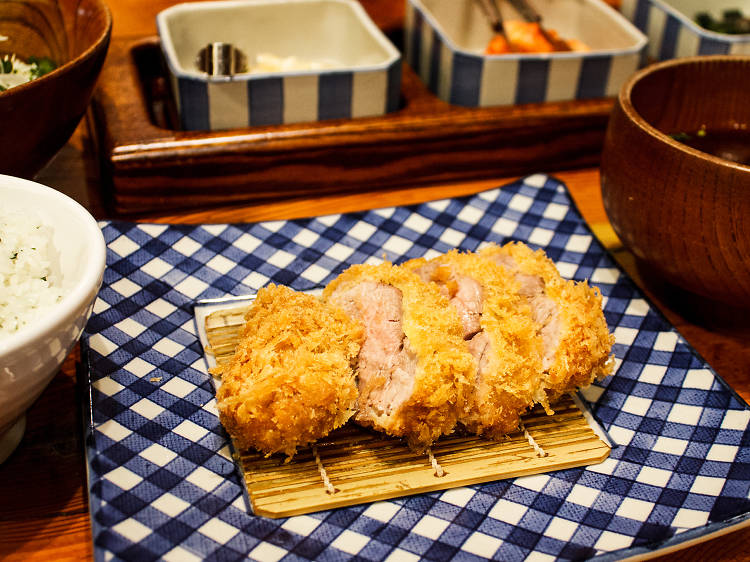 Another Mishima favourite, Katsukichi has remained largely the same since first opening its doors in 1962, with the heavy-set wooden interior, decorated with antiques and calligraphy scrolls, evoking memories of bygone days. Japan's first Nobel Prize-winning author, Yasunari Kawabata, was also a fan of the eatery's tonkatsu (pork cutlet), made with fine, freshly sourced meat and fried in corn and sesame oil for a light finish. The standard sets, which come with rice, soup and a small side, start from ¥2,400. 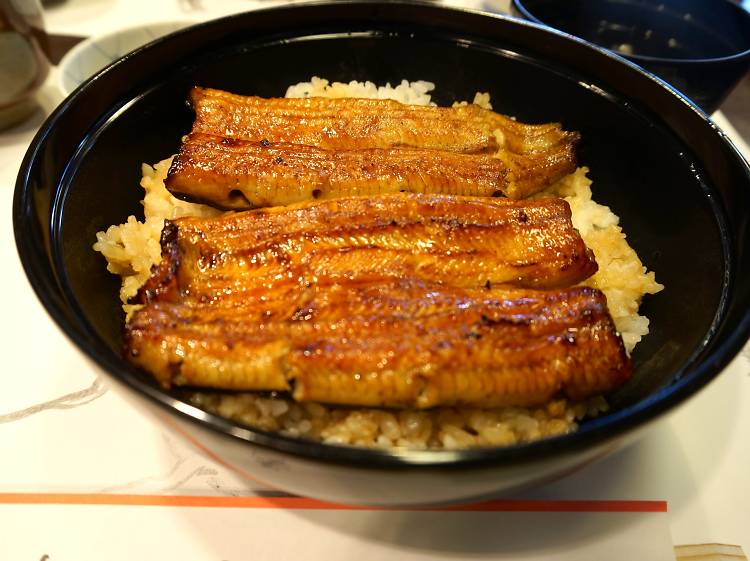 One of Ginza's finest old-school eel restaurants, Chikuyotei might no longer be as popular as it was back in the Meiji and Taisho eras, when the place earned mentions by an all-star cast of authors including Natsume Soseki, Kyoka Izumi and Fumiko Hayashi, in addition to playing a major role in Kafu Nagai's diary, 'Danchotei Nichijo'. Taisho poet Mokichi Saito was also a regular here – most likely due to Chikuyotei's classic unadon (eel over rice, ¥3,240) and its sweet, aromatic tare sauce that's been made according to the same recipe for well over a century. 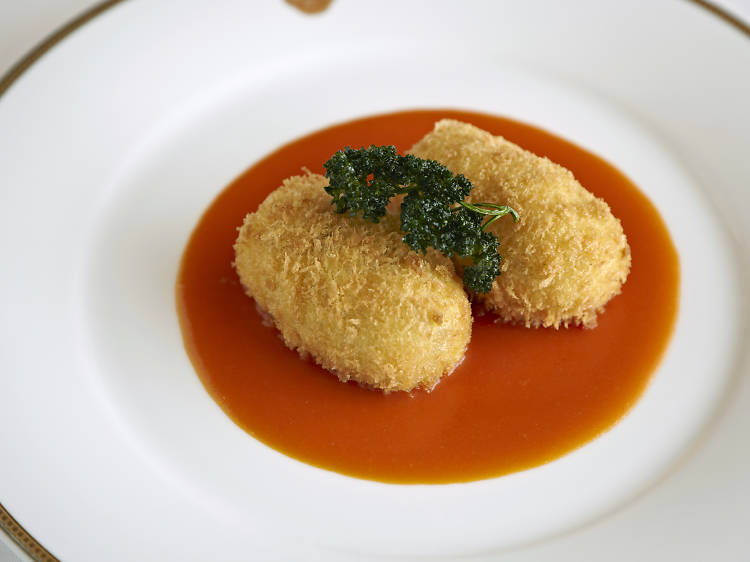 The pioneer of Western-style cuisine in Japan, the Shiseido Parlour has been frequented by dozens of accomplished writers over the years, with Kafu Nagai and Junichiro Tanizaki among those mesmerised by the curry rice and sodas on offer. Seventh-generation Edoite and shitamachi master Shotaro Ikenami praised the Parlour's meat croquettes and chicken rice as masterpieces in which 'the taste of pre-war Ginza' was preserved. We wouldn't know about that, but we'll take his word for it. 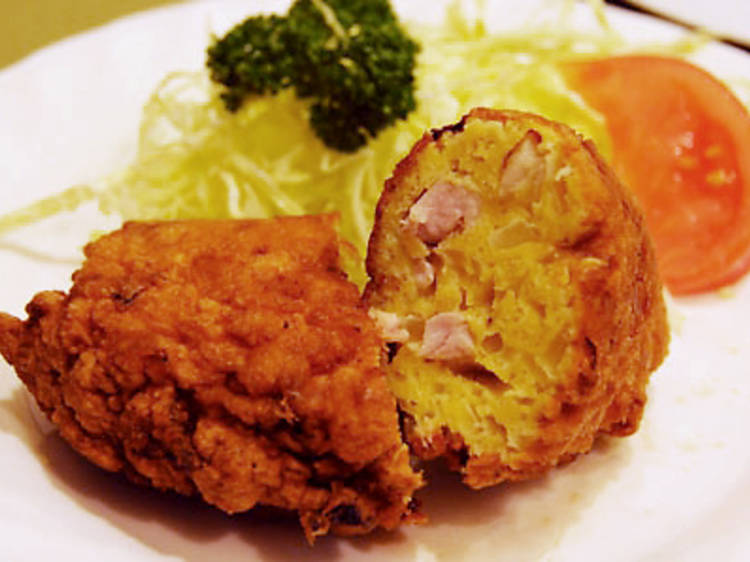 Now the most popular item on the menu at this old-school yoshoku eatery founded in 1907, the yofu kakiage ('Western-style' tempura made with mixed vegetables) was born as the result of a request by Natsume Soseki, author of classics like 'Kokoro' and 'I Am a Cat'. When visiting the home of Raphael von Koeber, his teacher in philosophy at Tokyo Imperial University, Soseki is said to have asked Koeber's personal chef to create 'something rare and easily made'. The chef, who later opened his own restaurant in Kanda, complied with this simple mixture of pork, onion, egg and flour. 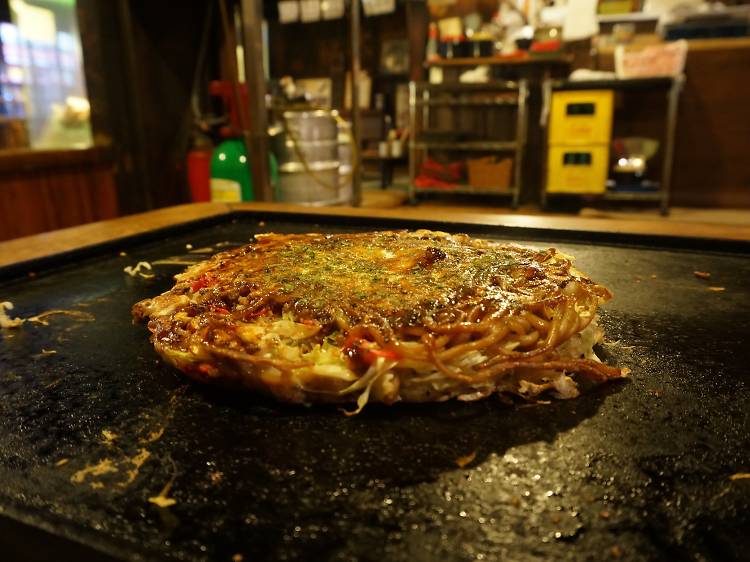 Offering comfort food in a funky wooden shack, within easy walking distance of Asakusa’s tourist sights, Sometaro pads its Showa cred with walls blackened by years of smoke damage, and paraphernalia related to the many literati who once crowded its rooms. Among these are mystery author Edogawa Ranpo, essayist Takeshi Kaiko and photographer Nobuyoshi Araki, while novelists Jun Takami and Ango Sakaguchi both mention the restaurant in their books. The intimate atmosphere around the okonomiyaki pan is wonderfully authentic. 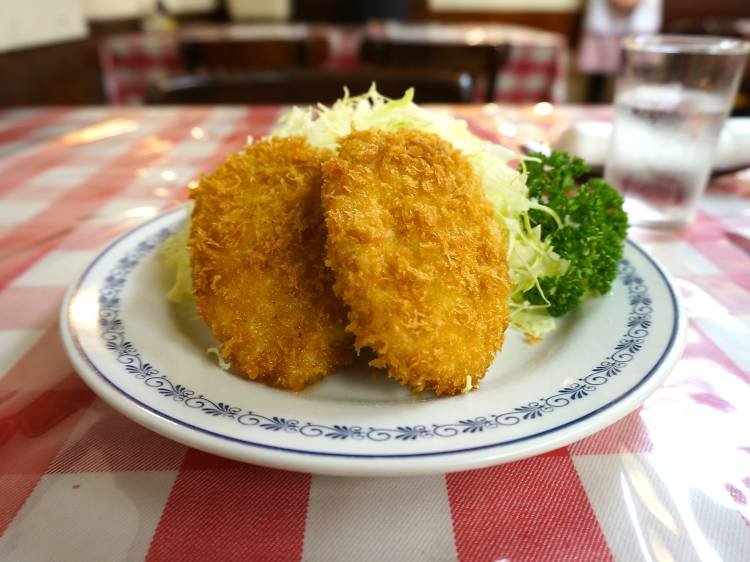 Novelist and psychiatrist Morio Kita's 'Doctor Mambo' series is one of the many works that mention Rengatei, believed to be one of the first restaurants in Japan to serve a Western-style menu. Kita's description of lunch here ('a small bottle of cold beer, a just-fried cutlet with shiny rice, and hot coffee') applies even today, as the cutlets (¥1,900) wow with their superb crispiness and the suds are chilled to perfection. 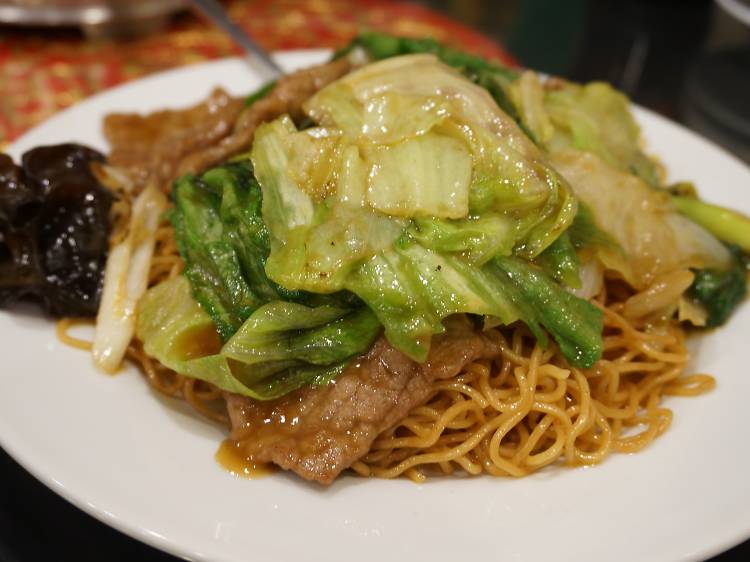 Still a popular lunch spot for salarymen in the Ginza-Yurakucho area, this old-school Chinese restaurant has certainly seen better days in terms of decor, but there's nothing wrong with the grub, which focuses on orthodox Cantonese offerings. Having counted Showa-era playboy novelist Junnosuke Yoshiyuki among its regulars, Keiraku oozes retro class. Try the signature fried rice served in soup, or go for Yoshiyuki's favourite, yakisoba (¥1,080) with lettuce, mushrooms and beef. 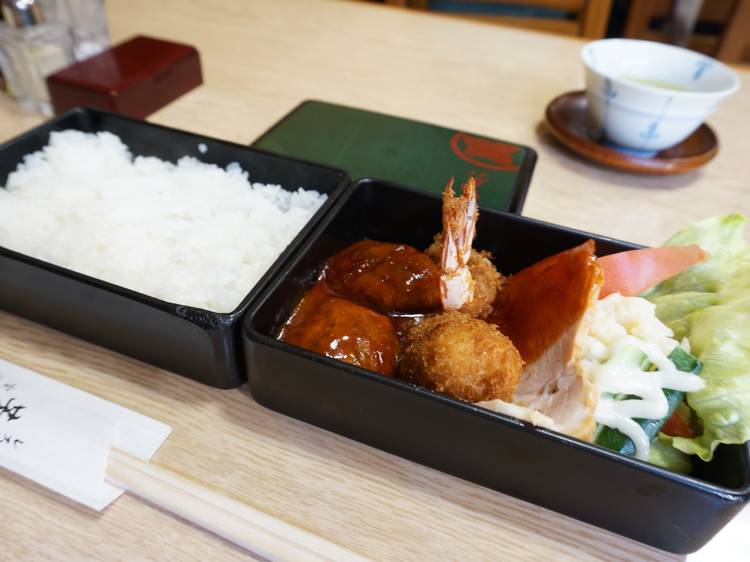 Decorated to resemble an upper-class early-Showa home, Houmitei has been in business since 1933 and, despite often being mistaken for a soba shop, serves an offbeat version of nostalgic yoshoku. Frequented by screenwriting great Kuniko Mukoda in the years before her tragic death in a plane crash in 1981, this Ningyocho classic offers delicacies like tongue stew, a flavourful concoction consisting of soft beef tongue cooked in demi-glace sauce until perfectly tender, and yoshoku bento (¥1,550), a sort of tasting selection of the restaurant's most popular dishes. 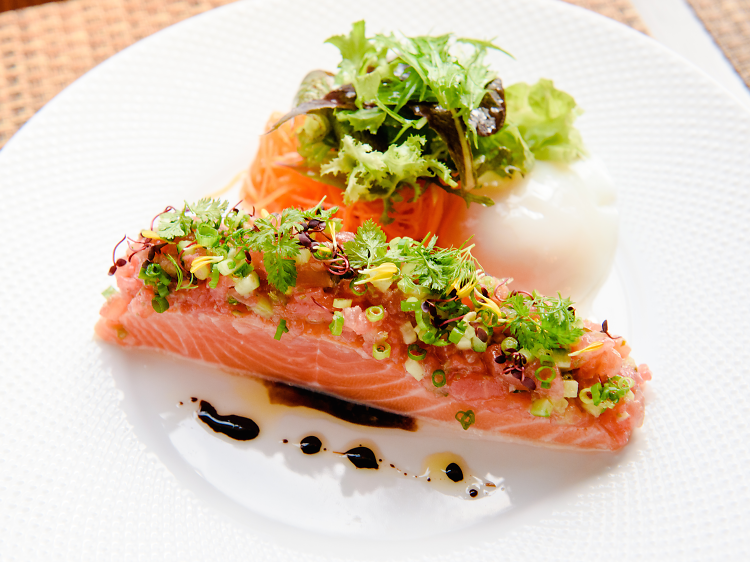 The 100 best restaurants in Tokyo 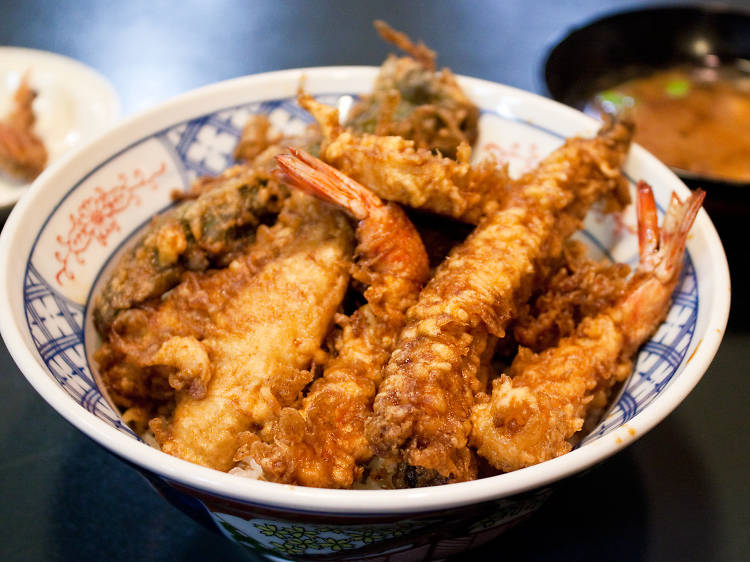 The best tempura in Tokyo: 15 bowls to try

Where to find the deep-fried delights diners crave