In this, the first in a Q&A series with artists living and working in Accra, we chat to filmmaker Sandra Krampelhuber about her documentary “Accra Power”.

In this, the first in a Q&A series with artists living and, or, working in Accra, we chat to Austrian social and cultural anthropologist and filmmaker Sandra Krampelhuber about her documentary “Accra Power”.

Accra Power features young Ghanaian artists Poetra Asantewa, Wanlov The Kubolor, Serge Attukwei Clottey, DJ Steloo, and others, sharing their varied perceptions of power. It also addresses the clashes between modern influences, such as technology and economic growth, and traditional belief systems, as well the current energy crisis in Ghana.

The film was shot during the Chale Wote Street Art Festival 2015, and screened at this year’s edition of the festival. I caught up with Sandra soon afterwards, and we chatted about the film and her experiences in Accra.

Please tell us a bit about your background.
I studied social and cultural anthropology in Vienna. That’s quite a while ago. This is actually my third film. The first film was about women in the Reggae and Dancehall culture in Jamaica, made in 2006. In 2014 I made my second film called “100% Dakar”, which screened last year at Chale Wote. It’s about the young creative arts scene in Dakar.

What was your motivation for shooting in Accra? And what was your motivation for using the characters you chose?
I’m very interested in urbanity in Africa, and mainly in West Africa. My last film was “100% Dakar” shot in Senegal, and was about the young thriving arts scene in the capital of Senegal. Then, I knew I had to choose another country or another city, because I would have loved to have done something else in Dakar, but to get funding it was wiser to choose another city, and I always wanted to come to Ghana or Accra.

Also, I knew some people here, which is also very important when you do something and you have to work quick. Because we did not have time to come here for research, and then another time to shoot, but we had to come, research, shoot, and finish it in three weeks. I knew Wanlov [the Kubolor] already from the FOKN Bois, and I knew Serge Attukwei Clottey personally. Serge introduced me to [DJ] Steloo, and then I did some research on the internet and found Poetra [Asantewaa], and I was very amazed by her work, and I contacted her via email, and I think Serge introduced me also.

We knew that we wanted a dancer in it, so Wanlov gave me some contacts, and that’s how we found Ester. We also knew we wanted an Ananse story in the film. That wasn’t easy to find! As we’re in Accra it was quite difficult to find someone who could tell an Ananse story, but we were lucky. At the screening of my film “100% Dakar” we met a young rapper, and by chance we said “We are looking for a grandmother who can tell an Ananse story. Do you know someone?” And he said, “Yes, my grandma.” So, that’s how we found the grandmother. The boxer came because we were shooting a lot in Jamestown, at the Chale Wote Festival, and it’s amazing how many boxing gyms there are here, and the history of the place with boxers and with the most famous boxers on the African continent coming from this area. So, I woke up one day and said to Andrea, my co-director, “Hey, we need a female boxer.” 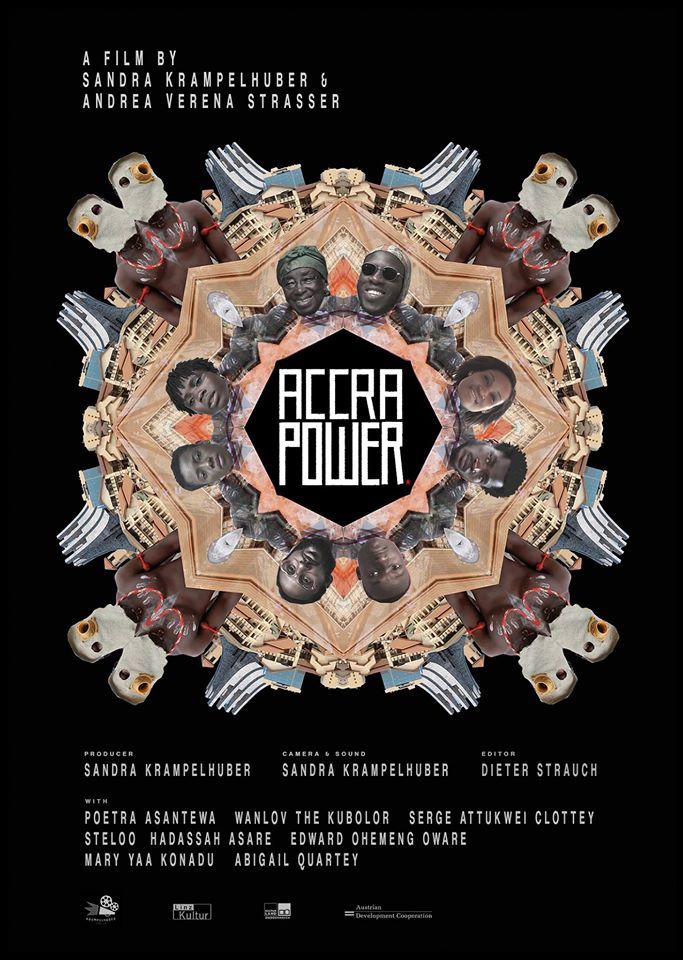 How did original documentary concept for Accra Power change once production started?
The original idea was to portray young Ghanaians, mainly artists, and show their impact on society with their art. But, when we came here we wanted to make the theme a bit broader, and we had a lot of inspiration.

Was the screening of “Accra Power” at Chale Wote 2016 the first screening here?
Yes. It was the first screening here, and I was so happy. You know, when you show a film you shot in a city or at a place, and you show it there the first time, you don’t know what’s going to happen. I was prepared for everything! I was even prepared for people shouting at me, “What have you done? What’s up with you!?” But I was lucky. I was very happy with how they reacted.

Something that struck me in the film is its humour. There was a lot of humour in the way things were shot, and in the shots that you chose as far as editing’s concerned. The audience here picked up on a lot of this, and found it very entertaining, but I’m curious as to how audiences elsewhere have reacted.
Well, they loved the Gospel Scientist. There’s great laughter always for him, and Wanlov. I’ve screened the film three times in Austria before screening it here. I hope other festivals will come now, but you know the audience [in Austria} is a bit more shy.

What was your experience, as a filmmaker, shooting in Accra from a technical point of view?
I was shooting myself because of small financing, so it was easy. The most difficult thing was that I am not a professional so that was a big challenge for me to shoot the film myself, and I was doing the sound. So that was the challenge. But, in Accra it was no problem.

What did you learn, or what surprised you when you were filming?
What was I surprised about? The huge creativity of course, and also the resilience of the people. How not to give up, to be creative, to work, despite all these problems with the electricity.

Did you find anything positive to take away about power crisis in Accra?
The notion of “vim” is very cool, and could be used in other parts of the world tojust support people to just do things no matter how hard it is.

So, now that you have shot here and shown your film here, will we see you back in Accra again?
I hope so. Dakar is my first love, but I like it a lot here. If I had the opportunity I would come back any time.

To find out more about Accra Power, and where it will be screened next, please visit the film’s Facebook page on www.facebook.com/AccraPower. You can also watch the trailer on Vimeo on www.vimeo.com/161636793.