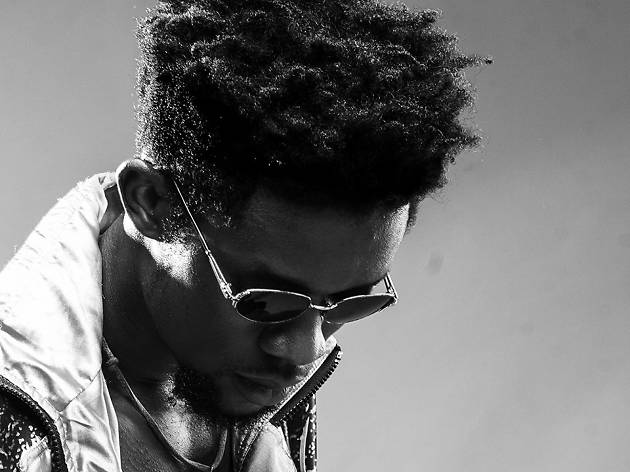 Read on for our guide to the week's coolest events and most interesting venues. If you manage to tick off all ten, head back to our home page for daily updates on the best restaurants, cultural events, nightlife, and whatever else Accra manages to think up before our next Hot List is published on Monday. 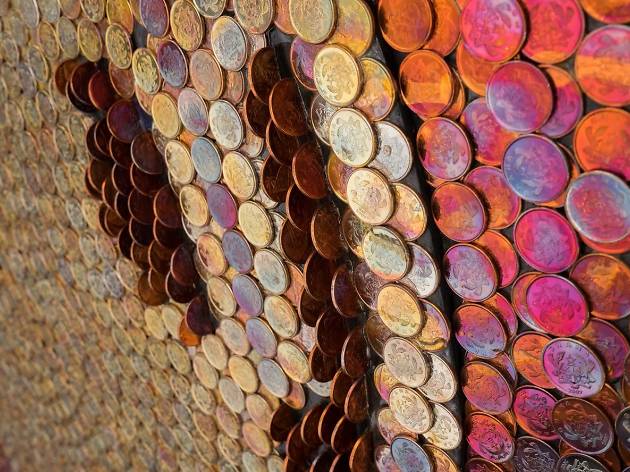 Q & A with the fascinating Yaw Owusu

Time Out: Your use of pesewa coins has become your artistic calling card of sorts. Were there any other materials that came as a close second? Yaw Owusu: At the beginning I mostly painted, but I have always been interested in the processes of transformation, and as such, started experimenting with reactions between other materials like aluminum and steel.   T O: The treatment the coins undergo to change colour is complex. Was it a period of trial and error to achieve your desired result, or did you sincerely have to learn some chemistry? Y.O: My encounter with these treatment outcomes was initially by chance – when some coins had contact with seawater during a project at the beach in Cape Coast. However, my little senior high school background in chemistry contributed enormously to the freedom to experiment with several elements and conditions, and I must admit I had no specific idea of what the reactions and activities could yield; I still don’t try to guess what might happen (even though some might be easily predictable). T O: How has Accra changed since you were a boy? Y.O: I grew up mostly in Kumasi as a kid, but I had the opportunity to see most of the other parts of the country. Accra, as the capital, always demonstrated the greatest change each time I revisited, due to the fact that most developmental projects and businesses’ head offices were centralised there. T O: To survive in Accra, one has to be somewhat savvy and entrepreneurial. What creative ideas have y 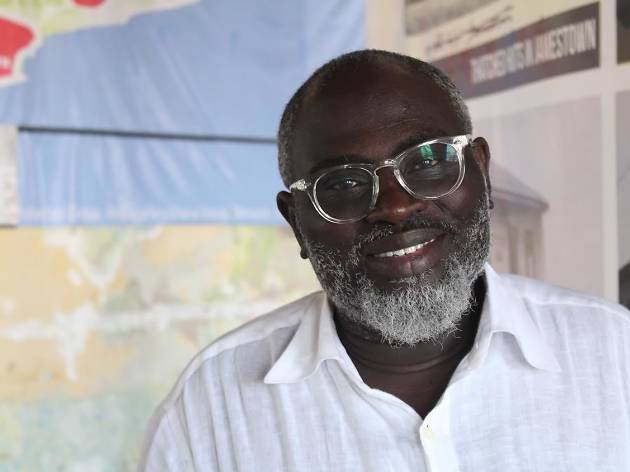 Past an A-Board that reads ‘Accra Redefined’ and up the wooden stairs of an old, somewhat ramshackle 1915 building in Usshertown, two buildings down from the Fort, is a space that is quietly changing lives. At the top of the stairs, the cooling breeze blows through the many wide open windows around the one-roomed gallery. Through the rear window, the Gulf of Guinea, blue and sparkling, darkens to azure on the horizon. Fishing boats bob in the water, a reminder of the industry that still powers the oldest part of Accra. Inside, an exhibition researched by historian Nat Amarteifio, charts the 450-year history of Jamestown: the slave forts, the heady late 1800s alive with department stores and music clubs, the decline of the area starting in the 1920s as the port moved east, the war, independence, and the challenges of 21st century West Africa… it’s a compelling story and one lived out by the residents today in Jamestown.  So what exactly is ArchiAfrika Design & Architecture Gallery? Its genesis was a dream, a philosophy, an idea of how design and architecture, if intelligently implemented, can make a real and lasting impression on the world, on a city, on a neighbourhood. Its chief patron and the driving force is architect Joe Addo who has worked across the world, including a 16-year spell in Los Angeles.  “I got involved with the advocacy of architecture; how we use architecture to get involved with the local community. There was very little discourse about this and I wanted 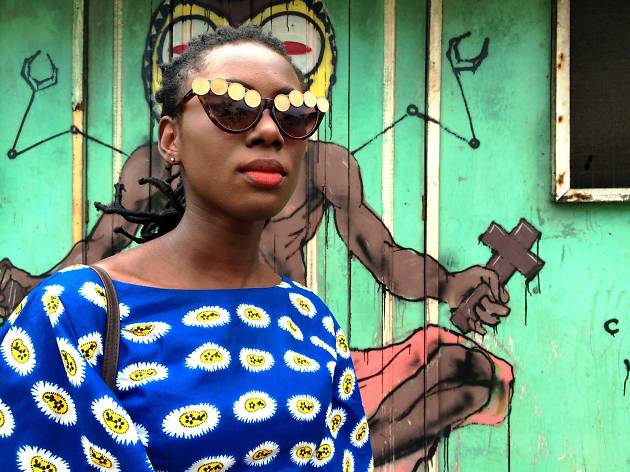 Ama Asantewa Diaka is the CEO of fashion brand, Alikoto Clothing, and greeting card company, Yobbings. She also heads up Love Rock, an NGO aiming to assist youth in becoming active members of their communities. However, it’s her spoken word poetry she’s most well known for. Going by the stage name Poetra Asantewa, she has performed at numerous national and international events in Accra, and is featured in Sandra Krampelhuber’s film “Accra Power”, which was screened at this year’s Chale Wote Street Art Festival.   Tash Morgan-Etty caught up with Poetra after the screening to find out more about her thoughts on the film, and how Accra influences her work. You were featured in “Accra Power” where the filmmaker used you as one of the film’s narrators. How did you get involved, and how do you feel about the outcome of the film? When Sandra came to Ghana last year she approached me and showed me her work “100% Dakar”, which documents artists in Dakar and their work. She said that when she got here she thought it would be a good idea to have a theme like “power” or “Dumsor”, and that was a strange coincidence because the theme for our performance last year was “power”. So, it kind of fused perfectly with what she wanted to do. I asked her about the artists in the film, because I wanted to be sure there was going to be a gender balance in the film. She said that there was a boxer, a dancer, etc. I was quite pleased that. And, so, we did a couple of shoots. I saw the final product 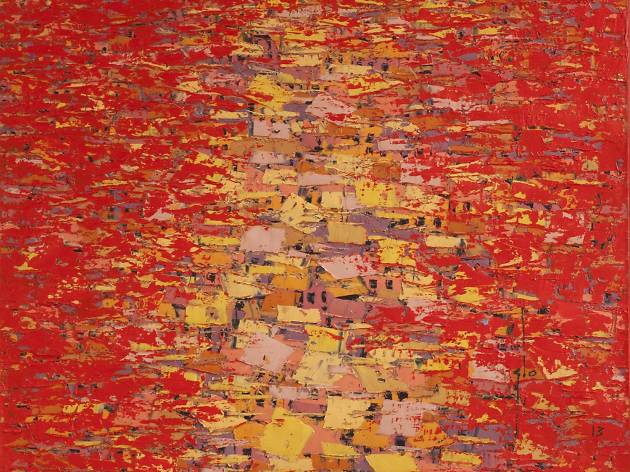 Is now the perfect time to invest in Ghanaian art? 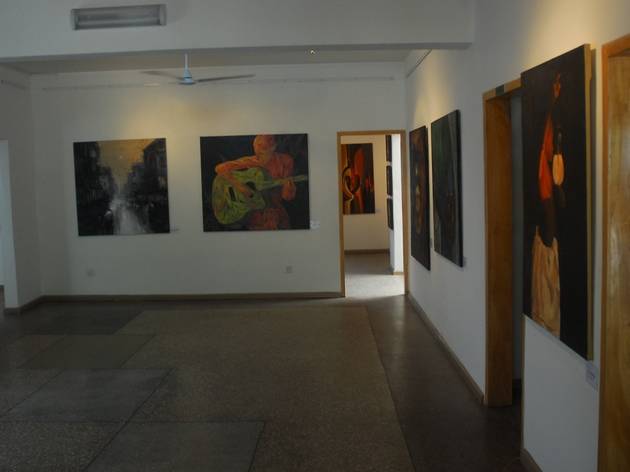 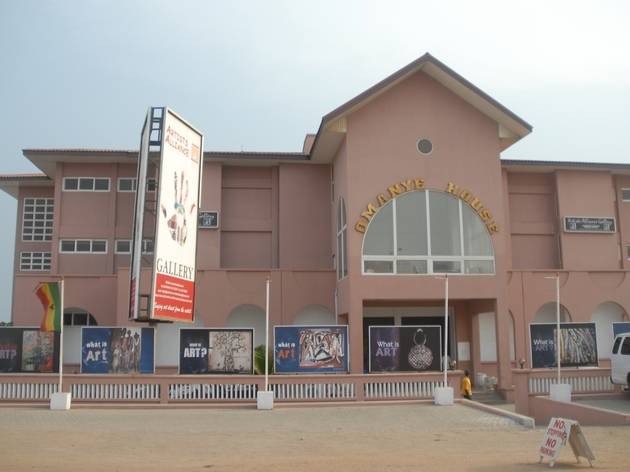 This three-storey gallery is home to a large array of Ghanaian artists and sculptors such as Augustine Gokah, Betty Acquah, Nii T Mills, Ebenezer Borlabie, Kofi Setorji and Gabriel Eklou. Ablade Glover (see interveiw on page 4), one of Ghana’s most respected artists, conceived the Artists Alliance Gallery in the 1960s. He saw the need for a showcase for fine arts in Ghana to act as a driving force to gain recognition around the world. There are not only contemporary arts, but also collectors’ pieces: beautiful, fragile Asafo flags with appliquéd and embroidered symbols, and ancient strip-woven kente cloths. It sells art directly from the artist. 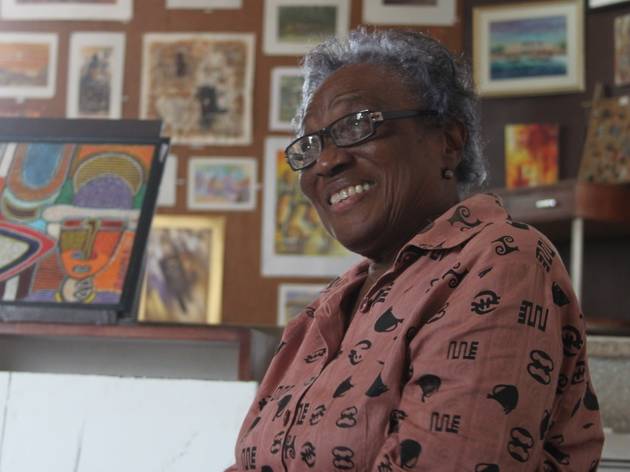 Loom’s Frances Ademola has a popular gallery that exhibits paintings and sculptures by a good selection of Ghana’s foremost artists, with a smattering of expressive Nigerian pieces. The modest space has been here since 1969, and is bursting at the seams with the work of nearly 100 artists. If Ademola is around, she’s delightful company, chatting exuberantly about artists such as Seth and Serge Clottey and Gabriel Eklou, and happily offering her great knowledge of the Ghanaian art scene, past and present. Loom is regarded as one of Ghana’s premier galleries. 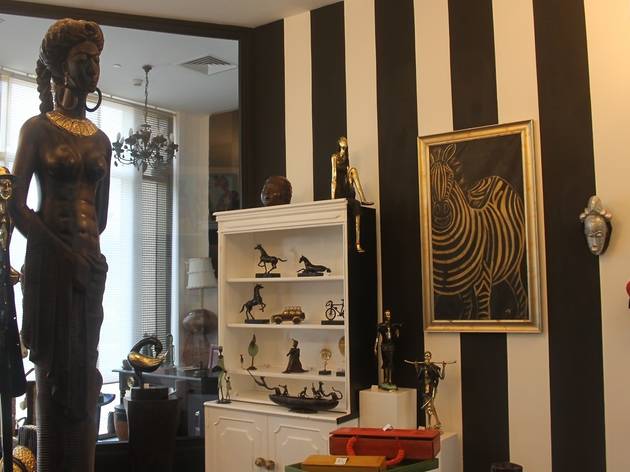 This luxury art boutique set up by Kukua Ampah has recently opened a branch at the new Mövenpick Ambassador Hotel. Many of the elegant and creative pieces here are bespoke and adapted by Kukua. Modern works of art incorporating the rich cultural influences of West Africa are created, customised and commissioned by Kukua’s clients. A key range is the elegant metal flowing sculptures, partly polished, partly left to gather the natural colours of metal. Beautiful. This is the place for the classiest souvenir. Other location Labadi Beach Hotel. Open 8.30am-9pm Mon, Tue, Thur, Fri; 10am-8pm Wed; 8.30am-7pm Sat; noon-6pm Sun (0204 311 126). 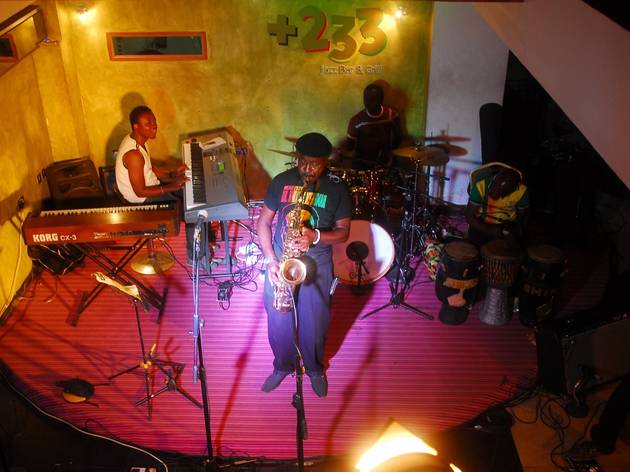 From highlife to hiplife

Accra is one of Africa's leading musical cities - and the spiritual home of a style that's been taking over the world in recent years: African highlife 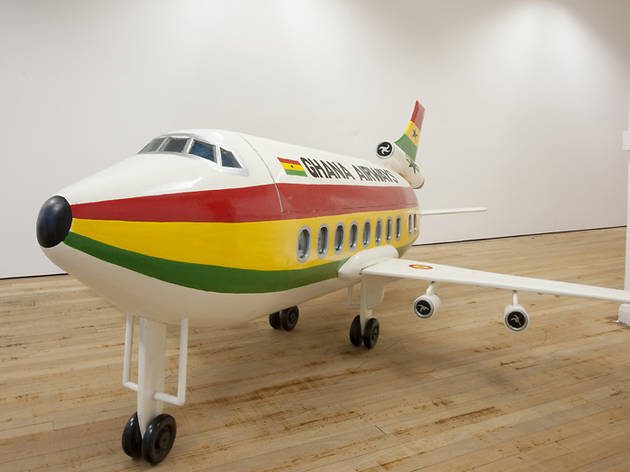 From colourful caskets to classic watercolours 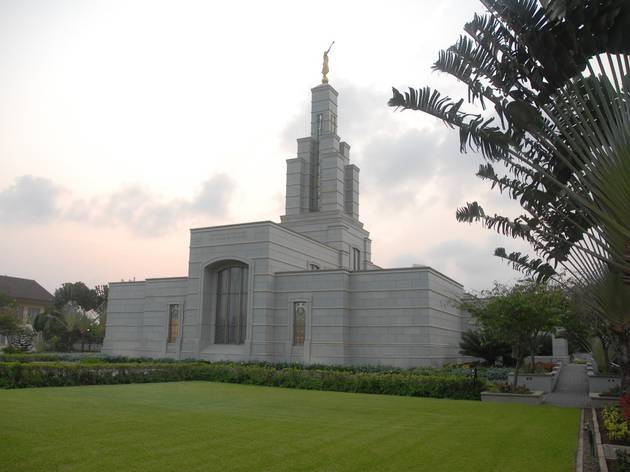 Accra's architecture: the good, the bad and the downright strange 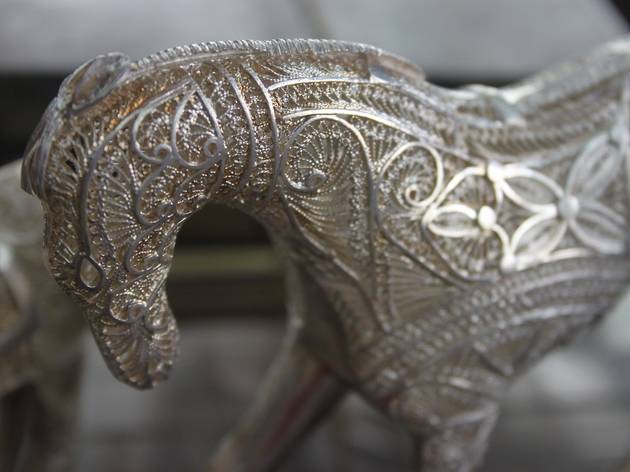 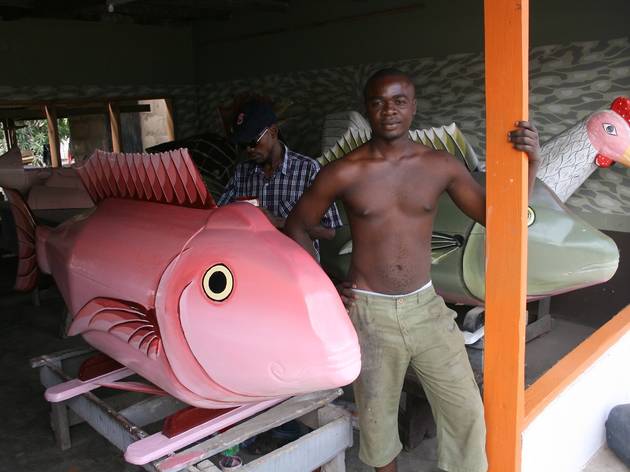 The art of death 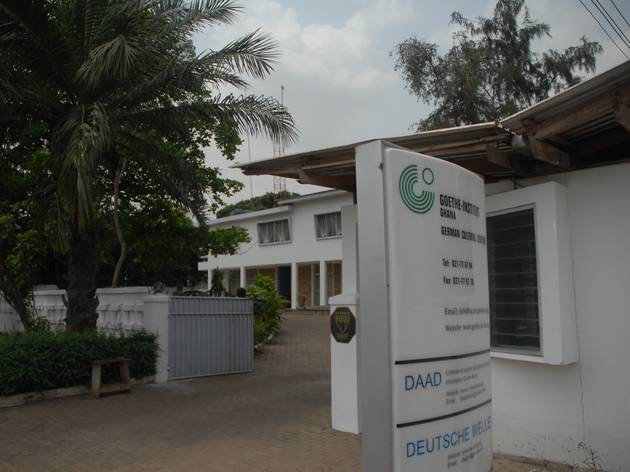 The Goethe-Institut is the German cultural centre and celebrates 50 years of being in Ghana. It has an impressive array of events and art exhibitions. Links between German art and that of Ghana are given precedence, whether through sound installations, mixed media pieces, performance art, photography or painting. It also occasionally lends its venue to the National Film and Television Institute next door. Be sure to check the website or pick up a programme of events when you are in town. 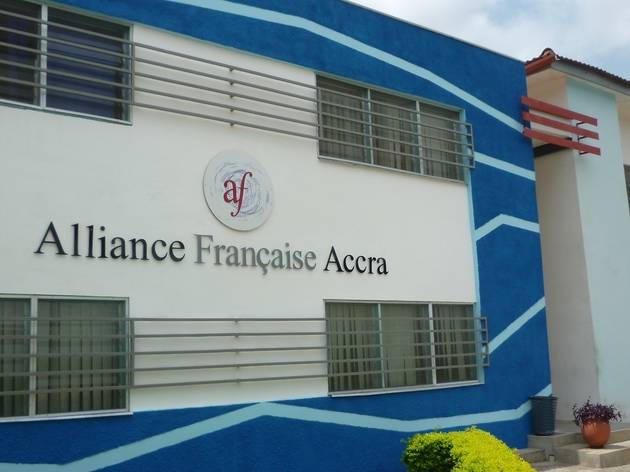 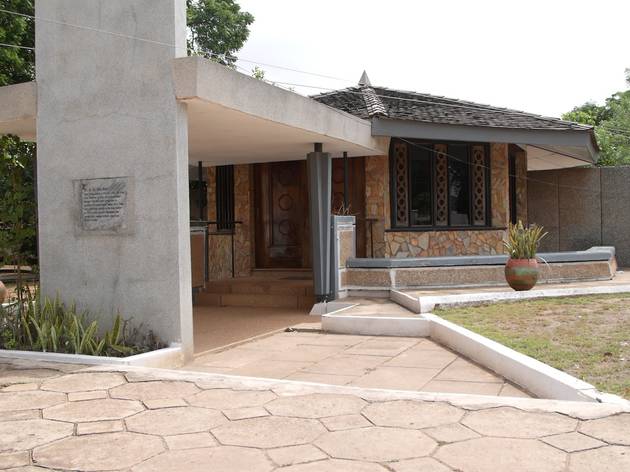 William Edward Burghardt Du Bois was an African-American civil rights activist who became a citizen of Ghana in the 1960s. He was known as the ‘Father of Pan-Africanism’. The centre, where he and his wife once lived, and where they are now buried, houses his personal library, a small museum with a handful of personal effects such as his graduation robes. The couple’s mausoleum is surrounded by Asante stools, a seminar room, a restaurant, a gallery, an amphitheatre and a research centre for Pan-African history and culture.

See more attractions in Accra
Get us in your inbox