Yellow is the Colour of Water opening review

As Jeremiah Quarshie’s Yellow is the Colour of Water opens at Gallery 1957, Tash Morgan-Etty attends the launch and talks to the artist

I’m no art aficionado, “But who needs to be to rub shoulders with the who’s who and have a glass or three of champers, while perusing some pretty pictures?” I thought. So, off we went (my long neglected clutch bag and I) to the opening of Jeremiah Quarshie’s Yellow is the Colour of Water exhibition hosted by Gallery 1957, jewel of Accra’s latest and swankiest lodging, the Kempinski Gold Coast Hotel.

Make no mistake, the well-heeled were there, but thankfully diluted by the city’s hip creatives and intellectuals, international visitors, and more ordinary folk like yours truly. This formed a delightfully cosmopolitan crowd who all appeared to relish exploring Quarshie’s hyper real and detailed portraits hung in among a construction site on the Kempinski property. What greater compliment could any artist ask for than for such a wide range of people to all be enjoying his work at once?

Too late for the booze (or perhaps too early?), I grabbed a cold glass of cranberry instead, and made my way to one end of the exhibition. The stark surrounds and scale of the site’s concrete walls achieved a dramatic, but muted, backdrop for the artworks. It didn’t take long to notice a significant shift in the demeanour of the artist’s subjects over time. “Gifte” from Yellow is the Colour of Water I, completed in 2013, is slumped, demoralised and exhausted, across a wheel barrow carrying two yellow “Kufour” gallons. These recycled cooking oil containers are often used in Ghana, and across West Africa, to fetch and store water, and it looked as if Gifte had been doing a lot of fetching and caring that day. Fast-forward to 2016, and female boxer “Franklina” couldn’t be more different. Powerful, obstinate, and indifferent, Franklina challenges us as she sits, proud and comfortable, upon her throne of gallons. 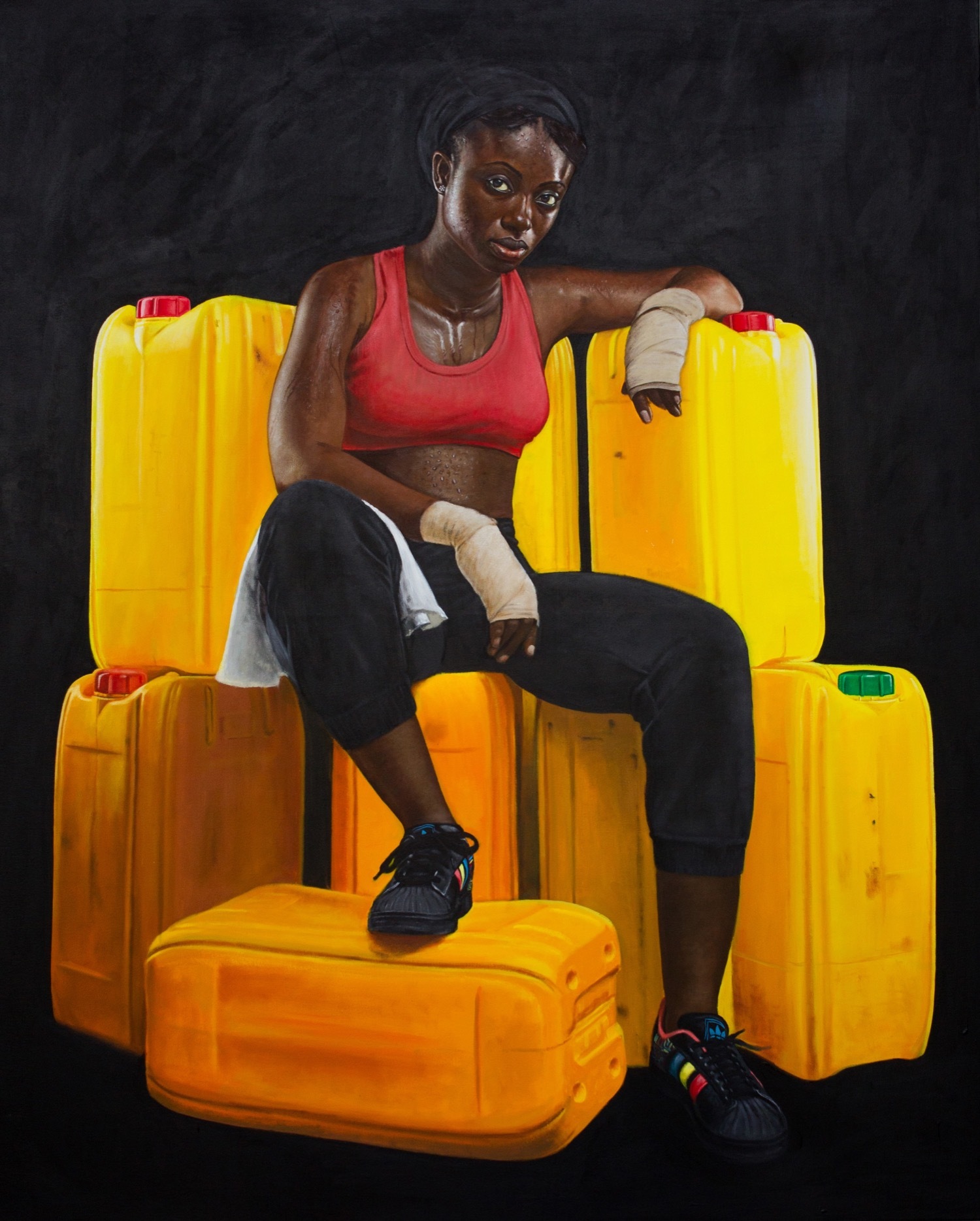 Shrieks of laughter and excited giggles from the next display area caught my attention, and I couldn’t help but wonder over to see what all the fuss was about. There stood one of Quarshie’s subjects, Obiribea, glammed up and neatly dressed in a colourful tailored dress, having her photo taken with her portrait by a number of attendees; no doubt an amusing contrast as Quarshie had painted her (no less impressively than Franklina) wearing a high-vis vest and construction workers’ helmet. “Have you seen the artist?” I asked as Obiribea smiled at me.  “Yes,” she replied, enthusiastically pointing him out in the crowd. “He’s the young guy in the black outfit.”

Young he is, and that’s a comment I heard repeatedly all night. Many were surprised to see such maturity and detail in paintings by an artist in his early thirties. However, it seems Quarshie thrives off this contradiction, among others.

As the buzz of the exhibition began to die down, and the crowds dissipated, I managed to catch a quiet moment with him, and asked how he’d gone about choosing his subjects. Jeremiah explained, “I’ve always wanted to present diverse people, people from all walks of life. The whole thing affects everybody; the search for water and its storage in different forms. Even rich people want to store water if there is a water shortage. So, I think in a way the gallons implicate everybody, and that’s why I decided to use people with varied backgrounds. Most of them are people are people I know. Some of them are people I’ve come to know.”

Explaining the contrast I’d noticed between Gifte, Franklina and others, I wondered how his style had developed across the collection. “I was interested in the gallons only initially as a receptacle for carrying water and seeing it only as a problem,” Quarshie said. “But, as I progressed with my research I realised that [the gallon] embodies a lot of contradictions. It is important for me to put those contradictions in my work by adopting things like Old Masters Dutch style paintings, where people sit in a particular form: regal, because these are usually paintings of bourgeois or royals.”

Quarshie was born in Accra, and later studied in Kumasi. So, I asked if Accra had any influence on his work. “I always say it’s a beautiful mess here,” he laughed. “It’s beautiful, it’s messy, but we love it! Accra is the place to be. I hate it and love it at the same time. It’s very interesting, and it’s enough to inspire me to do a series like these,” he said gesturing to his works. 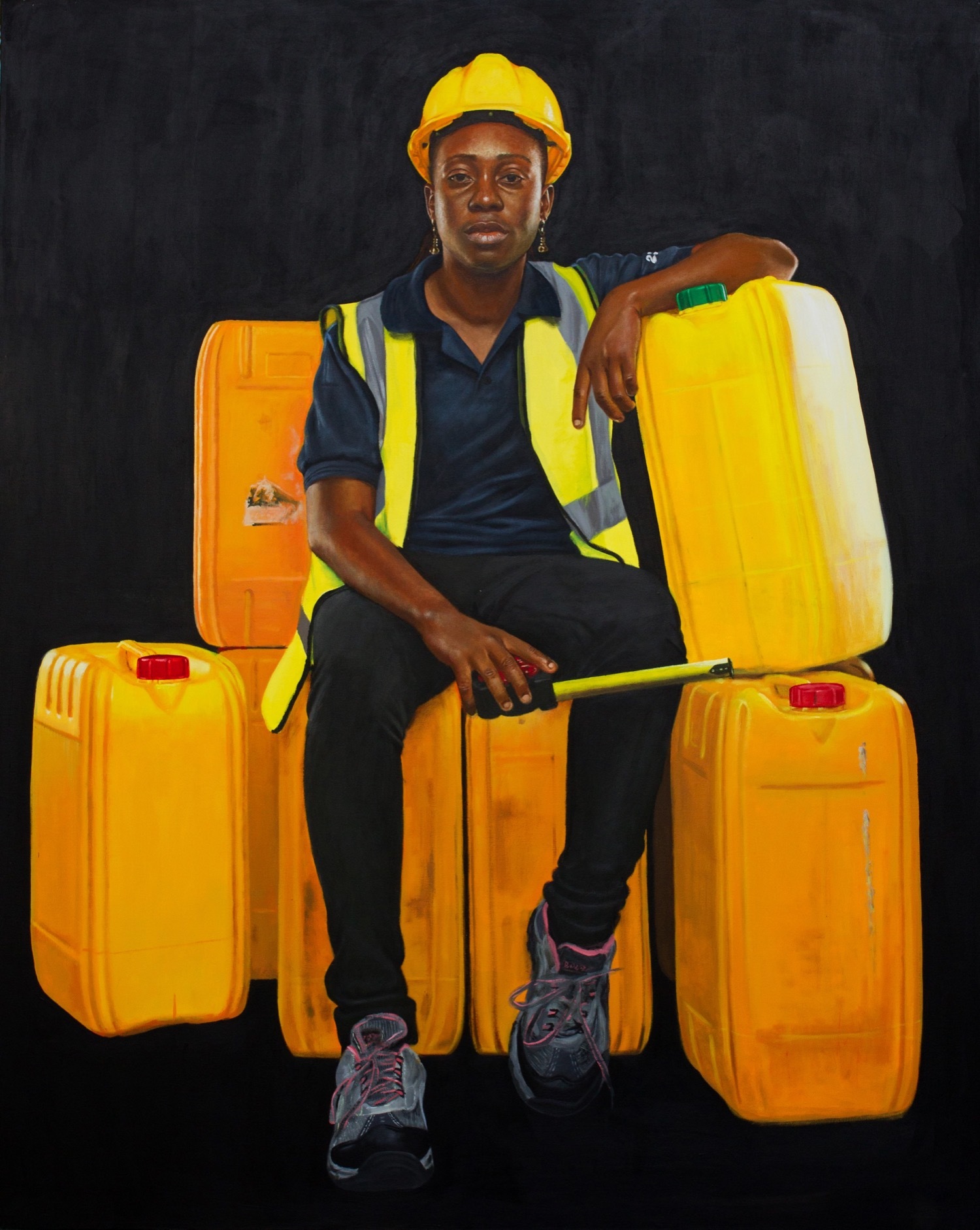 “I’m already interested in contradictions, and I think the most contradictions are in Accra. You find the high rise buildings in Accra, and you find shanty towns in Accra. You find the best of cars in Accra, and you find the worst of roads in Accra. So, you find these very sharp contrasts in every angle of the city, and it’s quite inspirational. And, of course, when I go to Labadi [beach] and I see a huge pile of these gallons, it just strikes me. That’s what made me want to look into it more; to present a series and title it “Yellow is the Colour of Water”.”

“Of course,” he hinted with a smile, “I might look for cities similar to this to produce my next body of works from. So, we’ll keep that locked and see how it turns out.” We certainly hope you do Jeremiah. We’ll be waiting.

Until then, catch Yellow is the Colour of Water on until October 22, 2016. It’s a multi-site exhibition project staged across various locations in Accra, including Tema Station and Kotoka International Airport, but is based at Gallery 1957, Kempinski Gold Coast City Hotel. See www.gallery1957.com for further details.