August 2016 saw the Chale Wote Street Art Festival’s sixth edition, which was by far its biggest and best yet. Words & images: Tash Morgan-Etty

August 2016 saw the Chale Wote Street Art Festival’s sixth edition, which was by far its biggest and best yet. The theme for this year was “Spirit Robot”, which the festival organisers, Accra[dot]Alt, hoped would encourage “the energetic ability of festival participants to create a new encounter with reality that is entirely of our choosing and construction.” This was indisputably and wonderfully achieved through the multitude of opportunities created by Chale Wote 2016 for interactions between festival attendees and artists. 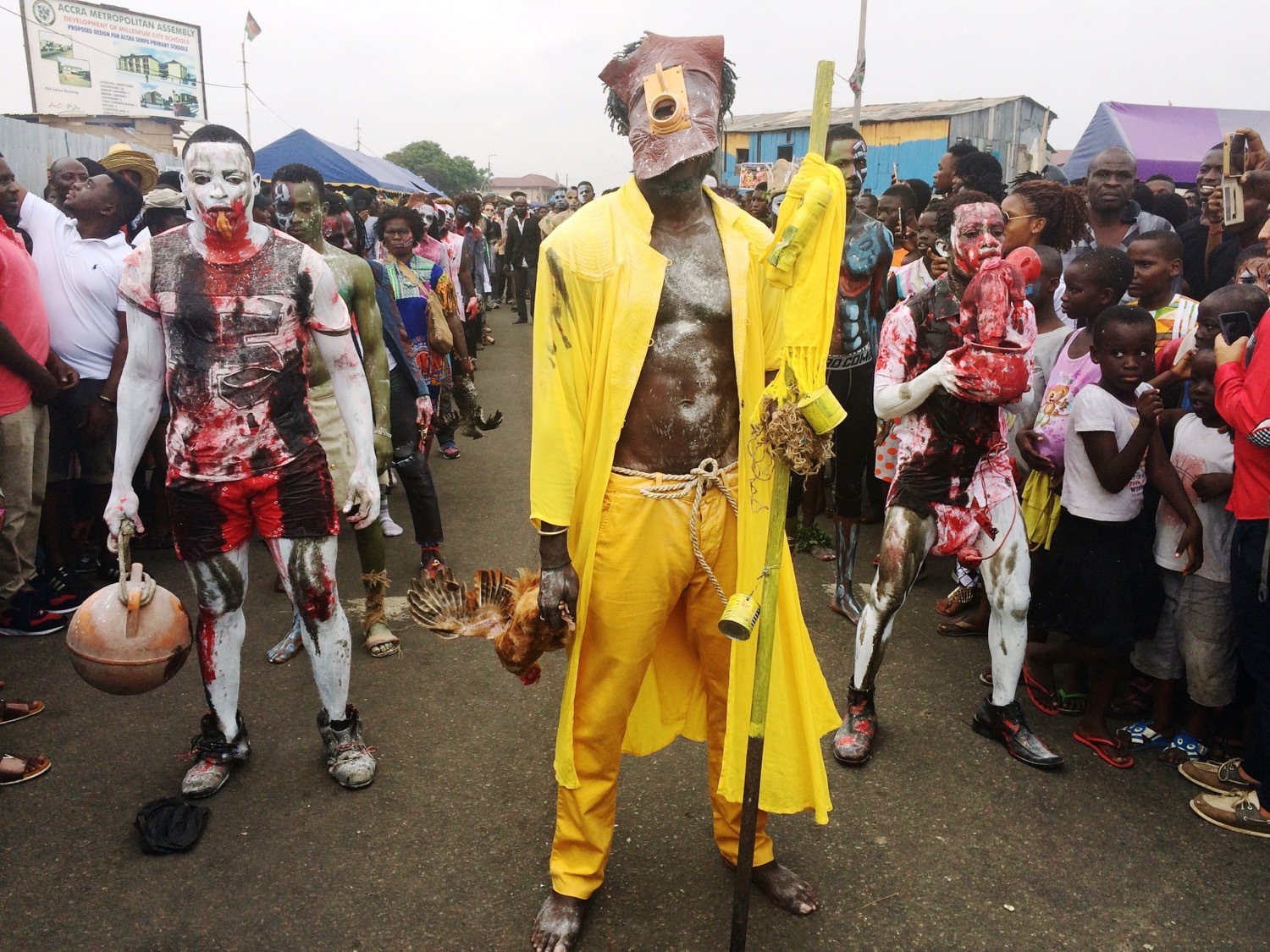 The Monday through to Friday were filled by The Open Gallery and Labs; a series of fascinating and inspiring exhibitions, film screenings, talks, performances and conversations, by numerous celebrated and up-and-coming local and international contributors, held at several attractive venues around Accra. These gathered momentum through the week, and fuelled the weekend’s colourful crescendo on the streets of Jamestown. The most consistent and notable presence at the weekday events, for me, were the groups of Ashesi University students, who enthusiastically absorbed everything they saw and heard, and fired carefully considered questions at the panellists of the various discussions, while effortlessly maintaining their too cool for school demeanour… I look forward to seeing what these dialogues will inspire them to do and create in the future. Unfortunately, I only made it to three of the weekday events, but I thoroughly enjoyed them, and will definitely be making an effort to attend more next year.

The main street art elements of the festival take place in the Jamestown district of Accra on the weekend. One of this year’s many international visitors, Sofja Giljova from Estonia, told me, “I really like that it’s in town itself. It’s nice to walk around and not be in this bubble of the festival, but actually explore the neighbourhood.” Exploring the numerous art installations; music, dance, theatre and street performances; street paintings; food stands; and fashion and décor stalls, spread among the streets, alley ways, and inside the historical buildings of Jamestown, certainly makes the Chale Wote weekend the most well-known and well-loved part of the festival. 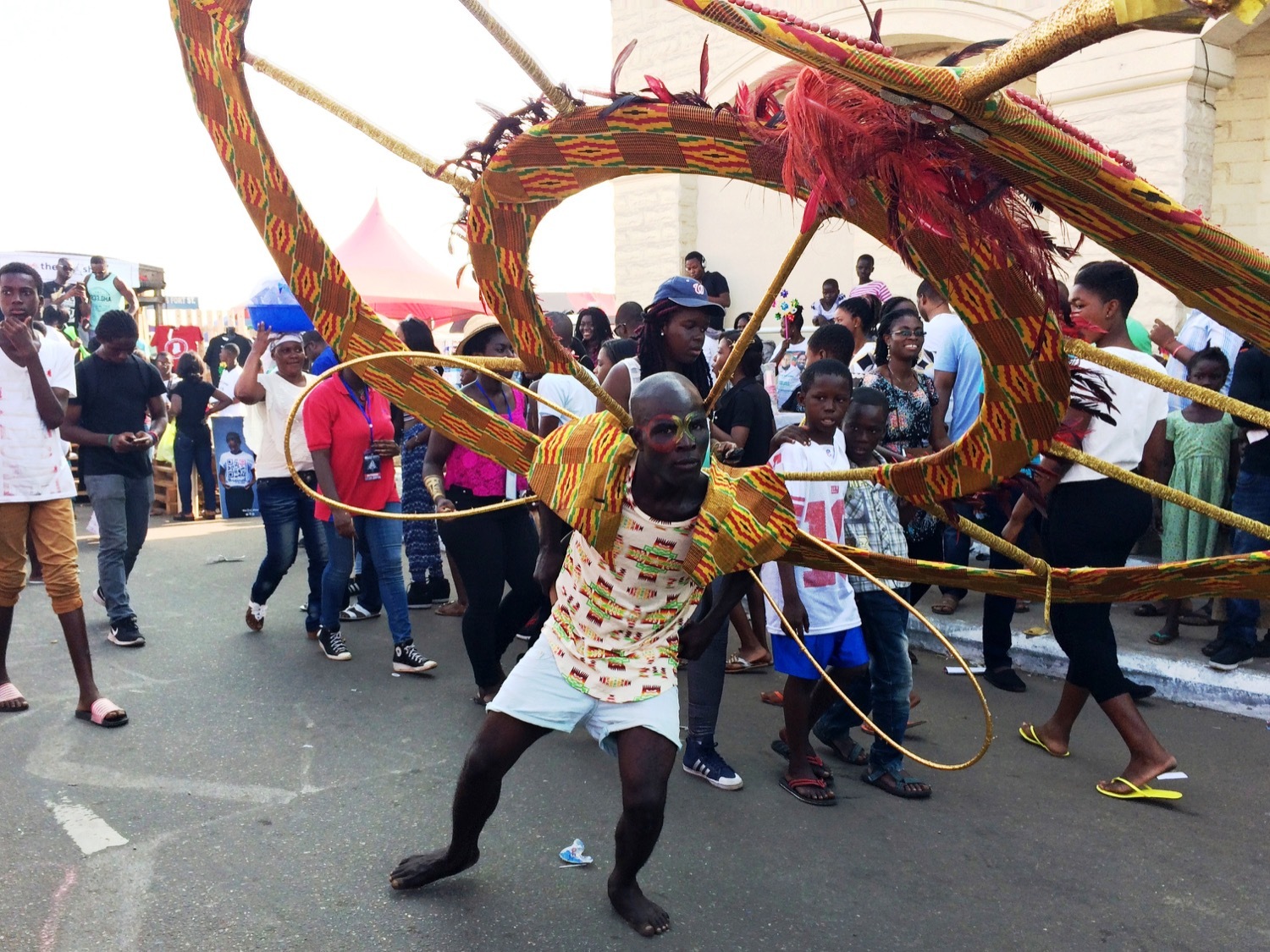 German visitor, Nicha Von Carnap, felt that the weekend offered, “… a great atmosphere. It’s really chaotic as well. You happen to bump into an amazing performance and then half an hour later there’s just nothing there anymore, and there are so many children playing around you. That brings a nice atmosphere. It’s more like being in a really open neighbourhood than in an upper class arts festival. It feels real, and I like the diversity of it.”

I headed down to Jamestown around midday on both days, and left in the late afternoon, just as the throngs of festival revellers started getting a little too big and pushy (albeit in an enthusiastic and friendly way) for comfort. A friend who’d arrived as I was leaving on the Saturday mentioned later that being there in the evening had been quite unpleasant as there was very little lighting after dark, and navigating the huge crowds became next to impossible. So, my first tip is: Get there early!

The second is to read through the festival brochure online before you go. There are so many wonderful things to see, hear, buy, and eat, that it’s unlikely you’ll be able to get through it all. So, it’s best to cherry pick a few things from the program that strike your interest and aim for those. The map of Jamestown (available in the brochure) is also very useful for orientating yourself when you arrive. This year there were large billboard sized place markers in key areas on the festival route, which were a great help in, not only locating the various stages and venues, but they also made easy meeting points for friends and families. So, in general, the festival was better organised than in previous years, and although not everything ran on time (very little does in Ghana), it all flowed together well and was a lot easier to navigate. 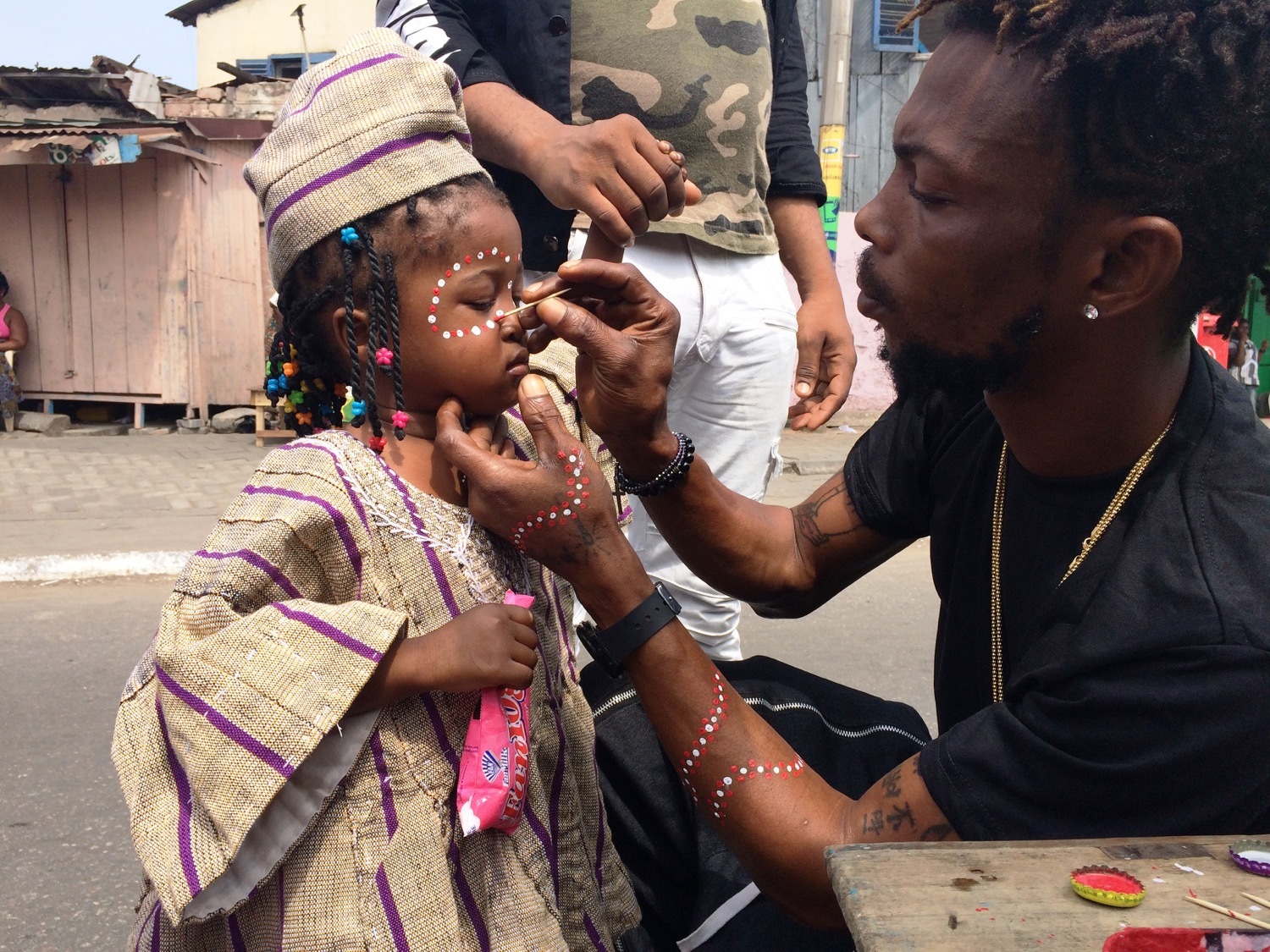 There seemed to be a lot more involvement by the Jamestown community in this year’s Chale Wote, and I found them even more welcoming and enthusiastic towards festival goers than in previous years. The local children in particular were very obviously enjoying the experience. Some of the kids even took it upon themselves to protect and take care of artworks displayed on the streets, and others created their own.  “It’s a place where people feel really free, which I think is nice in general, but particularly here [in Ghana],” says Susan Wilcox, a returning visitor from the USA. “What captures that for me is watching these little kids grab the last dregs of paint from a bottle, and they were just doing their own thing on the ground. So, I think it’s very inspirational. People get to showcase who they are, they get to experiment, and play.”

Evi Olde Rikkert of the Netherlands added, “Compared to when I read about the festival online before I came, one of the things that strikes me the most is that there are so many children, and that they are kind of extending the exhibitions to the roads, for example drawing on the roads. They are having fun, because in Jamestown they don’t have much space, so with the roads cleared [for the festival] they are enjoying the space. They are so involved, and they get extremely inspired by it.” 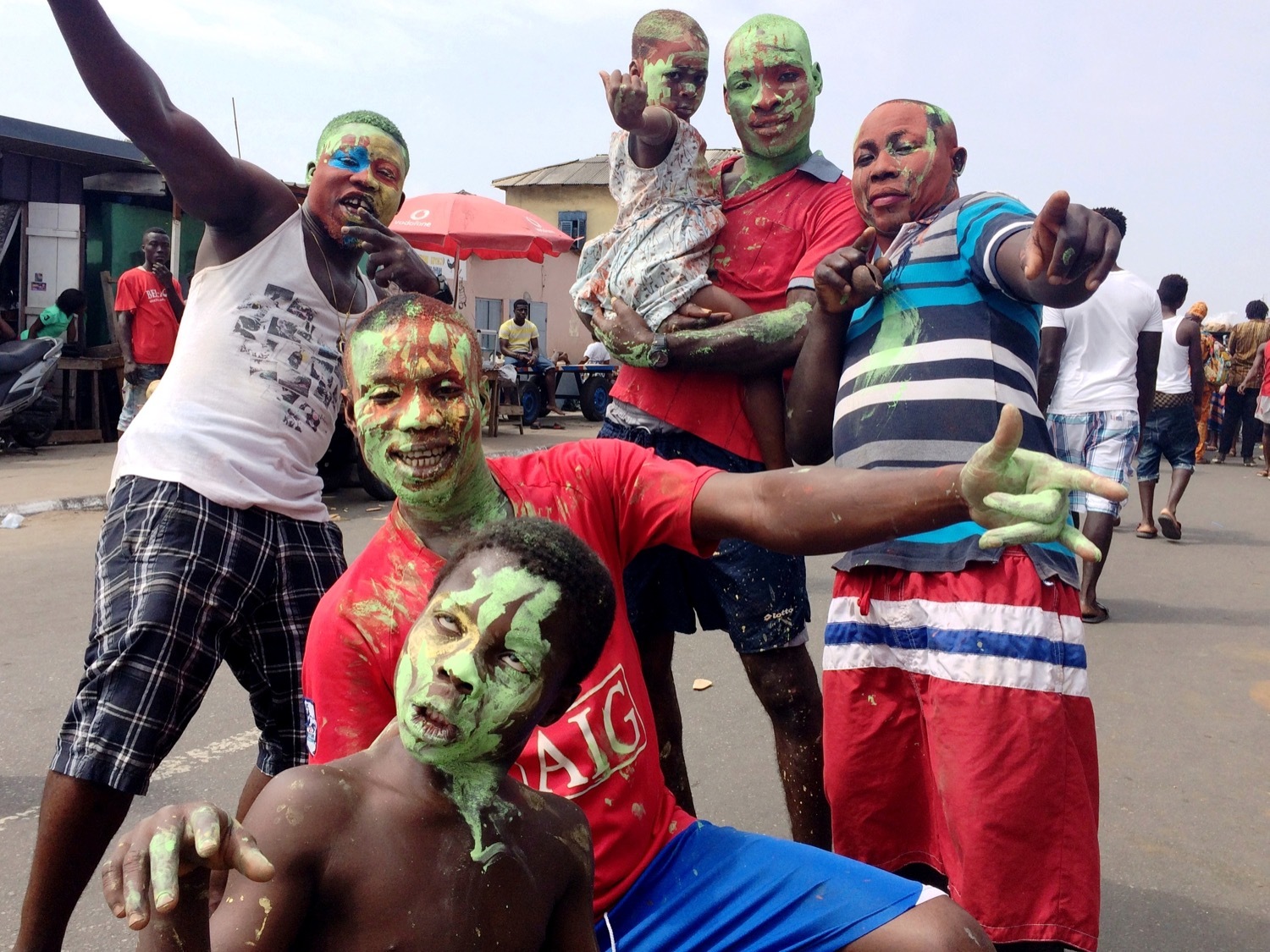 Another dominant element of the festival that Evi pointed out to me is that of the selfie culture that is so present in Ghana, and especially at Chale Wote. She says, “Everyone likes to take pictures of other people, or together with other people, or of themselves somewhere. Also, the performances are very posey in a way. So they will just stop and pause, and everyone can take pictures of it, because that’s the only thing that’s going to survive of the performance. So, the picture is very important.”

In fact, there were so many selfies being taken that it became hard to avoid being in one. Stopping to take a selfie with me was Ernest Obobisa who lives in Accra. “This is my third time at Chale Wote,” he said proudly, “and it’s getting bigger every year. This year I’ve liked Serge Attukwei Clottey’s street performance. He gives us new things every year, and I was very impressed by his performance this time.”

Patience Anabil from Winneba (Ghana) chimed in “Even though I live close by I’ve never been to this festival before. Now I see it’s a big hub for talent, arts, and above all, culture.”

“It’s my first time coming here too,” addedNana Yaw Antwiboasiko from Weija (Ghana). “And I’m impressed with what I’ve seen so far. Great artwork everywhere and people dressed in a way that tells you they are trying to tell a particular story. You see artists all around, everybody trying to exhibit his or her skills or individual talent, and it’s amazing.” 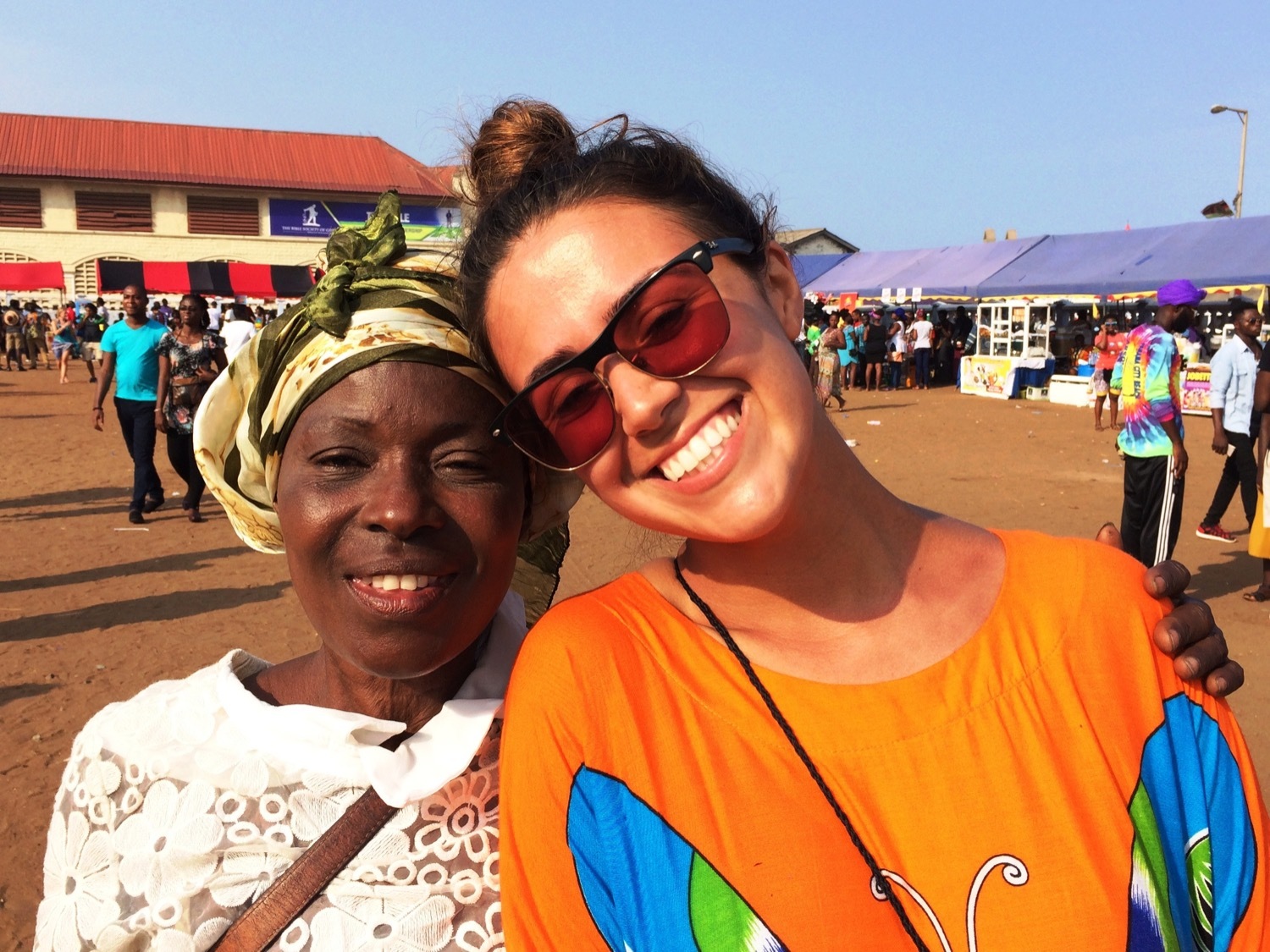 As Nana touched on, fashion was definitely also a high point with performers and attendees alike wearing bold, colourful and innovative designs. “The fashion here is insane!” said Hailey Huff from the USA. “Everyone is so dressed up, and this is really like a catwalk for them. People love it, and I’m so lucky to be here and experience it too. Everyone here came together to celebrate something that’s so universal. You don’t have to be from Ghana to enjoy this. You can be from anywhere in the world, and the art still moves you. It’s a beautiful experience.”

I couldn’t agree more… Chale Wote Street Art Festival 2016 was a beautiful, colourful, chaotic, playful, cosmopolitan, and proudly Ghanaian experience. And I’m already excited for what next year’s event might have to offer!