The best vegan and vegetarian restaurants in Bangkok

Meatless venues even carnivores would cheer

Calling veganism a trend is so last year. It’s now a legit lifestyle option, thanks to advocates who relentlessly point out that a meat-free, plant-based diet is beneficial, not just to one's health but to the environment as well. (Did you know that animal agriculture is responsible for 18 percent of greenhouse gas emissions or that the leading cause of rainforest destruction are livestock and feed crops?*) So it’s a good sign that we’re seeing more plant-based establishments cropping up in the city.

We’ve rounded up the best vegan and vegetarian restaurants as well as vegan delivery options in the city, from creative vegan eateries to a raw food cafe to a shop that sells plant-based cheese. Whether you’re a full-time vegan, a dabbler in the diet or somewhere in between, any of these places won’t have you asking for meat. 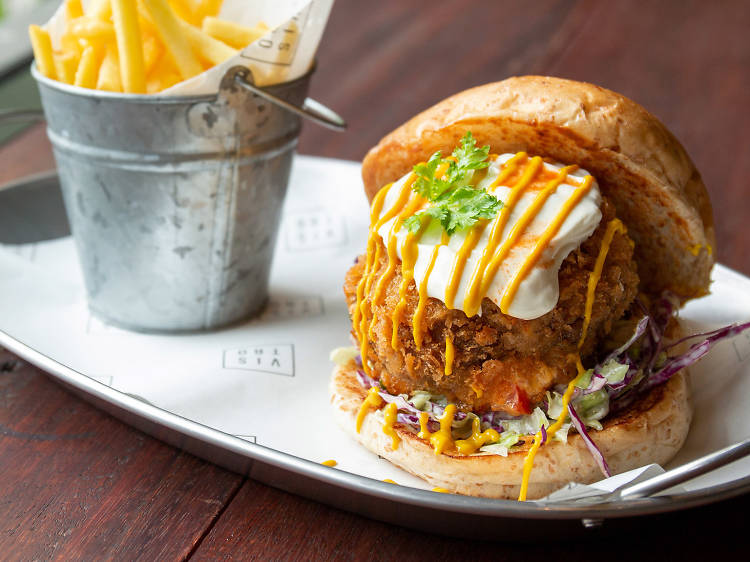 Vistro has filled in a gap that seemed to be missing in the city’s herbivore scene, offering the most creative takes on typical vegan fare. The vegan dishes here are so flavorful that a carnivore may even consider going full vegan after a meal. The two-story establishment is airy, plant-filled and sizeable. The first floor is perfect for grabbing small healthy bites and drinks to go, while the second floor is where all the creative dishes are served. Don’t miss the Vistro Dumplings, a moreish snack served with Taiwanese-style chili oil and gyoza sauce, and the Habibi Wrap, which stuffs marinated “chicken,” iceberg lettuce, red cabbage, and bell pepper in a soft wheat tortilla. End your meal with a gooey brownie topped with a scoop of vegan ice cream. Their house-made kombucha and wellness lattes are also a must.

Check out their Facebook page as they often host vegan weekend brunch with pancakes, smoothie bowls and savory waffles.

Order via Foodpanda, Grab, Lineman or order directly to get 20% off 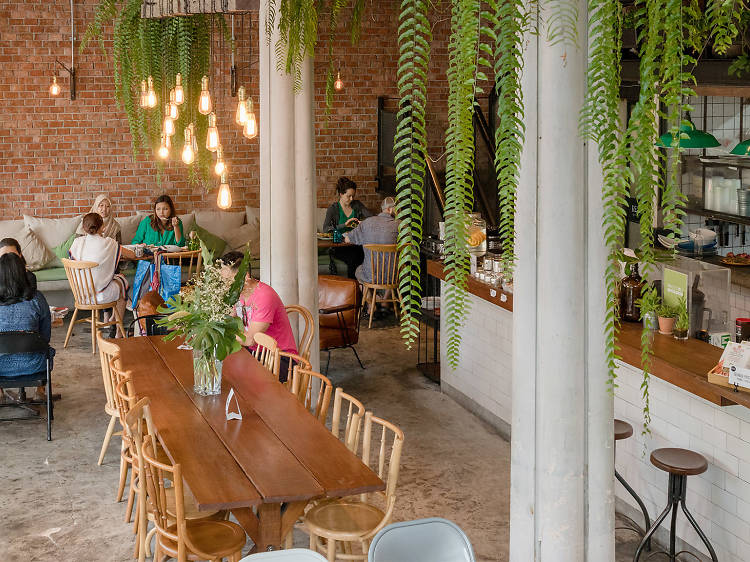 Broccoli Revolution is leading the surge against the earthy crunchy reputation usually associated with meatless places, as seen from its always-packed restaurants in Thonglor, Central Embassy and Charoenkrung. Its plant-based, vegan menu consists of hearty salads, sandwiches with cashew cheese, Thai dishes with a modern vegan flair, and a bestselling broccoli and quinoa burger slapped in between charcoal buns. It would be in
your best interest to stay for dessert. The banoffee pie and homemade soy ice cream are guiltlessly indulgent, all of which are provided by small bakeries and suppliers such as Theera, a social practice that works with kids with special needs. 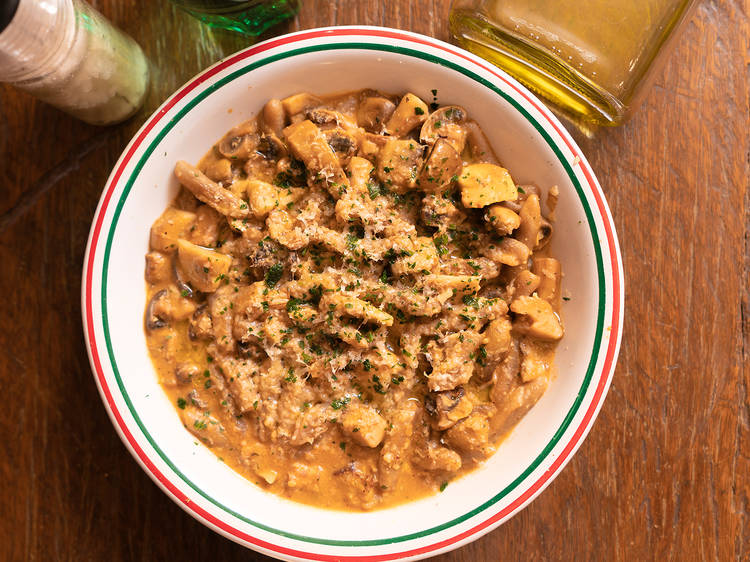 Barefood Bangkok has proven that being vegan doesn’t mean cutting out the salty, stretchy goodness cheese provides. Wanting to create food that is delicious, plant-based, non processed, and use locally sourced ingredients as much as possible, Thai owner Taksina Nuangsri and Italian chef/co-owner Edoardo Bonavolta, started a nut cheese business about three and a half years ago. Their cheeses are made with cashew sourced from the south of Thailand, and are offered in six flavors: truffle, chili, classic, smoked oak wood, mixed herbs, and smoked jack. Aside from the cheese platter, don’t miss the Barefood Cheeseburger, which boasts a succulent patty made with tempeh, zucchini, beetroot, radish, mushroom, koji (a type of fungus), and flaxseed. If you like mushrooms, their house-made, whole-grain pasta with mushroom porcini sauce is a must.

Order via Lineman or FoodPanda 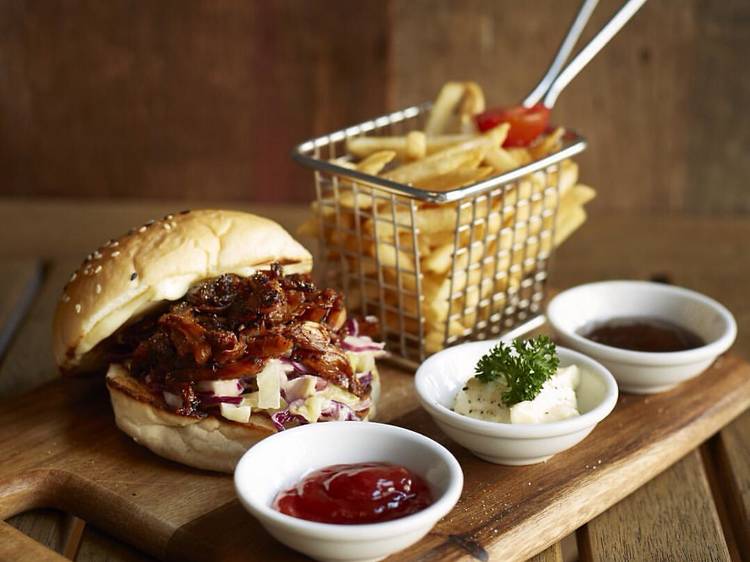 With three mall outlets and one stand-alone restaurant in Sukhumvit 24, Veganerie is one of Bangkok’s vegan key players, churning out delicious breakfast-perfect grub like pancake and waffles, zucchini pasta topped with meatless balls, and more fulfilling choices like massaman curry and vegan “pull-pork” burgers. The coconut and soy-based ice cream, desserts and smoothies are as impressive as their savory counterparts—we beg you to try the soy banoffee waffles and chocolate mousse pie.

Order via Foodpanda, Grab, Lineman or GET 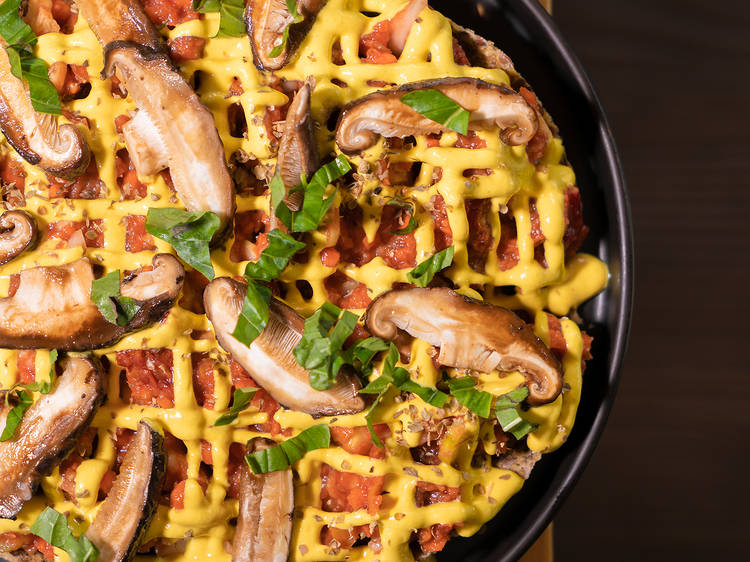 There’s a raw food solution to any craving at Rasayana. Pasta? Check, in the form of chewy and satisfying zucchini noodles topped with a fresh and spicy marinara sauce. Pizza? Oh yes. The mushroom pizza has a flaxseed and mushroom base and is topped with sauce and vegetables. But one of the tastiest entrees is the nut loaf made with almonds, fresh vegetables, herbs and spice. While the savories are satisfying enough, the ambrosial after-meal treats should not be ignored. Try the lemon tart, a treat hinging on macadamia, lime, and coconut or the banoffee pie with nuts, dates, banana and cacao. Don’t say we didn’t warn you. 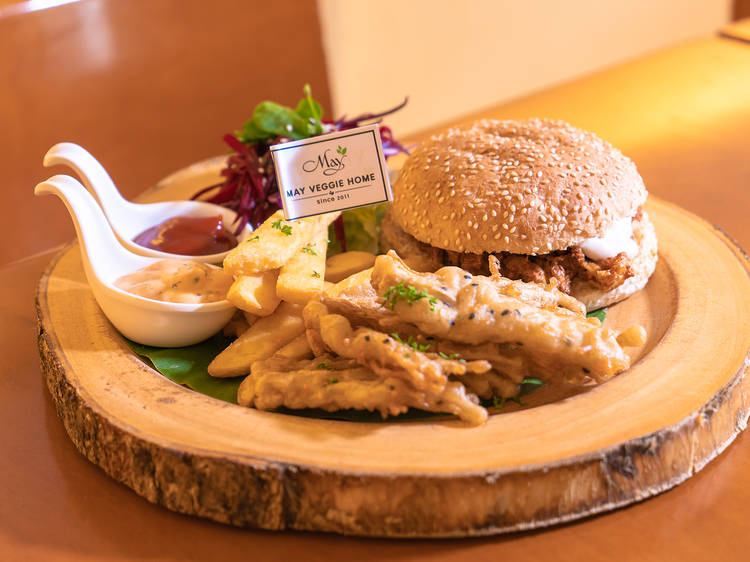 Order via Grab, Lineman or Chefsxp 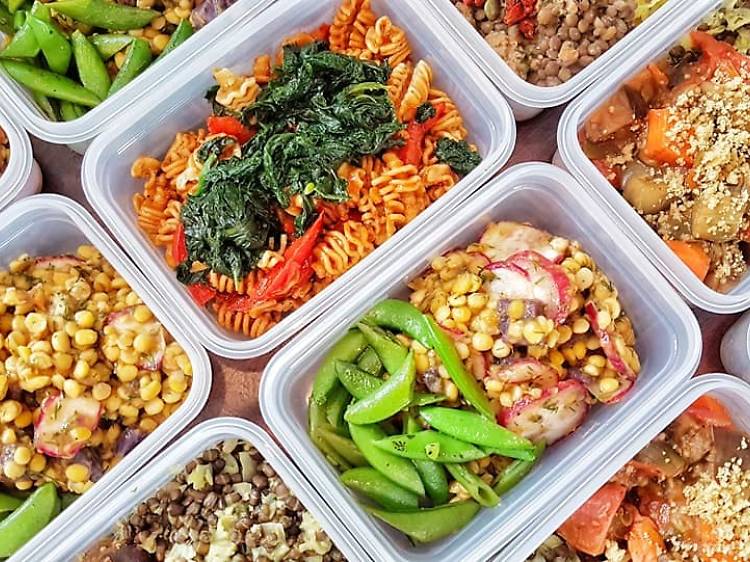 Vegan Crush prepares and delivers delicious 100-percent plant-based meals to your doorstep every Monday (for those living in Bangkok and the city outskirts). You can opt for five to 10 meals each drop, and enjoy a good variety as their meal plans change weekly. The food is low in sodium and oil, and created with unprocessed natural ingredients. Enjoyable menu items include a spinach hummus topped with sauteed wintermelon and roasted chickpeas, and roasted sesame tempeh with mung beans. Vegan Crush also uses reusable food containers and bags to reduce waste, so you will be asked to swap them on the next delivery. 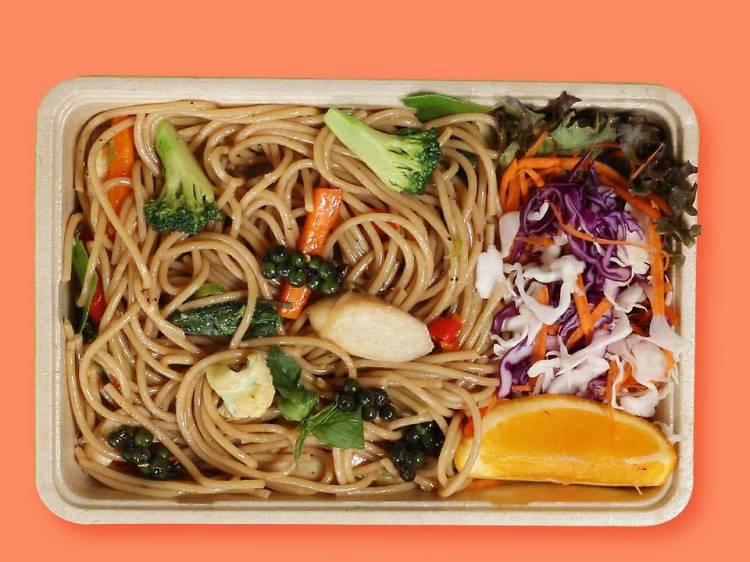 What sets Pranaa apart is that, in addition to delivering plant-based meals to your door, they change their menu every day, and every meal is whipped up daily and free of oil, sugar or refined carbs. The menu spans Thai, Asian and Western fare, so expect to see dishes like kuakling mushroom, okra daal, and yellow rice and quinoa burger. Every meal set also comes with a snack and smoothie. One meal is priced at B350, a two-meal set is priced at B450 and three meals at B550. 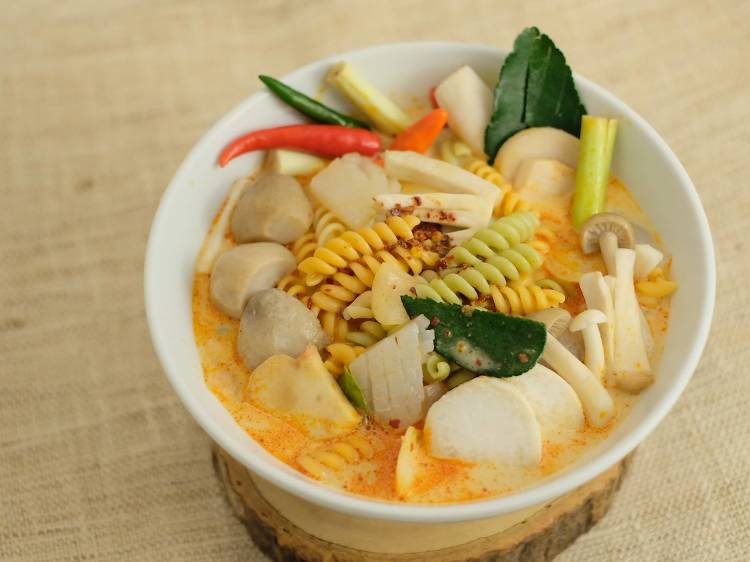 Its location in the Bangkok Mediplex Building in Ekkamai might be uninspiring but the meat-free Thai menu like spring rolls of mixed veggie salad with peanut sauce and red “duck” curry with tofu does more than enough to pull in the local veggie crowds.

Order via Foodpanda, Grab, Lineman or GET 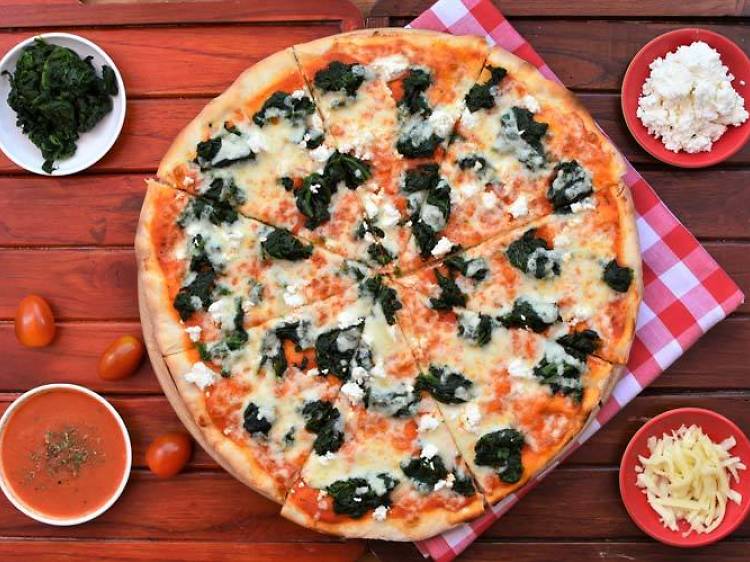 Long-standing Italian restaurant Govinda silences detractors of vegetarianism by proving that meat-free dining can also be filling, flavorful and oh-so-indulgent. Many classic Italian dishes are present and accounted for: ravioli, melanzane parmigiana, minestrone, insalata cappricciosa and pizza salami (with soy sausage, of course).

Order via Lineman, Grab or FoodPanda 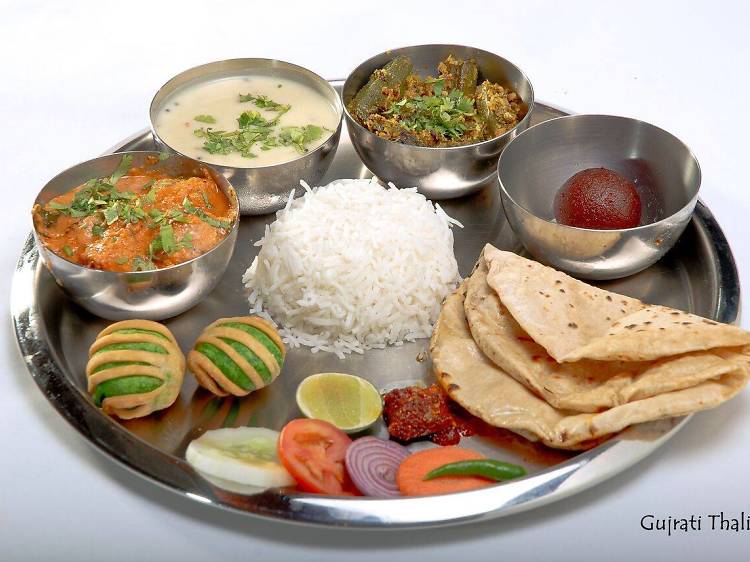 This humble-looking Indian eatery is renowned for its spicy curries, amazing thali specials and authentic Indian sweets. The food is purely vegetarian and the prices are low enough to inspire greedy ordering.

Order via Lineman, Grab or FoodPanda 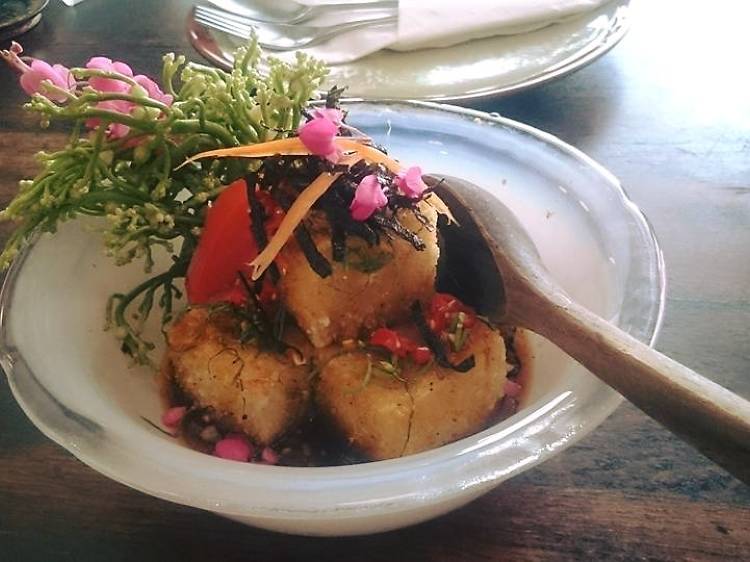 For more than two decades, Anothai has been a trusted friend to discerning vegetarians who demand more than stir-fried tofu. Its inventive, globetrotting menu – inspirations look to Thai, Italian, Indonesian and Japanese cuisine – finds success even with omnivores and guilt-ridden carnivores looking to improve their karma.

Order via Lineman or Grab 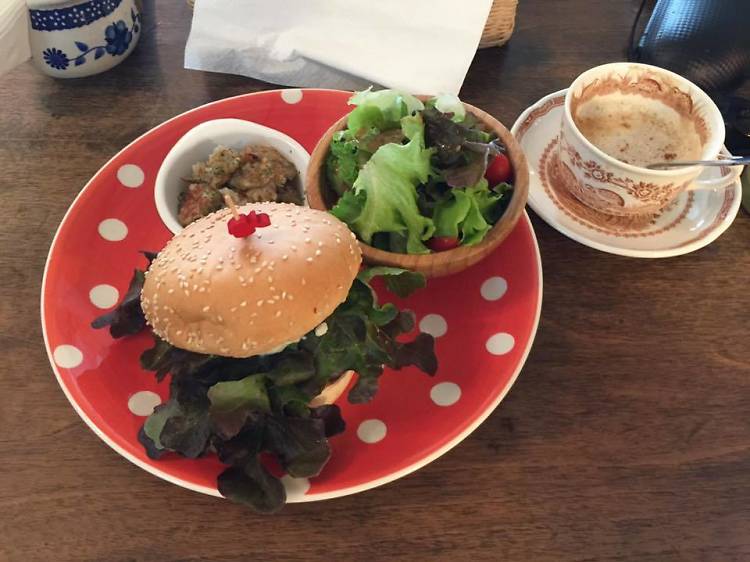 This homely all-day venue has been known for its charmingly raggedy features starring eclectic décor that comes with unpretentious service. You’ll find the likes of teriyaki burger made of tofu and onion, raw zucchini pasta with tomato sauce and puréed cashew cream and whole wheat pancake with rich plant-based chocolate mousse.

Order via GET or Grab 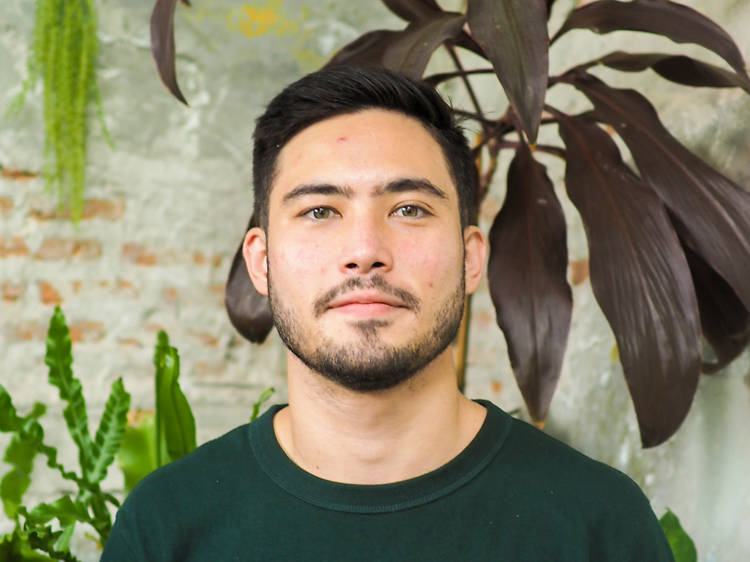 Why did you become vegetarian?
The reason I became plant-based was, firstly, for health reasons. I started having some food intolerances, like dairy and yeast. So I started studying more about nutrition and I read more about how plant-based eating was better for your health, about saturated fat and animal products, hormones, and factory-farmed meat–all these things. When I switched to a more whole-food, plant-based diet, I was able to heal a lot of the food intolerances that I had. I also watched documentaries like Cowspiracy and read Michael Pollen’s books, and realized that the environmental impacts of animal agriculture and factory farming are also a huge issue. And lastly, watching documentaries like Dominion and seeing videos of how animals are treated in factory farms made me sort of understand the compassionate side of this diet. 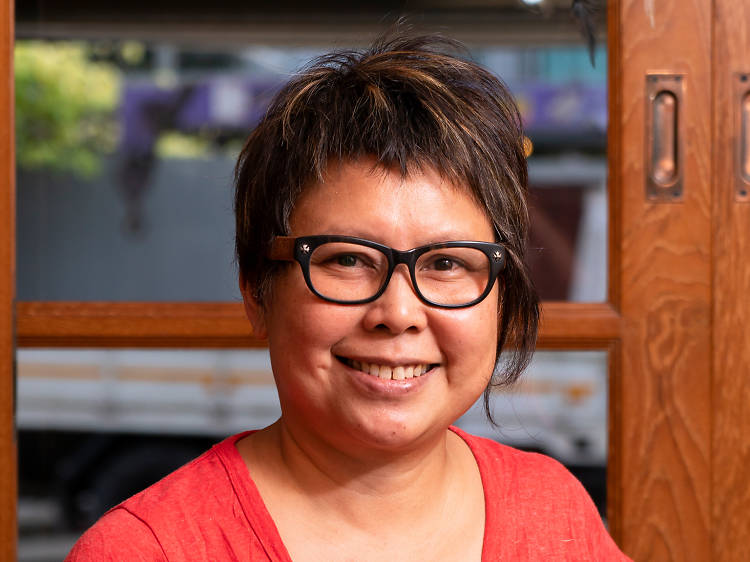 Why did you start making this kind of food?
Because we wanna eat it! We’re selling food that we eat. This was the starting point. We’re not selling this kind of food so others will like it. If you don’t like it, that’s your business. But we eat everything we make. We don’t have to declare that we’re this and that. People like to ask why we’re making vegan food when we’re not vegan. So I said, why not? Think about it. Most farmers are not vegan, but they’re still growing vegetables.

So, you’re a meat eater who likes to eat unprocessed food?
I used to be a flight attendant. Oh, don’t even get me started. All the food served on the plane is heavily processed. [Eating food like this really promotes diseases like gastroesophageal reflux disease and allergies.] All these processed food have chemicals in them. Even in alcoholic beverages, you can choose to have well-crafted ones or those chemical-packed commercial ones. Drinking one portion won’t cause any visible effect, but if you keep having them, it will accumulate. So when I decided to be a food producer, I came up with something that won’t negatively affect consumers in the long term. 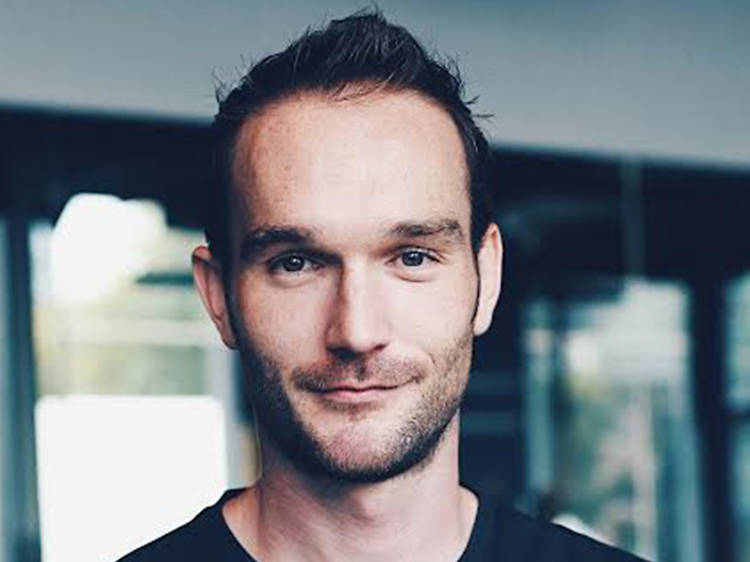 Do you think athletes can gain muscle effectively by following a vegan diet?
It's tough, but possible. Consuming complete protein is an important part of the muscle-building process and the easiest way to do this is by consuming meat and fish. All animal products are not created equally, however—it’s important that you choose high-quality, organic meats and wild-caught fish over poor-quality, factory-farmed meats. It also appears as though some people are more adjusted to a diet of meat whereby others can get by just fine on a vegan diet. Whichever diet you choose, keep track of how you feel and your health markers.

What kind of plant-based protein would you recommend to your vegan clients?
We use Sunwarrior plant protein in our smoothies at BASE, which is a great source that's easy to add to smoothies. Tofu, tempeh and legumes, like chickpeas and lentils, are all good sources. You can also get protein from nuts but they are very high in calories so keep tabs on your consumption. 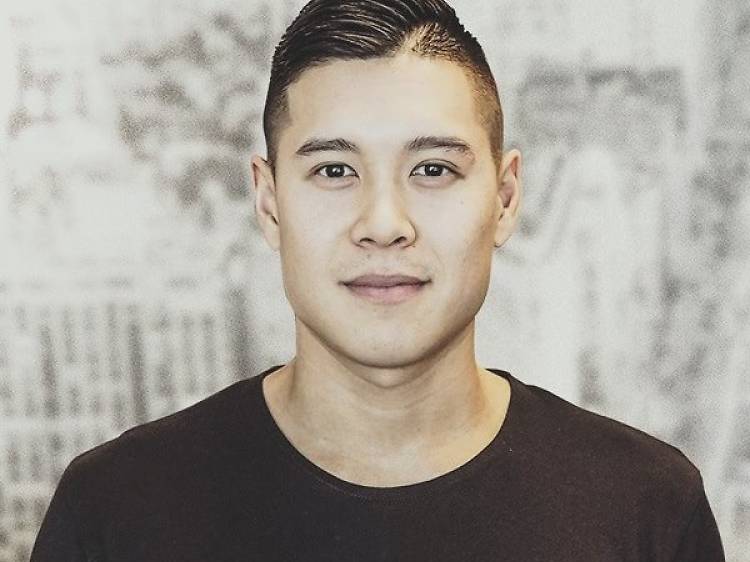 Do you think a vegan diet provides the sufficient nutrients one needs in a day?
The short answer is no. I do not believe a vegan diet provides sufficient nutrients in the ong term. Yes, a vegan diet can be loaded with vitamins, minerals and nutrients, but ultimately it comes down to the bio-availability of these nutrients, how much of these your body can actually absorb and utilize. Having said that, I do believe there are people who can thrive on a vegan diet, most of whom are really disciplined in supplementing with
certain nutrients that you can mostly get only from animal products (i.e., vitamin B12).

What do you think of plant-based “meats”?
If there was reputable clinical research that shows “plant-based meat” is actually good for you, that it would actually slow down climate change, or that is was better for the environment, I’d be in. However, we have yet to see. I genuinely don’t believe that these companies have the public’s health and well-being as a top priority. When it comes to eating healthy and giving our bodies what it needs to thrive, it’s all about eating real and unprocessed food. How many ingredients does it take to make a Beyond Meat burger? 22. How many ingredients are in a beef burger? One.