Delicious street food, golden shrines, and a charming local community are what brings tourists to Yaowarat, Bangkok’s famed Thai-Chinese neighborhood. For years, getting to Yaowarat required sitting in congested traffic, mainly due to construction work on the subway line running through the area.

But with the recent inauguration of the Wat Mangkorn MRT station, a visit to this historic part of Bangkok has never been easier. Here’s what you need to check out in the area. 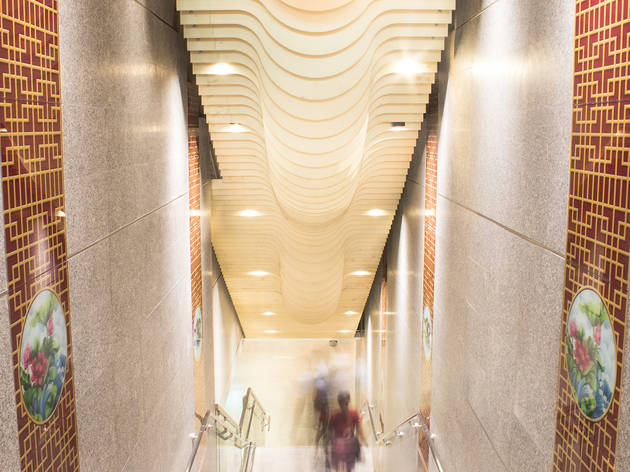 This is perhaps the most eye-popping stations in the MRT Blue line extension. Painted in bright red, the station features AR-equipped drawings by artist Phannapast Taychamaythakool depicting the life of Chinese immigrants in the old times alongside images of dragonsand mystical beasts. (Note: the art is commissioned by a coffee brand, and is temporary). The walls of escalators climbing up to the ground level is decorated with intricate Chinese patterns as a reference to the décor of Wat Mangkorn Kamalawat, one of the most reputed Chinese temples in the neighborhood. 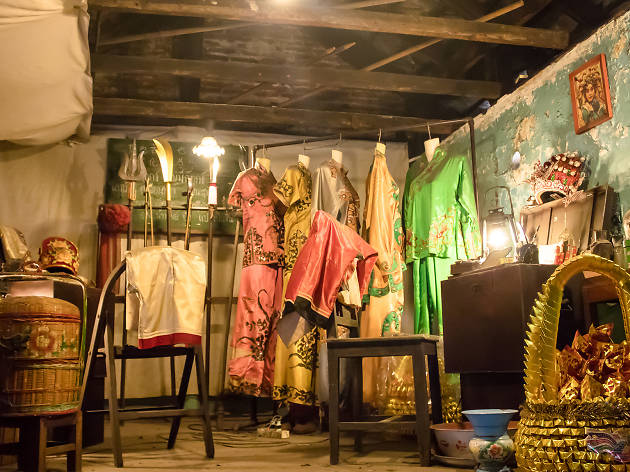 This museum in Charoenchai reveals the history and culture of Chinese settlers as told by the people in the community themselves. Interesting exhibits include a timeline of how the Charoenchai community came into existence, an account of celebrations in the Thai-Chinese community, and a small showcase of costumes worn by Chinese opera performers. 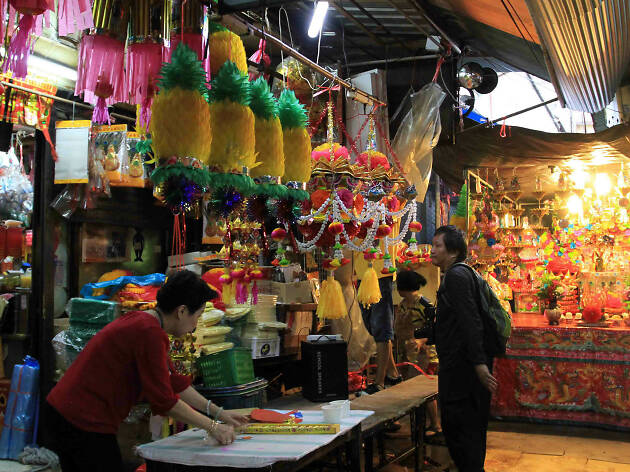 Tucked in a small alley between Charoenkrung and Phlap Phla Chai Road, the Charoenchai community still clings to certain traditions and rituals of the old days. Chinese immigrants settled in this community in 1780, and soon became known for producing Chinese joss paper, which is a staple in Chinese religious rituals. A stroll around the neighborhood will expose you to a variety of these papers, from those used for wishing purposes to those burned in Chinese funerals. 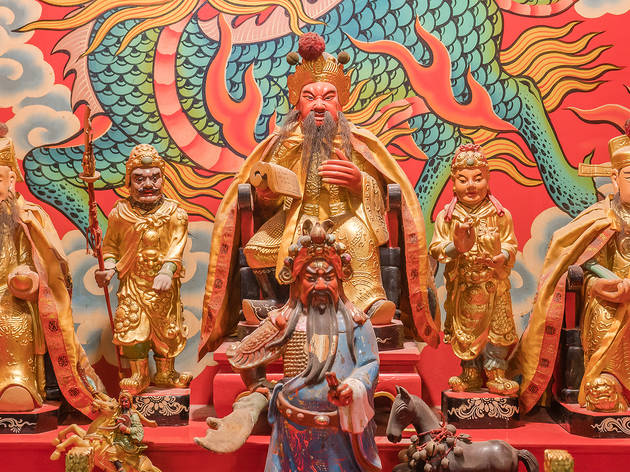 An inscription on this shrine say that it was erected in 1658, although experts estimate that it was built a 100 years later, at about the same time the Chareonchai community settled in the area. Regardless of the date it was built, it remains one of Bangkok’s oldest Chinese shrines.Built in the Teochew style, it features dragons wrapped around rice grainshaped pillars. Inside, the shrine holds Chinese artifacts from the Ming and Qing dynasty, including an antique bell built in the reign of the Daoguang emperor, the sixth Qing emperor to rule over China. 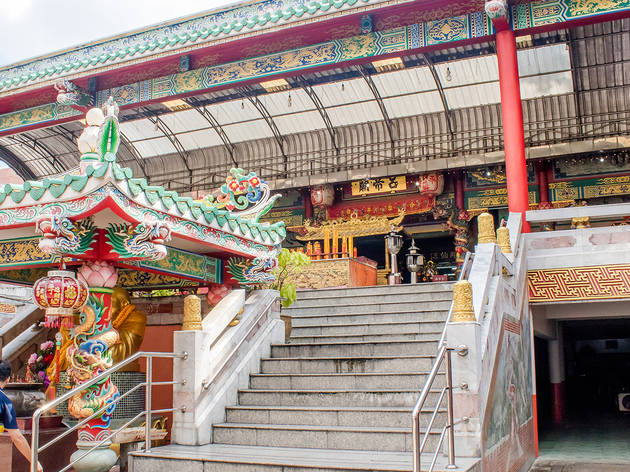 This Taoist shrine is a reconstruction of a previous religious site that burned down in 1988. Originally built in early 20th century by Hakka merchants, it was known as a “healing temple” that gave medicine to Chinese, Indians and Thais in exchange for a small donation. You can still get Chinese medicine in the temple, courtesy of a Buddhist kau chim oracle. Consultations on Chinese medicine are also available for free. 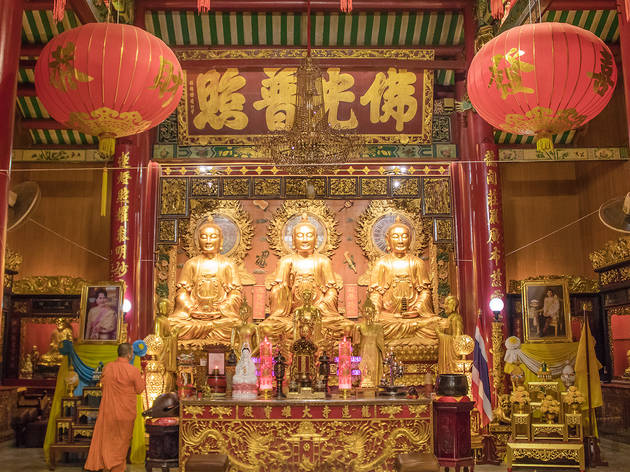 Home to 58 gods, Wat Mangkorn Kamalawat is said to be one of the most sacred sites in the area. Local Thais visit the temple and offer prayers to the Chinese god that protects and control one’s fortune, in hopes of aligning their year with good luck. Though built in the Teochew style, Wat Mangkorn’s layout is based on royal Thai temples. 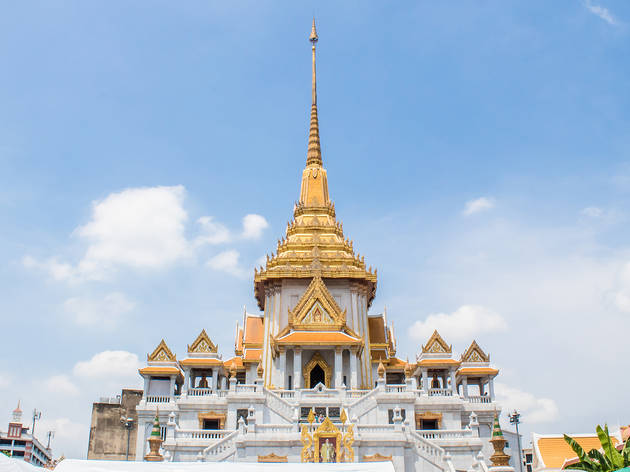 This marble-clad structure is home to the seated Phra Phuttha Maha Suwana Patimakon, known as the world’s largest golden Buddha statues, as certified by the Guinness World Records. The building is also home to the Yaowarat Historical Center where a small museum details the history of the area since the arrival of Chinese settlers. 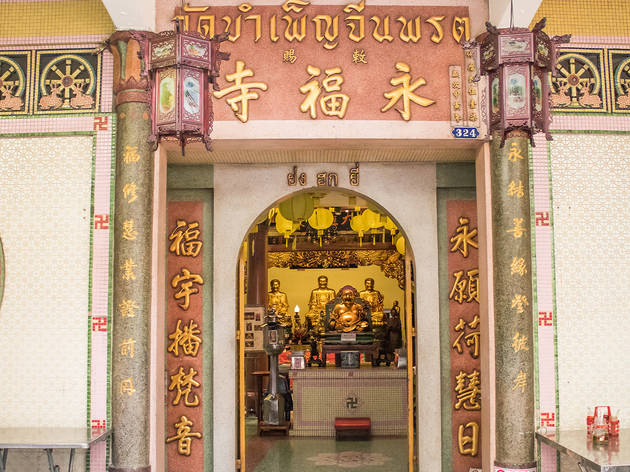 One of the oldest temples in Bangkok, Wat Bampen Chine Prote was built in the reign of King Rama I, and boasts traditional Teochew-style architecture within a Western-style building. The temple also features a main hall that’s said to be the country’s smallest.