While many of us would consider Ravenswood or Logan Square Chicago’s top craft beer neighborhood, the South Loop is rapidly redefining itself by the beer being produced and poured within its boundaries. In the past six months alone, the area saw the opening of the Vice District and Motor Row breweries and taprooms, along with the neighborhood beer bar First Draft. With the recent re-opening of craft beer bar Villains and the coming Baderbrau brewing facility, the Sloop suddenly has a lot more going for it than high-rise condos and convention traffic.

The cherry on top of this beery sundae will be once the beermaker actually named for the neighborhood—South Loop Brewing Company—finds itself a home. (The outfit is currently brewing in Andersonville at the Aquanaut space, which ironically might be the farthest-north brewing facility inside city limits.) Until then, should you find yourself south of Congress, don’t feel like you have to rush back north for a pint with options like these. 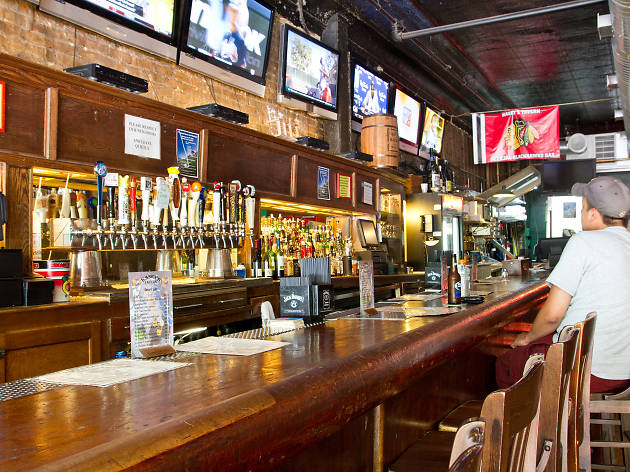 Kasey’s claims ownership of the second-oldest liquor license in the city of Chicago and could probably coast on that history, but thankfully the bar hasn’t descended to any such mediocrity. This classic Chicago tavern is the kind you don’t see much of these days, and each one left is worth hanging on to. That’s especially true for spots like Kasey’s, which pours more than 100 beers. It’s easy to picture printhouse workers with their boots on the rail, filling their lunch pails with beer for the road. Sadly, taking draft beer home from the bar isn’t legal these days, but the wide variety of brews at Kasey’s will help you forget about that. 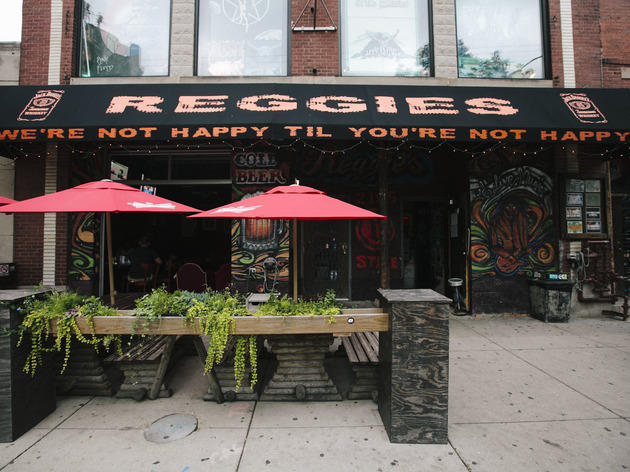 Best known for bringing hardcore acts to a near-vacant part of the Sloop, Reggie’s is also damn good at pouring quality beers. You'll find dozens of taps in the main bar, and the music venue and rooftop bar pour brews from 3 Floyds, Solemn Oath and Dogfish Head. The club also hosts the occasional beer event or two and even hosts bus rides to Dark Lord Day. If you have a burning desire to see a touring metal act and drink a good beer while doing so, there's no better place than Reggie’s. 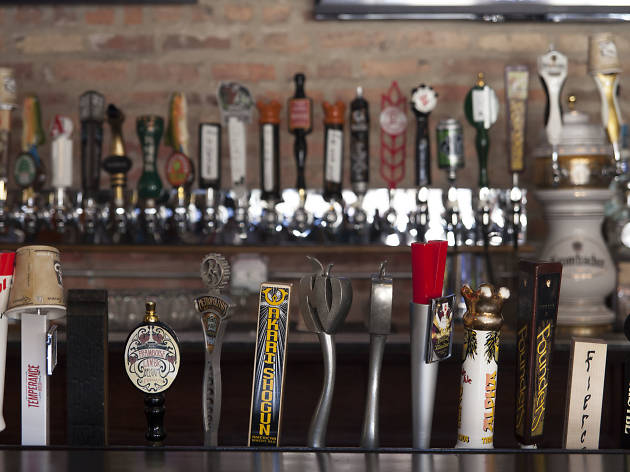 At this point, even opening a Starbucks with less than 20 draft handles seems almost unthinkable on the North Side, but when this spot quietly opened with 50+ beers on tap in 2014, it immediately added some much needed beer list-depth to the area. Located in the spot first held by Villains when it was one of the city’s many burger and beer bars, First Draft is the kind of low-key locals bar that’s also a destination for beer enthusiasts—every neighborhood could use more of what it's selling. At a time when many others are trying to be the next tiki bar/food truck/banh mi/fried chicken shack, it’s nice to see a place comfortable enough to just be a really good bar and grill. 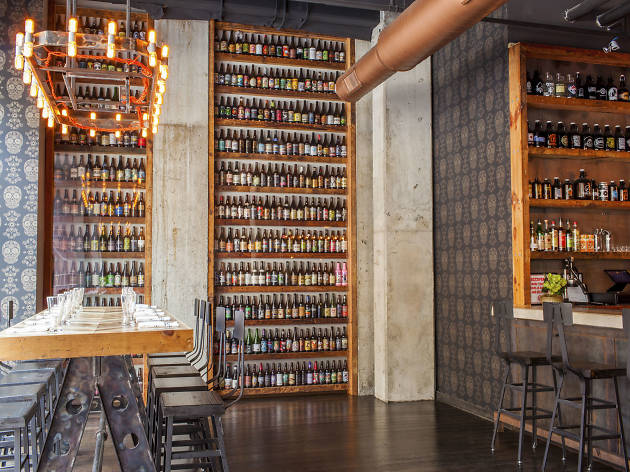 When the first iteration of Villains shut down in late 2012, few people blinked. The restaurant promised to reopen, and in contrast to many others, actually followed through, though now with new ownership. The road to reopening was a long one, but in late May, Villains threw open its doors with a parade of amazing small-batch beers from all over the world and a menu to match from chef Dennis Stover (Publican, HotChocolate and Longman & Eagle). The food more than equals the beer—this might be the closest to fine dining a beer geek can get. Finely composed plates like melt-in-your-mouth roasted pork shoulder and fried farmers cheese gnudi sit alongside porters from Spain and farmhouse ales from France. The service is accommodating and already nicely dialed in to four-star levels. (Yes, there’s a burger as well. Yes, it’s very good.) 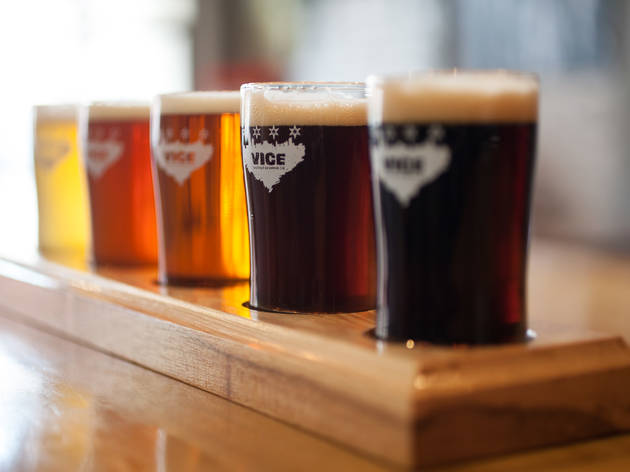 These two breweries opened about five months apart and can be found a few blocks away from each other on Michigan Avenue, but location and beer are about all they have in common.

Vice District is a true taproom dropped into a big, new South Loop building that somehow manages to be the most homey, communal-feeling place in the area. It brews a wide variety of beers that can be enjoyed almost entirely on-site.

Motor Row, (2337 S Michigan Ave) on the other hand, spent literally years moving into its historic location that once sold some of Chicago’s first horseless carriages. It features a relatively tiny space in the front with a few seats for folks to sample flights of whatever’s being brewed for off-site consumption. Make the one-mile hike between the two some weekend afternoon to compare and contrast the differences. The only constant—they both make pretty good stuff. 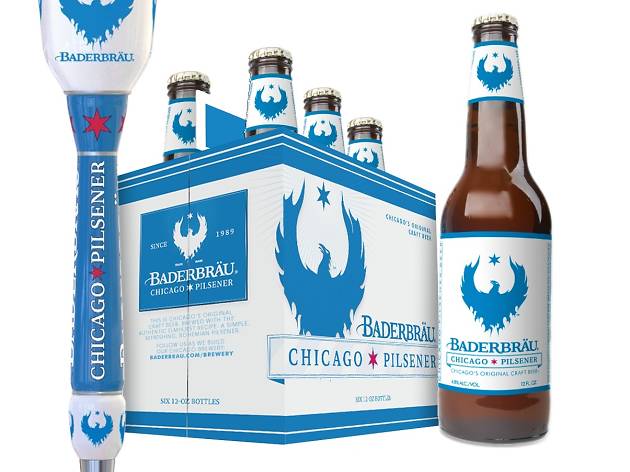 Tentatively opening in autumn 2015, Baderbrau comes full circle by bringing its brewing back to Chicago. The original Baderbrau predates the current craft beer boom by more than a decade. As one of the first craft beers in town, Baderbrau was the name of a highly regarded pilsner in Chicago back in the early '90s. The brewery eventually went under, but the brand was revived a few years ago by new owner Rob Sama, mostly by contract brewing in Wisconsin. Plans to bring the beer back to a 25,000-square-foot space in the South Loop will complete the homecoming process, and make the company's Lawnmower Lager (the best beer currently available) that much fresher.