Summer in Chicago doesn't really hit its stride until June, when the days are long and the threat of a late-season cold snap finally feels like a distant memory. And even though things aren't quite back to normal yet (Chicago's summer festivals won't start until July, for example, and some have been canceled entirely), you can bank on celebrating the season in style this year with tons of events, concerts and other cool happenings around the city. Round off your work week with drinks at the best rooftop bars in the city and spend the weekend sunning at one of the many Chicago beaches; we also recommend taking advantage of all the new outdoor programming, from drive-in shows to windowside art exhibits, for more opportunities to enjoy the balmy weather. Give a warm welcome to the summer season with our list of the best things to do in Chicago this June.

RECOMMENDED: Events calendar for Chicago in 2021 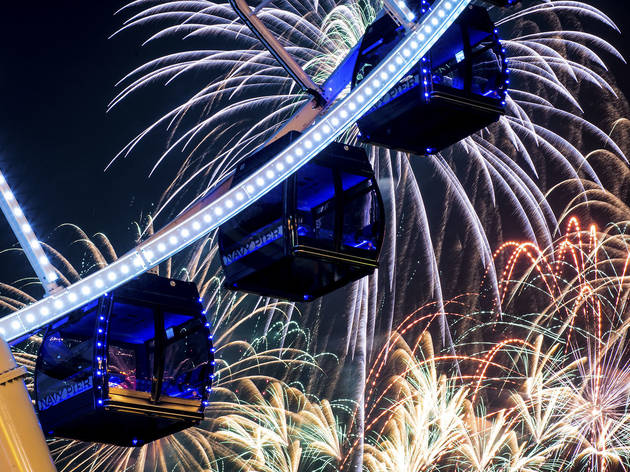 During the summer, one of the best aerial displays you'll find in Chicago originates from Navy Pier. From Memorial Day weekend through Labor Day, the fireworks will begin at 9:30pm each Wednesday and 10:15pm each Saturday and you're welcome to enjoy them from Navy Pier's various public spaces. Of course, you can also take in the show from nearby beaches or while cruising along the Lakefront Trail. 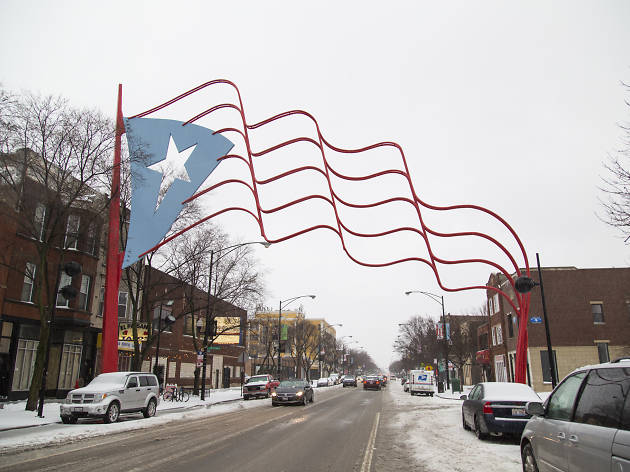 Every Saturday through August, the Puerto Rican Cultural Center is teaming up with businesses on Paseo Boricua (a section of Division Street) in Humboldt Park to host a series of events. Visitors will be able to shop the wares of local street vendors, take in cultural performances such as DJs and salsa dancers and support the businesses that make up Chicago's Puerto Rican community. Check out the El Jolgorio de Salsa y Más Facebook page for the latest updates from organizers. 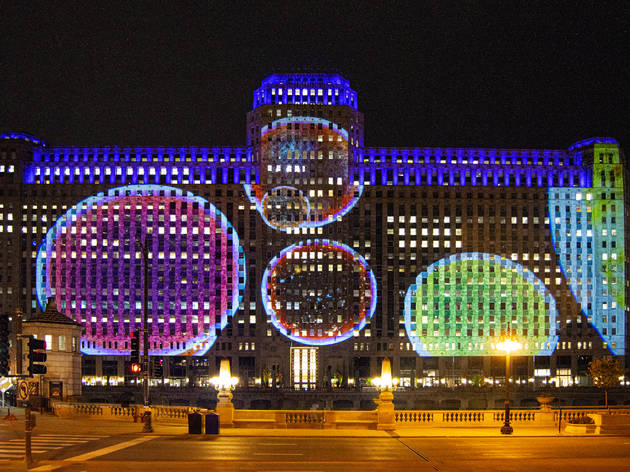 After taking most of the winter off, Art on theMart is back with another 25-story-tall video installation that takes over the side of the Merchandise Mart. The new program is based around a collaboration with the Adler Planetarium, transporting viewers into the cosmos with scientific visualizations that demonstrate just how gigantic the universe really is.  Entitled Astrographics, the 16-minute video was created using imagery from telescopes around the world. You'll be able to see images of black holes, other planets, stars and more amazing images that offer a peek at what lies beyond our solar system. The program is accompanied by an appropirately trippy soundtrack assembled from Experimental Sound Studio's Sun Ra Arkestra archives. Art on theMART's array of 34 digital projectors will fire back up on April 1, displaying the 30-minute program at 8:30 and 9pm every evening through April 30. Showtimes will shift to 9 and 9:30pm from May 1 through July 4. The show is best viewed from the section of the Chicago Riverwalk between Wells Street and Franklin Street, though there is a 100-person capacity limit and face coverings are required. 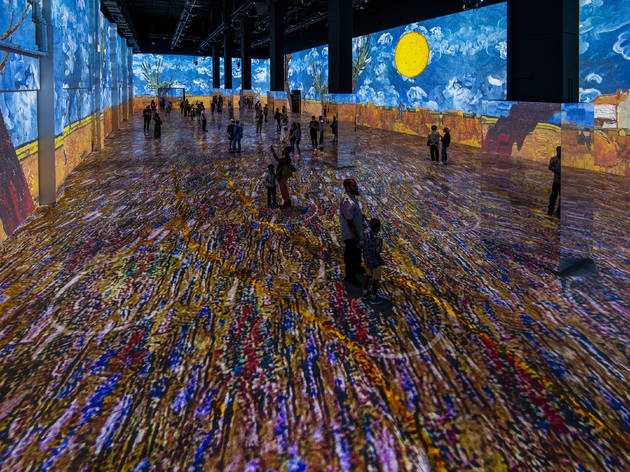 Step inside of Starry Night and The Bedroom in Arles with the help of more than 50 digital projectors in this high-tech exhibition that explores the work of Vincent Van Gogh. Designed by the Italian creative team that worked on the "Atelier des Lumières" exhibitions in Paris, "Immersive Van Gogh" covers 35-foot walls with animated versions of the Dutch painters work, accompanied by a score that blends electronic and classical compositions. The show takes up residence in the Germania Club Building in Old Town, which will go by the name Lighthouse ArtSpace Chicago and host additional interactive art exhibitions in the coming years. Occupying four rooms in the space, the "Immersive Van Gogh" presentation is around 35-minutes in length, with mostly-identical projections displayed in each of the rooms throughout the show. Visitors to "Immersive Van Gogh" will find a variety of saftey measures in place, including social distancing circles within the exhibit, reduced capacity, a touchless ticketing system and face covering requirements for all guests. "Immersive Van Gogh" is currently scheduled to run through September 6.

Nonprofit gallery and community space Pilsen Art House hosts this weekly indoor and outdoor market, featuring local vendors and artists selling jewelry, candles, paintings and other handmade goods. You can stop by every Sunday afternoon throughout the summer—just don't forget to bring (and wear) a mask. 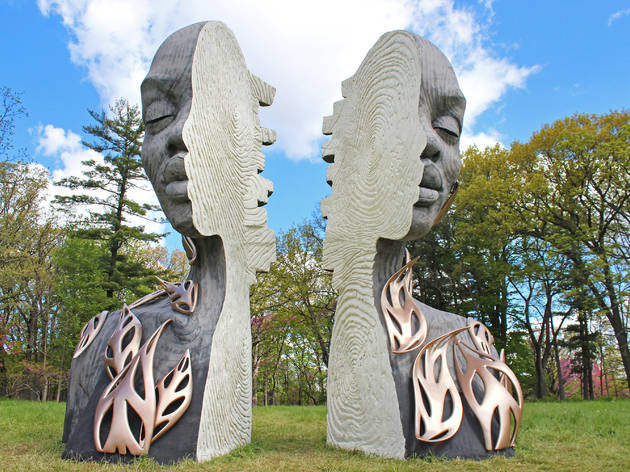 See five towering sculptures by South African artist Daniel Popper at the Morton Arboretum's new outdoor exhibition, which spreads the 15- to 26-foot-tall works throughout the natural area. Made of glass-reinforced concrete, wood, fiberglass and steel, the one-of-a-kind pieces in "Human+Nature" depict human figures that evoke the natural landscape they're set amid, including a pair of 36-foot-long hands reaching out from a grove of oak trees and a maternal figure that springs up amid magnolia trees. Access to "Human+Nature" is included as part of timed-entry admission to the Morton Arboretum, and there's a map that will allow you to easily plan your visit and spot all five of the sculptures along the way. 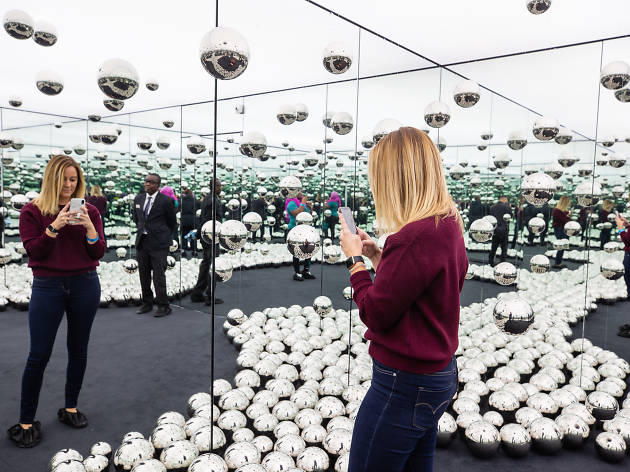 The home of Chicago's only Infinity Mirror Room (created by Japanese artist Yayoi Kusama) is open to the public once again, presenting a new collection of one-of-a-kind art installations alongside some old favorites. New additions to WNDR Museum include a multi-sensory experience from S̶A̶N̶T̶IA̶G̶O̶X that uses artificial intelligence, sounds, visuals and scents, as well as an installation called I Heard There Was a Secret Chord that allows guests to become part of an evolving virtual choir. 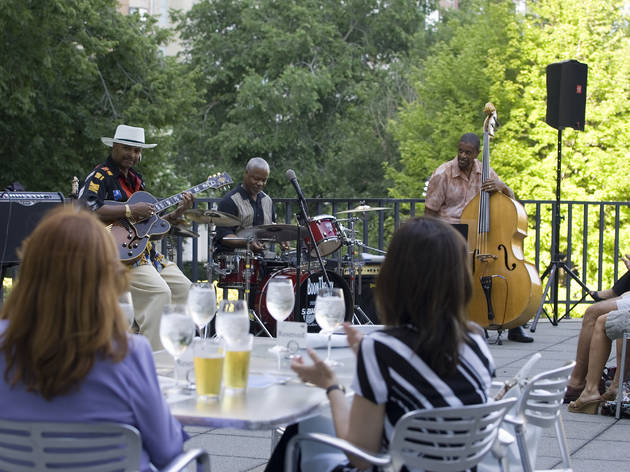 After switching to virtual shows for the entirety of 2020, Tuesdays on the Terrace returns to the Museum of Contemporary Art's Anne and John Kern Terrace Garden this summer for free weekly jazz performances. Grab a cocktail or a glass of wine from a bar on the museum's upper terrace and hear tunes from artists like the Victor Garcia Quartet, Junius Paul / Tomeka Reid Duo and Sharel Cassity, plus tons of others from the local jazz community. Tickets must be reserved online in advance; you can also sign up for a wait list in the event of a sold-out show. 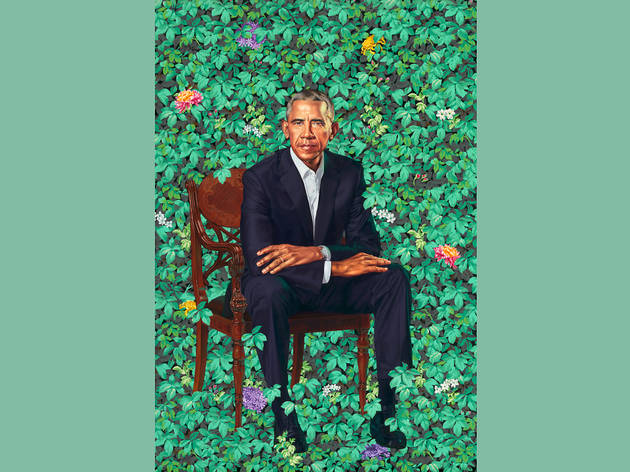 The Obamas are coming back to Chicago, in portrait form! Paintings of President Barack Obama and Mrs. Michelle Obama that debuted at the Smithsonian’s National Portrait Gallery begin a nationwide tour at the Art Institute of Chicago, where the couple shared their first date. Unveiled in 2018, the Obama portraits are notable for their striking modern appearances and use of bright colors, standing in contrast to past presidential portraits that favored a classical style and a somber palette. Painted by Kehinde Wiley, Barack Obama's portrait depicts the president against a wall of foliage, with flowers symbolizing his heritage (including Chicago's official flower, the chrysanthemum) peeking through the leaves. The portrait of Michelle Obama by artist Amy Sherald renders the former First Lady in shades of grey, wearing a designer dress in front of a vivid blue backdrop. The two paintings only stick around Chicago until August 15, before making their way to Brooklyn, Los Angeles, Atlanta and Houston. 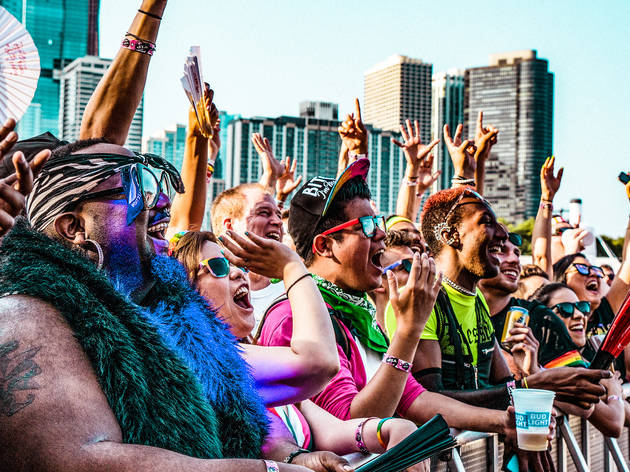 Chicago's Pride Parade and Pride Festival are on hold until October, but more than a dozen performers will still take to Grant Park this June for the two-day Pride in the Park festival, a musical celebration of Pride Month and the city's LGBTQ+ community. Chaka Khan, Tiësto and Gryffin will headline, with appearances from Betty Who, Alyssa Edwards and Tracy Young; you can also catch drag performances from performers like RuPaul's Drag Race stars Denali Foxx, The Vixen and Naysha Lopez. A portion of the proceeds from the event will benefit Center on Halsted.