Each time I’ve mentioned the new Soho House, a private club/hotel geared toward creative types that opened a month ago in the West Loop, friends have raised their eyebrows and commented, “That doesn’t seem very Chicago.” And it doesn’t—Soho House started in London, then added locations around Europe, as well as New York and Los Angeles. Memberships for the space, which includes a members-only gym and screening room and a spa, start at $2,000/year ($1,000/year if you’re under 27), and the general vibe on a Saturday night is River North turned up a notch.

That said, if you don’t want to shell out for a membership, there are three public restaurants you can visit: Chicken Shop, Pizza East and the Allis. While I wouldn’t choose any of them over my favorite West Loop spots, there are a few good reasons for visiting.

The Allis
No matter which of the Soho House doors you enter on Green Street, you’ll walk straight into the Allis, the all-day space that spans the width of the building. There are high ceilings and big windows, plus tables, lounge chairs, a bar and couches. The Allis seems designed for two purposes: for people to settle in with a laptop during the day or to get all dressed up and be part of the scene on weekends. (And, oh, this is a scene. I was wearing a shirtdress and flats and felt wholly out of place.) It’s also the kind of place you could spend an entire day, with a croissant and coffee in the morning, a salad or sandwich for lunch, or small plates like carrot hummus or burrata on toast with cocktails in the evening.

I went to the Allis for afternoon tea, and for $12 received an absurd amount of food—three mini sandwiches, a scone, a brownie, a chocolate chip cookie, a slice of cake and two cups of tea. This is not the best afternoon tea, but for $12? Sure. The brownie is stuffed with chocolate pieces, the scone is pretty decent and the chocolate chip cookie gets the job done. Throw in free Wi-Fi and a spacious, airy ambiance and you’re much better off spending an afternoon here than at Starbucks. I could also see myself popping in for a drink while waiting for a table at a nearby restaurant.

Pizza East
Prior to visiting the Allis, I had lunch at the upstairs Pizza East, which offers a variety of appetizers as well as a dozen pizzas. Start with the heirloom tomato salad, in which ripe tomatoes and big, torn chunks of bread get a salty punch from anchovies and capers. Charcuterie hangs above the bar, and it’s a good deal: For $18, you get sizable servings of cheese and charcuterie like mortadella, San Daniele prosciutto and crumbles of pecorino, along with pickles and bread. The broccolini, which sits atop yogurt and has flecks of chili sauce, was fairly flavorless, a fate that also befell our pizza. The crust on our burrata, tomato and black-olive pizza was spot-on, with a puffy edge that’s nice and chewy. But heavy burrata isn’t the best choice for a pizza with a very thin crust—it quickly fell apart and I had to sprinkle some salt on the pie for more flavor.

Chicken Shop
On the whole, I preferred Pizza East to Chicken Shop, located at the far right and upstairs. The space has a diner vibe, and the simple menu consists of rotisserie chicken and sides—that’s it. We ordered a whole chicken for two of us, along with three sides, and wound up having the rest the next day for lunch—not terrible for a $22 bird. Since the chickens are continually roasting away on a rotisserie behind the bar, they come out in minutes, and you can see chefs hacking them up into manageable pieces. The bird, from Indiana's Pine Manor Farm, is well-seasoned but on the drier side, which you can mitigate with a shake of either the Hot or Smoky sauce (the former is bright and piquant, the latter is thicker and sweeter). Sides are hit or miss: The nice, light butter lettuce and avocado salad was coated with vinaigrette, but the mac and cheese was served lukewarm and the crinkle cut fries were clearly the dregs—our bowl was filled with tiny nubs of fried potato. For dessert, our server brought the entire apple pie the size of a basketball to our table and scooped some out onto a plate. The result? The pie was decent but the presentation was an absolute mess and resulted in our sever knocking the pepper shaker onto the floor.

And that brings me to another quibble with Soho House: The two-top tables are tiny but absolutely covered with stuff—cups of silverware, a bottle of water, napkins, salt, pepper and hot sauces at Chicken Shop (red pepper flakes at Pizza East). Add in a water glass and a drink and there is nowhere to put your food. At every meal, the servers brought out the food as soon as it was ready, and kind of shrugged as we looked up helplessly. In both cases, we commandeered the table next to us to shift dishes around.

The beer list is solid and the same at all three spots. But Chicken Shop omits the name of the brewery, and our server didn’t know who made the Crushed Green Coriander beer (it’s Moody Tongue and it’s damn good). The beer selection also includes Brickstone Brewery’s Hop Skip ‘N’ I’m Drunk and Two Brothers Domaine DuPage, which are much better options than the cocktails at Chicken Shop—both the Vermouth Swizzle and Bourbon & Lemonade had an overabundance of citrus and needed more sugar to balance them out.

It may be because other multivenue places like Chop Shop and Thalia Hall have opened in the past year, but Soho House doesn’t feel terribly out of place in the West Loop. I won’t be rushing back for the food, but as an affordable spot without a wait for tables, it may be what Randolph Street was missing. 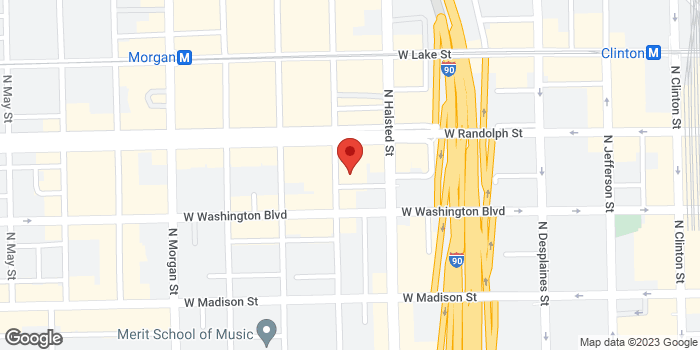