Inside the diversifying world of Chicago’s natural wine scene

Chicago’s new generation of wine lovers are younger, less white and having a lot of fun. 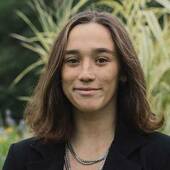 As Bermúdez—who’s now the beverage director at Logan Square’s bustling Mi Tocaya Antojería—would open a bottle of wine, the tasting notes frequently spoke to her from her earliest memories, flavors like tamarind, watermelon or passionfruit. But this was often met with skepticism, or even derision, from her primarily white counterparts.

“I was constantly saying or pronouncing things wrong, because English is my second language,” Bermúdez said. “I constantly thought that things tasted some way to me, but they weren't right to a white man.”

So when Bermúdez started building out Mi Tocaya's first-ever wine list, she knew she wanted to do things differently. Empowered by the restaurant's mostly-Latino staff (including chef-owner Diana Dávila Boldin), she set out to craft a wine program that pairs the restaurant’s diverse range of Mexican cuisine with an equally inventive and wide-reaching wine list—and one that doesn't rely on classical tasting notes and rigorous methodology.

“It was like, ‘How do I make this feel safe for myself and safe for the people that I work with?” she said. Bermúdez recalls feeling immediately welcomed by Chicago’s Mexican community when her family immigrated from Medellín, Colombia, more than 20 years ago, and wanted to replicate that feeling of embrace for the patrons and staff at Mi Tocaya.

“If you taste something, and it reminds you of something, it's nostalgic. It's definitely bringing you back to your upbringing,” she said.

Bermúdez represents a new guard in Chicago's wine industry, one that rejects the high-mindedness of fine dining and collection for an approach that favors community and story-telling. You’ll find traces of this ethos at higher-end institutions throughout the city—places like the Michelin-starred restaurant Esmé (headed by beverage director Tia Barrett, formerly of the Aviary and Entente) or Bronzeville Winery in Grand Boulevard, both of which feature wine lists that highlight Black, brown and women-owned vineyards.

The approach has also permeated Chicago’s natural wine scene, a space already defined by its rejection of winemaking (and drinking) norms.

Natural wine—which, broadly speaking, includes wine that are made in traditional or simplified methods, and may exclude the use of certain additives—carries a reputation for catering to a hipster subset, but an increasing number of wine drinkers in Chicago see it as a tool to introduce wine to a younger, more diverse audience.

Los Naturales is one of several wine clubs at the center of this mission. Started by best friends Oscar Salinas, Adam Jiménez and August Marron, Los Naturales has a shop set up inside Pilsen mainstay Caminos de Michoacan, owned by Jiménez’s family.

Salinas and Jiménez—both Pilsen natives—started exploring natural wine as a hobby when, in February 2020, they got the idea to create a ticketed event in order to share the wines they’d come to enjoy with their friends. The initial event, hosted at Caminos, sold out within a few hours, and focused on “easily approachable” wines shared between family and friends, Salinas says.

Now, joined by Marron, Los Naturales is open as a shop on Saturdays and Sundays (the trio have day jobs Monday through Friday) with monthly “Club Naturales” events. The wine selections, Salinas says, are reflective of the group's own journey down the natural wine “rabbit hole.”

“You get a whole different perspective of how wines are actually made with integrity and with respect to the land and to the family that's growing it,” he said. “As opposed to somebody who's kind of hopping on natural wine because it's trendy. I think the key to what we do is authenticity and keeping it real to our tastes and our principles that we started this on.”

The club’s location in Caminos as well as the group’s connection to the predominantly Latino area resulted in an initial crowd that, in large part, reflected Pilsen’s Mexican and Mexican-American population.

“[Initially] it was a lot of people from the neighborhood,” Salinas said. “That was cool because it was bringing in a crowd that's not typically thought of as a wine-drinking crowd, let alone a natural wine drinking crowd.”

The wine club has grown significantly since then, now including many wine drinkers from outside the South Side. Salinas says it’s common for many of their new wine drinkers to be visiting Pilsen for the first time, stopping at Los Naturales along the way to other restaurants and cultural sites in the area.

And amidst waves of gentrification in the neighorhood, Salinas feels that Los Naturales has been able to welcome longtime residents of the area alongside those from elsewhere in the city.

“How we saw it was an opportunity to kind of serve our own community, because now that we've been doing it, we've realized that there is a want for this sort of product or service [natural wine] within our own neighborhood,” he said.

Another Pilsen-based wine club, Bummer Wines, has embraced a similar approach of sharing wines that they enjoy with friends and neighbors in a setting that centers gathering around wine in a comfortable and engaging way.

Started during the summer of 2020 by friends David Rodriguez and Victor Sanchez, Bummer Wines is essentially an online wine club. Members receive two bottles of natural wine selected by the duo every month, and Pilsen residents get free delivery. Their selections also span the globe with a special focus on small, BIPOC producers and Latin American wines.

Both residents of Pilsen, Rodriguez and Sanchez say they were motivated to start Bummer Wines primarily by an interest in natural wines and a desire to expand access to them to the neighborhood.

At first, the duo kept Bummer Wine entirely digital and built a neighborhood-centric membership base, with over half of their members being Pilsen residents. They’ve since branched out into hosting a handful of successful IRL events and now hope to open a brick-and-mortar wine shop somewhere in the neighborhood, Rodriguez says. By meeting online first and getting a sense for their member base, he adds, they’ve been able to get some insight as to how this service might impact the community.

“We definitely try to connect with local community organizations to see how we can either collaborate with other businesses or in ways we can engage with them,” he said. “It’s about how we can help and not take away from the community.”

Moving forward, Rodriguez and Sanchez said, the goal is not to create an enterprising new space to buy hard-to-find-bottles. Rather, to continue building a community that can share ideas, tastes and stories.

“It’s created a space where you can think critically about wine,” Sanchez says, “and not worry about thinking the wrong thoughts.”