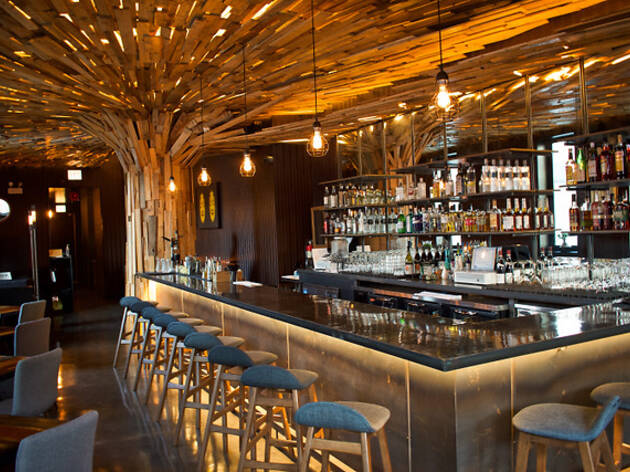 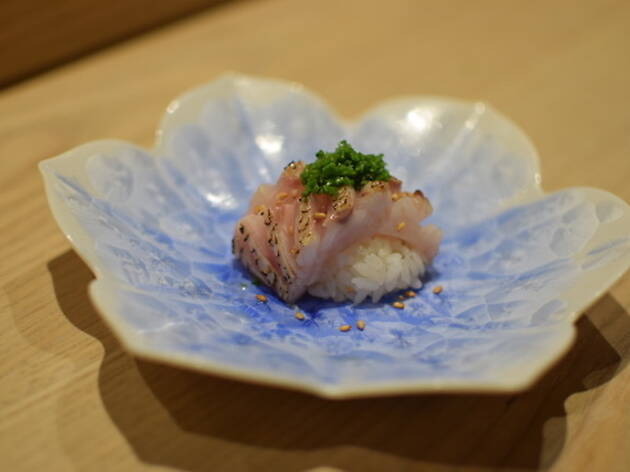 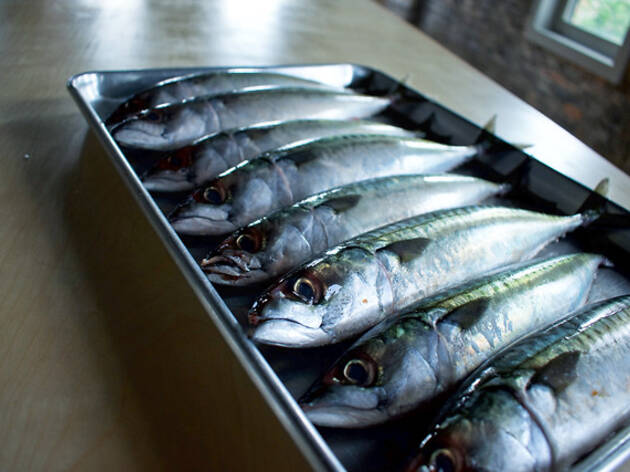 “Have you ever had omakase before?” my server asked at the beginning of a recent visit to Hinoki Sushiko, a two-level izakaya and omakase restaurant that opened earlier this year on a quiet strip along the Elston Industrial Corridor. My date and I were ascending a dim stairwell leading to the second level of the building that's reserved exclusively for omakase dinners, where I’d booked a table for the 15-piece dining experience.

Candidly, I had not had omakase before. The Japanese dining style, which translates to something along the lines of, “I’ll leave it up to you,” allows chefs to curate imaginative, ingredient-driven menus night-by-night, or even course-by-course, if inspiration strikes. It’s also expensive—prohibitively so, for most of my life thus far—often fetching upwards of $120 a head to compensate for the skilled labor and hard-to-come-by cuts of fish (at Hinoki Sushiko, table service runs $150 a person, while the more intimate counter service is $175).

Chicago has experienced something of an omakase renaissance over the past few years, including the Michelin-starred likes of Omakase Yume and Mako. As a first-timer, I figured I could do worse than to put my trust in the hands of chef Otto Phan, who also runs the acclaimed 14-seat omakase restaurant Kyōten in Logan Square. Phan partnered with chef Gustavo Barahona to open Hinoki Sushiko, giving Barahona control of the first floor izakaya (where you’ll find more casual small plates, like chicken karaage and donburi bowls) as Phan helms the omakase operation upstairs.

Like at Kyōten, Phan prepares sushi in the Edomae style, which means the fish, meat or seafood has been treated in some way—whether through aging, smoking, curing or other long-practiced techniques. My server, now aware of my party’s inexperience, explained this patiently ahead of our meal. Each course would arrive in groups of three, arranged to be consumed from right to left, and would progress toward incrementally heavier fare. Counterintuitively, he added, each piece should be eaten fish side down in order to best taste the flavor. We mulled this over while awaiting the first course, glasses of chilled sake in hand, watching servers rush about the expanse of the dining room.

A handful of Chicago’s omakase joints (among them Phan’s Kyōten) haven’t fully reopened yet, in part because of their extra-small dining room footprint. Hinoki Sushiko, which boasts both a 40-person dining room and 8-seat sushi counter for omakase, doesn’t suffer from the same issue, which I’m sure is favorable for socially-distanced business but less so for ambiance. The second floor space, lit with rows of glaring light bulbs overhead, felt cavernous and spare—and not in a way that could be passed off as minimalist chic, mind you. I couldn’t help but wish we were eating downstairs, where a sculptural wooden tree installation (a holdover from Fort Willow, the building’s previous tenant) and moody lighting offered an enveloping darkness perhaps more appropriate for the theater of omakase.

Still, the food! Your menu is bound to look different than mine, but I have no doubt it will offer similar thrills. Tender scallop marinated in fermented yuzu paste and lemon juice, a lightly torched piece of Australian wagyu beef, pillowy squares of sweet tamago omelettes with caramelized tops—I could have never ordered so well myself. And unlike some of the other higher-end dining experiences I’ve had, there was nothing stuffy or intimidating about Hinoki Sushiko. Along the way, our server popped over for conversational check-ins and observations about each course (including a vivid description of the wide cuteness of a certain fish’s eyes, when it’s alive and swimming). “Chef loves this one,” he noted of a particularly oceanic-tasting piece of mackerel. I loved it, too.

The vibe: Two floors of dressy, scaled-back decor, with a decidedly (and confusingly, given the difference in menu prices) more sophisticated feel in the first level izakaya.

The food: Downstairs, izakaya-style bar bites and small plates. Upstairs, an ever-rotating menu of Edomae-style omakase. And don’t worry if you’re an omakase newbie—staff are more than happy to talk you through each plate. A la carte options can be tacked on toward the end of the meal if you’re still feeling peckish.

The drink: Though you can technically choose from a roster of craft cocktails, wine and beer, you’d be best off asking your server to guide you through the restaurant’s voluminous selection of sake, which is available by the glass or bottle.

Time Out tip: After you’ve wrapped up your last course during Saturday night omakase dinners, swing back downstairs for a late-night happy hour (from 9pm–10:30pm) and some sweet sake deals. Thursday and Friday’s happy hour goes from 5pm–6pm.