The 11 best Chicago theaters in the Loop

From opulent former movie palaces to a proverbial church basement, Chicago theater in the Loop is packed with performance spaces

Chicago loves to take the spotlight. Live performances of plays, music, and other fantastic artforms are a backbone of what makes the Windy City a beacon of culture in the midwest. Many of Chicago’s neighborhoods are home to multiple theaters, but only the Loop has the officially designated Chicago Theater District—so declared in 2000 by then Mayor Richard M. Daley to mark the Goodman Theatre’s move from the Art Institute to Dearborn Street and the unification of several of the downtown houses that host touring musical theater productions under the Broadway in Chicago banner. The more theaters that move to the loop, the more new ones seem to keep popping up. These theaters and more make the Loop an inarguable destination for live performance and family-friendly theater. Browse the best downtown theaters and reserve a ticket to see a show today.

RECOMMENDED: Our complete guide to the Chicago Loop 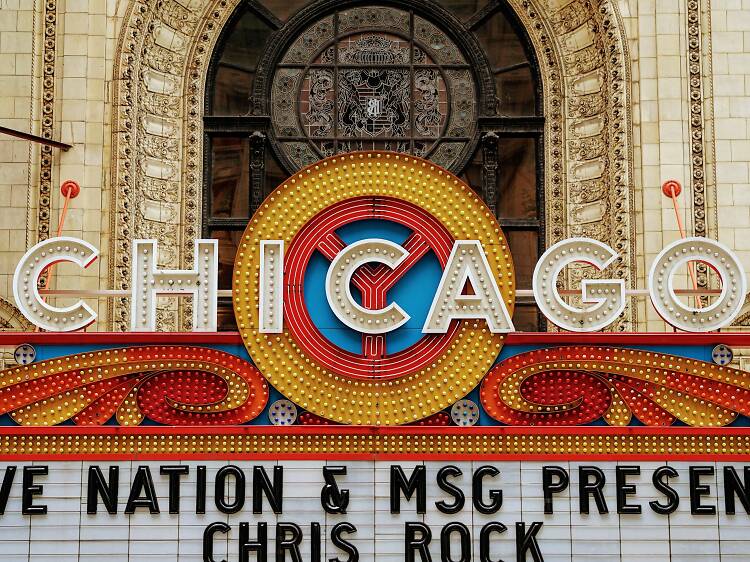 The Loop’s 5,000-seat Chicago Theatre was the opulent French baroque-style flagship of the Balaban and Katz movie-palace chain when it opened in 1921. It’s still a beautiful venue (you’ve probably seen the famous illuminated “Chicago” marquee even if you’re from out of town) that’s surprisingly cozy for its large size. It has also hosted some phenomenal shows: We’ve caught everyone from Mariah Carey to our favorite podcasters here, and we’ve never been disappointed. 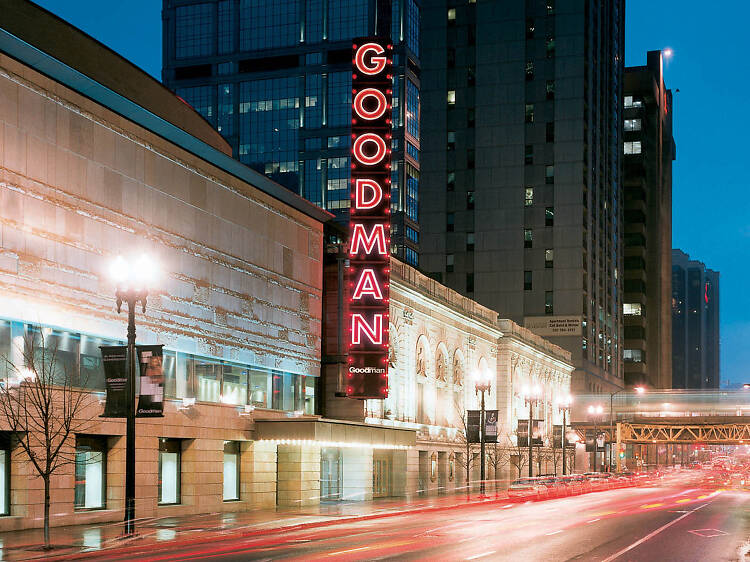 A standard-bearer among the nation’s regional theaters and the downtown grand pooh-bah of Chicago’s professional scene, the Goodman is helmed by Tony-winning director Robert Falls. Falls’s hallmark productions of American classics (Death of a Salesman, Long Day’s Journey) are indicative of the Goodman’s mainly deluxe-but-traditional fare. Yet a commitment to ethnically diverse programming sets it apart from its contemporaries. There’s also a doozy of A Christmas Carol every winter. 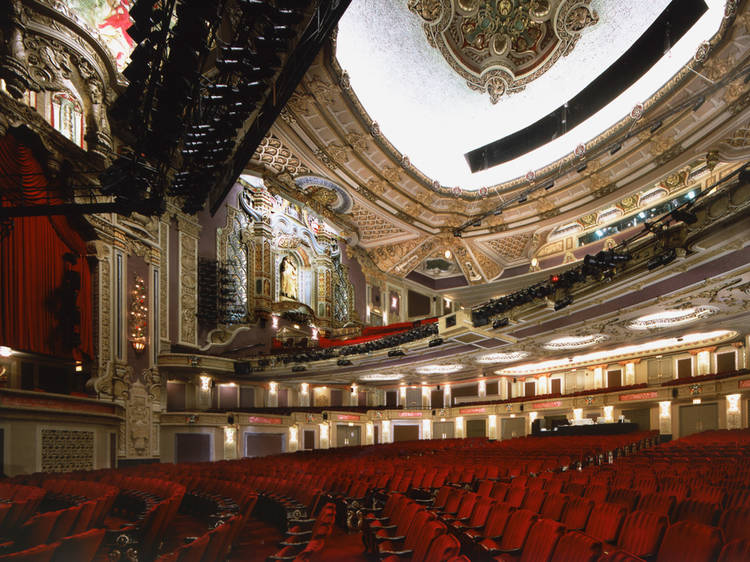 The gorgeous, Rococo Oriental, like the Cadillac Palace down the street, was designed by the Rapp Brothers in the 1920s. It fell into disrepair by the ’80s before being restored as part of the second Mayor Daley's initiative for a downtown theater district and reopening in 1998. The venue was locked up not too long ago with a four-year run of Wicked, but it’s now back in the regular rotation for Broadway in Chicago’s touring shows. 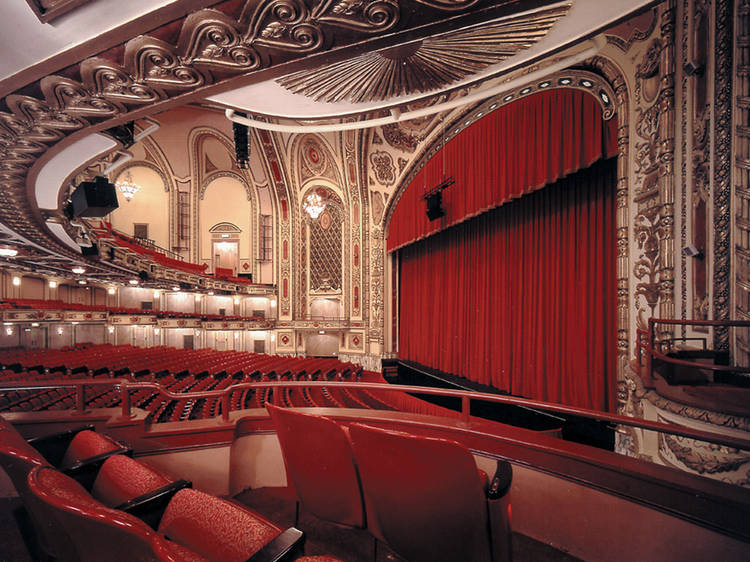 The 1926 Palace Theatre was originally the Chicago home of vaudeville’s Orpheum Circuit. The 2,500-seat venue also spent time as a movie house, a hotel banquet hall and a rock venue before being refurbished and restored in 1999 as one of Broadway in Chicago’s lead theaters for tours and tryouts. 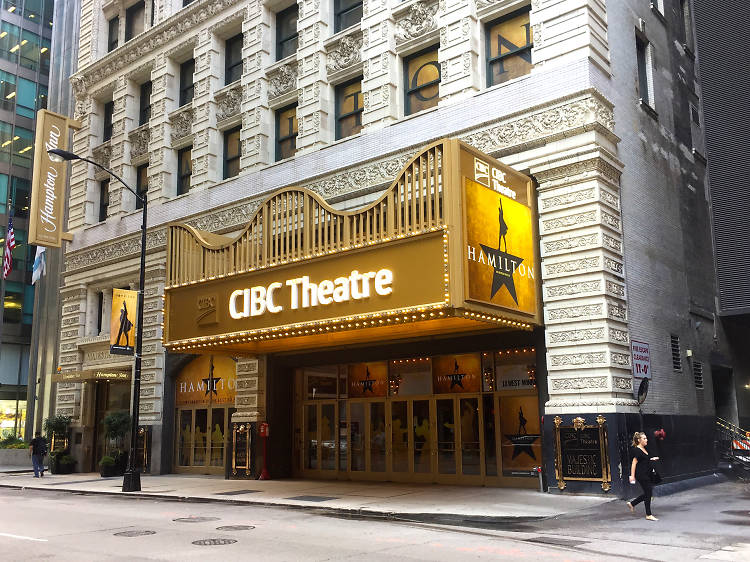 The coziest of Broadway in Chicago’s downtown houses, the former Shubert Theatre (and, more recently, the former LaSalle Bank Theatre and Bank of America Theatre and PrivateBank Theatre) was spectacularly renovated before reopening in 2005. Although it mainly features national tours of shows that have already played New York, it occasionally hosts pre-Broadway tryout engagements such as Spamalot and Twyla Tharp and Billy Joel’s Movin’ Out; it’s currently the Chicago home of Hamilton. 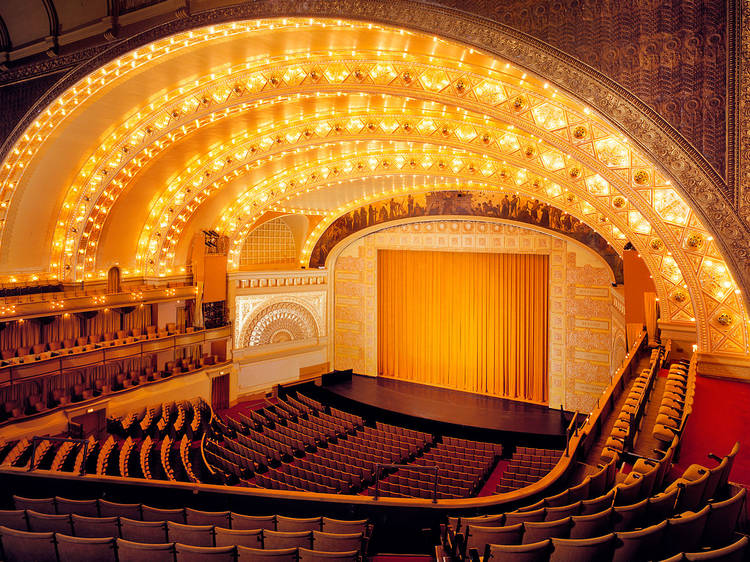 The National Historic Landmark Auditorium Theatre opened in 1889 and is still considered a stunning piece of architecture (it was designed by Louis Sullivan and Dankmar Adler, with a young Frank Lloyd Wright assisting as a draftsman). Boasting excellent acoustics and sight lines, the theater hosts shows and events of all genres, including Broadway hits, slam poetry competitions, a National Geographic Live speaker series, international and local dance, and rock concerts (Neil Young, David Byrne and Death Cab for Cutie have all performed recently). Historic theater tours are offered four times a week. 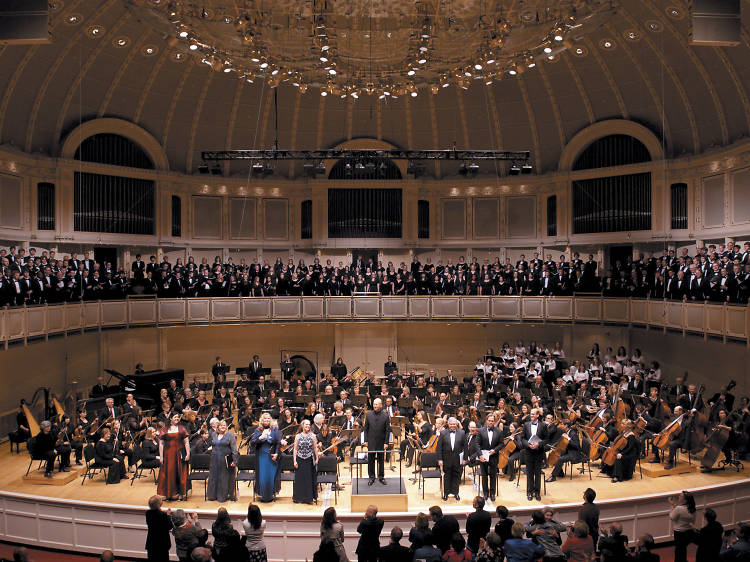 As the architectural centerpiece in Chicago’s classical-music landscape, Symphony Center is appropriately multifunctional. Its primary role, of course, is as the home of the Chicago Symphony Orchestra. The CSO’s main program is supplemented by occasional visits from touring soloists, small ensembles and orchestras; sporadic pop and jazz shows; and occasional concerts from the Civic Orchestra of Chicago (the CSO’s training orchestra for young musicians) and the Chicago Youth Symphony Orchestra. Also on site is Buntrock Hall, an auxiliary space for chamber music; the elegant Grainger Ballroom, which stages lectures and small ensemble performances; plus a learning center, a restaurant (Tesori) and a shop selling gifts and CDs, including many from the CSO’s own Resound label. 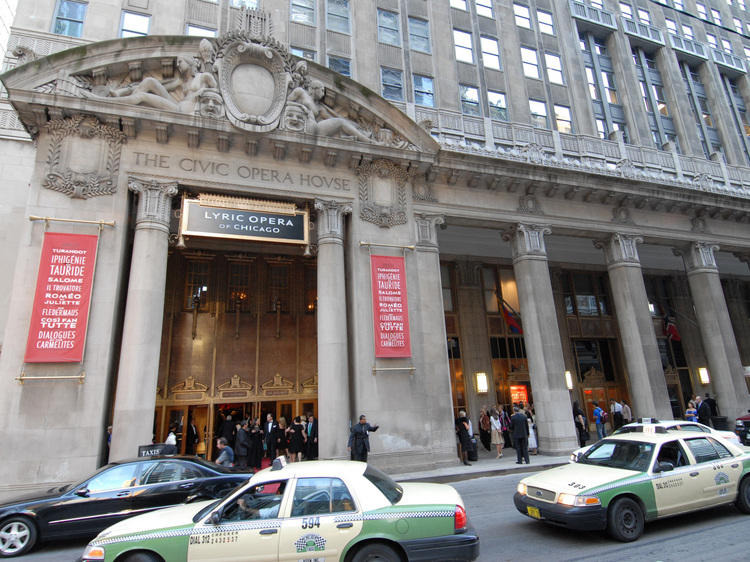 Built in 1929 by business magnate Samuel Insull, the art deco architecture and gold-covered interior design of the Civic Opera House is anything but subtle—a venue for the dramatic narratives that unfold on its stage. The Lyric Opera of Chicago has made the opulent venue its home since 1954, presenting a handful of productions each season. The Opera House has also hosted concerts in recent years by the kinds of pop acts whose ostentation can match the theater’s (Morrissey, the National). 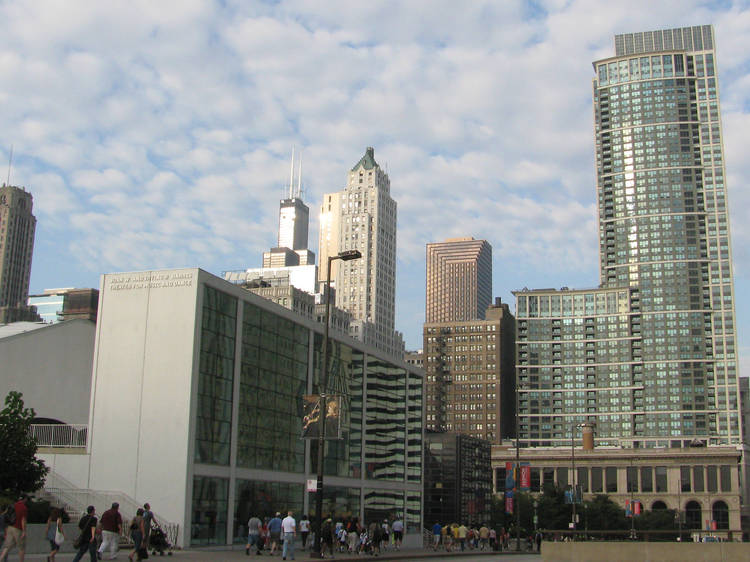 The sleek Harris Theater prides itself on being the area’s least pretentious theater for brand-name acts. The home of numerous forward-thinking new music groups (Fulcrum Point New Music Project, eighth blackbird), Hubbard Street Dance and the Chicago Opera Theater, the Harris is the city’s best mainstream-alternative hall, if that’s not a contradiction in terms. 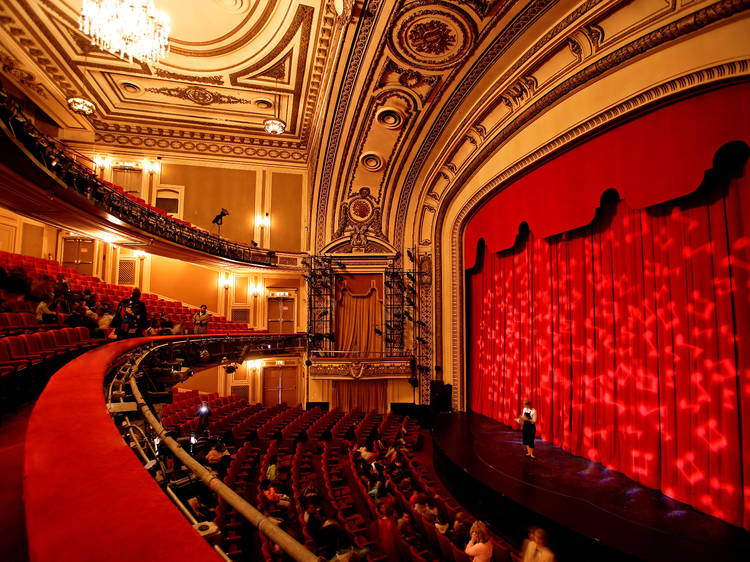 Photograph: courtesy of The Thea

This 1,325-seat proscenium theater was designed by Chicago architects Marshall & Fox in 1910. Under its original name, the Blackstone Theatre, it served as a home for the Federal Theatre Project in the 1930s and hosted the premiere of Lorraine Hansberry's A Raisin in the Sun in 1959, in addition to scads of touring shows. In 1988, it was sold to DePaul University, which renamed the theater in honor of donor Reskin in 1992. The Theatre School at DePaul now uses the Reskin for its kid-oriented Chicago Playworks productions, as well as renting it to other organizations. 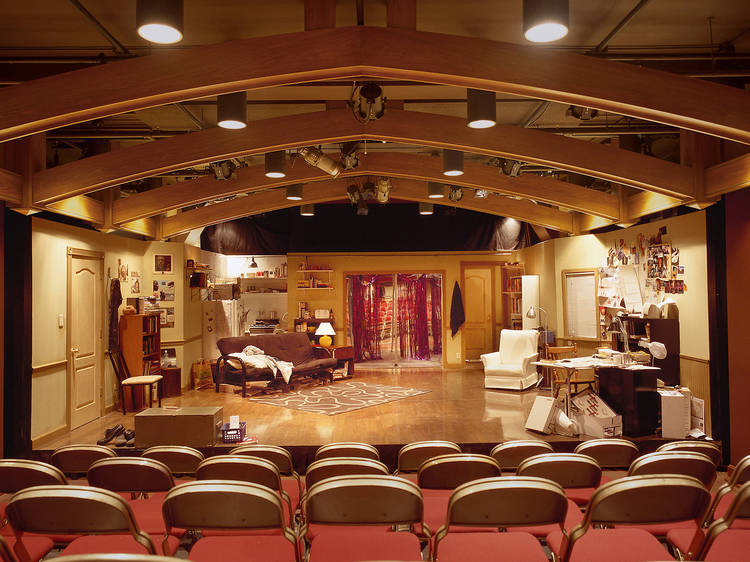 This relatively young company, known for its mission of championing work by playwrights of Asian, Middle Eastern and Mediterranean descent, has a handsomely appointed home in the basement of the historic Chicago Temple Building.