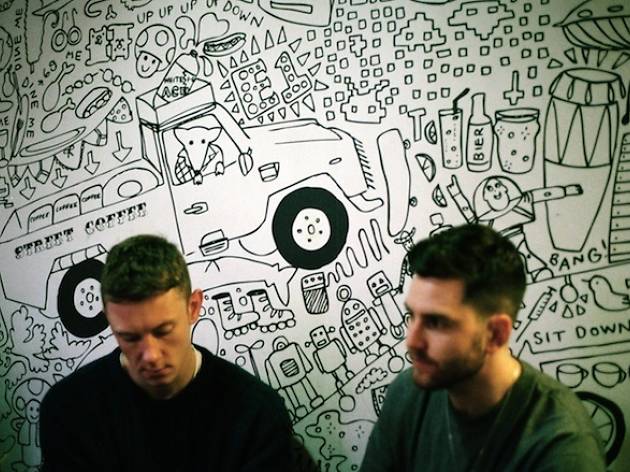 When it comes to names in dance music, irony rules. Deadmau5 is a living human, Girl Unit is just one bloke and Fatboy Slim is, well, neither fat nor slim. In that spirit, the last thing you’d expect Bicep to care about would be their physiques. As it turns out, the Belfast-born duo of Matt McBriar, 25, and Andy Ferguson, 24, owe their friendship to rugged physical exertion, as the latter explains: ‘We met playing rugby when we were eight-years-old. It’s always been part of the culture amongst our friends – some of them played rugby for Ireland. Once we discovered partying, though, rugby got booted out of the window.’ Bicep are one of the hottest names in the world right now. Their irresistibly jacking productions are burning up dancefloors, while they’ve hosted rooms at Fabric, Space in Ibiza and Manchester’s huge Warehouse Project as DJs. After touring America and Australia, they’ll be throwing a party at Oval Space alongside two of the most revered names in the business – eclectic hedonists Optimo and a rare London show from modern disco heroes Metro Area (who play their first live show in a decade). Bicep have also been at the forefront of the revival of deep house music, but more on that later. It’s remarkable that they only decided to make a career from DJing two years ago – after Ferguson and McBriar abandoned successful jobs in advertising and design respectively. ‘We gave ourselves a year,’ says Ferguson, ‘and if we couldn’t comfortably pay rent after that, we’d have 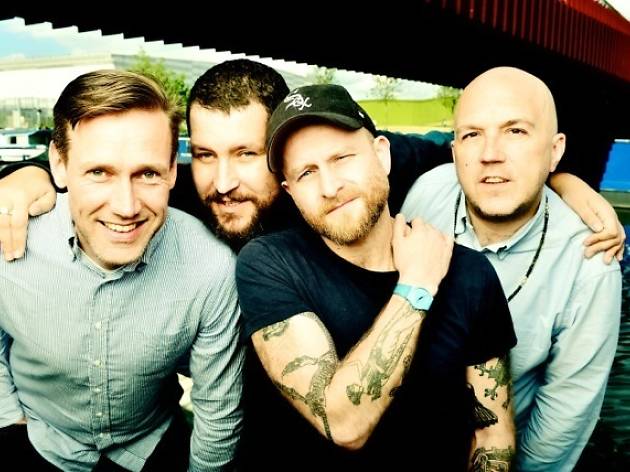 Horse Meat Disco is everything a good weekly club should be: friendly, inclusive, not too pricey and playing music that’s defined yet unpredictable and adventurous. The story behind its success is a simple one. The four resident DJs who run the Sunday party at Eagle in Vauxhall, London – Luke Howard, Severino, Jim Stanton and James Hillard – didn’t have a grand plan when they started off in 2003. Their only aim, a vague one at that, was to veer away from the clichés of other queer nights at the time: music with only two settings (hard tribal house or plastic pop) and a cliquey door policy that often left straight punters out in the cold. Horse Meat flipped that attitude on its head. Although it is nominally a gay night, all are welcome, be they fans of HMD’s weekly radio show on UK's Rinse FM or just men who like to strip off and shake their bits on stage. Disco isn’t the only sound played (soul, funk and house all get a look-in) but it does define the club as much as its tongue-in-cheek logo, the Ferrari horse with a stiffy. As voracious crate-diggers, these guys know their field inside out, and their compilations for UK label Strut are testament to this. As Horse Meat Disco announce a date for Love International, we checked in with James Hillard. Your compilations are always troves of disco oddities. Are you aiming for maximum beard-stroking respect? ‘We would have liked to put in some more well-known stuff, but we can’t unless we sell our soul to a major label. Majors 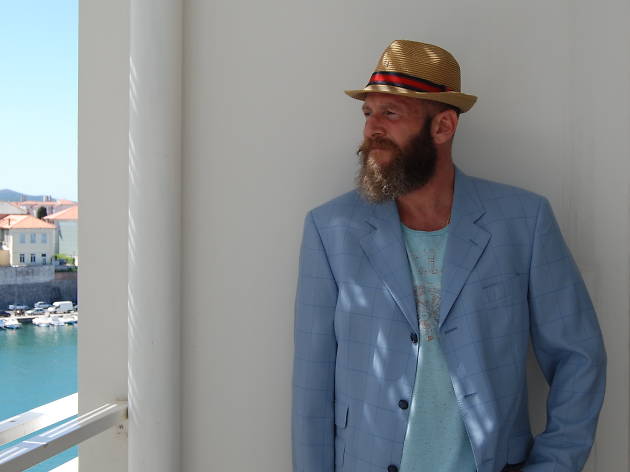 Interview with the organisers of The Garden Festival

This July sees the tenth – and last – Garden Festival at a former holiday camp for oil workers in Tisno. Over a decade, this seminal event has moved from its former base at an abandoned discothèque in Petrčane and helped changed the face of Croatia as a whole. Planeloads of foreigners have partied and come back for more. Some have even set up their own events along the coast and adventurous locals have done likewise. Now Croatia is a festival destination of choice. Time Out checks in with the organisers - Nick Colgan and Dave Harvey, to talk about The Garden, it's last outing in Tisno - and beyond. Nick: ‘It wasn’t an easy decision. When I told Dave and everyone, they all said, ‘You’re joking! We can’t finish it!’ But ten years is a long time to do anything. There are lots of projects in the pipeline. I’d like us to go out on a high. This year will definitely be one to remember.’ Dave: ‘I came to the first one in 2006. I’d been told that some Brummies were starting a rave in somewhere called Croatia. I blagged my way onto the line-up and I was in!’ Music producer and party supremo Nick Colgan founded The Garden club in Zadar in 2005. With years of experience on the road with UB40 and organising parties in Argentina and California, while on holiday Nick had found a lounge-bar location high up in Zadar’s Venetian city walls. Nick: ‘Wherever I go, I’m always looking out for a party venue. The Garden was a spontaneous idea. The owners gave us ten days to decide. I’d never run 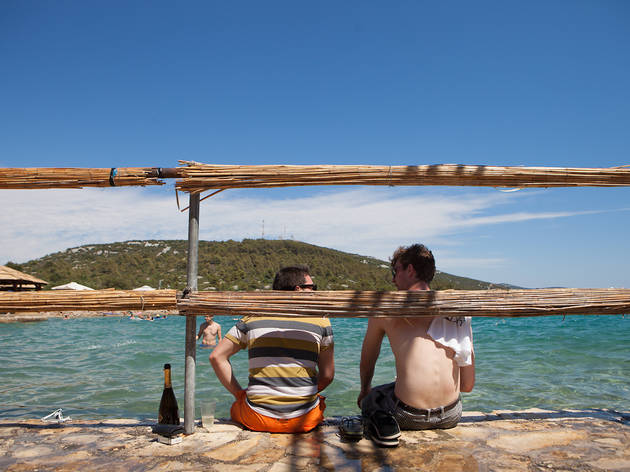 Tisno is named after the narrow passage that separates the island of Murter from the mainland. A town with rich heritage displayed in its Italianate buildings, Tisno is a pleasant option if you just want to get away from the madness of The Garden nearby. The town centre is flanked by a wide seafront promenade busy with holiday makers all summer. The centre stands on the island side, separated from the mainland by a bridge originally built in the 18th century and replaced with a mechanical one in 1968. Local sightseeing mainly centres on churches. The oldest is the parish Church of St Spirit, originally built in 1548 and renovated in baroque style in 1640. Its beautiful tower was added in 1680. Within, the statue of the Madonna with Child is coated with silver and gold. Built around the same time, on the seafront stands the Church of St Rocco, while a visit to the Shrine of Our Lady of Karavaja requires a 214-step climb. Of the many events here this summer, Love International music festival is set in a magnificent natural amphitheatre with gently rolling hills leading down to a private bay, a shimmering sandy beach and crystal clear waters. An undiscovered, secluded paradise a short walk from town, the Garden site has a truly festival feel without losing its intimacy. Accommodation comprises 80 air-conditioned apartments all with balconies or terraces, luxury Indian Shikar tents for glamping and refurbished American airstream trailers. Summer events are broken dow 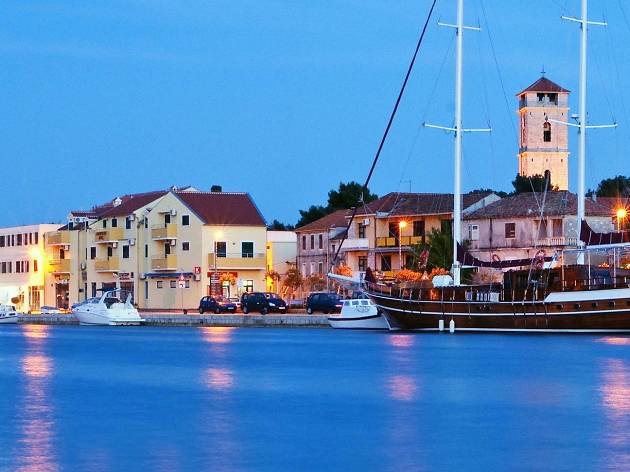 The Tisno restaurant scene is a little sparse, but don't be tempted by the tourist traps lining the bay, because Tisno is blessed with some great culinary spots. These tend to be seafood-orientated, and take great pride in their fresh, locally-sourced ingredients. Read on for our guide to the best places to dine in Tisno. 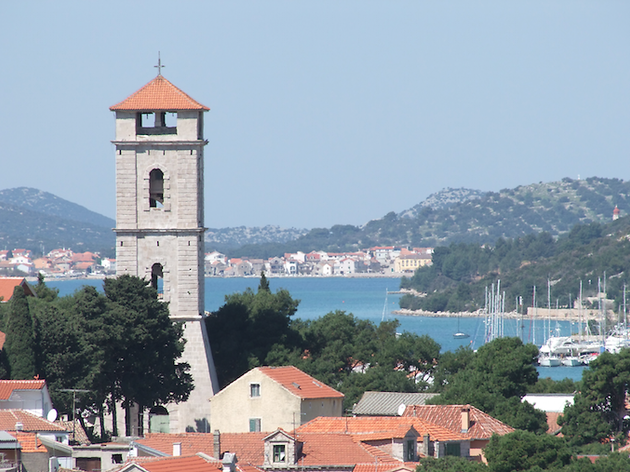 There are only three hotels in the heart of the town, but, however limited, these Tisno accommodation options are decent; the fanciest being Borovnik. 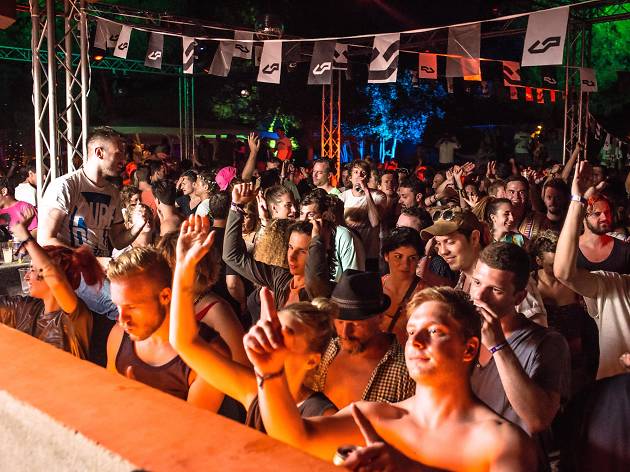 The Garden crew, who have sited many festivals in the verdant grounds of Tisno, have gone on to make a more permanent venue: Barbarella’s Discotheque. The open-air afterhours club was named one of the 25 best in the world by the Guardian in December, and its spectacularly located on a small peninsula on the sea front. 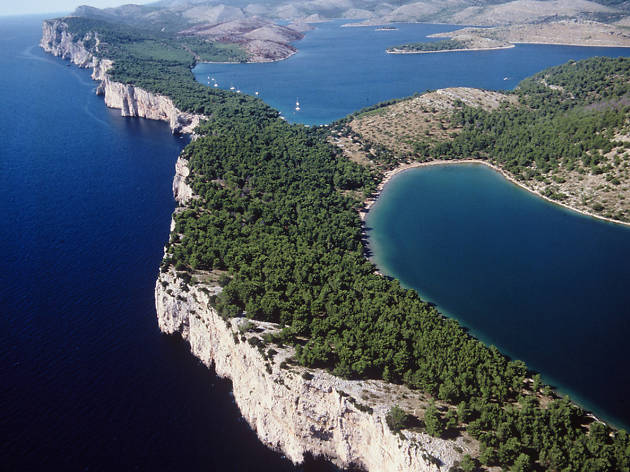 The Kornati archipelago has qualities that make it unique. It is made up of 140 islands and islets in an area only 35 kilometres long and 14 kilometres wide. Between the long, thin island of Kornat, which faces the coast, and the chain of islands on the other side, there is a stretch of water naturally protected from the open sea, with dozens of safe bays to drop anchor. Once you pass through one of the two narrow gates to the north and south, you leave the worst of the waves behind, and enter a strange, other-worldly environment, of treeless hills. The islands on the inside of the national park seem deserted. You might sight the occasional sheep, or a small votive chapel, built by a grateful sailor saved from a storm by the natural barrier of the islands, otherwise there’s little sign of human habitation. It’s a very meditative and minimal landscape, unlike any other island chain in the Adriatic. When you enter Kornati, you’ve arrived somewhere completely different. Whether you have your own yacht, or come on one of the many tour boats offering day trips around the national park, you will also get to experience the outer side of the archipelago. The contrast between the calm inner space of Kornati and the wild world of the open sea is unmistakable, not least in the geomorphology of the exposed rocks. Sheer cliffs offer spectacular scenes and dramatic sounds, from crashing waves to the echo of the human voice. The seaward side of the island of Mana is the most impressive; b 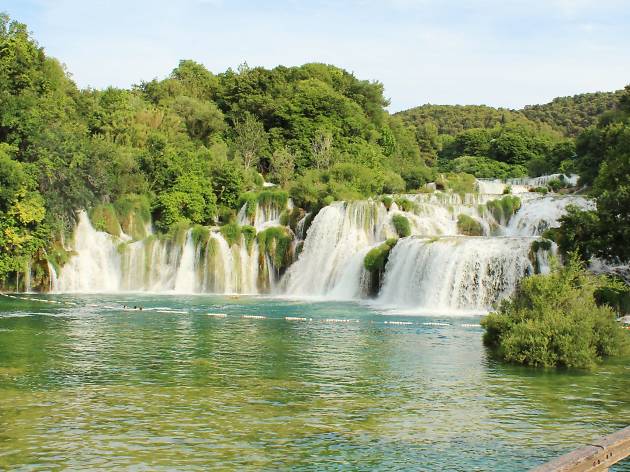 Niagara is the nearest comparison you could possibly make. The 800-metre-long waterfall of Skradinski buk, the picture-postcard main draw of the Krka National Park, leaves onlookers in awe with its 17-step series of cascades. Holidaymakers dip in its pure pools beneath waters crashing down from 45 metres over their heads. But this key attraction, surrounded by boardwalks for easy access, is only one of many in this most versatile and surprising of Croatia’s eight National Parks. By the beautiful town of Skradin, near Šibenik in central Dalmatia, the Krka National Park is named after the 75km-long Krka river it practically encompasses. Krka, like Plitvice, is awash in the marvel and miracle of natural travertine. Where the two differ is the degree of interaction with nature. Where Plitvice has sheer wow power, Krka offers hands-on adventure. To find out, take the riverboat four-hour tour to Roški Slap waterfall. Backdropped by three towns on the riverbanks, 222 bird species, 19 types of reptiles, 18 species of bats and 860 plant types, and rushing tributaries leading to the Krka estuary and the Adriatic, give Krka its flavour. On the way you can visit the park’s strange treasure: Visovac. This man-made isle is home to a Franciscan monastery where monks still reside and where trainees spend a year enjoying occasional games of basketball and greeting tourists with enthusiastic waves. As you arrive back on land, majestic swans swimming past local fishermen in threadbare sw