Given the huge success of Advent in the Croatian capital of Zagreb, it’s no wonder the nation’s second city of Split is keen to tout itself as a destination for Christmas fun and shopping.

Certainly, the prospect of relaxing outside on a sea-facing café terrace before browsing the market stalls and catching a show later might appeal more than ice-skating in the chilly December temperatures up north. And, perhaps even more so than those in Zagreb, Splićani are always up for a party. 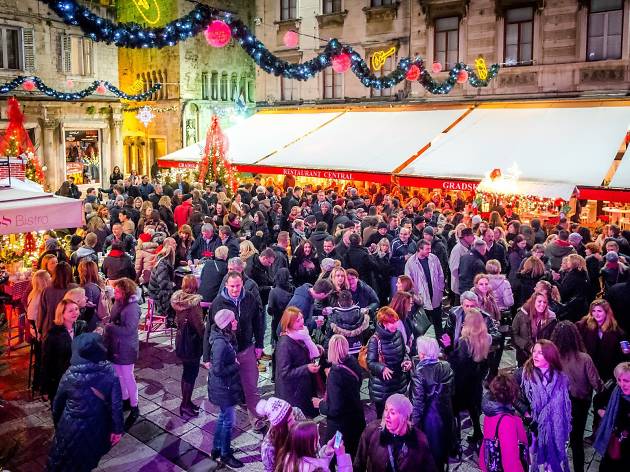 And, like summer here, much takes place on the Riva, the pedestrianised promenade that stretches between the Roman-era Diocletian’s Palace and the Adriatic. Here, from early December until mid-January, rustic wooden stalls are set up under fairy lights, proffering mulled wine, rakija fruit brandy, sausages and other goodies, as well as gifts and souvenirs. Fritule, small fried dough balls and a tradition in these parts at this time, are in plentiful supply.

The party spirit has long been evoked just inside the open gates of the Roman palace, around the focal square of Narodni trg. Before Advent became an organised festivity to attract more tourists in winter, the bars and restaurants lining this picturesque plaza threw regular parties in the run-up to Christmas and beyond. Certainly, this is still the place to come for New Year’s Eve, when locals come and go throughout the day and night to clink glasses, celebrate and look forward to the year ahead. Given the familiarity of the atmosphere, the music on offer doesn’t look to break any new barriers – rather, popular songs from the 1970s and 1980s ring out, plus a whole bunch of singing and dancing among old friends and families.

Behind the palace, by the famous statue of Gregory of Nin, another Advent attraction was opened more recently, an indication of the city’s ambitions to make Split a December destination as well as a July one. Referred to as Djardin, this communal zone by the northern wall stages a more sedate musical agenda, with choirs and classical ensembles.

Along nearby ulica Kralja Tomislava, more stalls offer seasonal treats and presents. One local speciality you’re bound to find whether you’re strolling along the Riva, exploring Diocletian’s Palace or sat here at Djardin: klapa. A form of a cappella singing currently resurgent in its native Dalmatia, it involves a chorus of menfolk, usually four in number, who evoke the maritime heritage of their homeland in harmonious tones. Particularly over Christmas, you’ll see them on street corners, serenading passers-by with a song or two.

Over on Bačvice, the city’s main beach a short walk from Split’s historic centre, young Spličani are still up for games of picigin, a kind of keepy-uppy played with a small rubber ball. In the shallow waters at the shoreline, they pat and kick the ball to one another, the more spectacular the attempt, the better. While in some parts of Europe, a New Year’s Day plunge into freezing water is a bizarre and challenging ritual, here in Split, it’s much more gentle than that – although only the brave actually take to the Adriatic for a fully fledged swim. 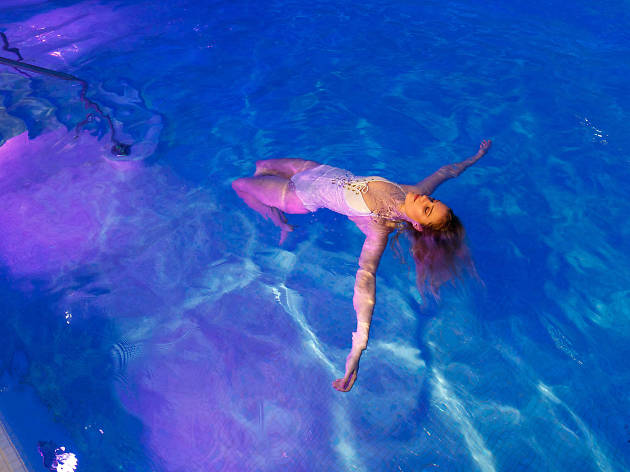 Split’s upscale hotels also push the boat out at Christmas, decking the halls for the season, and offering special menus and spa deals.

Overlooking the Adriatic, the Marvie Hotel & Health provides Recharge and Refresh packages, treatments practised by in-house experts. Right in town, the Cornaro should keep its rooftop Jacuzzi open for that unique experience under the stars, while within, massages, facial and body treatments can be booked.

Outside the city, Le Méridien Lav is where guests can lose themselves at RE:CUPERA, a complete Wellness experience of facials, therapy baths and massages, some designed for couples. A heated indoor pool and infinity pool also await, and with opening hours of 6am-10pm, you can either start the day being pampered before heading for Advent fun in town, or spend the day around the market then relax in expert hands.

For a location right in the historic centre, a short walk from the Advent action on the Riva, with top-notch seasonal cuisine thrown in, look no further than the Marmont Heritage Hotel. Book a stay of at least three nights and they provide a
free transfer from the airport to the hotel, and there are all kinds of early-bird offers. A noon check-out is also a welcome rarity these days.