Rijeka European Capital of Culture 2020 is not just for spectators. The city's community have helped shape the events happening within the year and some of those extend a further invitation for everyone to join in. From the carnival parade and the bell-ringing of the inauguration ceremony to giant robots you can manipulate and art installations you can walk beneath or touch, here are some of the best things to do within Rijeka European Capital of Culture 2020 at which you can all join in.

RECOMMENDED: The best exhibitions of Rijeka European Capital of Culture 2020

The best interactive events of Rijeka European Capital of Culture 2020 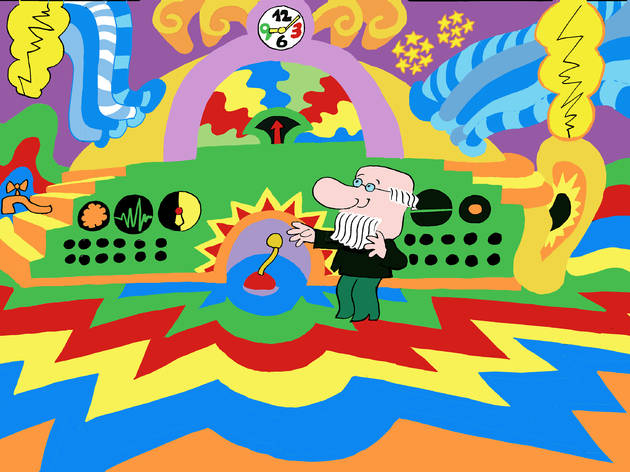 Produced between 1967 and 1978, children’s cartoon series Professor Balthazar was one of Croatia’s greatest cultural exports, enchanting viewers throughout Europe with its charming tales of a loveably eccentric scientist, told in ravishingly colourful style. The imaginary city in which Balthazar lived was largely based on Rijeka, so it’s no surprise that the mercurial beard-stroking Professor plays a significant role in the city’s 2020 shindig.  An old ship, named Uragan (“Hurricane”) will be transformed into a children’s play area decked out in Balthazar-themed décor; and moored on the Molo Longo, the 1.7km-long breakwater that juts across the harbour. There will also be an exhibition, Balthazargrad (”Balthazar-Town”), featuring artwork and sketches as well as an array of hands-on contraptions built in imitation of some of the devices used in the show. 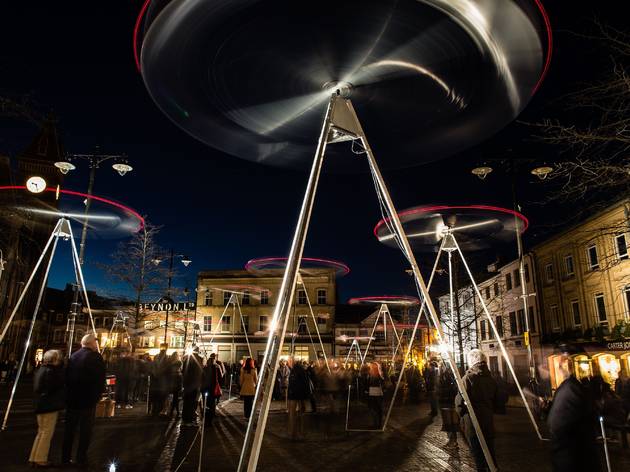 Be spellbound by this monumental creation from British artist Ray Lee. Lee’s utterly unique sound sculptures have earned him international acclaim and spots at festivals across the globe, and in 2012 he won the British Composer of the Year award for sonic art. So what makes his bizarre creations so compelling? Inspired by his what he calls his “childlike fascination with radios, radio waves, magnetism”, they transform urban environments into meditative spaces. Chorus is a prime example. Made up of fourteen huge tripods with rotating arms, each holding a loudspeaker emitting its own noise, it creates an unlikely, other-wordly chorus. It arrives in Rijeka as part of a global tour, having entranced passersby across the globe 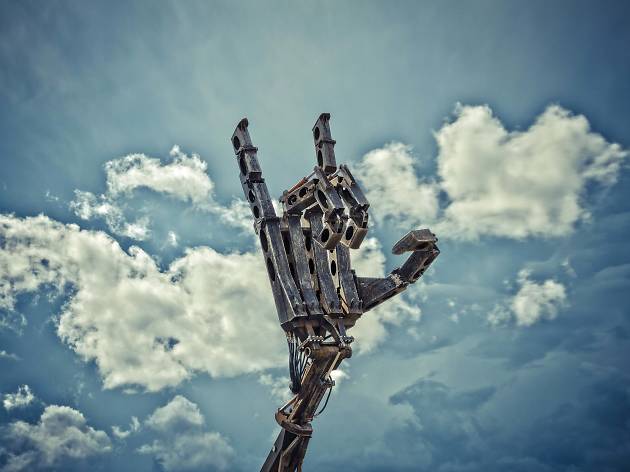 A towering steel structure, this hand is anything but little. Take your turn to put 'the glove' that operates this hand capable of lifting and smashing cars with hydraulic power. In partnership with Zagreb’s Kontejner. 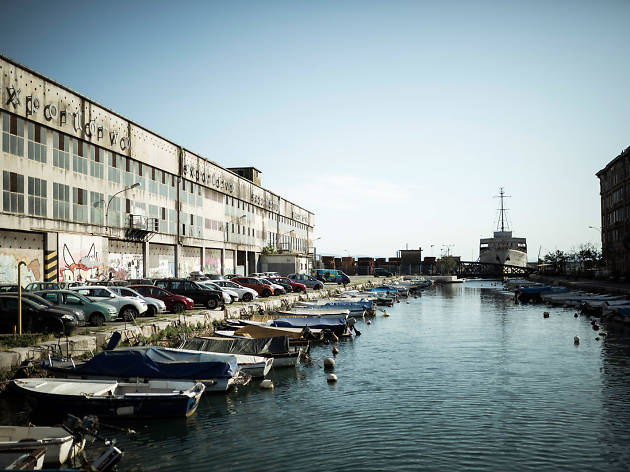 One of the more intriguing events in Rijeka 2020’s busy art programme is this cluster of exhibitions involving local and international artists, each with something offbeat to say about the Adriatic Sea and its future.  If you ever wanted proof that contemporary art is not just a parade of visual delights, but also a laboratory at the forefront of social and technological change, you’ll find it here. The “works” on display include research-based projects and community initiatives as well as more traditional installations and video works. Canadian Bill Vorn brings robots; the Coventry-based trio of Valeria Graziano, Marcell Mars and Tomislav Medak present their research on “pirate care” and the way in which informal communities can help build networks of solidarity; while Nikola Bojić digs up a long-forgotten 1971 report on the environment and breathes new life into its all-embracing picture of the earth’s ecosystem. There will also be an appearance by Jennifer Lyn Morone, the American artist who declared herself a ‘corporation’ in a satirical poke in the eye of mega-capitalism. If you’re interested in shape of things to come in the Anthropocene Age, there may well be a few pointers here. 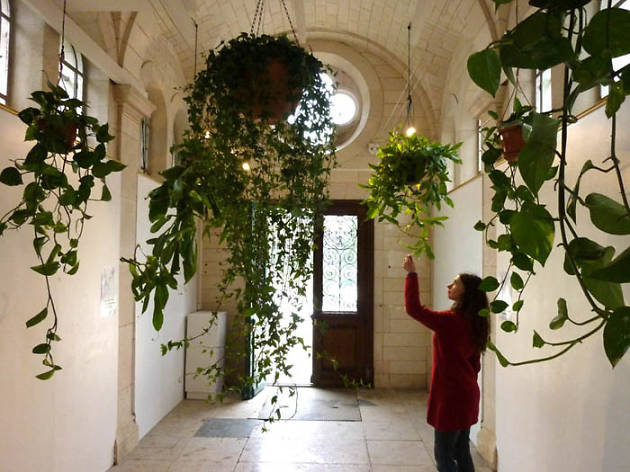 A small garden featuring live music plants that react to touch. Part of the ECC2020 Green Wave programme, Akousmaflore is an interactive and public art installation, a small garden of live musical plants which each reacts to contact in their own way and with their own sound. 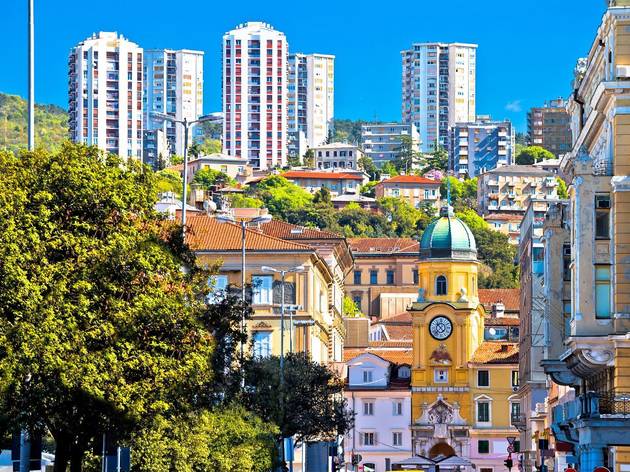 No other city on the Adriatic looks like Rijeka, its residential buildings climbing up the slopes of the nearby Dinaric alps as it has gradually expanded from its port and industry on the shoreline. Rijeka now has a beautiful but thoroughly modern vista, almost like a contemporary continental city which has been planted pre-built by the sea. Some of its largest residential buildings and offices pierce the sky, multiple floors of life and individual lives which are the very heart of Rijeka. In other coastal cities, such skyscrapers are hidden far from the eyes of visitors, their position, out-of-sight in distant suburbs creating an almost ghetto-like town structure and an 'us and them' barrier between residents and guests. Not in Rijeka. In Rijeka, such towers stand unabashed, central to the city, its people and its function. Integral spaces to everyday life, it has been proposed that this embrace should become even closer and, in a city lacking green spaces, that the roofs of such buildings should be utilised to build gardens, areas for socialising and special get-togethers, cultivation or even beekeeping. Primarily for use by local residents, these spaces are open to the public on occasion and this dedicated period extends that invitation with a series of events which will draw visitors to the rooftops of such buildings in the Kozala district. Come and get a unique view of urban Rijeka.

At over 20 years old, Homo si teć is the largest street race for runners in Croatia. More than 17, 000 runners of all ages and abilities now take part in the race and, like the city's famous Carnival, such is its popularity that the bulk of the city centre becomes pedestrianised for the duration of the event. Spectators line the route as runners pass along Rijeka's most famous streets like Korzo, with the race containing not only the traditional citizens’ race but also the Rijeka half marathon, the Hendi Cup and the Ciciban Cup. A great music and entertainment programme accompanies the event, with partying on the streets and around the city centre continuing long into the night. The race's title is a term not in standard Croatian, but in the coastal Čakavski dialect.