The culture vulture's guide to Pula

Festivals of film and electronic music, and concerts by everyone from Elton John to José Carreras, fill the 2000-year-old arena, with its near intact walled ring. Roman remains also form Pula's city centre, dominated by a hilltop Venetian fortress

The beauty of Pula is that it packs in 3,000 years of history and sights, from classic Roman to cutting-edge contemporary, within a space of under one square kilometre. It can be explored in an hour or two. Or, when there’s a festival taking place, a whole day which may well run late into the evening.

The most iconic starting point is, of course, the Amphitheatre, known as the Arena. It was built in the 1st century AD during the reign of Emperor Vespasian, at the same time as the magnificent Colosseum in Rome. But while the Colosseum in Rome all too rarely hosts concerts (and when it does, they’re located outside), the Arena is still very much part of Pula’s cultural landscape. All summer long the biggest names in popular music – Luciano Pavarotti, Elton John, David Gilmour (Pink Floyd), Massive Attack, Grace Jones, Sting – perform within its near intact walled ring. Since 1954, the Pula Film Festival has been held here. In fact, the Arena forms part of its logo, the venue now synonymous with an event that once attracted the likes of Sophia Loren and Elizabeth Taylor. 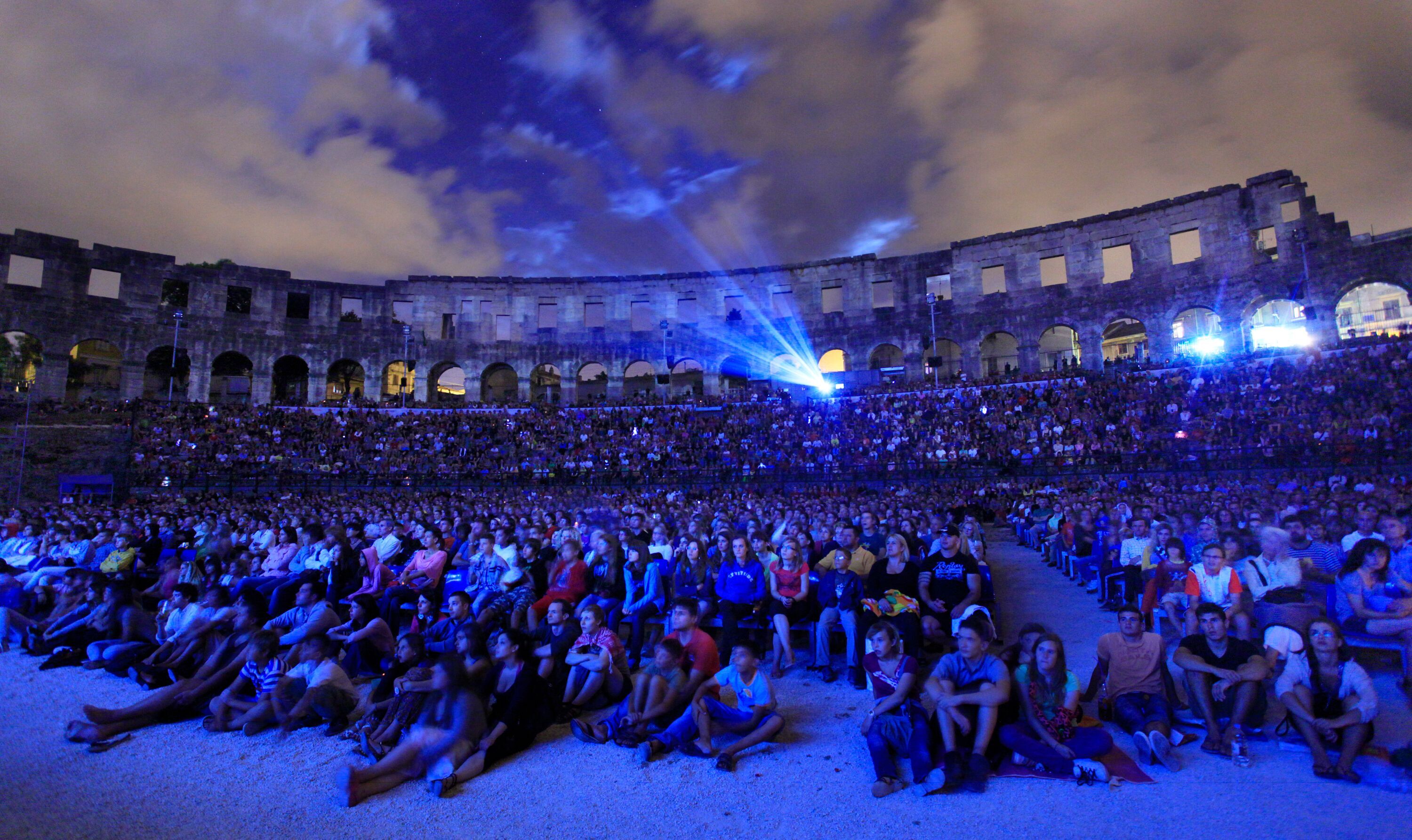 In more recent times, the Arena has also hosted the opening night of the Outlook and Dimensions festivals offer world-renowned acts from the genres of dubstep, techno, hip hop and drum ‘n’ bass.

In 2018, the festival added another site to its roster: nearby Zerostrasse. Accessed along Carrarina, this series of tunnels was built to protect Pula citizens during air raids, originally for World War I but also for World War II. Renovated and reopened, they now provide a unique, atmospheric space for exhibitions, cultural gatherings and parties.

Heading down Carrarina towards the sea will position you near two of the city’s museums, the Olive Oil Museum and the Museum of Contemporary Art of Istria.

Further down Carrarina the other way is the heart of historic Pula, where the Gate of Hercules, the Small Roman Theatre, Twin Gates and the Triumphal Arch of the Sergii are all in fantastic condition. 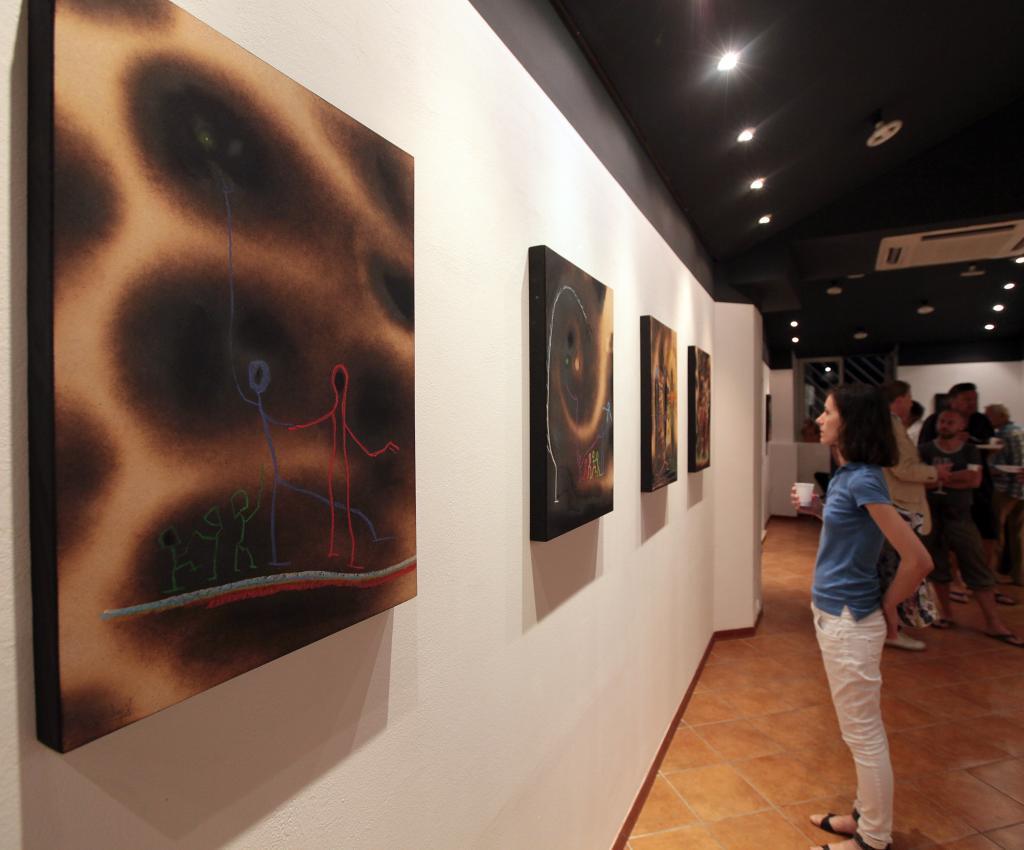 Rising up behind the Small Roman Theatre, the hill that once housed the prehistoric hill fort settlement is the Kaštel. It was later fortified by the Venetians, and now is where you’ll find key cultural institutions such as the Historical & Maritime Museum of Istria, where photographs, maps and videos throw light on Pula’s patchwork past. Also here, on one side of the hill, is the Museum and Gallery Sacred Hearts (Sveta Srca), a stunning and prestigious exhibition space set up in a century-old church.

Underneath the Kaštel hill, the original Roman forum is overshadowed by the Temple of Augustus, which was built around 2 BC, the same time as the first wooden arena was built on the site at which the Amphitheatre stands today.

Here, you’re a few paces from the Communal Palace, which dates from the 13th century and is today used as the town hall or, further around the Forum, The Punishment of Dirce, an incredibly well preserved but violent floor mosaic which was uncovered following bombing of the city in World War II.

Also close is the Uljanik Shipyard, opened by Habsburg Empress Elisabeth, wife of Franz Josef, in 1856. Ships are still being built here today, but in more recent years the dockyard gained an extra dimension when Croatian lighting designer Dean Skira transformed the cranes into a bright, multi-coloured spectacle. Controlled by a sophisticated remote control system, Lighting Giants flashes out some 16,000 colour combinations every evening from dusk until 10pm, and even until midnight in summer. As well as bringing this historic facility into the 21st century, Lighting Giants has helped to popularise the Visualia Festival, the first of its kind in Croatia. In 2019 it celebrates its seventh year. Running over three days in September, Visualia brings international 3D and lighting artists, showcasing the very latest audiovisual technology.

Bringing history full circle, and spanning 3,000 years of human achievement in Pula, as part of the Visualia Festival in 2015, a record number of people participated in creating a Light Postcard within the Roman Arena. More than 4,000 visitors came together to form the world’s largest human torchlit image, spelling out the words ‘Pula + Istria’ in the city’s signature colours of green and yellow.