The history of healthcare in Kvarner

A playground for the holidaying Austro-Hungarian elite, Kvarner was attracting a wellness crowd back in the eighteen-hundreds.

‘Oh to be in the miracle-working southern sun, which is capable of healing every ache of body and soul’. So wrote Austrian traveller Marianne Trebitsch-Stein in Viennese newspaper Neue Freie Presse in 1910. Such words might fall easily from the pages of newspapers today; however they carried a bit more weight in the years before World War I, when a holiday could quite literally be a life-saver rather than a simple matter of hedonistic fun.

Health tourism is nowadays seen as something of a niche, an extra business opportunity for a destination eager to offer a bit more than just beaches and bars. For nineteenth-century travellers, however, health tourism was the whole point of the holiday. Fresh air, stress reduction, sunshine and salty sea breezes were central to the very idea of travel. Europe’s first resorts – whether the spa towns of Central Europe or the society hangouts of the French Riviera – all offered a vacation that could also be considered a cure.

After a relatively late start in the early 1880s, Croatia’s Kvarner Gulf became central to Europe’s idea of a healthy break. It was the nearest bit of the Mediterranean to Vienna and Budapest, the big cities of the Habsburg Empire, especially after Rijeka’s connection to the railway network in 1873.

Opatija, on the northern rim of the Kvarner Gulf, just north of Rijeka, was where Adriatic tourism first took off.  Despite its growing popularity as an aristocratic retreat, it was not much more than a fishing village when Friedrich Schüler, director of the Southern Railway company, started buying up land here in 1882. Opatija had the advantage of being right next to the new railway line, making it the perfect candidate to become the Habsburg Empire’s answer to the Cote d’Azur.

Local doctors had been talking up the health benefits of Opatija for quite some time. Blessed with a unique microclimate that guaranteed mild winters, it was ideally therapeutic on a number of levels, especially for chest infections, heart complaints and rheumatic pains. The air was humid, the sea water had a high saline content, and thick forests of chestnut and laurel protected the village from the worst winter gales.

Pioneering Austrian surgeon Theodor Billroth regarded Opatija as perfect for post-operative convalescence. He persuaded balneology specialist Josef Glax to head up Opatija’s Rest-cure Commission. Glax went on to become the guiding spirit of Opatija’s development as a health resort, as well as the author of numerous Opatija-boosting guidebooks.

The 1880s and 1890s were boom years that saw the construction of hotels, sanatoria and pensions of all types and sizes. Most sanatoria specialized in a wide range of hydrotherapy, filling metal baths with seawater so that their guest never had to leave the premises. Clinics paid special attention to diet, with a particular emphasis on the sour-milk drink kefir, and the so-called grape-cure: the latter was particularly effective in treating people with liver or kidney complaints.  German doctor Max Joseph Örtel, one of the great popularizers of structured walking as a form of therapy, developed graded paths for people with heart problems. Another pioneer was Hungarian doctor Kálmán Szegö, whose Szegö sanatorium had a special block for children – who were encouraged to spend time outdoors doing exercise or playing sports. Szegö banned adult books and magazines from the facility on the grounds that children had to develop minds of their own.

Opatija naturally attracted ambitious young doctors, eager to establish private practices. Success usually depended on bagging a wealthy aristocratic patient, and hoping that word-of-mouth publicity would bring in some more. With such a concentration of doctors, each of which was expected to send their patients home feeling healthier than when they arrived, the town served as a creative laboratory for all kinds of cures. Hungarian doctor Geza Fodor developed a health cocktail he called Marina, a concentrate of filtered seawater with added carbon dioxide that was often stirred into milk. Mihael Sternbach’s pharmacy was something of a cult address in the growing resort, selling unique remedies such as Laurol, an extract of laurel leaves that could be applied to the skin to ease pain or inflammation.

Another spur to the growth of Adriatic tourism was the alarming spread of tuberculosis in Central Europe, and the belief that warmth, sea air and sunshine could play an important part in its treatment. Weak-chested heir to the Habsburg throne Franz Ferdinand was sent to the Kvarner island of Lošinj in autumn 1895. He continued south to Egypt when winter came – a typical example of how the wealthier segments of society would travel from one rest-cure to another in search of the right combination of climate and rest.

Lošinj was in many ways the laid-back alternative to Opatija. Tourism here revolved around small pensions rather than big hotels, thereby suiting those who preferred peace and quiet to crowded cafes, bandstands and balls. The case of Lošinj also reveals how the Austrians came to regard the Adriatic as an important health resource for their urban population. Baroness Adolfina Hasslinger came to Veli Lošinj to establish the Maria-Amalia home for Viennese girls with scrofula, while renowned spa-doctor Josef Simonitsch also opened a sanatorium in Veli Lošinj which specialized in seawater baths for children.

Both Opatija and Lošinj initially flourished as winter resorts and baths were taken indoors. However the idea of bathing in the sea itself mushroomed in popularity in the decade before World War I, and the character of the resorts began to change. By the 1920s, sunbathing and skimpy costumes became de rigeur, newspapers filled up with adverts for suntan cream, and the beach culture we know today began to take shape.

Health tourism never actually went away, it was just replaced in the popular imagination by the primacy of the beach. The seaside health resort of starting receiving 1906 Unlike the pre-war aristocratic elites and their winter-long health-cures, most tourists of the Twenties and Thirties could only afford a week or two’s holiday in the summer, and the nature of the travel industry changed in order to accommodate this new seasonal rhythm. The idea of the beach holiday was, in any case, a natural outgrowth of the nineteenth-century’s obsession with travel as a form of therapy and healing.

Health tourism remains an important part of Kvarner’s identity today. From the seaside resorts of Crikvenica to Opatija, its hotels still offer a wide range of treatments that fulfil serious medical needs as well as catering for the modern desire for personal pampering. The contemporary interest in wellness weekends and spa breaks is simply the latest commercial expression of a culture that has been around for a very long time. 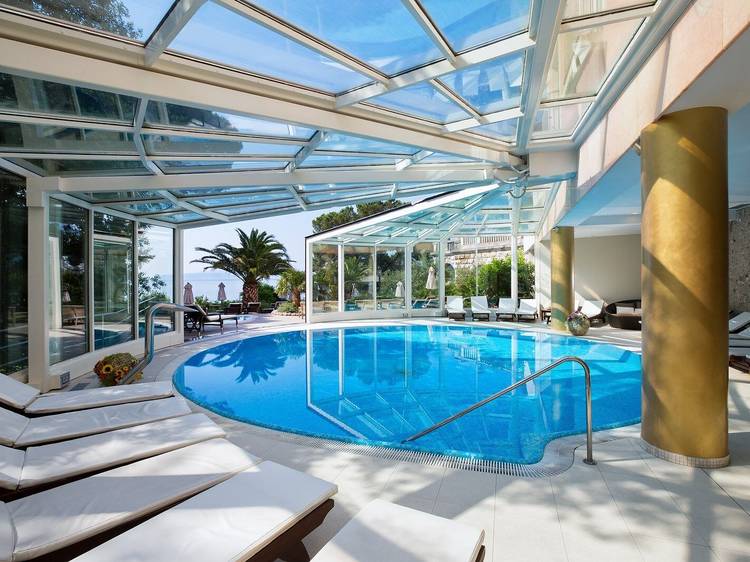 The Kvarner region: health and holiday in the same place

For decades, the Kvarner Region has been a premium destination for holidaymakers enticed by its spectacular natural assets, its adventures and its cultural heritage. A famously long tradition of the highest standard medical,
healthcare and wellness services is a facet of Kvarner shared by almost no other Mediterranean tourist destination. Highly professional staff, the best-equipped institutions and the application of the most modern technology have helped maintain Kvarner’s reputation as
one of the most favourable destinations for medical and cosmetic treatments and dentistry. In particular, it has long held a reputation for the cure and rehabilitation of those suffering from respiratory and heart illnesses. Aside from its large public complexes, Kvarner region’s smaller private
medical institutions help provide a multi-faceted package of medical services; institutions offer stomatologic, orthopaedic or aesthetic surgery procedures. The region’s wellness centres are generally situated in new or renovated, top-of-the-range hotels which offer the latest equipment and highly trained staff in packages which hold highly competitive prices. Such packages focus on programmes for the prevention and healing of illnesses, the maintenance and improvement of health and are run by multidisciplinary
teams composed of doctors, physiotherapists, kinesiologists,
nutrition and other experts. Anti-stress programmes, vitality programmes, massages and also thalassotherapy, seawater and sea air-healing are all part of Kvarner’s year-round health & wellness offer. For those looking for an oasis of peace, a place to rest from the everyday stress or for recuperation, this combination of natural resources, long tradition, quality service and more-than-acceptable prices, are the reasons for which Kvarner is recognised as a leading destination for health and well being. (Content provided by a Time Out partner) 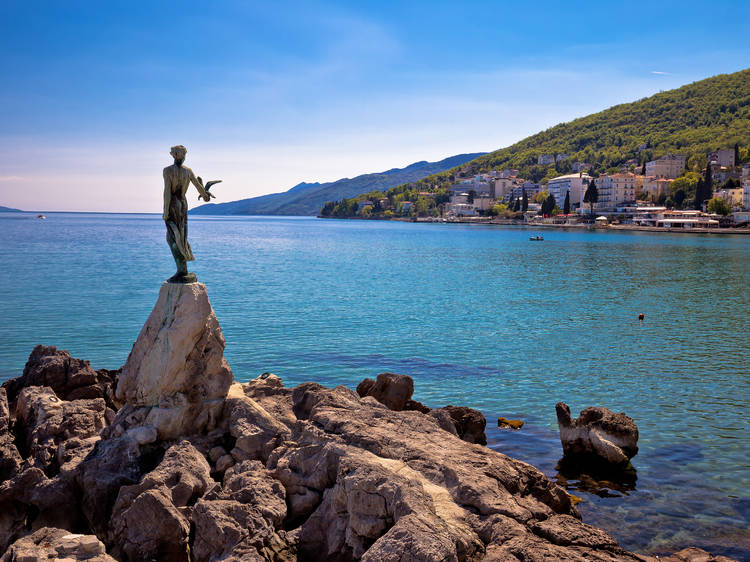 The synergy between Kvarner’s public and private institutions in healthcare, tourism, science, education and transport, make the Kvarner Health Tourism Cluster
unique, not only in Croatia, but also in Europe. The aim of the association is the promotion, development and improvement of the region’s health tourism offer.
This foundation guarantees a warranty, that all those who wish to improve their health and choose the Kvarner region to assist them in doing so, won’t regret it. Instead, they will come to a place where it is possible to achieve a complete
physical, psychic and spiritual wellness - everything that health essentially is. (Content provided by a Time Out partner)