Five key works in 'Goya: The Portraits' at the National Gallery

Francisco de Goya made the most psychologically revealing paintings of all time. As a blockbuster show of the Spanish artist’s portraits opens, we find a man who always looked beyond appearances

For an artist so intimately concerned with the outward appearance and psychological contents of the human head, the strange tale of Francisco de Goya’s own bonce seems as cruelly ironic as it is grimly fascinating. The artist is buried at Royal Chapel of St Anthony of La Florida in Madrid, except only his body rests there: his skull has never been found. Born near Zaragoza, Spain, in 1746, Goya died in self-imposed exile in Bordeaux in 1828. When his body was exhumed for repatriation decades later, it was headless. Rumours abound: that it was kept by a phrenologist with the artist’s consent; that he requested for it to be buried alongside the body of the Duchess of Alba (see right); even that it languished in an artist’s studio for years, only to be blown up by a medical student who filled it with fermenting chickpeas. Such stories add to the mythology that surrounds an artist who, more than any other of the early nineteenth century, taps into the joy, mystery, folly and futility of life, as witnessed in his harrowing 'Disasters of War' series and 'Black Paintings', which he made for his home, Quinta del Sordo (Deaf Man's Villa), on the outskirts of Madrid between 1819 and 1823.

It’s often said that Goya is the last of the Old Masters and first of the moderns. Certainly he straddles not just centuries but epochs – the Ancien Régime, the birth of the Enlightenment, the savage Napoleonic invasion of Spain and eventual restoration of a reactionary monarchy. These turbulent episodes are equalled by seismic events in Goya’s own life, notably the nervous illness that, in 1793, left him deaf.

The National Gallery’s show is the first full-scale survey to focus on Goya’s portraits and it chronicles the key players of the times – royals, despots, politicians, musicians, thinkers. Goya took time to get really good. He failed to get into the Royal Academy in Madrid twice and was 37 before he received his first important portrait commission. He loved money and was obsessed with status, particularly his own, and eventually became painter to three kings. Which doesn’t equate with the kind of flattery you might expect from a portrait painter for hire. Whether he’s painting a prince or a prostitute, Goya can’t conceal that he’s looking with love, admiration, or contempt. He’s credited with being the father of the ‘psychological portrait’, but the chance to get inside Goya’s own head is the biggest thrill of the show. Self-portraits from his career will be hung throughout the galleries, so you’ll get to see the artist looking not just at those around him but also at himself, in times of happiness, sadness and madness. Here are some of the key works on show. 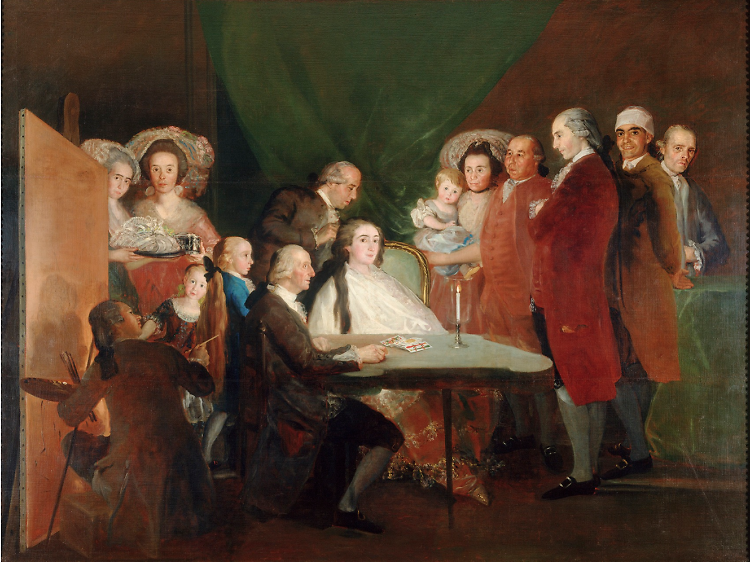 Regarded as Goya’s first portrait masterpiece, this painting shows the family of Charles III’s wayward younger brother, Don Luis de Borbón. María Teresa de Vallabriga, the lady of the house, is having her hair done, while her husband, by this time a frail old man, contents himself with a game of solitaire. They’re surrounded by their children, servants, friends and hangers-on. Goya even paints himself into the scene. Who’s the real subject? It’s hard to tell in such an unruly composition. Goya conjures an atmosphere of candlelit intrigue worthy of ‘Downtown’. Mum has her hair down, the kids are up late, and what’s making the guy on the right break into that cheesy grin? It’s rumoured that, among the throng, María’s lover can be seen. 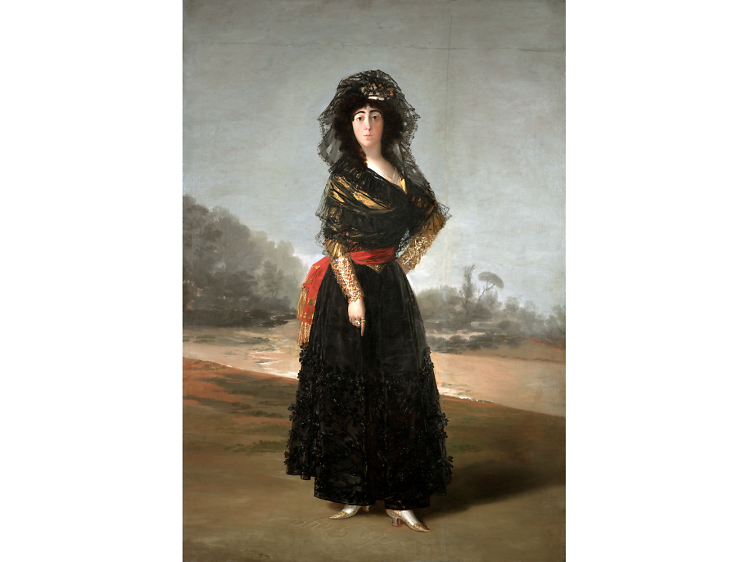 ‘The Alba … barged into my studio yesterday to have her face painted, and went off like that,’ Goya wrote to a friend in 1794. From make-up artist, he quickly became the duchess’s favoured portrait painter and confidante. On loan from the Hispanic Society of America, in New York, this is a pinnacle of Goya’s achievement, and a star of the National Gallery’s show. She stands imperiously with one hand on her hip and the other hand pointing to the artist’s inscription on the sand: ‘Solo Goya’ (‘Only Goya’). Some say this is as proof of a love affair between the two, but it’s more likely to Goya bigging himself up as top painting dog. 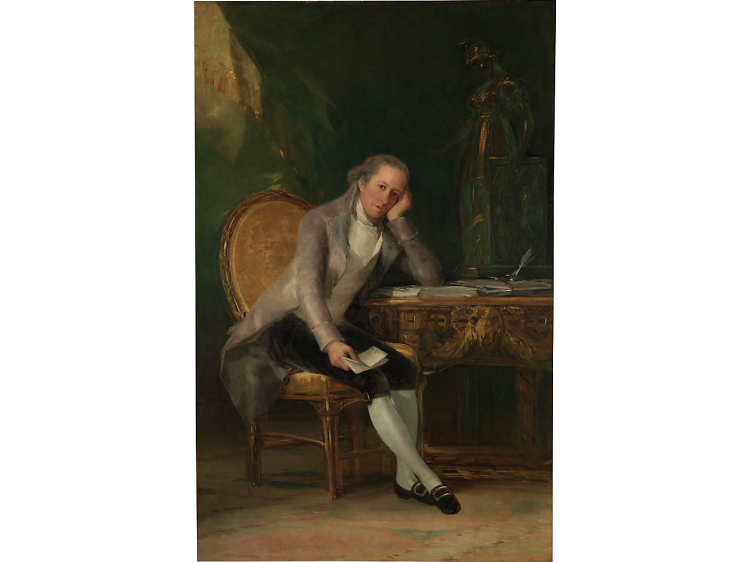 A close friend and leading figure in the Spanish Enlightenment, Jovellanos was minister for grace and justice when Goya painted him here. Minerva, goddess of wisdom, reaches out towards him, but Jovellanos’s pose, with his head in his hand, is one of pure melancholy (borrowed from Dürer). Goya shared his ideals, and perhaps also his sense of burden – five years earlier a serious nervous illness had left the painter deaf. 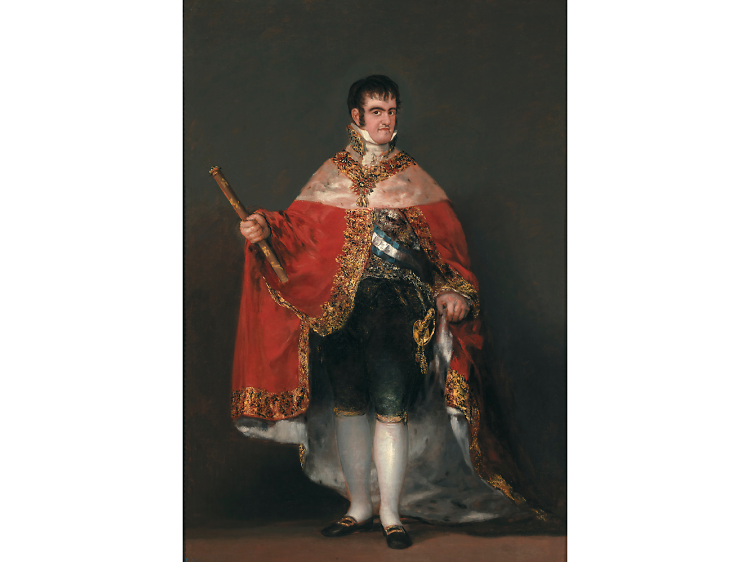 Goya was first made court painter to Charles IV in 1789 then served under Napoleon’s big brother Joseph in 1808. After the expulsion of the French and the return of Ferdinand VII in 1813, Goya retained his position as court painter but he is unlikely to have been a fan of a man who abolished the constitution and reintroduced the Spanish Inquisition. It's a bravura piece, Goya appears to paint the king as a pompous prig with bulbous nose and jutting chin, dwarfed by his robes. If Goya was contemptuous, Ferdi didn’t seem to notice. However, he did employ a more traditional painter who suited his taste, leaving Goya, aged almost 70, to share his position as first painter to the king. 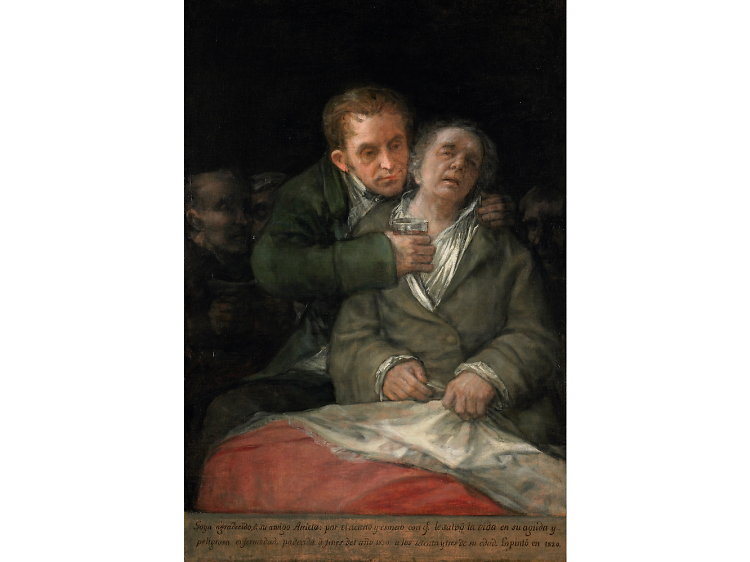 ‘Self Portrait with Doctor Arrieta’, 1820

Here, Goya paints himself after another illness, weakly gripping the bedsheet, his grasp on life apparently slipping away while his doctor administers medicine. Whatever was in the glass did the trick; Goya lived for another eight years, during which he painted his psychologically perplexing ‘Black Paintings’ with total freedom and a psychological intensity that’s obsessed art lovers and psychoanalysts ever since.