Five things we learned from the new ‘Star Wars: The Force Awakens’ footage

The big nerd news over the weekend was the release of three minutes and 42 seconds of behind-the-scenes footage from the new ‘Star Wars’ movie. Now that we’ve wiped away our tears of joy and are able to breathe normally, here are five things we learned from this spectacular clip.

1. The watchword is ‘practical’

Director JJ Abrams and producer Kathleen Kennedy have been banging on about it since day one: the new Star Wars movie will be packed with old-school, in-camera practical special effects. That doesn’t mean no CGI, but it’ll hopefully result in a more down-to-earth, nuts and bolts look than, say, ‘The Phantom Menace’. Just a few of the effects we get a glimpse of the clip include a fistful of great-looking monsters (that sleazy, Hutt-ish beast is our favourite, closely followed by the yellow bumblebee fella in goggles), some real desert explosions and a lot of jerking about in a hydraulic gimbal rig.

There’s nothing cooler than a sleek, steely sci-fi corridor (there are even whole websites dedicated to them, like this one). And it’s great to see that, in the Star Wars universe, the architectural fetish for long, dark hallways didn’t die with the Empire. Whether you’re marching a handcuffed prisoner to his doom or blasting your way back to the docking bay, choose a long creepy corridor every time. And while we’re on the subject, it looks like the Millennium Falcon’s own corridors – much more friendly, softly toned and brightly lit – are still intact, too.

3. Peter Mayhew (aka Chewbacca) is still the coolest man in the universe

He was the goofy oddball on the original Star Wars sets: a seven-foot Surrey softy surrounded by hip young Hollywood gunslingers. And we’re thrilled to see that little has changed in almost four decades. Mayhew is still ridiculously tall, ungainly and loveable. It only makes us adore Chewbacca – who hasn’t aged a day in the new movies, unlike his grizzled co-pilot Han Solo – even more. Oh, and on a side note, Mayhew’s Twitter feed is pretty wonderful, too. Follow him at @thewookieeroars if you haven’t already.

The new footage was always going to be light on plot information, and quite rightly so. But we couldn’t help combing through it for a few details not given away in the trailers. One of the most exciting was some kind of Endor-style stormtrooper dust-up among a heap of blackened woodland ruins (we’re guessing this is the same planet Oscar Isaac flies over in his X-wing in the trailer). Any chance they’ll chuck an AT-AT or two into the mix?

This is deep geek, but the happiest moment for us in the entire clip was that brief shot of an extra in the old GONK robot feet. If you don’t remember the droid in question, it was a little squat thing shaped like a 1970s TV set, which roamed around the Jawas’ sandcrawler making funny little ‘gonk’ noises (it even landed at 39 in our list of the 50 best Star Wars characters on the strength of a two-second appearance).

Here's the video in full: 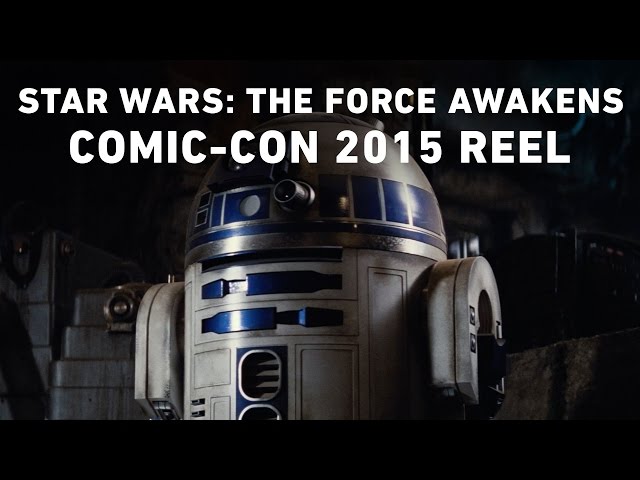