The Tower of London in numbers

By Time Out in association with Historic Royal PalacesUpdated: Monday 7 March 2016, 10:00 am
FacebookTwitterPinterestEmailWhatsApp
Advertising

One of the city's most iconic and most visited tourist destinations, the Tower of London is brimming with history and legend. Built by William the Conqueror, the site grew over the centuries to encompass 21 towers including the famous White Tower, and its history stacked up accordingly. Below we've compiled a whistle-stop tour of the Tower’s past in numbers. So take a moment to soak up the history of one of London’s most important landmarks, in all its macabre and downright odd (beer-swilling zebras, anyone?) glory.

2: the number of princes in the Tower

The story of the two princes is one of the most famous – and chilling – in the Tower’s history. In early 1483, 12-year-old Edward V and his 9-year-old brother Richard were sent to the Tower at the behest of their uncle, the Duke of Gloucester, supposedly in preparation for Edward’s ascent to the throne. By July of the same year, the princes’ claims to the crown were deemed illegitimate and their uncle was crowned King Richard III. Soon after, the two princes disappeared. To this day, many believe they were murdered by Richard. Their true fate, however, remains a mystery.

A gift from Emperor Frederick II to King Henry III, the lions matched the three lions on the King's shield. They were among many exotic animals to make their home at the Tower over the centuries. Other beastly residents include an African elephant, a polar bear (on a long leash so it could fish in the Thames), a beer-swilling zebra, a cannonball-slinging baboon, a Swedish owl, a grizzly bear named Martin, and monkeys housed in a furnished room. (No, we haven’t gone cuckoo, this is all true.)

6: the number of ravens in the Tower (plus two reserves)

The tradition of having ravens at the Tower dates back many centuries, and in more superstitious times, it was thought to be highly unlucky for the birds to leave the site. So much so that Charles II reputedly okayed the building of Greenwich Observatory in 1675 after being driven, er, raven mad by the pesky birds crapping on his Tower-based royal telescope. More recently, in 1986, a raven named George was ‘sacked’ for attacking TV aerials.

9: the number of days Lady Jane Grey was queen

As Queen Elizabeth II sails majestically into her sixty-fourth year on the throne, spare a thought for poor Lady Jane Grey. The luckless monarch managed just nine days in the hot seat before she was charged with high treason. Later, on Feb 12, 1554, Lady Jane was beheaded – along with her husband – at Tower Green (that is, inside the castle walls). She was 16 years old. 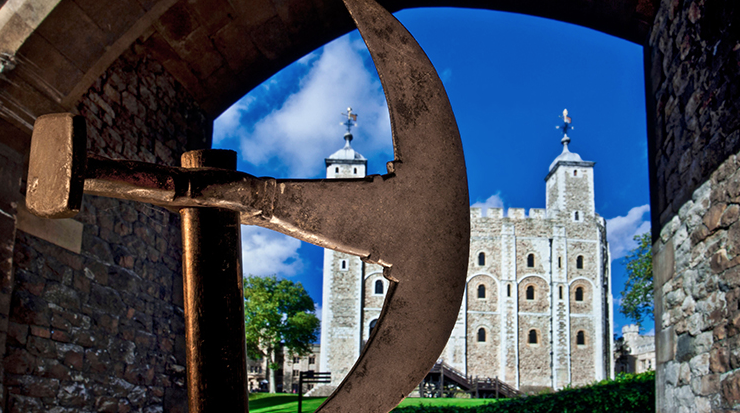 22: the number of executions inside the Tower

Tower Green, where Lady Jane Grey met her doom, has been the site of much fewer executions than its blood-soaked neighbour Tower Hill. In the Tudor era, to be executed inside the castle walls was a ‘privilege’ afforded only to a select few, the most famous example being Anne Boleyn, wife of King Henry VIII, who was charged with treason relating to incest and adultery, and was later beheaded by sword, rather than the traditional axe. Surprisingly, more than half of these 22 deaths occurred during the twentieth Century. In total, 12 spies were executed by firing squad during the First and Second World Wars, the last of whom was German Josef Jakobs, who went to his death on August 14, 1941.

37: the number of Beefeaters at the Tower

Or to give them their correct title, Yeoman Warders. Nobody knows for sure where the nickname ‘Beefeater’ comes from. It may have something to do with the generous meat rations they used to receive, dating back to their formation by Henry VII in 1485. Apart from dressing with serious panache (those fancy uniforms cost upwards of £7,000 to make), their most famous duty is taking part in the Ceremony of the Keys, which happens every night at precisely 9.53pm. And remember those ravens from earlier? Well, they’re the responsibility of the brilliantly named Yeoman Warder Ravenmaster. They just don’t make job titles like that anymore, do they?

159: the number of Constables of the Tower to date

The King or Queen’s official representative at The Tower, the position of The Constable has been in place since 1078 when Geoffrey de Mandeville was first appointed by William the Conqueror. As principal of London’s main fortress, his job and the job of his successors was to defend the Tower of London against attack. These days the role – held currently by General The Lord Dannatt – is strictly ceremonial. But the perks remain excellent. Most excellent of all, we think, is that any horse, pig, ox or sheep that falls from London Bridge into the River Thames becomes property of The Constable of the Tower. Yep, even in 2016.

The Queen's House, where Rudolf Hess was held in 1941

1941: the year the last person was imprisoned in the Tower

During the Second World War, the Tower of London was used as a prison. The highest ranking of those prisoners was Rudolf Hess, Deputy Chancellor of Nazi Germany and Hitler's immediate deputy. He was transferred to the Tower in 1941 for three nights, after being captured attempting to parachute into Scotland. Though Hess is officially the last prisoner of the state to be imprisoned at the Tower, famous East End gangsters the Krays were also briefly detained there in 1952 for failing to report for national service.

2012: the year the Olympics came to the Tower

Sixty years after the Kray twins, a more uplifting guest paid a visit to the Tower – the Olympic flame. As part of the Olympic torch relay, the flame stayed overnight on July 20 2012 and was used to light the lantern for the Ceremony of the Keys. During the Games, the Tower also safeguarded 4,700 gold, silver and bronze medals.

For centuries, the kings and queens of England have kept their crowns, jewels, robes and other valuables at the Tower of London – making it home to more bling than a Kardashian wedding. One of the highlights of the Crown Jewels is The Cullinan I diamond. Weighing in at a hefty 530.4 carats, The Cullinan is the largest colourless cut diamond in the world.

888,246: the number of poppies at the Tower First World War commemoration

In 2014, artists Paul Cummins and Tom Piper created a spectacular art installation to mark 100 years since Britain's first involvement in the First World War. Between July 17 and November 11, a sea of ceramic poppies filled the Tower's moat – a vivid, beautiful tribute to those who lost their lives in the Great War. Each of these flowers represented a single British military fatality – totalling an astonishing 888,246. The poppies were later sold off, raising millions of pounds for service charities.